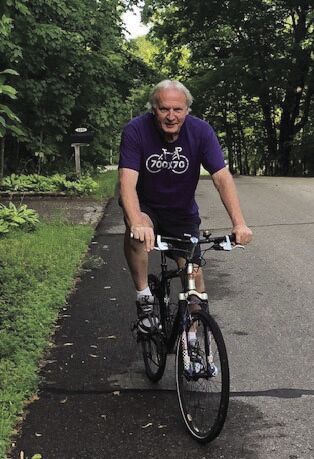 Randy Stinson raised over $11,000 riding his bike around trails in the Orono/Maple Plain area. (Submitted photos by Randy Stinson) 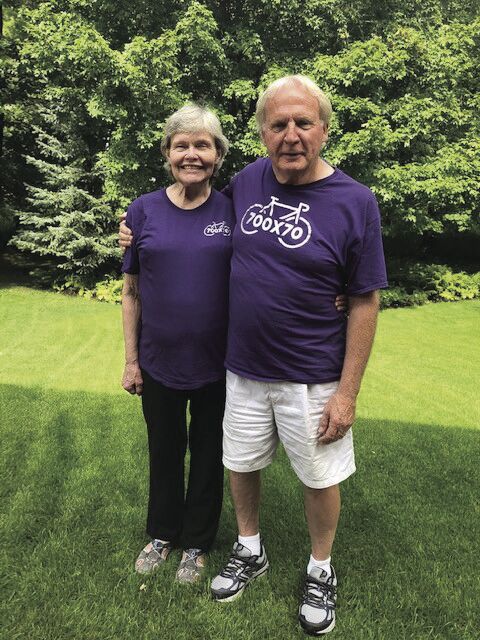 Randy and Sharon Stinson meet when they were 18 years and were married for 48 years. (Submitted photos by Randy Stinson)

Randy Stinson raised over $11,000 riding his bike around trails in the Orono/Maple Plain area. (Submitted photos by Randy Stinson)

Randy and Sharon Stinson meet when they were 18 years and were married for 48 years. (Submitted photos by Randy Stinson)

Randy Stinson never imagined himself as a advocate.

But when your wife of 48 years is diagnosed with pancreatic cancer and you want to do something to help others going through what you are going through that’s what you become.

For Maple Plain’s Stinson, his way to become an advocate and help was on his bicycle.

It all started in February 2019 when his wife Sharon was diagnosed with pancreatic cancer after not feeling well for a couple months prior to that. After batting the disease with chemotherapy, radiation and surgery, Sharon passed away on Nov. 21, 2020.

While Sharon was battling pancreatic cancer, Randy wanted to help anyway he could and decided that he would try to raise money for the Pancreatic Cancer Action Network (PanCan), an organization that offers assistance to patients and caregivers and raises money for pancreatic cancer research with his 700x70 bike riding goal.

“I decided one night I’m going to try to do something that will help other people that have to go through this,” Stinson said. “On July 2, 2020 I was awake at 3 a.m. wondering if I could do something to raise awareness and money for pancreatic cancer research. I checked my bike odometer and realized I had ridden 340 miles. After a quick calculation I decided I could ride an additional 360 miles by my 70th birthday on Aug. 17.”

He started to bike between six to 25 miles, four or five days a week on the many trails around the Maple Plain, Independence, Long Lake area like the Luce Line, and Baker Park to raise money. He had a modest goal of raising $1,770 by his birthday on Aug. 17.

“I started with a group of people, probably around 35, that I asked for money which I have never done in my life,” Stinson said. “When that started happening they started going to other people and it kept growing.”

“I would feel guilty if I wasn’t riding,” Stinson said.

A knee replacement surgery a week after his birthday stopped his bike riding for a while but it didn’t stop Stinson from working with PanCan to advocate for pancreatic cancer research.

Stinson joined in the PanCan Action Week 2021, where every June PanCan works with advocates to deliver a unified message to members of Congress to raise members of the critical role they play in funding lifesaving cancer research.

To kick off Action Week 2021, PanCan made a video on Stinson’s fundraising efforts and Stinson set off to talk with Minnesota members of Congress.

“It is the start of a week of talking to senators and house representatives to try to get them to add money for research for pancreatic cancer,” Stinson said. “I will be part of that. I am humbled to be asked and amazed at the attention I have gotten simply by riding my bike. I look forward to finding a way for earlier diagnoses and a cure for this disease, so if I can help I will do what I can.”

Stinson said he will continue to work with PanCan and raise money and awareness of pancreatic cancer. He has thrown around ideas like holding a golf tournament and silent auctions but has finalized anything yet.

For now, he’s grateful for the 48 years with Sharon and the help that PanCan gave him and his family.

“Wish I would have known about them earlier because they offer so much to both the care giver and the patient,” Stinson said. “They help with finding second opinions, who the best doctors are, how to get tested and what to ask for. All this stuff that we didn’t have a clue about.”