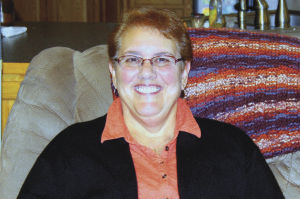 Diane Nelson at her home in Cambridge. Photo by Ashley Haynes 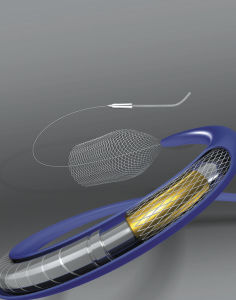 The medical device, Pipeline, that was inserted into Diane Nelson's brain to treat an aneurysm.

Diane Nelson at her home in Cambridge. Photo by Ashley Haynes

The medical device, Pipeline, that was inserted into Diane Nelson's brain to treat an aneurysm.

An innovative medical device is providing physicians with a safer way to treat brain aneurysms.

The Pipeline embolization device is a braided wire mesh cylindrical device that is placed across the neck of an aneurysm, a blood-filled ballooning wall of a blood vessel.

This device saved a Cambridge woman from an aneurysm that may not have otherwise been treatable.

Diane Nelson started experiencing extreme head and eye pain and dizziness in the fall of 2014. Eventually, the pain became so intense, she couldn’t function well in daily life anymore. Her vision became so poor she could not drive safely.

After her eye doctor, who found nothing wrong with her vision, sent her to her primary care provider, who also could not identify a cause, both an MRI and CT scan revealed a large aneurysm in her skull behind her left eye. What Nelson originally thought might be a vertigo problem or a brain tumor was actually identified as a weak spot in a blood vessel, which bulged out and filled with blood, causing head pain and vision problems.

“The thought never even occurred to me that I had an aneurysm. My only experience with somebody (with an aneurysm) was when I was in college,” Nelson said. “I worked on a total care floor in a nursing

home and there was a guy in his 40s who had had an aneurysm burst. He was pretty much helpless in a wheelchair, and when they said ‘aneurysm,’ that’s where my mind went immediately.”

Brain aneurysms develop over time and several factors contribute to a person’s risk of having one, some controllable and some not. Females are more likely to develop them than males and a family history of aneurysms can increase the likelihood of a brain aneurysm. High blood pressure and smoking are contributing factors that can be controlled.

Nelson's surgeon, Josser Delgado, M.D., from Abbott Northwestern Hospital, said many of his aneurysm patients are smokers. It is recommended a patient discontinue smoking as soon as possible after the diagnosis of a brain aneurysm due to the fact that some ingredients in cigarettes damage blood vessel linings.

Before medical advancement made it less necessary, brain aneurysms were often treated with an invasive surgery performed on the brain in which part of the skull is removed in order to access the aneurysm. A clip is placed over the neck of the aneurysm to stop blood flow to it, which causes it to shrink. This method is still being used but fewer and fewer patients are being treated this way.

There are now more effective treatment options for patients, who previously would have been told they had inoperable aneurysms.

Another common method used currently is to insert slinky coils into the aneurysm via catheter to fill a portion (30-40 percent) of the space up, which causes blood clotting and allows the aneurysm to shrink. Sometimes, however, the coils can be pushed aside by pressure, allowing the aneurysm to redevelop over time, especially in larger aneurysms.

In 2011, Pipeline was approved by the FDA for use to treat large or giant brain aneurysms. The device is inserted with stents through the groin area, pulling the device up towards the brain. When placed across the neck of the aneurysm, Pipeline is intended to redirect blood flow away from the aneurysm. As blood flow to the diseased vessel lessens, the aneurysm shrinks over time, healing naturally and allowing the vessel to shut down from the inside out.

“One potential problem that can happen is when you have a very large or giant aneurysm and you just put the Pipeline inside the blood vessel. In the process of healing, it can break and lead to bleeding around the brain,” Delgado said.

By using both Pipeline and the coils simultaneously, treatment of larger aneurysms has the highest chance of being successful. The coils allow the aneurysm to stabilize while the blood vessel heals around the Pipeline, putting less strain on the blood vessel walls and decreasing the likelihood of rupture.

“(Pipeline has) given us a very, very valuable tool to treat people with brain aneurysms,” Delgado said. “(It is a) huge advancement in our field for endovascular treatment of aneurysms. It has allowed us to treat aneurysms that were not treatable before.”

Nelson had surgery in December 2014 using a combination treatment of both the coils and Pipeline. She spent a month prior to surgery taking medication to balance her blood platelets so that the Pipeline would perform optimally.

“It’s a foreign body to the platelets, which think your blood vessel is injured. They start sticking to the device we put in and it can cause clotting, which can cause the device to shut down and (cause) stroke,” Delgado said.

Nelson started her adult career as a microbiologist working in cancer research and at the Mayo Clinic. When her son, Jay, was born on the autism spectrum, she decided to spend her time providing child care as well as caring for him and teaching piano lessons. Later in life, she felt the calling to become a pastor and went to seminary.

Nelson has been in the ministry for 14 years, though is currently on leave to spend time with her family, help raise her grandchildren and recover from surgery fully. She had a grandchild born the week before her surgery, which kept her spirits and hope high.

“I said, ‘Please get me through this. I just had a grandchild born; I want to watch her grow up,’” she said. Nelson’s daughter made her a picture book of family photos because she had told her the last thing she wanted on her mind before going into surgery was her family.

The actual procedure can take anywhere from 30 minutes to a couple of hours, depending on the patient’s vein structure and severity of the aneurysm. Lasting effects and healing after surgery can vary. Nelson, for instance, has gained her vision back. She suffers from minor headaches that she now treats with only Tylenol, rather than the steroids she was on immediately after surgery.

Nelson said her recovery was difficult and lengthy. Immediately after surgery, she experienced sensitivity to light and had trouble focusing both of her eyes at once. Her left eye became droopy and difficult to control.

“The only thing I could do comfortably was to go to a movie theater where it was dark,” she said.

The clotting around the aneurysm caused Nelson some head pain while healing. She went back in June to have a six-month post-surgery checkup, and the aneurysm was almost cleared from her brain with hardly any blood flow to it.

After months of trying to reduce her pain medication and getting violently sick from doing so, she is now, for the most part, back in her old routine. She said the support she received from her family and community as well as her faith was what kept her hopeful.

“I had people praying for me all over the country, the church backing me up, which was incredible. Community is so important. Prayers and love from friends and family meant so much through all of this for me,” Nelson said.

Though the process was long and anything but easy, Nelson is thankful for the medical advancements that allowed her to continue to live a healthy life, which she now appreciates even more every day.

“It was pretty painful but worth it, because I’m alive. I get to see my grandkids. I know God was with me every step of the way. Life is a gift,” said Nelson.