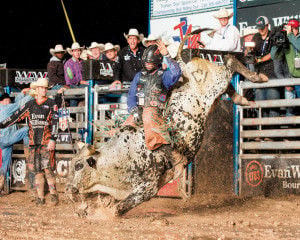 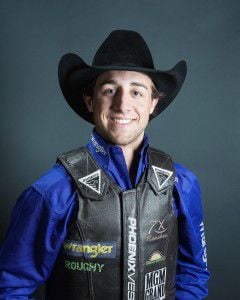 This year marks the 40th anniversary of the Isanti Rodeo, and the Isanti Firefighters Rodeo Association, which organizes the event each year, has wrangled some of professional rodeo’s biggest names to compete.

The Isanti Rodeo will take place next weekend with several Professional Rodeo Cowboy Association sanctioned events over the course of July 8 -10. Each day of the rodeo will also bring with it a number of other rodeo and Jubilee Days events,

including goat tying and mutton busting, as well as live music after the rodeo.

The first Isanti Rodeo took place in 1976. That year it was organized by the Isanti Lions Club. The Lions lost money putting on the rodeo, and they didn’t  intend to continue having a rodeo in Isanti. In 1977, however, the Isanti firefighters took the reins, and they’ve been organizing the annual event ever since.

Rodeo Chairman Tom Pagel has been involved with the rodeo since 1977. Pagel says reaching their 40th year is “a milestone to the firefighters and the community.” The Firefighters Rodeo Association begins planning each year’s rodeo almost immediately after the previous one wraps up.

This year’s rodeo will mark the first time the Isanti Rodeo has hosted a Professional Rodeo Cowboy Association sanctioned Xtreme Bulls event, which is a performance consisting solely of bull riders competing against each other for prizes. Isanti’s Xtreme Bulls performance will also mark the first such event held in the state of Minnesota, and the first such event held in the entire Great Lakes circuit of the PRCA, which stretches across the middle U.S. from Minnesota and Iowa to Kentucky and Ohio.

“It’s 40 of the top bull riders in the world, competing on 40 bulls that are the rankest in the world,” Pagel said.

Among those 40 bull riders are the top four in this year’s rankings, Pagel said. Current PRCA world champion Sage Kimzey is set to compete, as is 2012’s world champion Cody Teel. One bull rider, Brett Stall, is a Minnesota native. Many riders in the Xtreme Bulls event are flying out early to compete in Saturday’s rodeo performance as well.

The Xtreme Bulls performance will take place at 1 p.m. Sunday, July 10, at the rodeo grounds. The Xtreme Bulls will be preceded by live music from Bad Jack from 11 a.m. to 1 p.m.

For this year’s event the Firefighters Rodeo Association hired a new stock contractor after their old contract ended. (The stock contractor provides the bulls to be used for the rodeo, as well as other services.) Pagel explained that their new contractor allowed them to bring trick riders to the Isanti Rodeo for the first time in several years.

Those trick riders, Trey and Dusta Kimzey, are the brother and sister of world champion Sage. Pagel said Trey is also a bull rider, although he is still too young to compete professionally.

“Some say he’s going to be better than his older brother when he’s old enough,” Pagel said.

Sage Kimzey has won the PRCA world championship two years back to back during his first two professional rodeo seasons.

2012 PRCA World Champion Cody Teel is a second-generation bull rider. His father, Robbie Teel, used to ride bulls, which meant that the younger Teel grew up around the sport.

“My mom and dad supported me from the start once they knew I was serious about it,” Teel said.

Teel won the world championship during his second season as a professional bull rider. He does around 100 rodeos a year and estimates that he rides between 150 and 200 bulls each year. He says he likes the emphasis rodeo places on the individual.