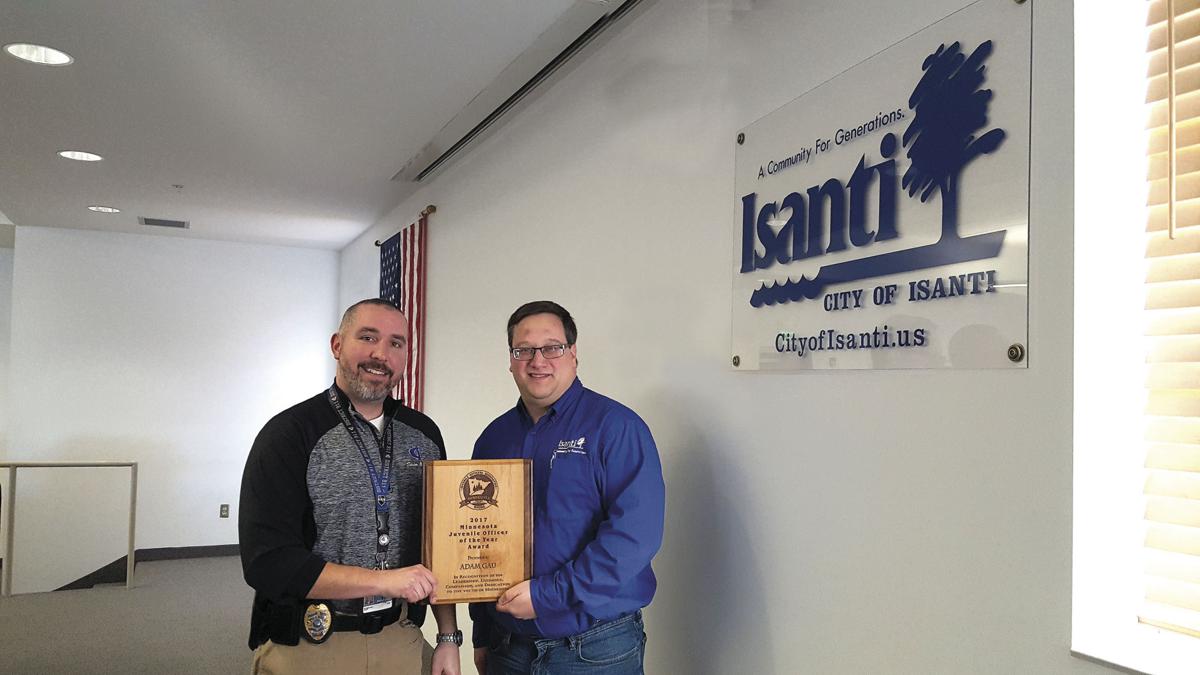 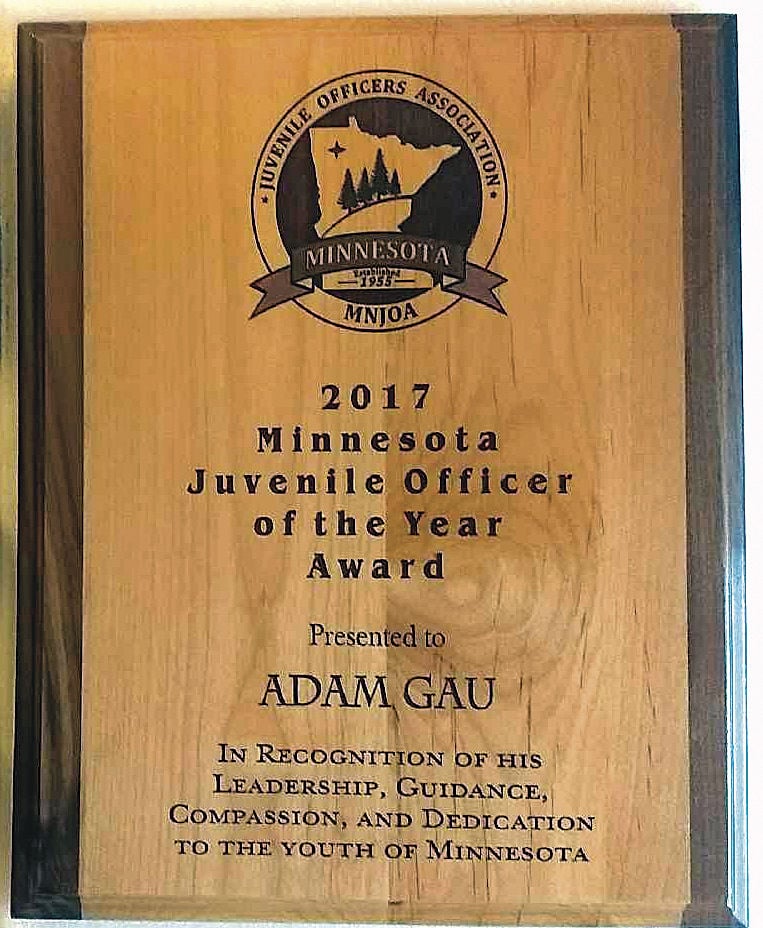 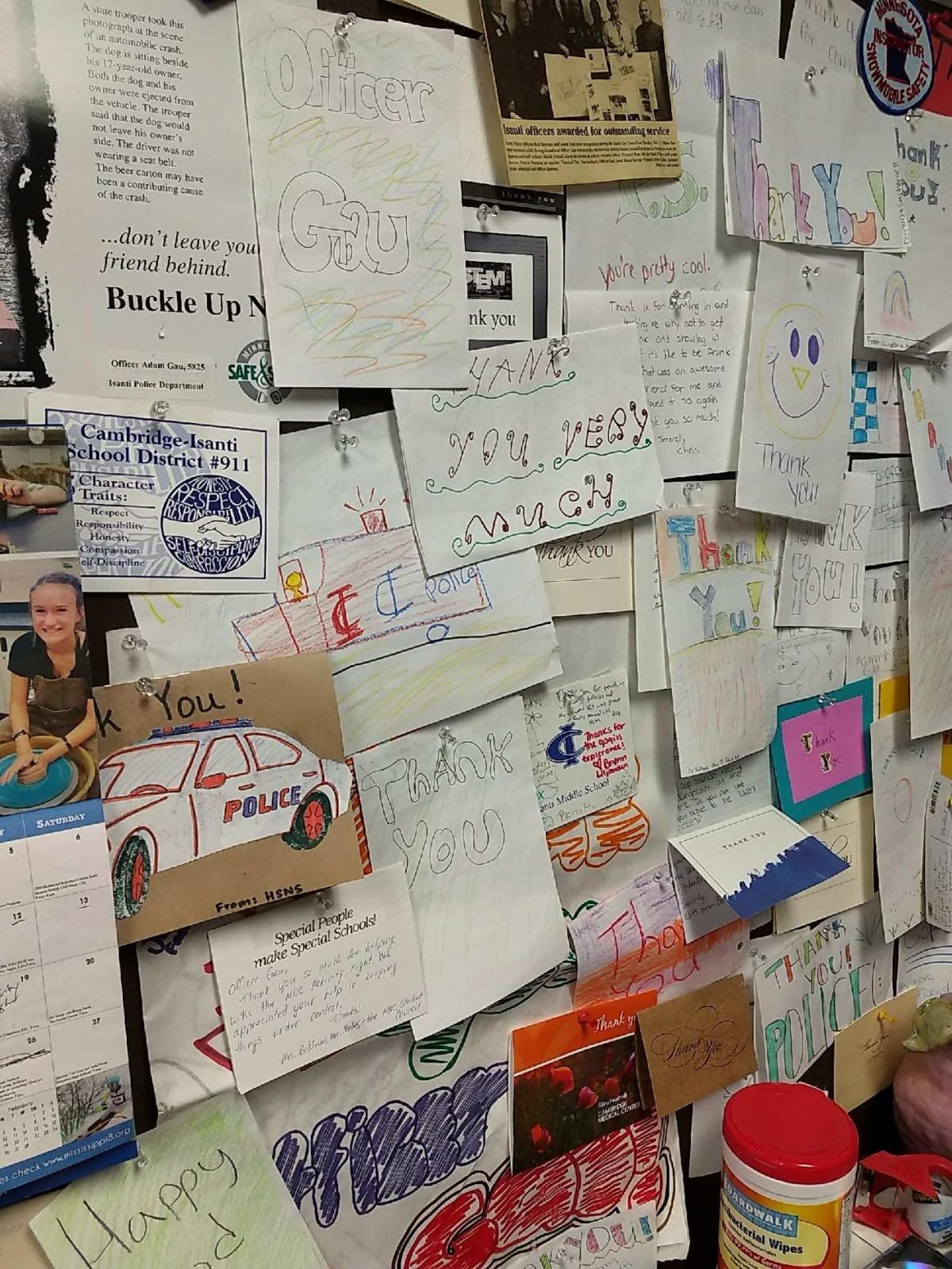 Officer Adam Gau’s office and desk drawers are filled with thank you notes from students he has helped throughout his career. 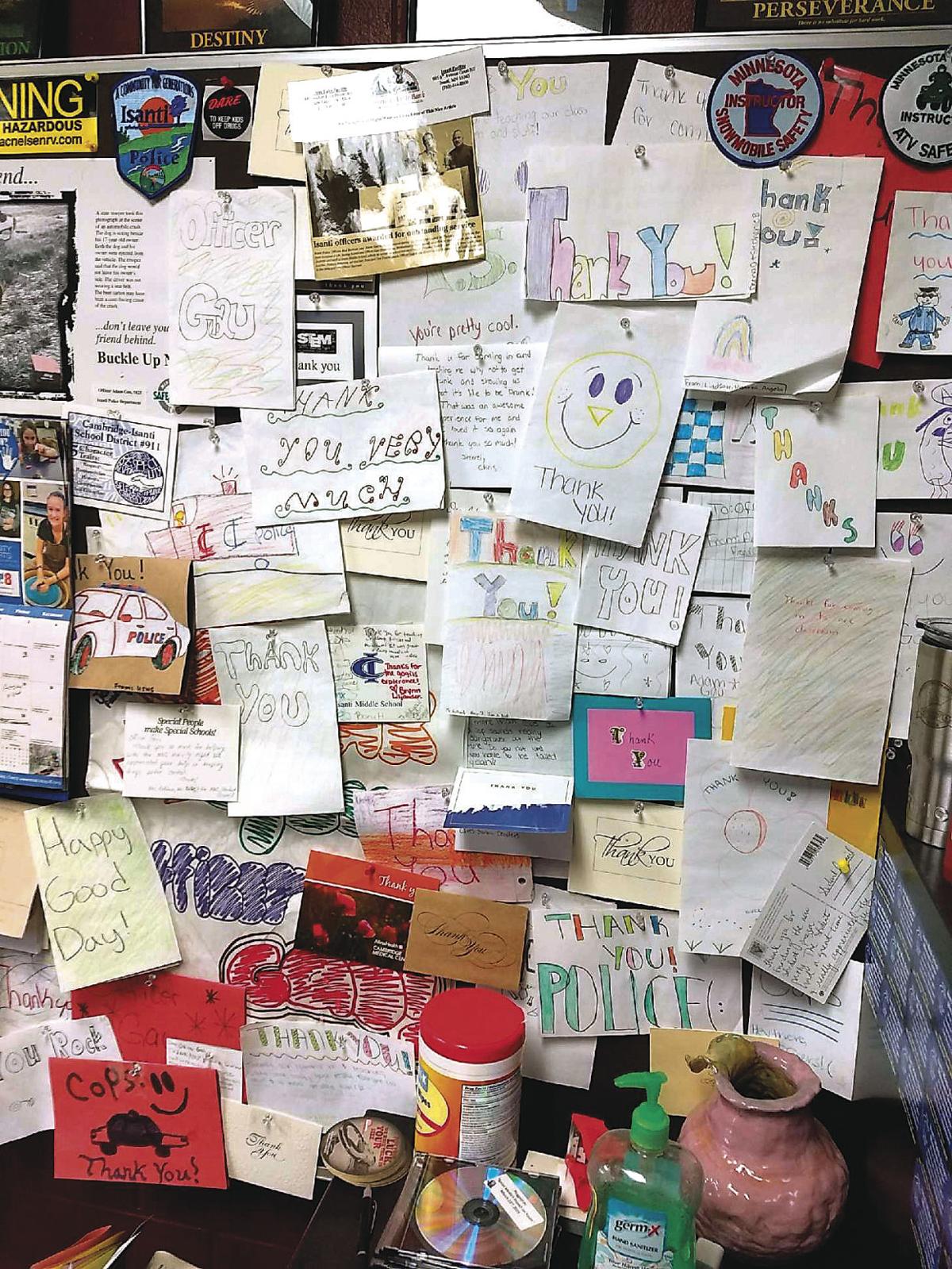 Gau says it’s the thank you’s and the difference he makes in the lives of the students that makes it all worth it. 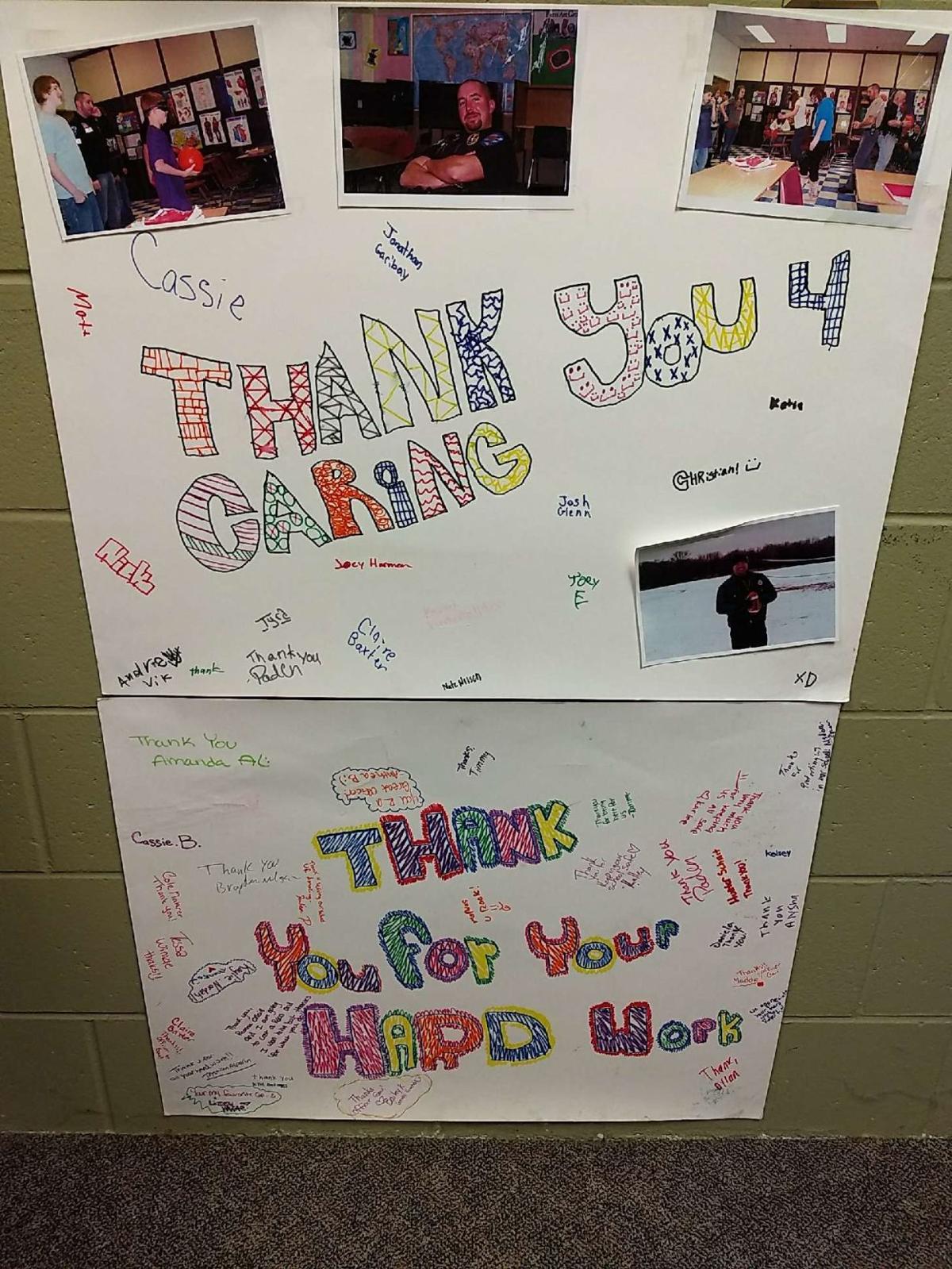 Officer Adam Gau’s office and desk drawers are filled with thank you notes from students he has helped throughout his career.

Gau says it’s the thank you’s and the difference he makes in the lives of the students that makes it all worth it.

What started as a childhood game of cops and robbers has now transformed into a career allowing Isanti Police officer Adam Gau to help change the lives of children in his hometown.

The award came after he was nominated by Isanti Police Chief Gene Hill and Isanti Middle School Principal Randy Pauly.

The nominations highlighted Gau’s excitement in the office, his “I have an idea” attitude and his ability to take his and others’ ideas and evolve them into bigger things, which he customizes for his students.

“Adam really does have a passion for the kids, and it’s clear in every decision that he makes. It’s always what’s best for the kids with him, and sometimes that is hard for faculty, but Adam comes from an experience of his own which is what really drives him,” said Cory Spencer, school resource officer for Chisago Lake High School and presenter at the MNJOA conference.

Gau’s career in Isanti began in June 2005 when he was hired on as a part-time officer. He was promoted to full time in February 2008, and in March 2008 he took on the position of school resource officer within Isanti Middle School.

At the time Gau took the position as SRO, the position was removed from the budget, but after Gau’s success and the difference he had made with students in just the first couple months, it was added back in.

With an associate of applied science degree from Alexandria Technical & Community College in law enforcement, along with hundreds of hours of training since he began on the force, Gau has the experience needed to be a positive influence on the children he works with, and it shows through his multitude of awards he has earned.

In 2011 Gau was recognized by the Isanti City Council for receiving the Honorable Mention Meritorious Service Award of 2010 for cases he worked on. In 2015 he was awarded with the Isanti County Law Enforcement Association Distinguished Service Award as well as the MADD Minnesota Outstanding Resource Officer. Then in 2016 he won the Minnesota Toward Zero Death Education All Star Award.

“His love of what he does comes though in the work he does,” said Isanti Mayor George Wimmer. “You have to have that drive and that love of doing it in order to create it. You go from a program that really wasn’t a program, it was a body in a building, to now being what I would say one of, if not the most innovative programs in the entire state with the best officer doing it in the entire state. That didn’t just happen, it happened because Officer Gau has that drive and desire to make sure he is providing the best possible service he can.”

With a wall full of awards and statewide recognition, Gau remains humble and attributes his success to the close-knit community he grew up with along with the students he works alongside of.

“This award, and any of the others I’ve won, aren’t for me, they’re for the community. You’re being told you’re doing good things, but you’re doing those goods things for the community and for those that you care about. Our community says it’s a community for generations; I was born and raised here, and I’m proud to continue to serve that community,” Gau said.

As a 2000 graduate from Cambridge-Isanti High School, Gau recalls not having a school resource officer when he attended school, and that has been a part of his drive to become one.

“The ability to connect with kids is why I wanted to become an SRO. I didn’t have an SRO in school, it was a relatively new process in the late 1990s, and I knew that me being a former student in these buildings and being able to come back and be an officer here is quite the privilege. I’m able to use that and connect with kids on a level that I understand,” Gau said.

Wimmer feels Gau makes a real connection with students. “His ability to connect with the students comes from the fact that he is a real person with them. He talks to them the way they want to be talked to. He gives them the opportunity to talk to him, and he really listens, which helps them to want to talk to him about things,” Wimmer said. “He helps them to reflect on things and he gives them the response they need and deserve. He not only provides tools to students, but he helps them to use them to make themselves better.”

With only four hours per day to work within the schools, Gau has been able to accomplish a lot of things.

“He has been able to develop incredible programing, which this award along with others have showed. It has just been a travesty for those students in Isanti schools that he isn’t able to work with them more. The tremendous programing he has created and put in place here really should be extended, not only for time within the middle school, but also for the primary and intermediate school as well as the charter school,” Wimmer said.

Some of the programming Gau has developed includes a seat belt challenge that makes buckling yourself into a vehicle a competition, and with its innovativeness, it has been adopted statewide through the MNJOA. Gau has also developed lesson plans focused on marijuana, tobacco, alcohol and narcotics that he has created from scratch and coincide with the curriculum already being taught within the schools. Through that curriculum Gau piloted a fatal vision course, which allows eighth-grade students to safely experience some of the effects of drunken driving through blurred vision goggles and pedal car operation through a controlled track.

Gau has also used his passion as the student council adviser to connect with council members to focus on the things they think will better their school. Under Gau’s supervision the council has been able to bring another AED into IMS as well as a listening locker program, which provides students with a confidential way to express their concerns.

“Adam really does shine, and it shows through his work and his relationships with his students. With all of the things he is doing with just four hours, imagine what he could do with eight. It baffles me that the district only funds him for such a short amount of hours,” Spencer said. “It really takes a special breed to be an SRO, especially to be an effective one. Not only does Adam work with the children in the moment, but he also tries to develop the relationship between youth and law enforcement as a whole, which is the ultimate goal.”

Spencer and Gau spent time working together within the Isanti Police Department and also on the board for the MNJOA.

“To have the opportunity to work in the community you grew up in is an amazing and unique experience. It’s a really rare opportunity that I am excited I have, it really is difficult to put into words how much it means to me. I used to play cops and robbers and ride my bike down the streets that I now drive my squad car down, and every once in a while, it really dawns on me,” Gau said. “In the same sense, it has really given teeth to my discussion with students that if there is something you want to do, you can do it, you can accomplish this, I did.”

Gau’s wife, Cathy, can attest to her husband’s dedication.

“His passion and dedication to his students is endless. He spends a lot of time at home thinking about and discussing new ideas on how to better educate his students and truly get through to all of them,” Cathy Gau said. “I enjoy his dedication and I’m proud of what he has accomplished so far.”

Gau looks forward to continuing to create opportunities for his students and staff to help them learn and succeed. He looks forward to also challenging himself every day to be better and make a difference.