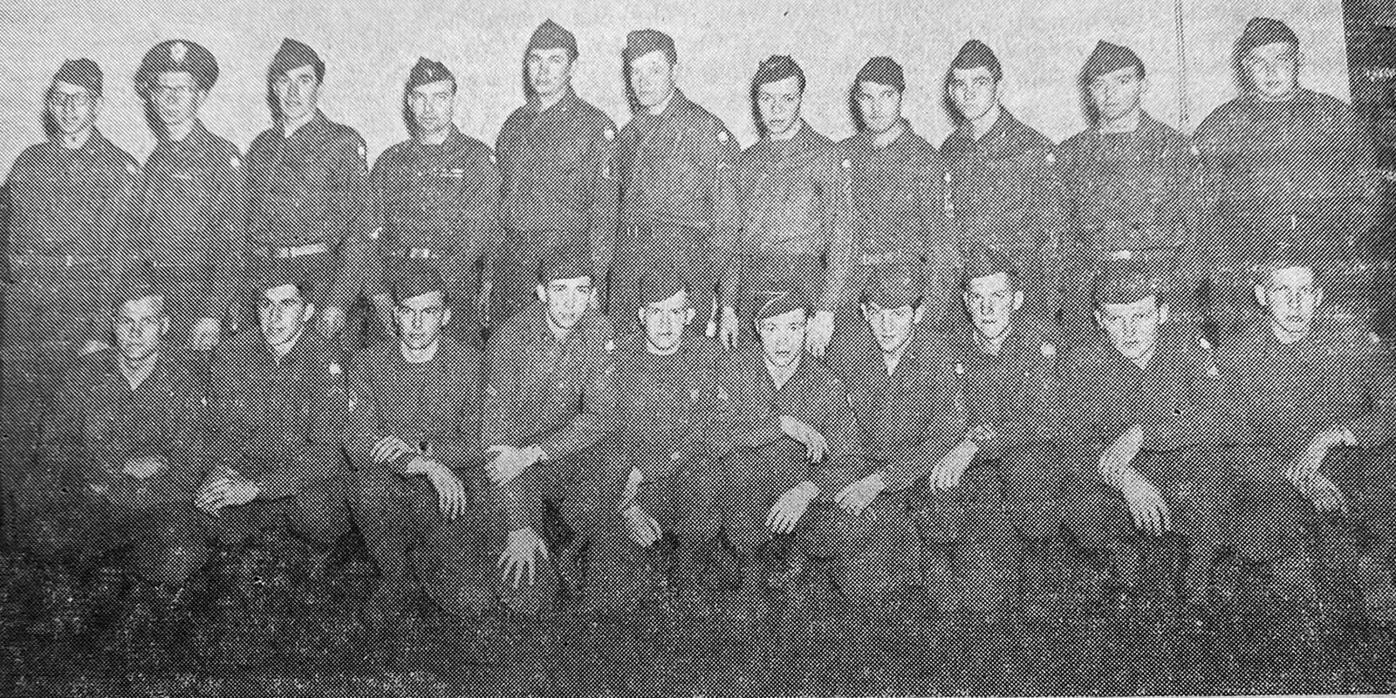 Eleven sets of brothers from Princeton were deployed to the Korean War in January 1951. Starting in the back row and then moving to the front row, left to right, were brothers: David, Charles, and Reed Henschel; Arnold and Eugene Whitcomb; Gordon and Dalton Grow; Donald and Loren Sanford; Kenneth and Merlin Wesloh; Mervin and Jim  Bukoskey; Maurice and Ralph Bistodeau; Ronald and Joseph Ebner; Roy and Donald Howard; and Russell and Clarence Wiedewitsch. 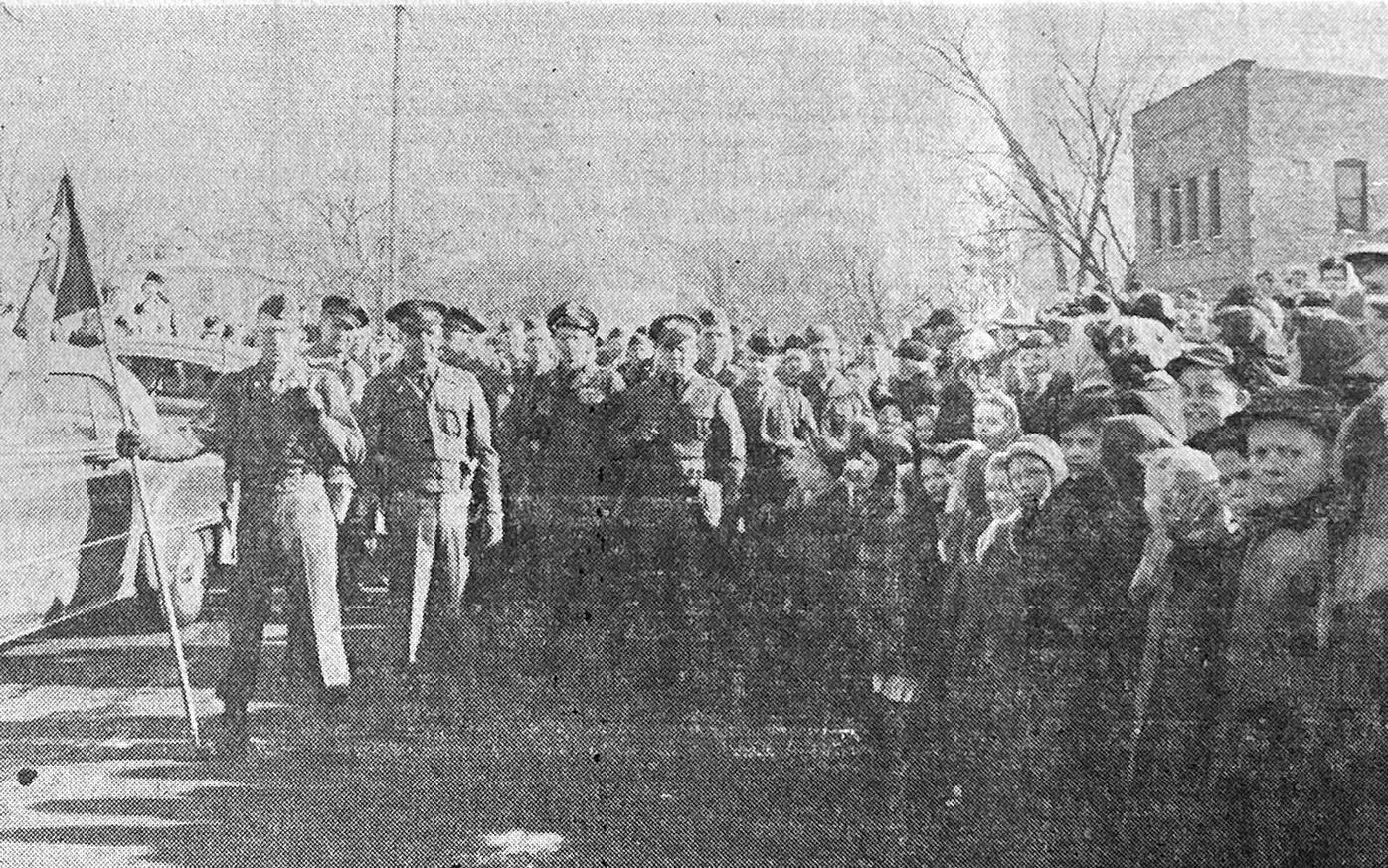 Cpl. David Henschel, in the foreground, carries the flag of Company D. One hundred or more school children were on hand near the Princeton Armory as Company D marched from the armory to the Princeton depot.

Eleven sets of brothers from Princeton were deployed to the Korean War in January 1951. Starting in the back row and then moving to the front row, left to right, were brothers: David, Charles, and Reed Henschel; Arnold and Eugene Whitcomb; Gordon and Dalton Grow; Donald and Loren Sanford; Kenneth and Merlin Wesloh; Mervin and Jim  Bukoskey; Maurice and Ralph Bistodeau; Ronald and Joseph Ebner; Roy and Donald Howard; and Russell and Clarence Wiedewitsch.

Cpl. David Henschel, in the foreground, carries the flag of Company D. One hundred or more school children were on hand near the Princeton Armory as Company D marched from the armory to the Princeton depot.

When the call came for the Princeton unit of the National Guard to mobilize for the Korean War, Princeton businesses closed for an hour and most of the city residents came out to send off by train the Company D of the 682nd Engineer Battalion/47th Infantry Division to Fort Rucker, Alabama.

The train pulled into the Great Northern Depot in Princeton after picking up Company C of the 1st Battalion 194th Armor Tank/47th Infantry Division in Milaca. Units from Anoka and Hutchinson would also join the Milaca and Princeton boys on the train that day.

There were 11 sets of Princeton brothers who went off to war that day, most of whom were mobilized 12 days earlier along with their Princeton guardsmen who began living at the armory.

Long-lost film footage of the send-off, as well as archival footage of the local soldiers’ daily lives at Fort Rucker, were shared during the Memorial Day program at 10 a.m. in the Princeton Performing Arts Center as part of the community Memorial Day festivities.

“It’s special, because it comes during the 70th anniversary of the local boys being deployed,” said Randy Hatch, an Iraq war and Vietnam Era veteran and past commander of the Princeton American Legion Post 216. Randy Hatch’s father Barry Hatch is one of three surviving Korean War veterans still living in Princeton. Arnie Whitcomb and Earl Brooks are the others.

Hatch says hundreds of people showed up at the depot in Princeton that day after the Princeton guardsmen marched the five blocks from the downtown armory to the Great Northern Depot.

“Men met their sons, shook their hands, and sent them off to Korea,” Hatch said.

“There’s a touching moment (in the footage) of Barry Hatch shaking his dad’s hand while standing on the platform at the Great Northern Depot,” Schreiber said.

That scene was a part of the four minutes of footage shared on Memorial Day at the PAC. The footage comes from reels of film that one day arrived unexpectedly on the doorstep of the Mille County Historical Society’s Princeton depot headquarters.

“I came into the office one day, and there was a large box sitting on the table addressed to me,” Schreiber recalled.

Since Schreiber wasn’t expecting anything in the mail, he was intrigued by what might be inside the box postmarked Faith, South Dakota.

The package was sent by Reed Henschel, who, himself served in the Korean War. Reed Henschel, and his brothers David and Charlie boarded the train headed for Fort Rucker.

Reed Henschel, who passed away in 2017, was the custodian of several reels of 16mm movie film, Schreiber learned. The film was shot by Charlie Henschel, who had been bestowed a special assignment from Doc Reynolds, a local chiropractor and owner of Princeton’s Strand Theater.

“Doc Reynolds gave Charlie a 16 mm camera and several rolls of film and asked Charlie to record what the boys were doing,” Schreiber said. That included footage of deployment day at the train platform, and on the grounds of Fort Rucker during military training, he said.

The reels of film were mailed back to Doc Reynolds on a regular basis, with the footage then shown at the theater before the featured picture.

In all, 26,000 feet of 16mm film - or two hours of footage - made its way to Schreiber and the Mille Lacs Historical Society.

“To me, it constitutes great depictions of military life,” Schreiber said. “I’m actually astounded that military authorities allowed it to be filmed.”

The film depicts the realities of living during a wartime era.

“[There is] a levity of excitement before the train arrives. When the train arrives, the mood changes dramatically,” Schreiber said. “It turns sober and the reality that (the guardsmen) are being deployed becomes apparent.”

Schreiber says he immediately knew the importance of the film footage to, not only Princeton’s history, but Minnesota history. Preserving the film was of extreme importance.

“I took a leap of faith and approached the Minnesota Digital Library,” Schreiber said.

The Minnesota Digital Library is a University of Minnesota program that supports discovery and education through access to unique digital collections shared by cultural heritage organizations from across the state of Minnesota.

At first, the organization balked at working with the Princeton footage because the majority of it was shot at Fort Rucker in Alabama. But Schreiber appealed, noting that it was shot by a person from Princeton, featured people from Princeton, and was shot with the people of Princeton in mind for viewing at the Strand Theater. When all was said and done the organization concurred and through a grant, funded the conversion of the 16mm film to a digital format so it can be preserved forever.

The full-length film will be maintained by the Minnesota Digital Library, Schreiber said, and hosted on the organization’s online platform.

Speaking about the footage, Schreiber said the footage is a glimpse into the past era of war.

“Images like this are on the edge of oblivion,” Schreiber said.