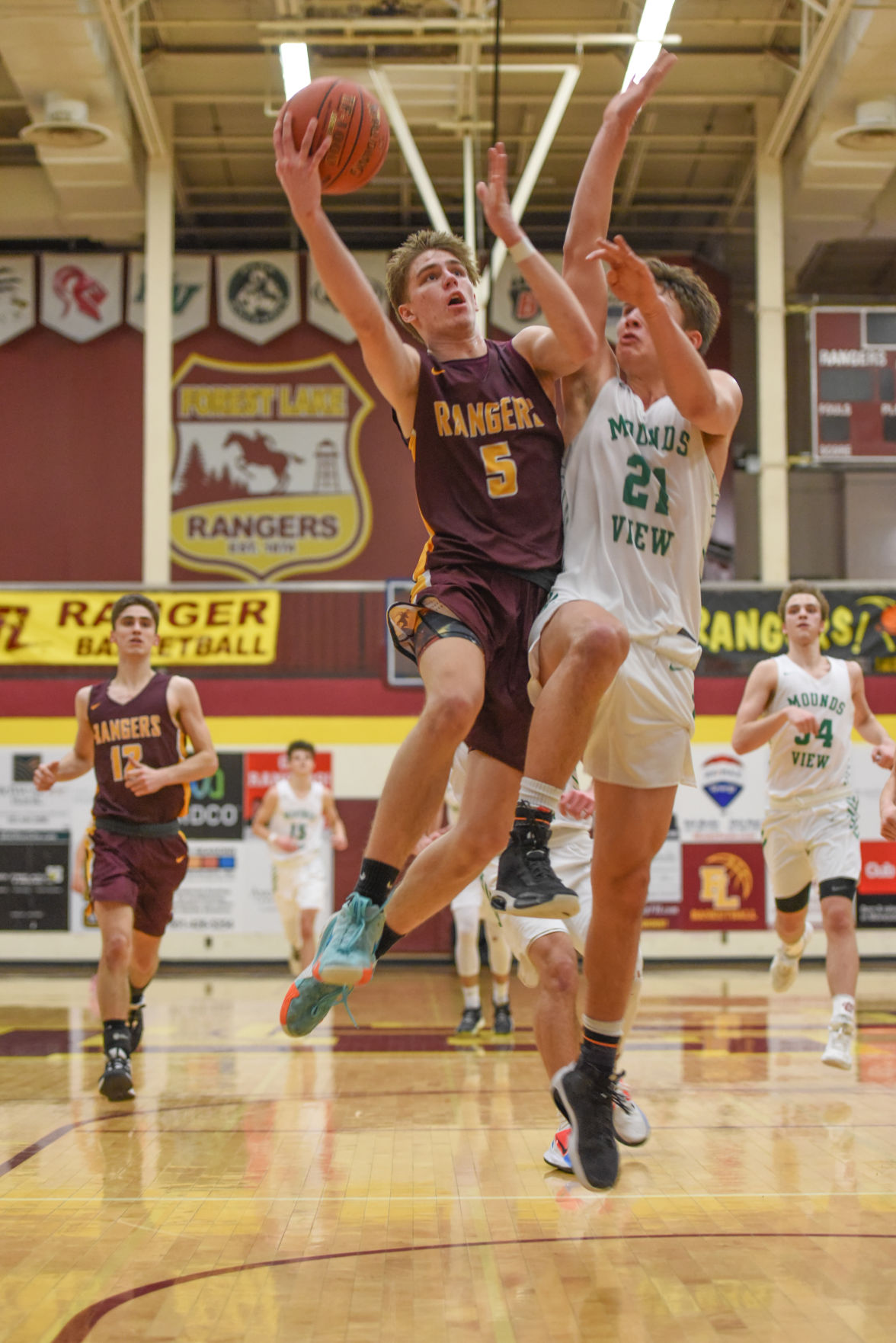 Eric Peterson drives to the basket during Forest Lake’s 68-63 victory over Mounds View on Jan. 24. The senior led the Rangers with 17 points. 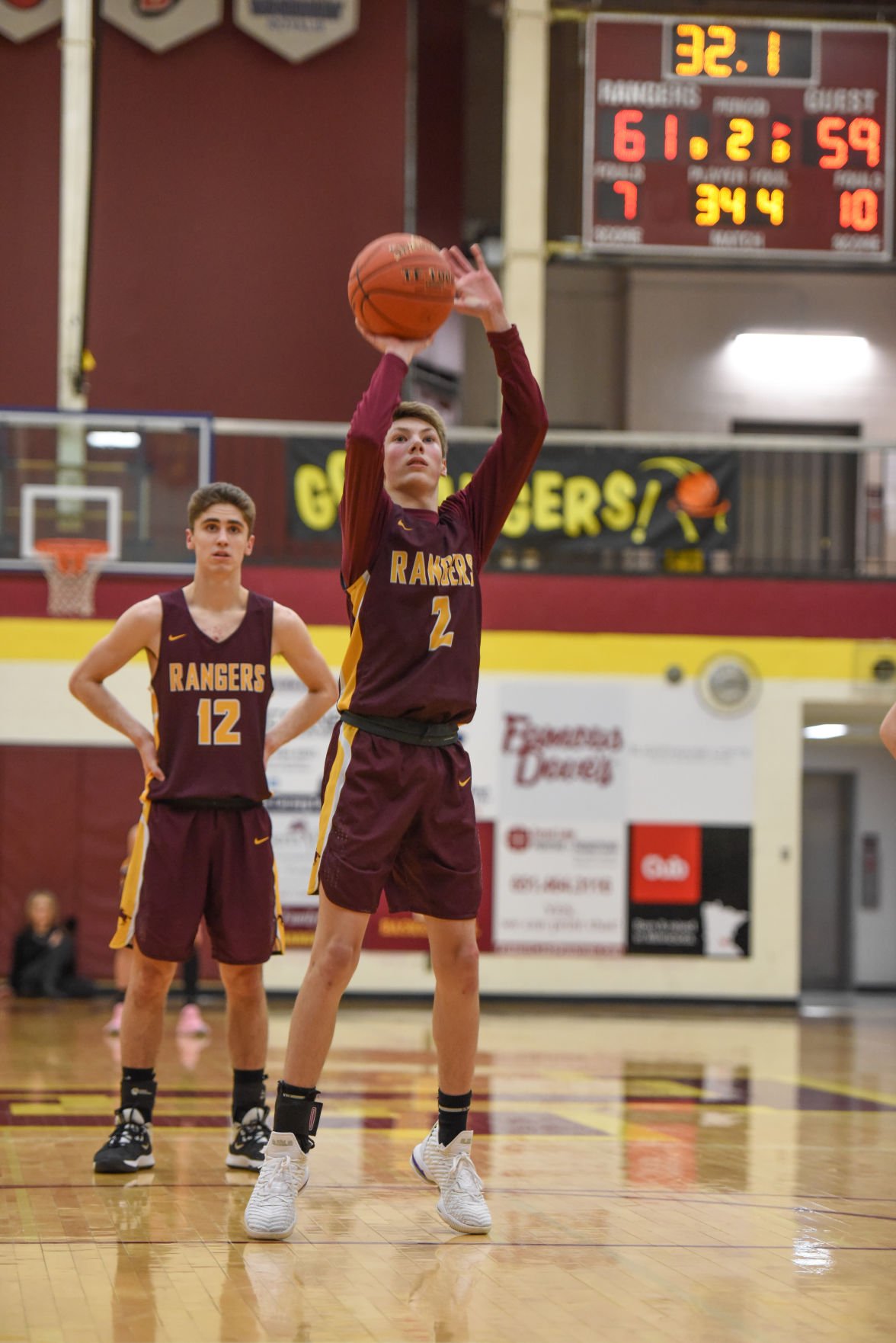 Sophomore Nick Bartlett connected on six free throws in as many tries in the final 32 seconds of the game to hold off the Mustangs’ persistent comeback attempts.

Eric Peterson drives to the basket during Forest Lake’s 68-63 victory over Mounds View on Jan. 24. The senior led the Rangers with 17 points.

Sophomore Nick Bartlett connected on six free throws in as many tries in the final 32 seconds of the game to hold off the Mustangs’ persistent comeback attempts.

Before the 2019-20 Suburban East Conference boys basketball season began, most would have guessed that Cretin-Derham Hall and East Ridge, teams featuring Division I talent that had both recently made long state tournament runs, would be the class of the league – and that there may not be much to separate the rest of the teams.

Cretin, ranked No. 4 in the state, sits atop the SEC at 9-0 with state No. 10 East Ridge a game back, so the first part of the prediction came true. The second part has had to be clarified a bit: Although there is indeed something a pileup in the middle of the SEC table, a surprisingly strong Mounds View squad had emerged, as of last week, as a clear No. 3 team, having lost only to the two frontrunners while sweeping the rest of its conference and nonconference opposition.

Thus was the table set for a signature victory for the underclassman-heavy Forest Lake team, which welcomed that hot Mounds View squad to the Ranger court on Jan. 24. In a determined and gritty performance, the Rangers handed the Mustangs a 68-63 defeat that momentarily stands as a signature victory for the young squad and could well be remembered, as time passes, as a game in which the current crop of Rangers “grew up.”

“We got little bit tougher tonight,” Forest Lake head coach Dan Cremisino said. “It was a grow-up game, and now we have to see what we do the next time out, and the next one after that.”

One for the alums

The game doubled as the Rangers’ annual Alumni Night, so a number of past stars were on hand to watch the young 2019-20 Rangers deal the Mustangs their third defeat of the season. Players from the 2017-18 state tournament team and from strong teams further back were honored at halftime, with a special recognition for the 2009-10 team for the 10-year anniversary of those Rangers’ conference and section titles and state tournament run.

While the alumni were on the court at the break, the scoreboard showed the unexpected numbers of Forest Lake 31, Mounds View 29, and when action resumed, the score differential never swung too far in either direction.

The Mustangs matched the Rangers shot-for-shot early in the decisive frame, but the Rangers pulled to a 45-40 advantage after junior Carter Thiesfeld hit a layup and then a 3-pointer on back-to-back possessions. Thiesfeld, a highly rated soccer recruit, has missed some time with the basketball team while honoring club soccer commitments, but when he has been available, he has been a major contributor. His 14 points in the Mounds View game were second only to senior Eric Peterson’s 17.

The Ranger lead evaporated in the space of three Mustang possessions, all of which ended with 3-pointers. Following a timeout, the Rangers got back into the game, and with 5:55 showing on the clock, they had worked to a 52-50 lead. A Mustang 3-pointer swung the lead briefly into the visitors’ hands before sophomore Nick Bartlett knocked down an answering 3 at the other end.

“Mounds View is a physically tough matchup and they’ve won a lot of games,” Cremisino said. “[The Rangers] played the right way, played with intensity and had some big answers when [Mounds View] had hit some big shots.”

A key moment occurred with 4:13 left and the Mustangs ahead 58-55. Junior Jordan Boysen went up to the glass and banked in a layup under heavy pressure, and two whistles blew. One referee was signaling a foul (and bonus free-throw), while another was rolling hands to call Boysen for traveling. After those refs conferred, and later brought the third ref into the conversation, the “and one” call was confirmed. Boysen sank the free throw, making the whole situation worth a 3-point swing in the Rangers’ favor that would, obviously, prove absolutely vital to the end result.

The Mustangs earned the last tie of the game at 59-59, a score that survived missed 3-point tries at both ends before Peterson finally broke the deadlock by spinning past a defender and sinking a short-range shot with 1:12 to go. With just over 30 seconds left, Bartlett made a steal and was tripped for a foul, sending him to the line to sink two and put the Rangers ahead 63-59.

A Thiesfeld free throw moved the lead to five before the Mustangs made a basket to tighten the difference. The Rangers elected to put the ball in Bartlett’s hands for the expected intentional foul, and the decision paid off when he went 2-for-2.

“We wanted Nick to be on the free-throw line at the end,” Cremisino said. “He’s made clutch free throws to extend games or win games before. That’s confidence, routine and practice.”

The Mustangs scored again with 8 seconds left, but again Bartlett sank two foul shots to recreate the two-possession lead. Bartlett would finish the game with 9 points – the previously mentioned trey plus 6-of-6 foul shots in the final half-minute.

All told, the Rangers ended last week with an overall record of 7-8 and a 4-5 mark in the SEC, which places them in a tie for sixth with Irondale and only two games behind third-placed Mounds View.

The Rangers had a chance to break that tie when they visited Irondale Tuesday after press time, and then comes one of the tough games, a home test against Cretin-Derham Hall on Thursday at 7 p.m. On Tuesday, Feb. 4, at 7 p.m., the Rangers will host defending Section 7AAAA champion Cambridge-Isanti in a makeup game that was postponed due to the snowstorm of Jan. 17-18.

“I would like to see us play with and hang with the rest of the conference, and at least challenge Cretin and East Ridge and make it a game,” Cremisino said. “We have to build on this win, and you never know when a team is going to grow up.”