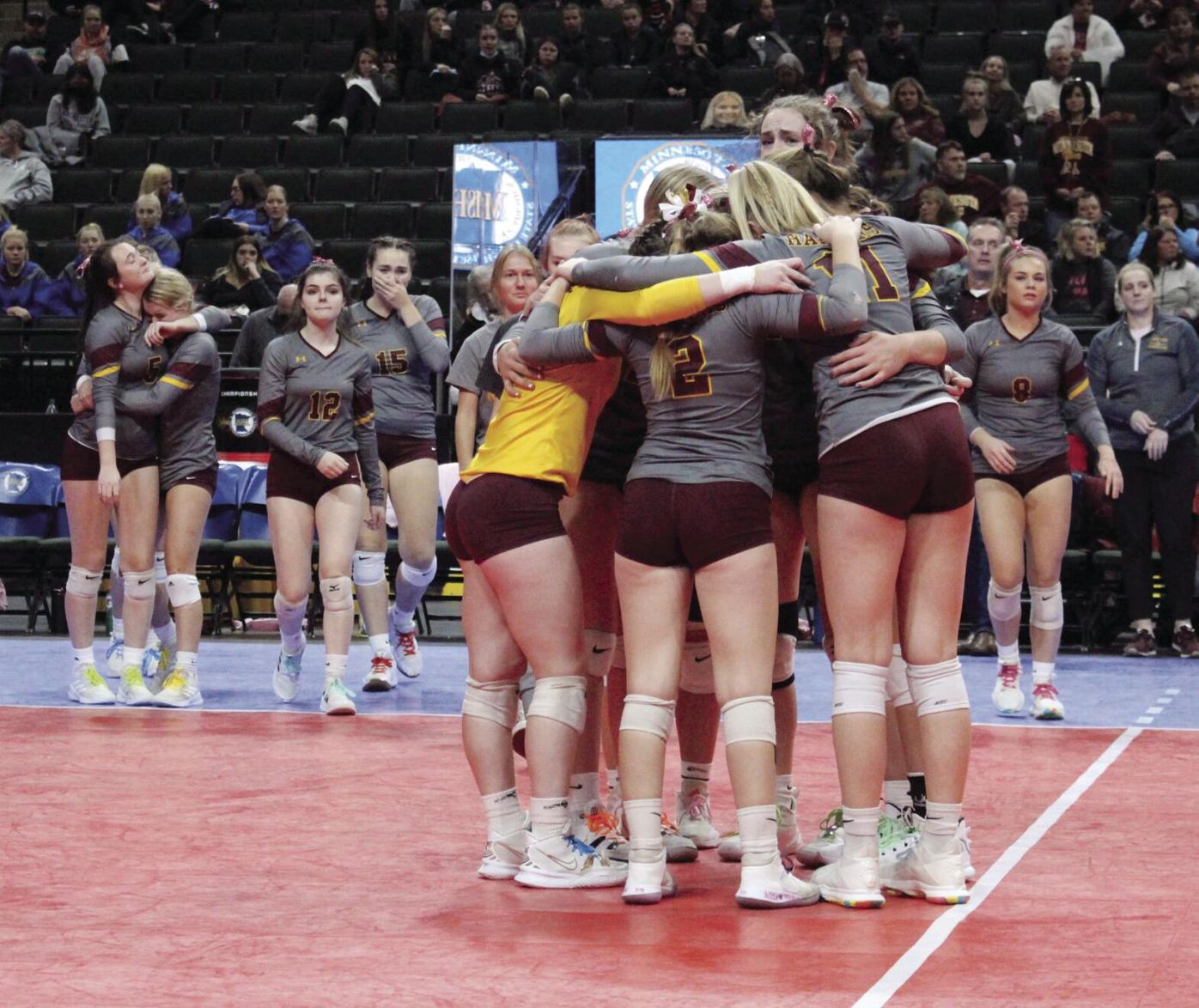 The Forest Lake volleyball team reacts to its 5-set loss to Bloomington Jefferson in a consolation match at the Class 4A State Tournament. The loss was the second 5-set setback in as many days for the Rangers. 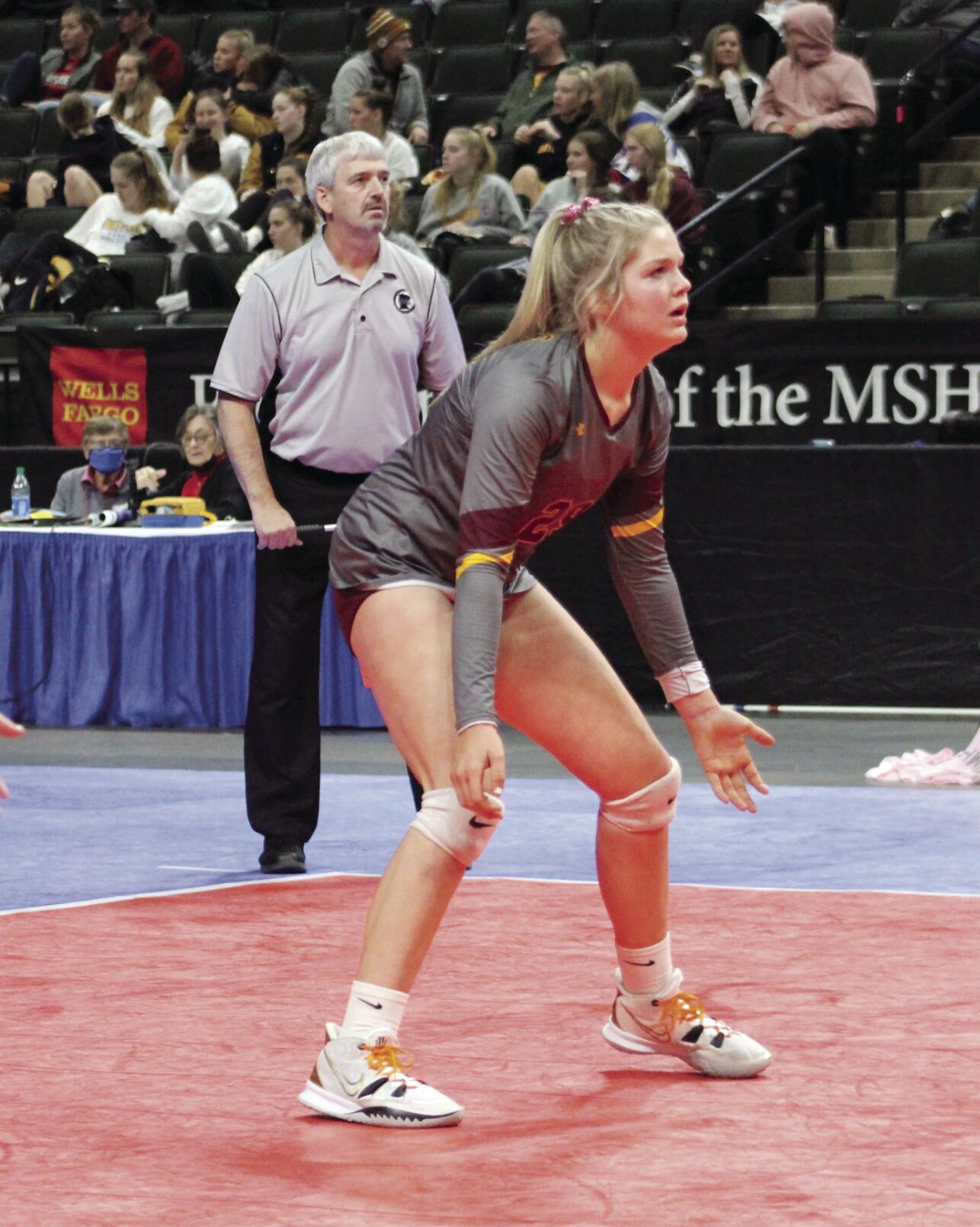 Junior Bethany Weiss prepares to receive a serve in Forest Lake’s match against Bloomington Jefferson. The middle blocker’s ability to play all six positions on the court was one of many reasons she was named all-state by the Minnesota State Volleyball Coaches Association. 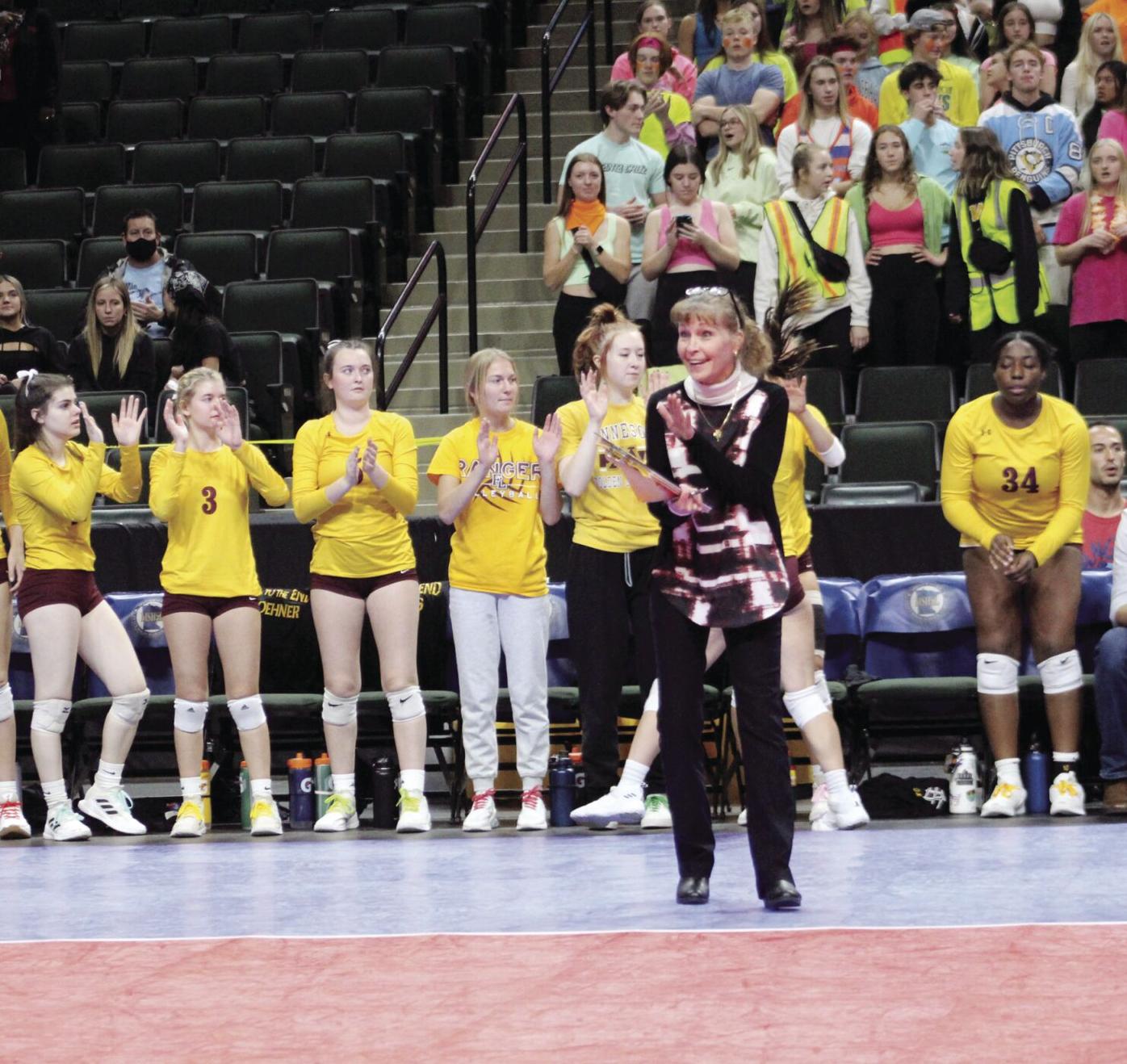 Forest Lake volleyball coach Sherri Alm, foreground, and the Rangers bench cheer on the team during its match against Eden Prairie. 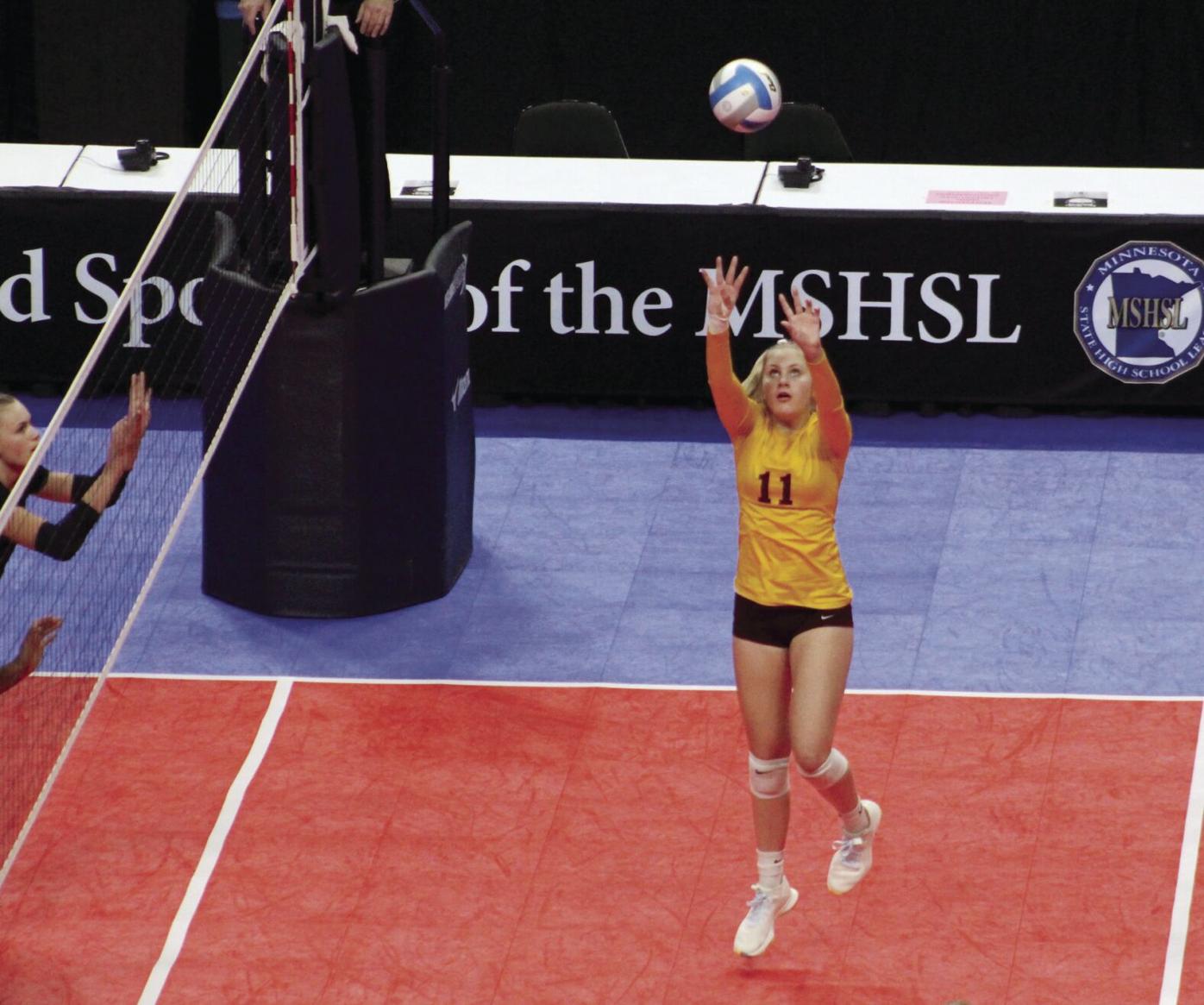 Sophomore setter Katie Brandl prepares to pass the ball to a Forest Lake hitter in the match against Eden Prairie. 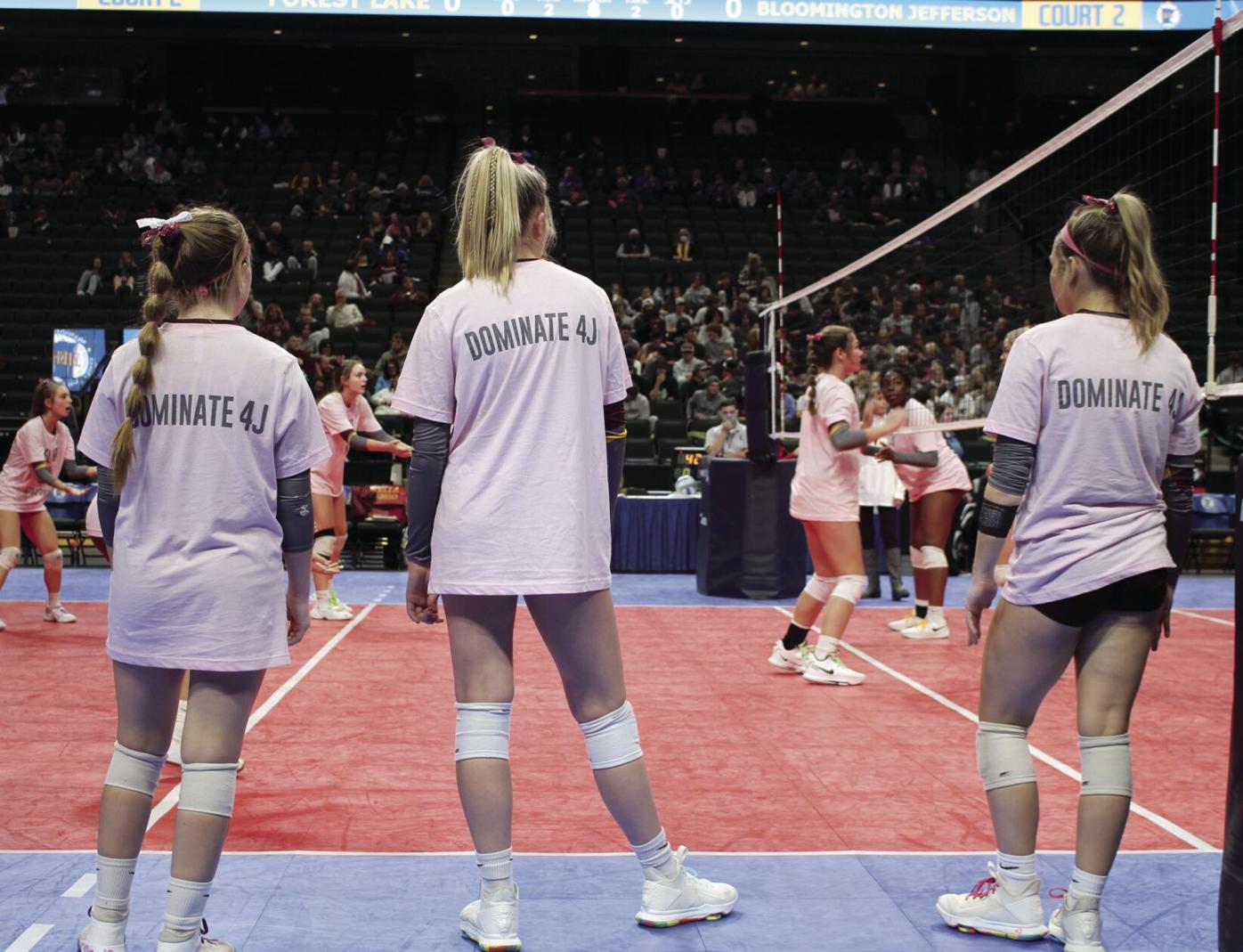 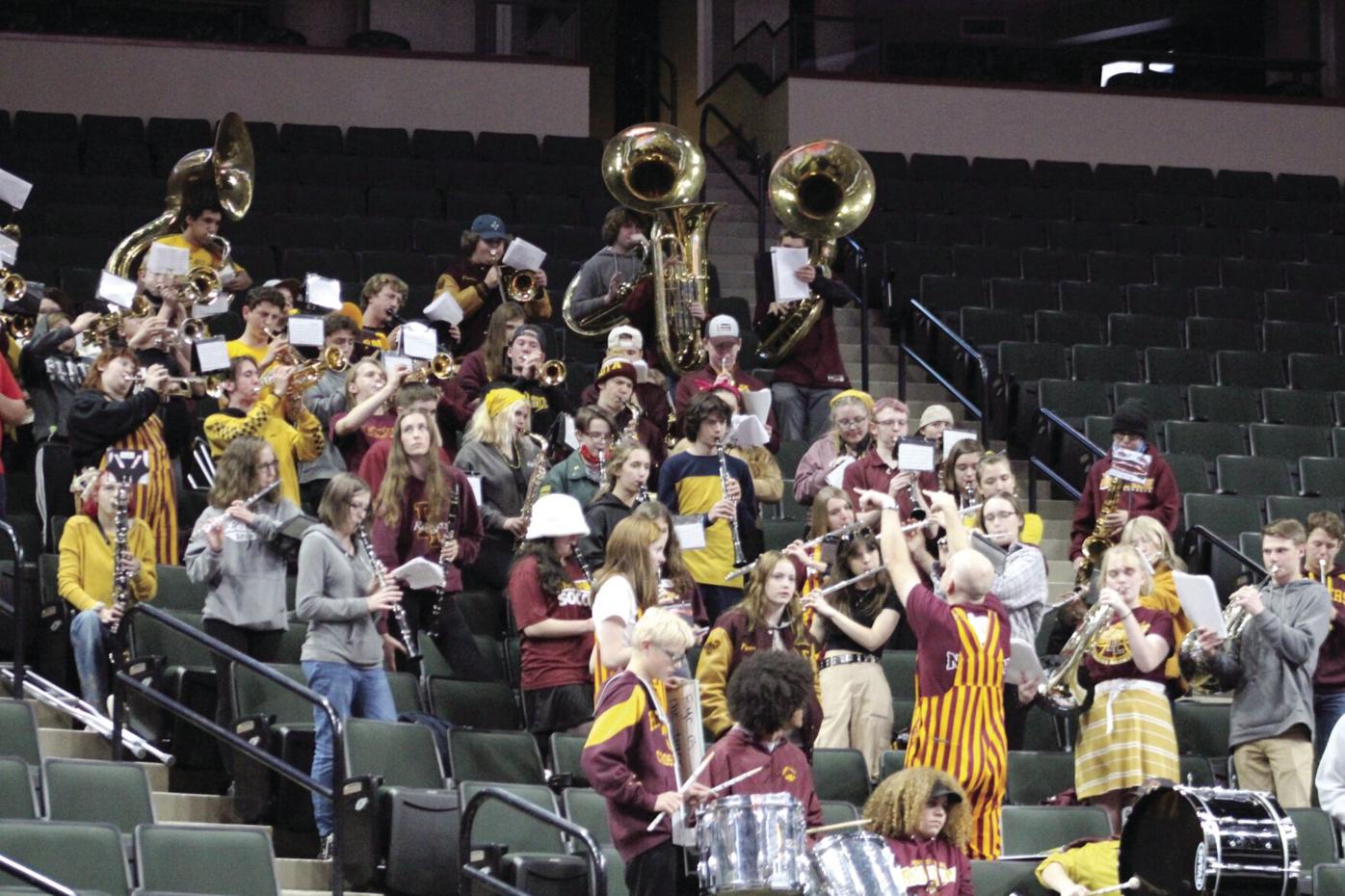 The Forest Lake pep band followed the volleyball team to the Xcel Center for the Rangers’ clash with Eden Prairie on Wednesday, Nov. 10. 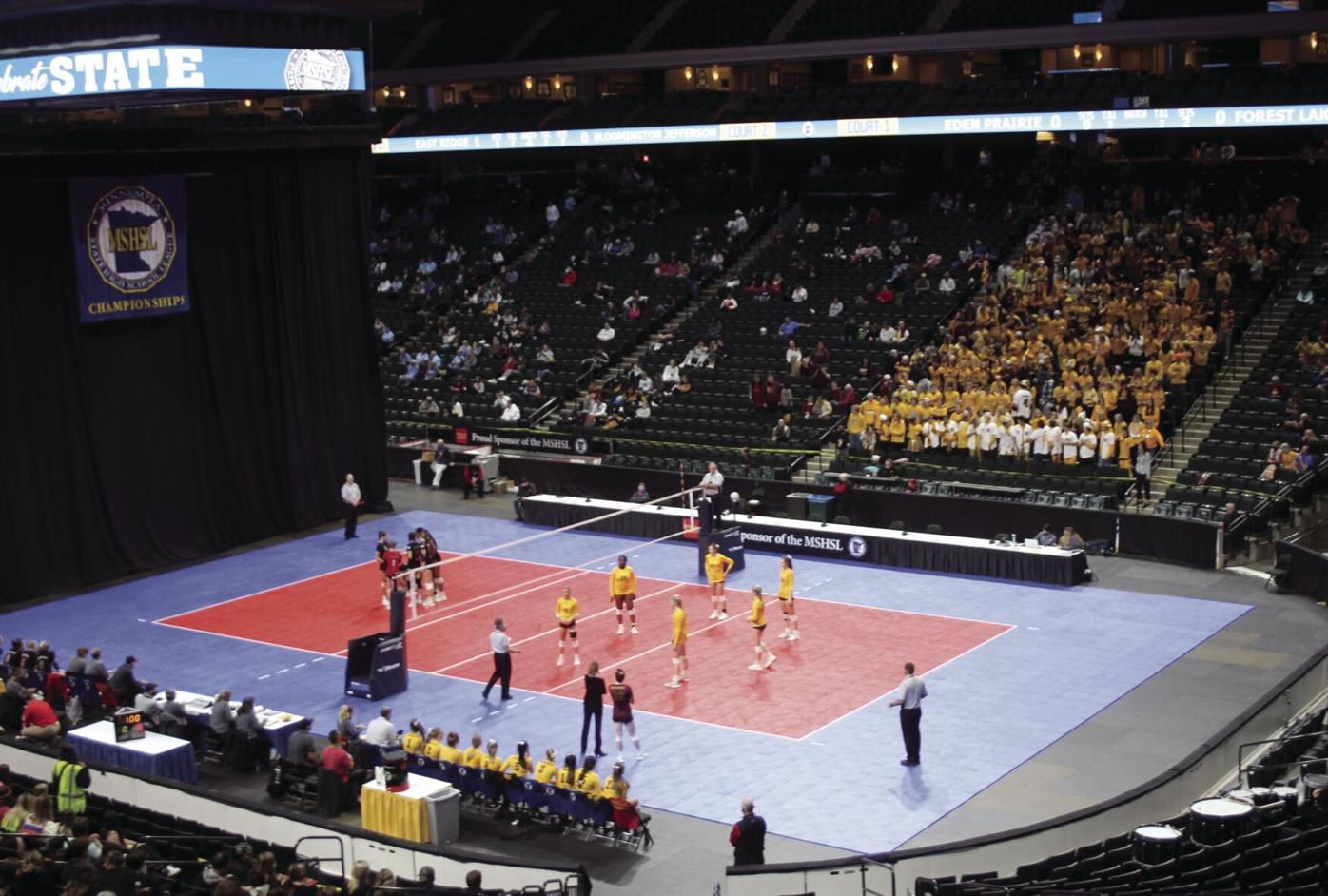 The view of the court during the Forest Lake volleyball team’s match against Eden Prairie. That bright yellow group in the Xcel Center stands were students there to cheer the Rangers on to victory.

The Forest Lake volleyball team reacts to its 5-set loss to Bloomington Jefferson in a consolation match at the Class 4A State Tournament. The loss was the second 5-set setback in as many days for the Rangers.

Junior Bethany Weiss prepares to receive a serve in Forest Lake’s match against Bloomington Jefferson. The middle blocker’s ability to play all six positions on the court was one of many reasons she was named all-state by the Minnesota State Volleyball Coaches Association.

Forest Lake volleyball coach Sherri Alm, foreground, and the Rangers bench cheer on the team during its match against Eden Prairie.

Sophomore setter Katie Brandl prepares to pass the ball to a Forest Lake hitter in the match against Eden Prairie.

The Forest Lake pep band followed the volleyball team to the Xcel Center for the Rangers’ clash with Eden Prairie on Wednesday, Nov. 10.

The view of the court during the Forest Lake volleyball team’s match against Eden Prairie. That bright yellow group in the Xcel Center stands were students there to cheer the Rangers on to victory.

For the Forest Lake volleyball team, this year’s Class 4A state tournament was the most painful elevator ride imaginable.

The ride included a slow, steady rise that appeared ready to pay off with a stop at the penthouse – only to plunge to the basement. And to make matters worse, the Rangers rode that elevator twice.

Forest Lake won the first two sets in its opening-round match against Eden Prairie, the tournament’s second seed, only to see the Eagles swoop in to grab the next three sets and win the match played at the Xcel Center on Wednesday, Nov. 10.

And if that was not bad enough – and it certainly was – the Rangers were handed a taste of déjà vu in their consolation contest against Bloomington Jefferson the next day, again winning the first two sets before losing the final three.

“Both games hurt, because in both games we were right there,” Forest Lake coach Sherri Alm said after Thursday’s setback. “When you win the first two [sets], you have to stay dialed in and focused. I felt we ‘left’ the Xcel for points here and there, and these matches proved that every point matters.

“We just didn’t quite shut the door. Both teams had good hitters and were tough at the net, and we are undersized in those areas. But we played scrappy and played disciplined – until all of a sudden we didn’t.”

After both contests the Forest Lake players were left with a feeling of frustration and regret that cast a shadow over a fine season which saw the Rangers post a 21-11 record and win the Section 7 title for the third time in the last four seasons it was held.

“It was disappointing to fight so hard and fall short,” junior Bethany Weiss said after Wednesday’s loss.

But Alm felt her team should have no regrets about the tournament – or the season.

“This group plays really hard, and they play for one another,” she said. “They are amazing girls. They don’t quit, and the comments from the bench are positive. They have done the work all season, and they are an amazing group that I am super-proud of.

“They have nothing to hang their heads about.”

The Rangers could not have scripted the start of their match against Eden Prairie much better than it actually transpired.

In each of the first two sets Forest Lake played very clean, effective volleyball while the Eagles struggled to score points at crucial times in close matches. In the first set, which included 11 ties and six lead changes, the Rangers broke a 24-24 tie with a kill by junior Kaysie Bakke, then took advantage of an Eden Prairie error to win the set 26-24.

There was more of the same in the second set, which saw 13 ties and four lead changes. Forest Lake faced a set point at 24-22, but took advantage of back-to-back blocks involving Weiss to tie the match, then used a service ace by senior Josie Lerdall and a kill from Bakke to close out another 26-24 win.

“We knew we could compete with them, and I don’t know if people realized that,” Weiss said. “We came out and did what we did best.”

Alm agreed, adding: “We channeled our energy into something positive, and we were able to minimize our mistakes. We didn’t serve as well as we could, but I was super-proud of how we battled, especially against a team that was larger than we are.”

The third set again was tight, with the two teams tied at 22-22 before Eden Prairie ran off 3 straight points to keep the match alive.

But the start of the fourth set was the point of the match Forest Lake would like to have back, because it was filled with mistakes and errors that allowed the Eagles to build early leads of 5-0 and 12-1.

“We’ve come back from bigger deficits early in the year, so we knew we could do it,” Lerdall said. “We took the first two sets, so we knew we were capable. And we had nothing to lose.”

And the Rangers nearly did come back, whittling their deficit to a single point on three different occasions before eventually falling 25-18.

“We still made them nervous, and that was a lot of fun,” Alm said. “At our early timeouts, I told everyone to step back because they have done this a lot.”

In the fifth set Forest Lake rebounded nicely, again forcing Eden Prairie into mistakes that lifted the Rangers to early leads of 5-2 and 7-4.

“[The message was] to keep fighting,” Weiss said. “We were the underdog, and they were the second seed. So we just tried to come back with confidence.”

But the Eagles fought back and tied the match at 14-14, guaranteeing a bit of “overtime.” From that point Forest Lake never could get the lead back, but did manage to retie the game an amazing five times before falling 21-19.

“We just tried to get a lead, because it seemed as if we would tie, but then we would be down by 1 [point],” Lerdall said. “We needed to grab hold of the lead, but instead we were just fighting to hang on.”

Weiss led the team with 26 kills in this match, while Bakke had 18 and both Lerdall and sophomore Maddie Muellner had 10 apiece. Sophomore Katie Brandl dished out 53 assists and was a part of eight different blocks, while Weiss took part in seven blocks and Muellner six.

Senior libero Emily McPhee led the team with 21 digs, while Weiss had 20, seniors Maddie Sandstrom and Jonna Goehner finished with 13 and 12, respectively, and Brandl had 10.

While the Rangers did not win, they did draw praise from Eden Prairie coach Chad Becker after the match.

“They pushed us – they didn’t look like a not-top-10 team to me,” he said of Forest Lake. “That looked like a top 5 team in the state. They looked great.”

Alm’s message to her team after the painful Eden Prairie loss was a simple one.

“We needed to regroup, because we still get to play volleyball,” she said. “And how great is that?”

In the first set Forest Lake scored 7 straight points to turn a 20-17 deficit into a 24-20 lead and a 25-21 victory; the second set saw the Rangers slowly but steadily build an advantage that grew to as many as 5 points on the way to a 25-21 win.

But things started unraveling in the third set, as Forest Lake fell behind by as many as 9 points in a 25-19 loss. The fourth set was closer, but Bloomington Jefferson eventually prevailed 25-21 to set up another winner-take-all fifth set.

And in that set the Rangers fell behind 7-1 and never were able to completely rebound. They did close the deficit to 3 points before the Jaguars won 15-11.

“I thought our girls responded really well, playing hard and controlling what we can control,” Alm said. “If we could have gotten one more block or one more kill or one more something else, it would have been a different story. Because we were right there.”

Weiss again led the team with 22 kills, while Bakke finished 18 and Muellner added 15. Brandl had 51 assists, while McPhee led three Rangers who had double-figure digs with 26; Weiss had 11 and Goehner added 10.

“We came out hungry and we battled, and people took notice of Forest Lake volleyball,” Alm said. “We were right there – and we’re young overall. We are saying goodbye to some seniors, and that is hard, but it’s exciting to have some players with significant experience now who are underclassmen.”

Weiss was one of 12 Class 4A players from around the state who received all-state honors in voting by the Minnesota State Volleyball Coaches Association.

“That’s a huge honor, because there are a lot of people up for that honor, and there is a lot of talent around the state,” Alm said. “Being a six-rotation middle makes her someone other teams have to note. They have to develop a game plan around her.

“And she’s not at her ceiling. She’s a great competitor and a great person.”

The shirts honored the memory of the late Julie Fick, the aunt of senior Amelia Amlee. Fick died on Oct. 23 following a long battle with cancer.

“When our teammate lost her aunt to cancer, we decided to dedicate the state tournament game to her [memory],” Weiss said after Wednesday’s match against Eden Prairie. “I’m proud of what we did, because we did nothing but fight.”