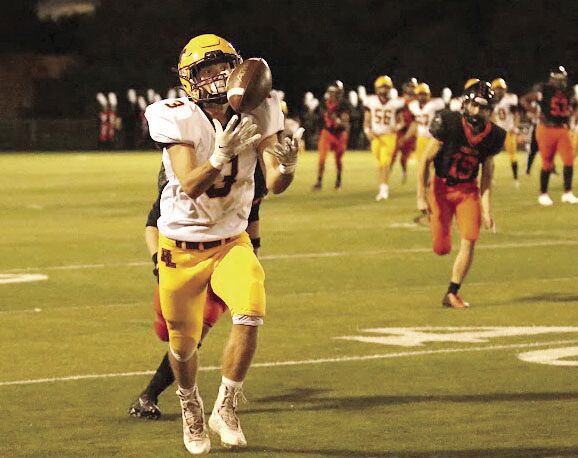 Junior Jake Johnson concentrates as he hauls in a 60-yard touchdown pass from Keagan Zeidler just before halftime. 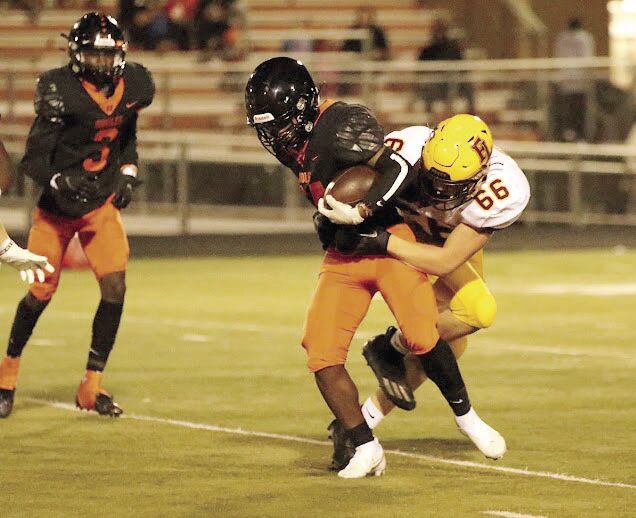 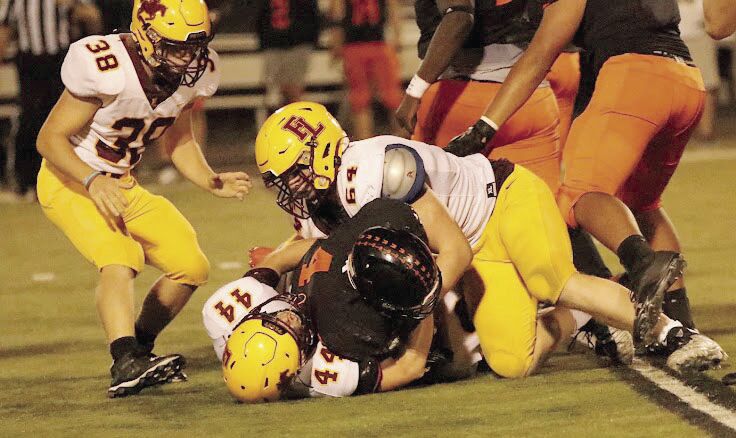 Senior linebacker Caleb Whitehill (No. 44) and junior defensive lineman Sam Mills (No. 64) bring down the Osseo ballcarrier just as senior Brandon Henk (No. 38) arrives at the schene. 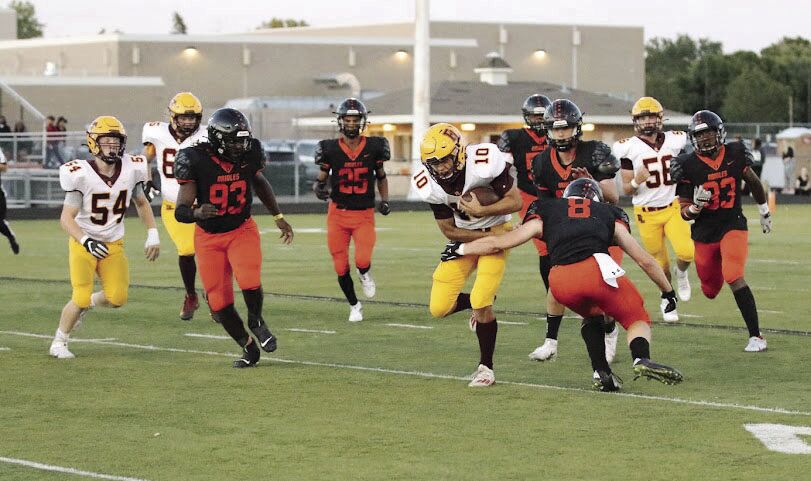 Junior quarterback Keagan Zeidler tries to break into the open field against Osseo. Zeidler completed 6-of-12 passes for 81 yards and one touchdown with one intercepion.

Junior Jake Johnson concentrates as he hauls in a 60-yard touchdown pass from Keagan Zeidler just before halftime.

Senior linebacker Caleb Whitehill (No. 44) and junior defensive lineman Sam Mills (No. 64) bring down the Osseo ballcarrier just as senior Brandon Henk (No. 38) arrives at the schene.

Junior quarterback Keagan Zeidler tries to break into the open field against Osseo. Zeidler completed 6-of-12 passes for 81 yards and one touchdown with one intercepion.

Yes, the Forest Lake football team suffered a 46-20 loss at Osseo on Friday, Sept. 17, a setback that dropped the Rangers’ season record to 0-3.

But coach Sam Ferraro said he and the team remain positive that the season can turn around.

“I still see a lot of positive attitudes within our football program,” Ferraro said. “I talked with our captains, and they said the team still believes it can win games. They believe they could have beaten both Anoka and Osseo, had we not beaten ourselves.”

The way the Rangers beat themselves at Osseo was by allowing the Oriole offense to roll for 372 yards on the ground, an average of 7.8 yards per play, to finish with 410 yards of total offense.

The Orioles scored first on a 6-yard TD run by B.J. Zakiel midway through the first quarter, but Forest Lake tied the game when senior Cole Brisbois found the end zone on a 2-yard plunge at the 9:37 mark of the second period.

Then Osseo exploded, finding the end zone three times in a five-minute span, including a 47-yard scoring run by T.J. Clay and a 39-yard TD gallop by Zakiel.

“When it rains, it pours, and in that span we allowed Osseo to make three big plays against us – two on offense and one on defense,” Ferraro said. “I have to take the blame for this loss, because at halftime we made a [defensive] adjustment that helped slow them down in the second half.

Osseo scored twice in the third quarter to pull away, although the Rangers did score the game’s final touchdown on a 3-yard run by junior Trystian Miller with a little under two minutes to play in the game.

Forest Lake finished with 205 yards of total offense, with 120 of those yards coming on the ground. Brisbois carried the ball 11 times for 46 yards, while senior quarterback Ryan Olson had five carries for 44 yards.

Zeidler had 81 of the Rangers’ 85 yards passing, completing 6-of-12 attempts with a touchdown and an interception. Johnson was the leading receiver with two catches for 66 yards.

The Forest Lake defense played without senior standout Charlie Peterson, but Brisbois stepped in and played well, tying for the team lead with 6.5 tackles, including six solo stops.

“Charlie has a little bit of a shoulder injury, and he tried to get ready [to play] in warm ups, but he just couldn’t do it,” Ferraro said. “But Cole Brisbois stepped in and did a good job filling in, especially when you consider Cole was a two-way player for us.”

Sophomore Mark Rendl also had 6.5 tackles for the Rangers, while senior Caleb Whitehill finished with six stops. The Rangers’ youth on defense was highlighted by that tackle chart, which had only two seniors among the top seven tacklers, a group that included three sophomores in Rendl, Nolan Dumonceaux and Leyton Patzer.

“We have talent, but we have young talent,” Ferraro said. “We have a lot of players on the field defensively who are young in both age and experience.”

Now Forest Lake will play at Mounds View on Friday, Sept. 24, in a contest scheduled to kick off at 7 p.m. Ferraro said he and the team are focused strictly on what they can control this week, which is their preparation for the game against the Mustangs.

“We talked as a team about not worrying about the past, and not focusing on the future – our goal is to be 1-0 this week,” he said. “Let’s just win the games we have this week, whether it’s the varsity or the JV or any of our teams.

“And we had a good practice to start the week [Monday], with guys flying around and working hard.”