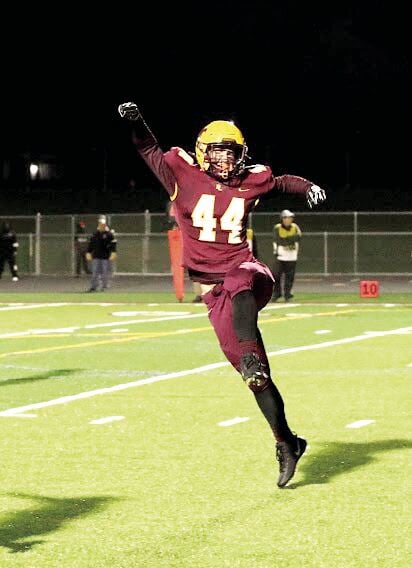 Senior Caleb Whitehill jumps for joy after he and the Forest Lake defense forced the incompletion of a fourth-down pass by Roseville in overtime that secured the Rangers’ home victory. 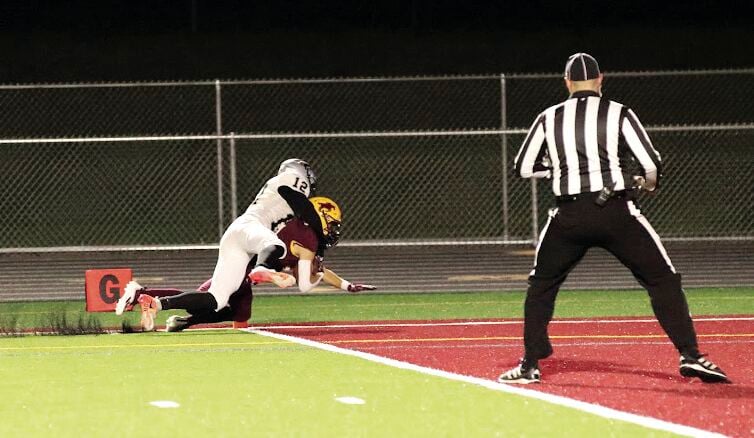 Junior wide receiver Jake Deeb carries a Roseville defender on his back into the end zone to score the fourth-quarter touchdown that eventually tied the game at 20-20. 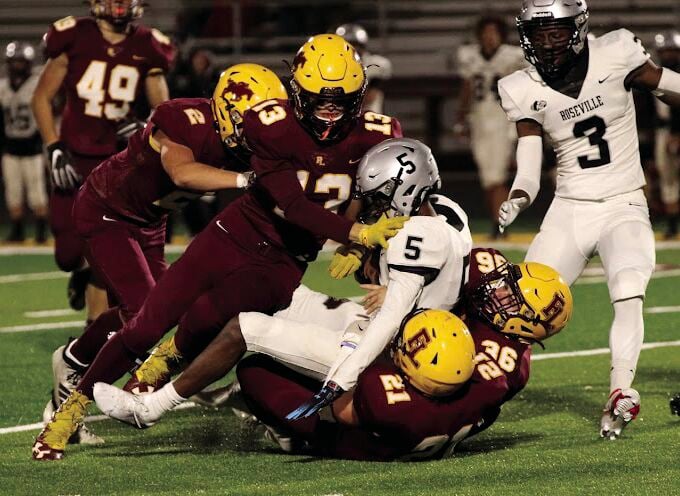 A posse of Rangers, including junior Eric Knies (No. 2), senior Gavin Rustad (No. 12), senior Leo Kressin (No. 21) and senior Cameron Hagland (No. 36) combine to bring down the Roseville ball-carrier.

Senior Caleb Whitehill jumps for joy after he and the Forest Lake defense forced the incompletion of a fourth-down pass by Roseville in overtime that secured the Rangers’ home victory.

Junior wide receiver Jake Deeb carries a Roseville defender on his back into the end zone to score the fourth-quarter touchdown that eventually tied the game at 20-20.

A posse of Rangers, including junior Eric Knies (No. 2), senior Gavin Rustad (No. 12), senior Leo Kressin (No. 21) and senior Cameron Hagland (No. 36) combine to bring down the Roseville ball-carrier.

The Forest Lake football team could feel the wall rubbing up against their backs.

Roseville had driven to the Rangers’ 23 with only seconds remaining in their Friday, Oct. 15, contest, and the Raiders were about to attempt a field goal that would break a 20-20 tie.

“Before the field goal, the team was both nervous and confident,” sophomore Leyton Patzer said. “We all knew our jobs and what we had to do. We practiced it a hundred times, and we just had to execute.”

And that’s what Patzer did, knifing through the Roseville field-goal unit to block the kick.

“I just went for the ball,” he said. “I got touched but not really blocked, and I knew I had to fly through as fast as I could. The ball hit the tricep on my right arm.”

With that block, the Rangers grabbed the game’s momentum and rode that advantage to claim a 27-20 overtime victory.

“I didn’t know if their kicker had the leg or not, but our guys said they would handle it,” coach Sam Ferraro said. “This was a little closer than I would have liked, but at key times our guys stepped up and made plays when they had to.”

In high school, overtime allows each team to get the ball on its opponent’s 10-yard line with four plays in which to score. Forest Lake got the ball first in overtime and needed just two plays to find the end zone as senior Cole Brisbois scored on a 7-yard sweep.

When Roseville got the ball, senior Peyton Christenson made a fine play to tackle a Raider ball carrier 3 yards behind the line, and the three incompletions that followed sealed the win.

“After we scored, and then we blocked the kick, I think the offense and defense both really fed off that,” senior quarterback Ryan Olson said.

The Rangers built an early lead thanks to a 16-play, 84-yard drive that culminated in a 1-yard quarterback sneak by junior Keagan Zeidler for a score at 8:21 of the second quarter.

Roseville tried a flea-flicker pass on the first play of its next possession, but junior Westin Hoyt intercepted the pass on his own 25, and on the next play Zeidler broke free for a 75-yard TD romp that made the score 12-0 with 8:08 left in the half.

The Raiders scored late in the period to make the score 12-6 at halftime, then added a touchdown on the opening drive of the third quarter to take a 13-12 lead. When Forest Lake punted on its next possession, Roseville drove 81 yards on 13 plays to score another TD and lead 20-12 with 8:31 left.

Things looked dire for the Rangers when they were forced to punt on their next possession, but the defense got a key stop and forced a punt with a little more than four minutes to play.

And the offense then stepped forward with a critical touchdown drive that tied the game with just 2:37 on the clock. Olson completed a 15-yard pass to senior Leo Kressin on a critical fourth-and-5 play from midfield, and two plays later he connected with junior Jake Deeb on a pass that saw Deeb break several tackles and reach the end zone for the game-tying TD.

“The defense didn’t play great in the third quarter, but the offense stepped up and made some plays in the fourth,” Ferraro said. “We needed that. We haven’t had a lot of that, and we got that in this game.”

Roseville made things scary with its late drive for a potential game-winning touchdown, but Patzer’s block and the overtime performance on both sides of the ball ensured Forest Lake’s second win of the season.

“It feels great to get this win,” said Olson, who completed 6-of-7 passes for 80 yards. “We’ve been in some close games this year and haven’t won them, so it was great to finally get the job done.

The Rangers finished with 293 yards of total offense, including 181 yards rushing as Brisbois carried the ball 25 times for 120 yards while Zeidler finished with 77 rushing yards on just four carries.

Forest Lake hosts Lakeville North, which has an identical 2-5 record, on Thursday, Oct. 21. Kickoff is set for 7 p.m.