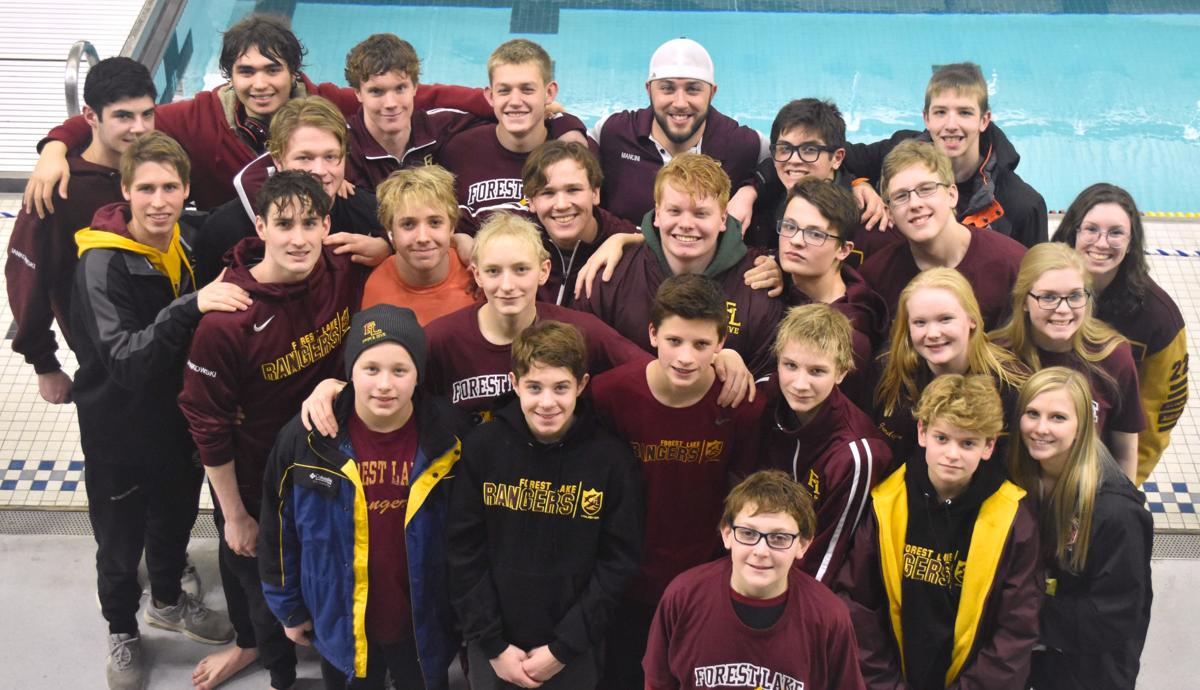 The Forest Lake boys swimming and diving team stands together at the conclusion of the Class AA True Team state meet at the University of Minnesota on Jan. 25. 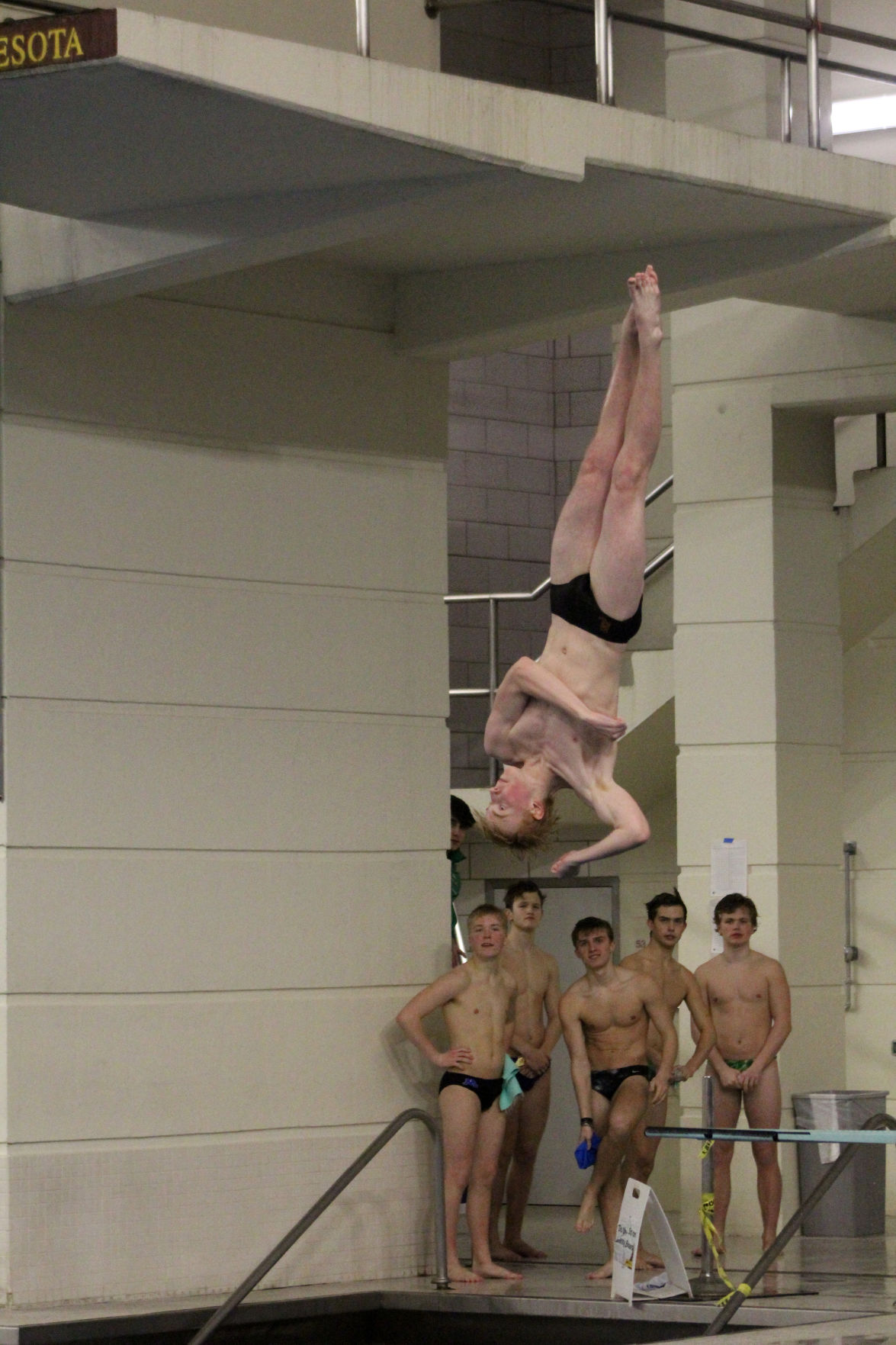 Senior Andrew Jensen broke the all-time Ranger record for six dives at a dual meet on Jan. 23, then finished 10th at the True Team state meet only two days later. 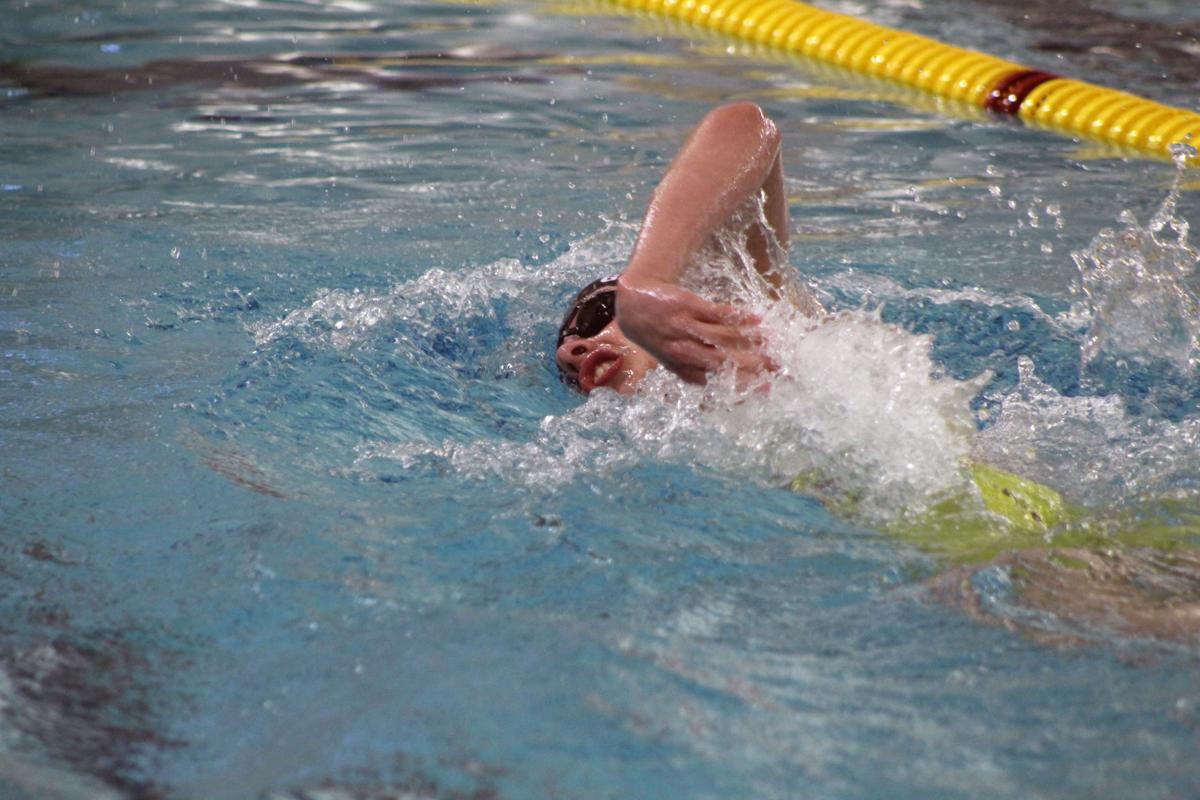 Freshman Joseph Galsworthy slices through the water in the 500-yard freestyle.

The Forest Lake boys swimming and diving team stands together at the conclusion of the Class AA True Team state meet at the University of Minnesota on Jan. 25.

Senior Andrew Jensen broke the all-time Ranger record for six dives at a dual meet on Jan. 23, then finished 10th at the True Team state meet only two days later.

Freshman Joseph Galsworthy slices through the water in the 500-yard freestyle.

The Forest Lake boys swimming and diving team took its accustomed place as the Section 7AA representative at the Class AA True Team state meet at the University of Minnesota on Jan. 25, a place the Rangers have visited in the True Team context five times in the past six seasons.

“We had a pretty good performance, and we had some pretty good swims,” head coach Dominick Mancini said. “I think we have a lot more in us, and I think as the year goes on, we’ll get better and better.”

Whereas some coaches will change their usual dual meet lineup for True Team purposes, Mancini mostly kept his athletes in their strongest events.

“We wanted to put guys in their prime events and give them the best chance to swim fast,” Mancini said. “We’re coming up on sections soon, so we want guys focusing on their best events and they can prove themselves.”

Twelve teams times four entries meant events were generally composed of 48 competitors or relay teams, barring a short roster or a scratch here and there.

A total of 16 swimmers could compete in each relay, since the True Team format called for each team to enter up to four groups per relay event. The leading quartet in the 200-yard medley relay was Chatwin, True, Henderson and Jarosz, who combined to finish 11th in 1:41.74. The top squad in the 200-yard freestyle relay was composed of senior Kalel Rodriguez, senior Cullin Schwintek, sophomore Riley Jankowski and Waskey (24th, 1:37.19). Best for the maroon and gold in the 400-yard freestyle relay were Henderson, True, Chatwin and Jarosz (15th, 3:26.01).

Since everyone scores in a True Team meet, and because the format calls for contributions from the top to the bottom of the roster, it seems only appropriate to list every Ranger that competed in the state pool. Beyond those named already, the Ranger swimming roster also included junior Logan Rachel; sophomores Devin Johnson and Brody McGovern; freshmen Joseph Galsworthy, Cohen Robertson, Riley Siedow and Brayden Thompson; eighth graders Robert Bour, Sam Trocke and Evan Wood; and seventh graders Eric Gregoire and Gus Johnson.

“We made a point to get a lot of our younger guys into some relays to give them a chance to see [the U of M pool, which is also the MSHSL state venue],” Mancini said. “Giving the younger guys the chance to see what the pool is like and state competition is like will give them that extra push and motivation.”

The best placement in any event at the True Team meet was collected by senior Andrew Jensen in 1-meter diving, who was awarded 293.15 points for 11 dives. Classmate Nick Niemi also reached the diving finals, placing 13th with 281.75 points. Freshman Deacon Andre finished 25th with 94.85.

The state dive came just two days after Jensen put together the all-time greatest performance in Ranger history for a six-dive competition. In a Jan. 23 dual meet at White Bear Lake, which the Rangers won by a score of 96-81, Jensen carded a total score of 295.55 points, beating, by three-quarters of a point, the standing Forest Lake record of 294.80, held by Connor Florand since 2010.

Jensen’s all-time dive continued the Rangers’ general assault on the school record board, which has more or less been completely rewritten since the start of the 2015-16 season.

Depending on how quickly the new name and score panels can be created, fans might be able to see Jensen’s name and mark on the big board when the Rangers host Cretin-Derham Hall for a dual meet Thursday at 6 p.m., the team’s only competition this week.