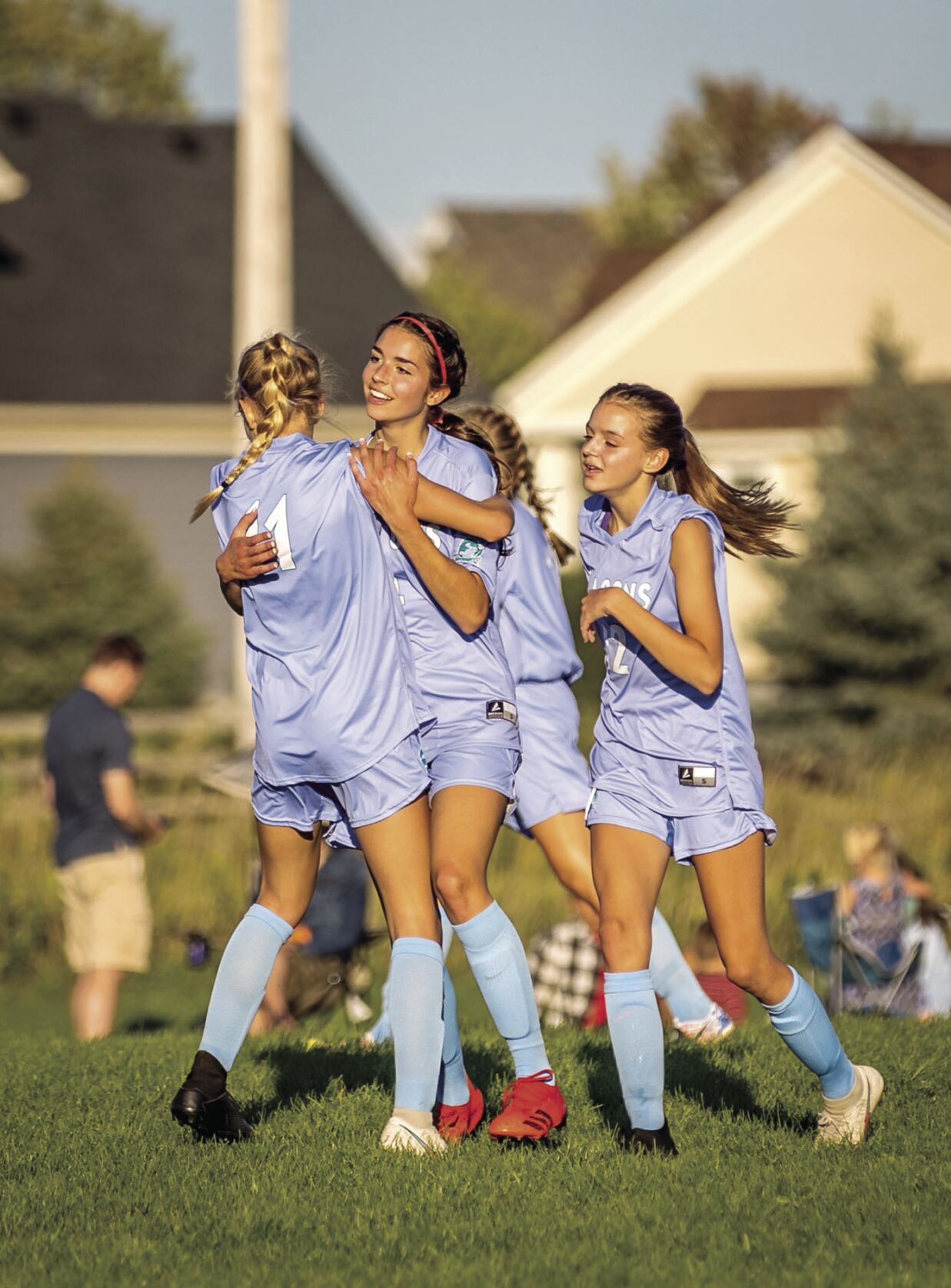 The Dragons celebrate after scoring a goal in a match earlier this season. LILA has celebrated a lot this year, as it averages seven goals scored per game. 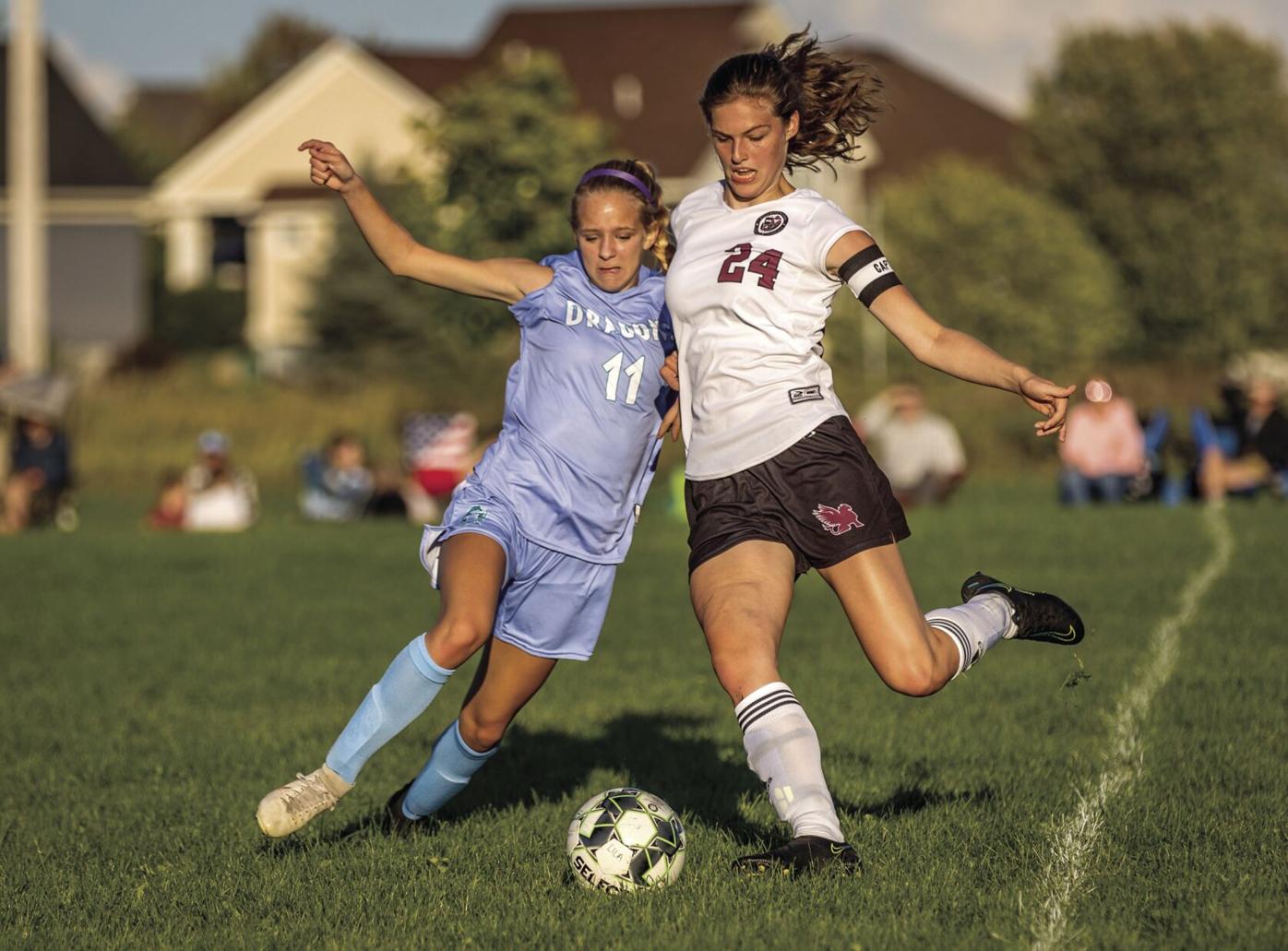 Senior Briana Henaman, wearing No. 11 in blue, challenges for the ball in a match earlier this season. Henaman scored 24 goals in the Dragons' first 10 games this season. 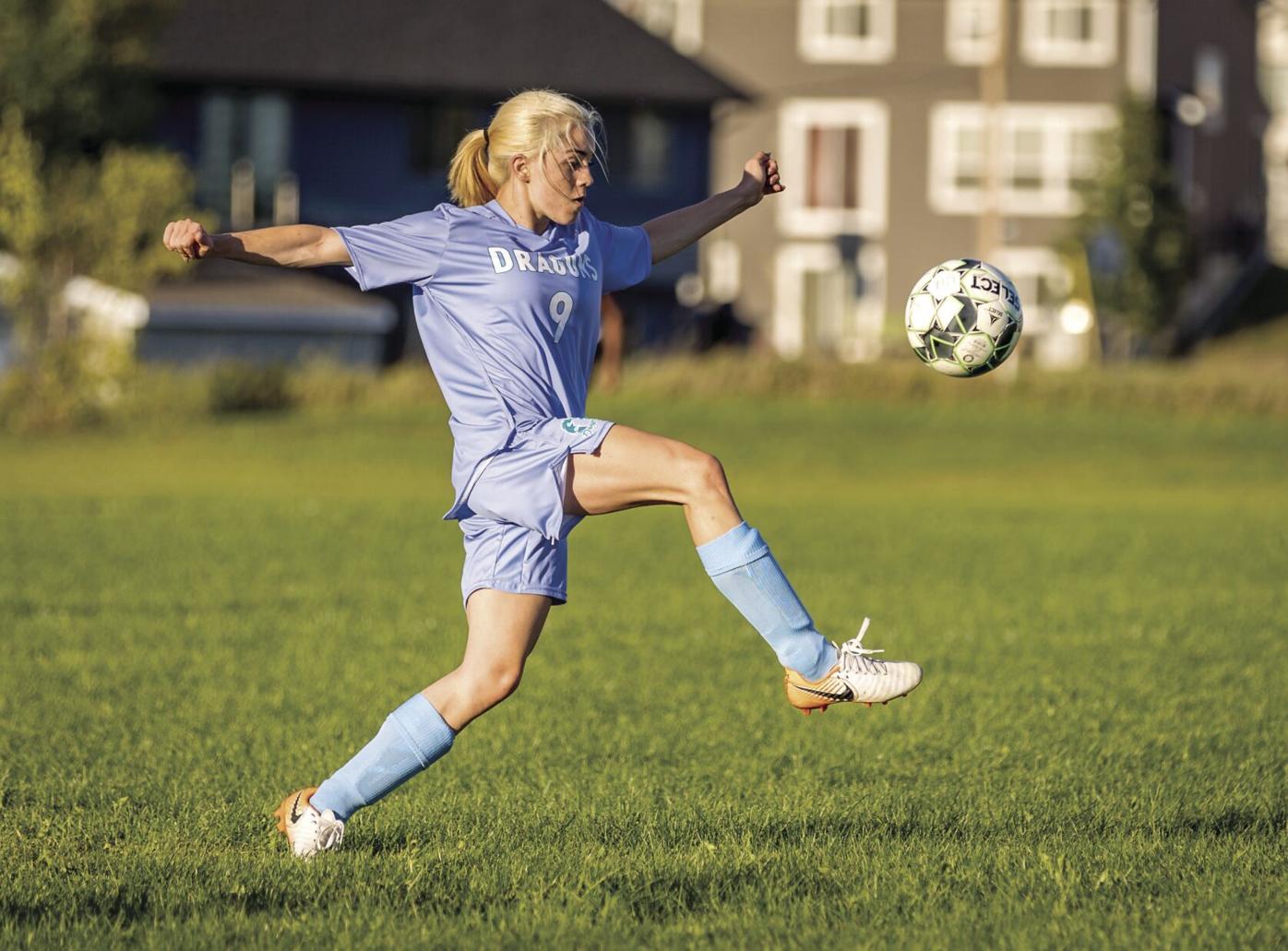 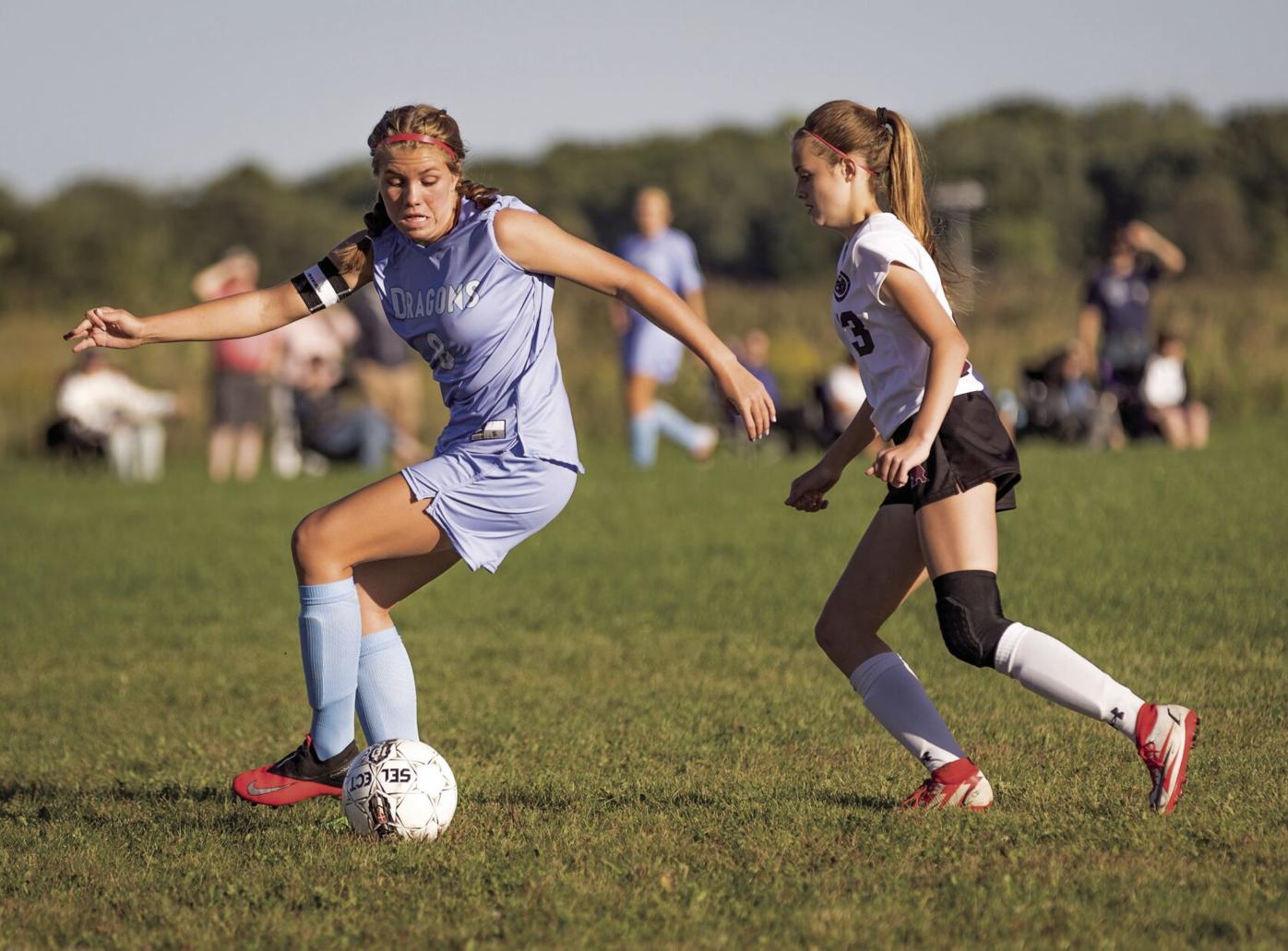 Junior Grace Timm, left in blue, has scored eight goals in LILA's first 10 games this season while serving as the backbone of the defense, according to coach RIck Sexton.

The Dragons celebrate after scoring a goal in a match earlier this season. LILA has celebrated a lot this year, as it averages seven goals scored per game.

Senior Briana Henaman, wearing No. 11 in blue, challenges for the ball in a match earlier this season. Henaman scored 24 goals in the Dragons' first 10 games this season.

Junior Grace Timm, left in blue, has scored eight goals in LILA's first 10 games this season while serving as the backbone of the defense, according to coach RIck Sexton.

“Because LILA was a school that started [only] with [students in] the younger ages, it took a while for the pipeline to grow,” coach Rick Sexton said. “Right now there are four seniors and two juniors on the team, and there are a large number of underclassmen on the varsity roster.

“And the middle school roster has 22 players in the sixth, seventh and eighth graders, so the future is bright. But there were enough players to have a viable team this year, so we have one.”

In previous seasons LILA has fielded a co-op team with North Lakes Academy. So Sexton, a club soccer coach for roughly 20 years, realized he would have to temper his expectations for the club’s first season, a feeling compounded by the team’s youth: the Dragons’ 18-player roster has 10 players who are freshmen or younger.

“I didn’t know the players or the school, and it was a new culture. And obviously there is COVID-19 in the background,” he said. “So my goal was to put together a team, get better every day, and have as much fun as possible.”

This season has been loads of fun for the Dragons, who entered a home contest against Legacy Christian on Tuesday, Oct. 5 with an 8-2 record.

LILA has boasted an impressive offense that has scored a whopping 70 goals in 10 games, including three in which the Dragons reached double figures.

Senior Briana Henaman leads the way with 24 goals while juniors Grace Timm and Elena Frost have 11 and eight, respectively to lead a roster in which 13 players have scored at least once.

“I can tell you that the team loves to attack,” Sexton said. “As soon as we gain possession, we look to move forward. We have two players in Elena Frost and Briana Henaman who complement one another very well. Elena is your traditional target striker who loves to get the ball and shoot. Briana is more of a creative playmaker who is fearless and willing to take people on.”

But the defense should not be ignored because the Dragons have allowed just 17 goals in their 10 contests – and six came in a loss to St. Paul Academy, the fourth-ranked team in the state in Class A.

The defense has been especially impressive when you consider that senior Eliana Broadway, the expected starter at goalkeeper, was hurt early in the season. Freshmen Abbey Neilson and Maria Revuelta Rodriguez have both played well in goal, allowing Broadway to heal more thoroughly rather than rushing back to action.

“I was concerned with Eliana was injured, because she was really a senior leader of our defense,” Sexton said. “But she has come back recently, and it has been great to have her back because she helps the team mentally.

“Grace Timm is clearly the leader of our defense from her midfield spot and is a backbone of our team. She is a very reliable defensive midfielder who has the ability to mark opponents while also delivering the killer pass to start the attack.”

Sexton said even the lopsided loss to state-ranked St. Paul Academy, a 6-0 setback on Saturday, Oct. 2, should help this young team improve.

“We felt we had a good game plan, but we got punched in the face when they scored in the first 90 seconds,” he said. “St. Paul Academy had a really nice crowd at the game, and many of our girls had never experienced anything like that at a soccer game before.

“We regrouped at halftime, and we only allowed one goal in the second half. It was a great experience, and we’ll learn from it.”

While LILA still has a few more games this season – a contest at St. Paul Washington on Thursday, Oct. 7, the Eastern Minnesota Athletic Conference tournament and then the Class A Section 7 tournament – Sexton admits it is hard not to dream on the Dragons’ future.

“That’s my weakness: I’m constantly peeking ahead,” he said with a laugh. “I try to get the team to simply focus on the next match. But I’m always looking ahead, playing matches on paper to see how we stand.