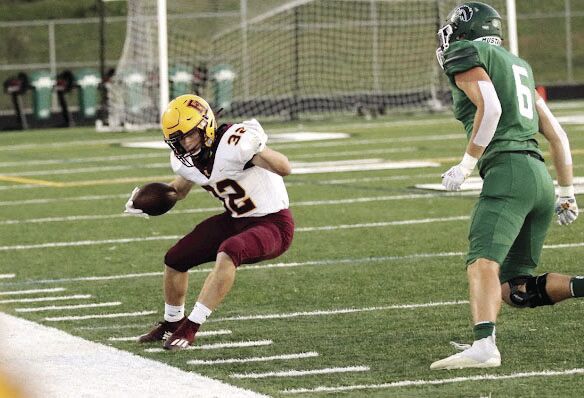 Senior Cole Brisbois tiptoes down the sidelines in the contest at Mounds View. Brisbois led the Rangers with 105 yards receiving and 41 yards rushing and finished with 161 all-purpose yards. 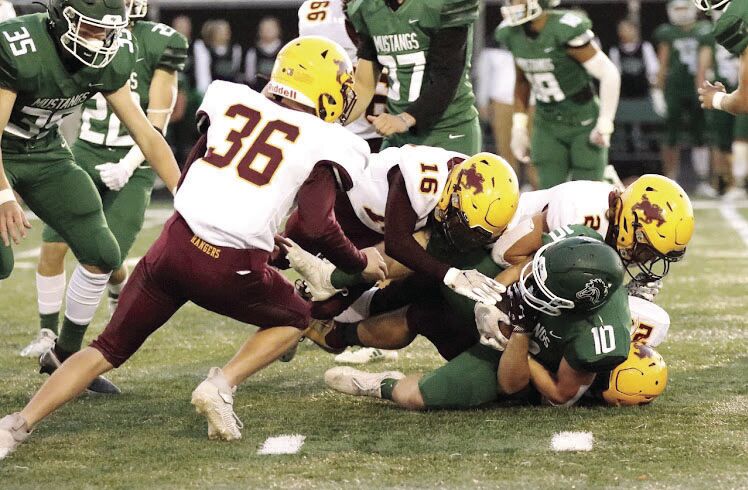 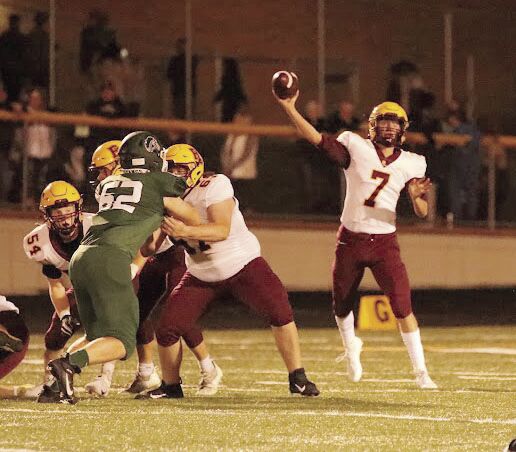 Senior quarterback Ryan Olson completed 13-of-21 passes for 202 yards with two touchdowns and one interception.

Senior Cole Brisbois tiptoes down the sidelines in the contest at Mounds View. Brisbois led the Rangers with 105 yards receiving and 41 yards rushing and finished with 161 all-purpose yards.

Senior quarterback Ryan Olson completed 13-of-21 passes for 202 yards with two touchdowns and one interception.

If Forest Lake football coach Sam Ferraro were not allowed to use the word “frustrating” to describe his team’s season, he might be at a loss for words.

Certainly the Rangers’ 23-13 loss at Mounds View on Friday, Sept. 24, qualifies as frustrating.

In that game, Forest Lake won many of the statistical battles against the Mustangs: The Rangers had more total offense, 273-236; they had the same number of turnovers, as each team finished with one interception; and Forest Lake won the time of possession battle by a wide margin, hanging on to the ball for almost 33 minutes while limiting the Mustangs to just 15 minutes.

“It certainly is frustrating to play well enough to win and not come out of that game with the ‘W,’” Ferraro said. “But we made mistakes at inopportune times, and they made a few plays at opportune times.”

But the rest of the first half belonged to Mounds View, which scored in the final minute of the first quarter to tie the contest, then got a field goal late in the second quarter to take a 10-7 halftime lead.

The Mustangs added to their lead with a short scoring pass late in the third quarter, then expanded their advantage to 23-7 with a TD toss midway through the final period.

Forest Lake cut the margin to 10 points when Olson completed a 57-yard touchdown pass to junior Jake Deeb with 3:17 still to play. But the Rangers were unable to come any closer in losing for the fourth straight week.

Mounds View finished with 236 yards of total offense, with 128 of those yards coming through the air. Senior safety Charlie Peterson led the Rangers with 10 tackles, including nine solo stops and two tackles for loss, while sophomore Mark Rendl and junior Sam Mills each had four solo tackles and 4.5 stops total.

“I thought in general the defense played well,” Ferraro said. “Mounds View had one run for 30 yards and one pass for 30 yards, and one fake punt for 30 yards. If you take away those three plays, we’ve limited them to 150 yards.”

The Forest Lake offense leaned heavily on the pass in the contest, gaining 202 of its 273 yards of total offense through the air. Olson completed 13-of-21 passes for 202 yards with two touchdowns and one interception; his favorite target was Brisbois, who caught seven passes for 105 yards.

Brisbois gained 41 of the team’s 71 net rushing yards as well.

“I thought the offense played well, but there were a few penalties at bad times,” said Ferraro, who noted that the Rangers were flagged eight times for 70 yards while Mounds View drew five penalties for 35 yards.

“In general we played well, but we would make mistakes at inopportune times, and that’s frustrating.”

Forest Lake now prepares for its homecoming contest against Hopkins at Ranger Stadium on Friday, Oct. 1, with kickoff set for 7 p.m.

“It’s a little bit helpful that this is a team that we played last year; but our kids also have a sour taste in their mouths, because this team gave them one of their two losses,” Ferraro said.

One thing the Forest Lake coach said he does not find frustrating is his team’s attitude, which remained upbeat at practice Monday.

“Our kids are still very positive,” Ferraro said. “They believe they should be 2-2, if not 3-1. They feel they are close to reaching the next level; they are as positive as a team with an 0-4 record can be.

“They know they’re getting better every week. But this needs to be the week where we don’t make mistakes and we make key plays at key times to win a game.”