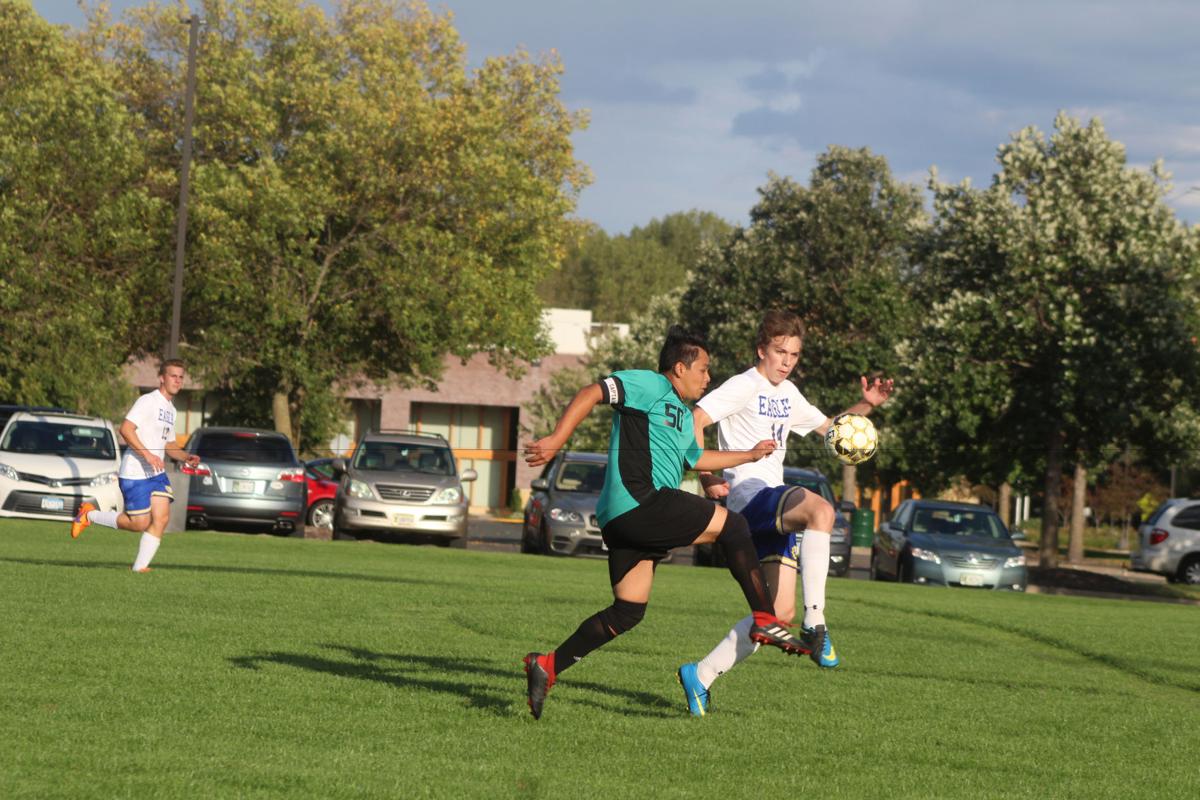 LILA junior striker Angel Garcia Silva battles for the ball with an AFSA defender in the Dragons’ 7-2 victory on Sept. 25. Garcia Silva scored three goals in the contest. 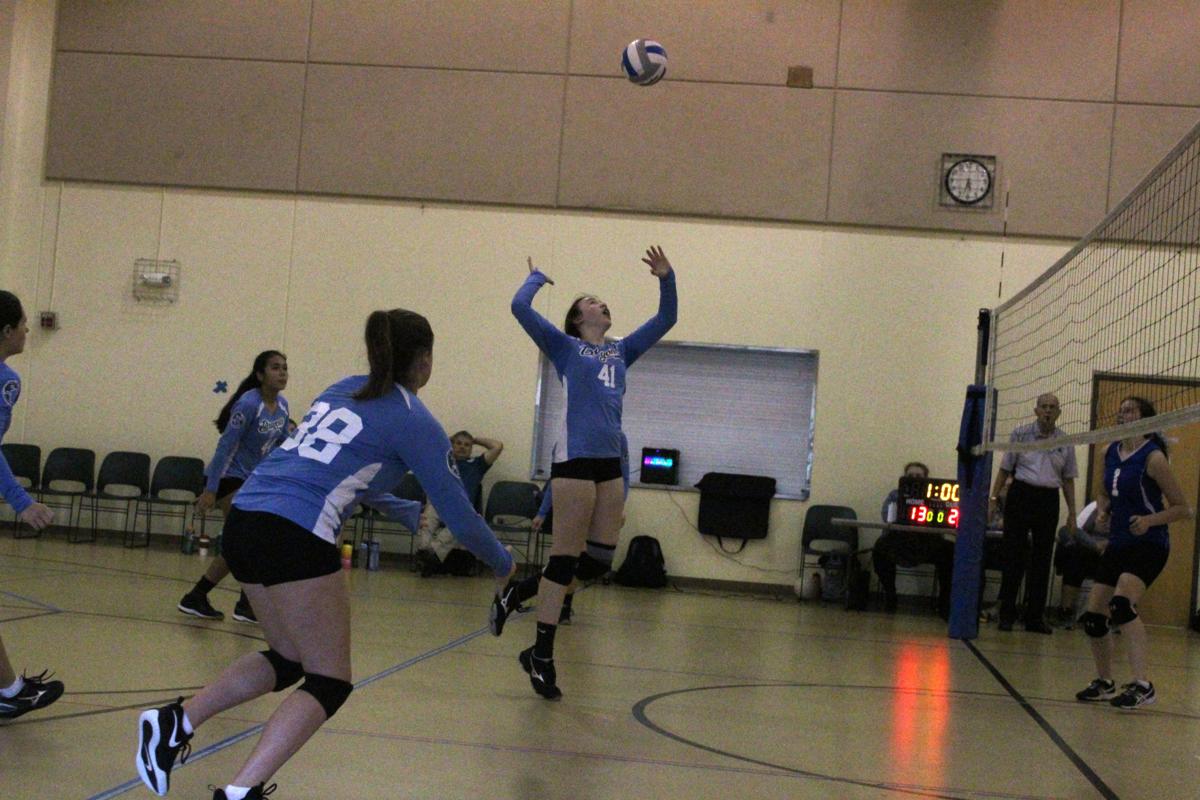 LILA sophomore Josie Lewerenz goes on the offensive in the Dragon volleyball team’s own win over AFSA on Monday. 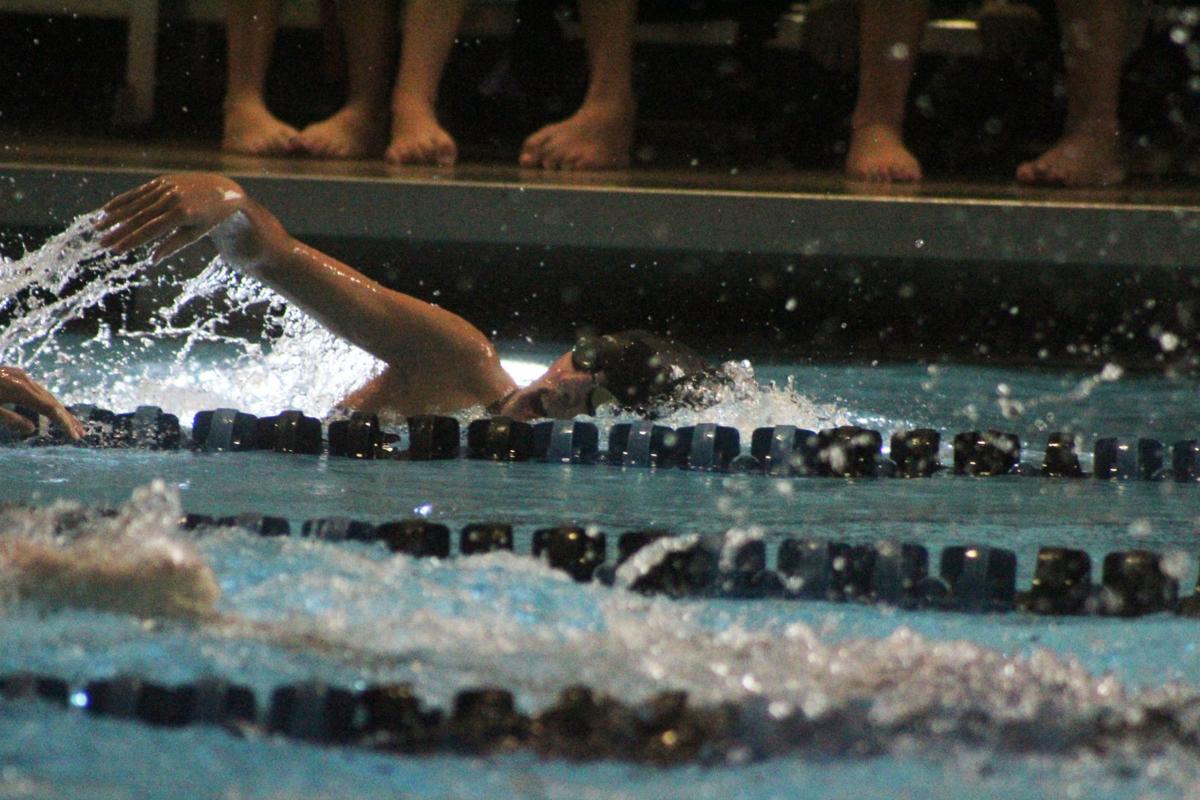 LILA freshman Kendle Mihm finished fifth against deep fields in the 50- and 100-yard freestyle races at the Tartan Invitational on Sept. 28.

LILA junior striker Angel Garcia Silva battles for the ball with an AFSA defender in the Dragons’ 7-2 victory on Sept. 25. Garcia Silva scored three goals in the contest.

LILA sophomore Josie Lewerenz goes on the offensive in the Dragon volleyball team’s own win over AFSA on Monday.

LILA freshman Kendle Mihm finished fifth against deep fields in the 50- and 100-yard freestyle races at the Tartan Invitational on Sept. 28.

This fall, Lakes International Language Academy is fielding triple the number of varsity teams as a year ago, with volleyball and girls swimming teams joining the established boys soccer squad. Each Dragon squad put up strong results in September: Here’s a look at how the immersion school’s teams have done, and what they hope to do in October and beyond.

Many of the players currently representing LILA in boys soccer have played together for several years, helping the school become a force at the junior high level before moving up last year.

At press time, the Dragons had put together a record of 4 wins, 2 losses and 1 draw, with a number of blowout victories in the first column, including a 7-2 drubbing of the Academy for Sciences and Agriculture on Sept. 25 at Vadnais Heights Community Park. Junior forwards Angel Garcia-Silva and Mason Janu each put away three goals in a half: Garcia-Silva in the first and Janu in the second. Junior Strom Norcrosse also bagged a goal.

The Dragons led 7-0 before a pair of lapses in the last 10 minutes allowed the Eagles to get on the board, though much too late to impact the general result. Junior goalkeeper Ethan Maring had very little to do on the day.

For all the success the Dragons have enjoyed so far, Garcia Silva, one of the captains, expects the team to grow together in October as the season winds down.

Despite playing at the varsity level last year, the Dragons did not enter the Section 7A tournament, but they’ll be in the field this year. Head coach Ryan Beagan and his players are excited to learn where they’ll be in the bracket for their first postseason run, set to begin next week.

“We’ve filled out our schedule, so hopefully we can get a good seeding,” Beagan said. “It would be great to have a chance to take a couple games.”

The Dragons were due to host Venture Academy on Tuesday and Minnesota Transitions Charter on Wednesday. On Monday, Oct. 7, they will honor their first-ever senior athlete, midfielder Noah Ryan, in a 5 p.m. start against Concordia-Roseville. They also have another game with AFSA scheduled for Wednesday, Oct. 9, at 5 p.m., ensuring that the Dragons will be battle-tested before the The Section 7A tournament commences on Thursday, Oct. 10.

Much of what was written about the boys soccer team applies to the volleyball team, which holds a record of 6-1 so far in its first varsity season. The players have been together for years at lower levels of competition, which has enabled them to hit their often older opponents hard at the varsity level.

“This same group of girls has been together for five years,” head coach D.J. Gregory said. “They’ve gone up against bigger schools in tournaments in their earlier years, so they’re used to teams that are able to do more, so that doesn’t scare them.”

“We’ve mostly all known each other since kindergarten,” sophomore middle hitter Josie Lewerenz said. “We work well together.”

Like their soccer counterparts, the volleyball team scored a comfortable win over AFSA, this one coming on Monday by a count of 25-5, 25-19, 25-19.

As the first set may suggest, the Eagles were highly disorganized in the early going, allowing nine aces, including five in a row by Lewerenz. Lewerenz and classmate Erika Johnson are the heavy hitters for the Dragons, and also put up matching four-ace runs in the third set.

“Consistent serving and defense are what’s important to us,” Gregory said.

Sophomores Lexi Buhl, Isabella Rodriguez and Elena Martinez-Dunbar each scored kills in the final set, assisted by passes from sophomores Mallory Pfingsten and Hailey Gregory. Sophomores are something of a theme on the Dragon roster.

“We have a young varsity team that’s playing against juniors and seniors,” assistant coach John Olszanski said. “Hopefully we’ll be peaking by [the section tournament].”

Of the Dragons’ six victories, five have come against fellow members of Section 4A. The team is looking forward to the playoffs, which will begin on Oct. 21 and run through Nov. 2.

“We’ll do what we can in sections this year, and we’re only going to get better in the future,” Gregory said.

The Dragons will have to get used to squaring off against larger schools: According to the Minnesota State High School League’s official 2019 enrollment counts, LILA (110 students in grades 9-12) is the smallest school in the state that fields its own swimming squad without joining another school in a co-op.

The early star for the Dragon swim unit is freshman Kendle Mihm, who finished fifth in two events at Tartan, racing fields of 63 swimmers in the 50-yard freestyle (26.71 seconds) and 55 swimmers in the 100-yard freestyle (59.62). Mihm also contributed to a point-scoring ninth-place performance in the 200-yard medley relay (2:19.19, with Tally Nesvold, Allison Gray and Kira Bergman). Gray brought in further points in the 100-yard breaststroke (14th of 54, 1:20.67). All three LILA relays hit season best times, and 13 individuals also beat their personal marks.

Without a home pool, the Dragons are running an all-away schedule and have been practicing at the YMCA pools in Forest Lake and Lino Lakes.

“[The YMCAs] have been great partners for our training,” Heins-Nesvold said.

The Dragons went to Tri-City United on Tuesday and will swim in the TUNA Invitational for grades 7-8-9 at Centennial on Saturday. The next major event is the Section 4A True Team meet on Oct. 12 at South St. Paul.