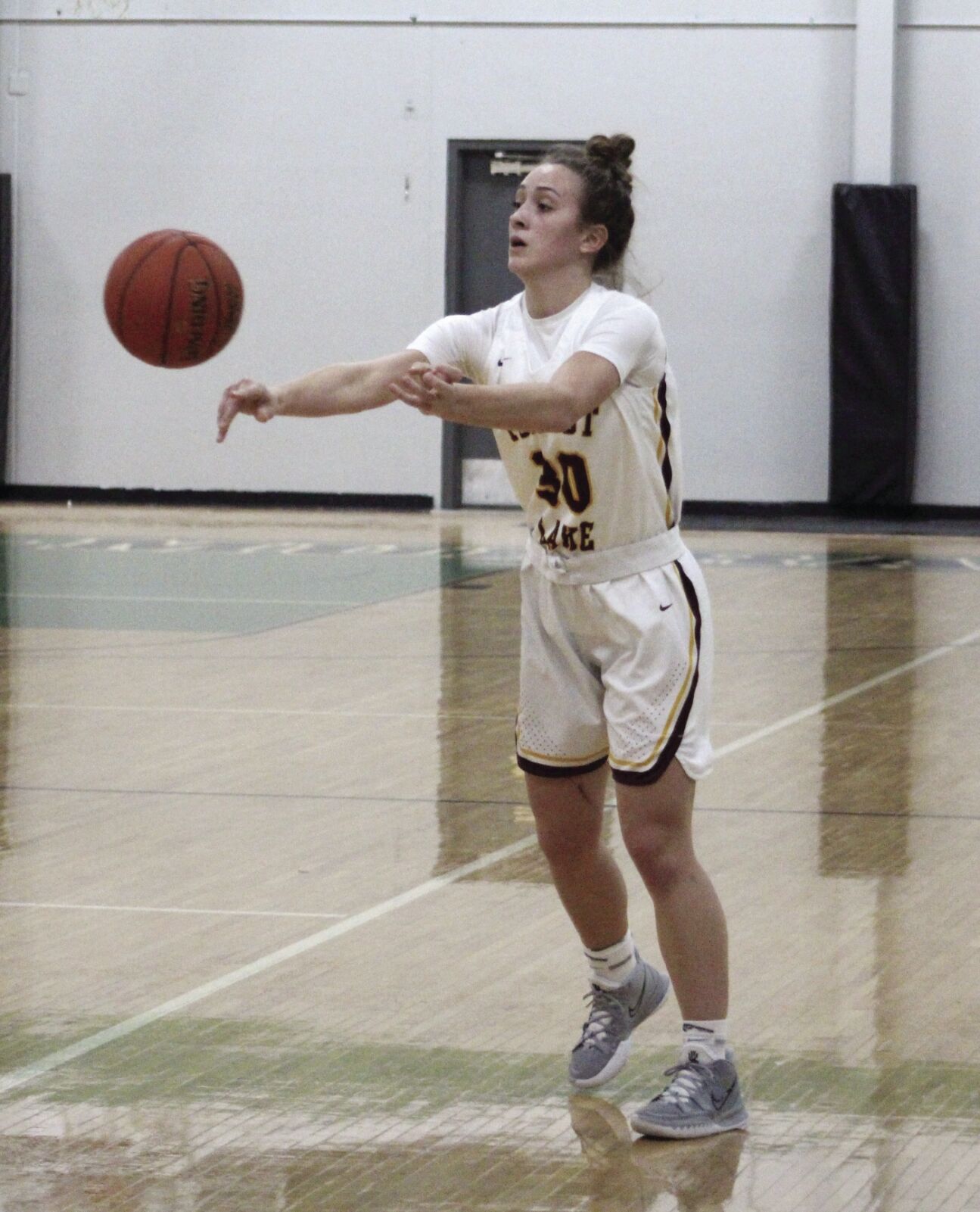 Freshman Amelia Espelien passes the ball during the first half of Forest Lake’s game against Hutchinson in the Hill-Murray Holiday Tournament on Thursday, Dec. 30. 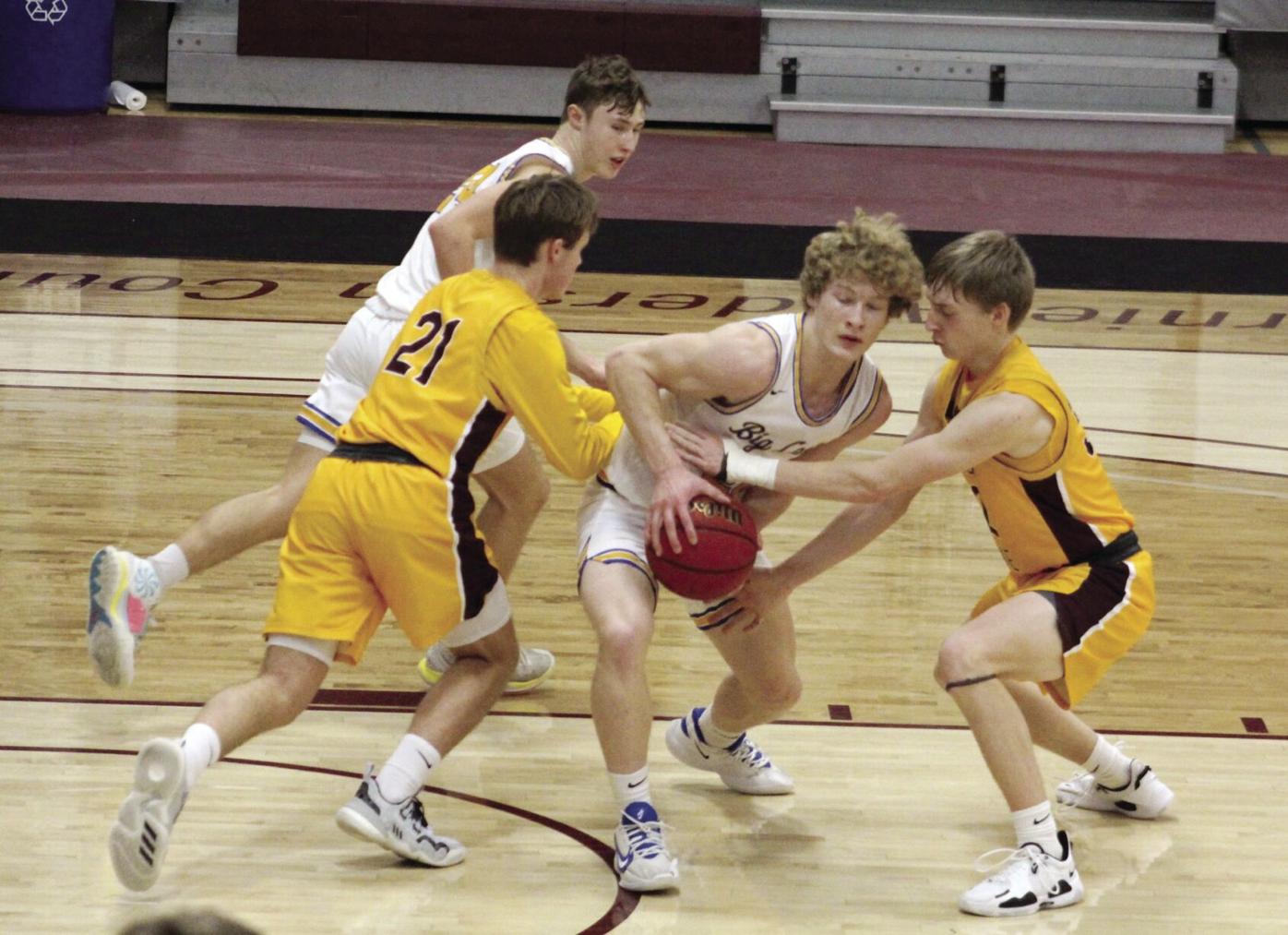 Forest Lake sophomore Reid Olson applies pressure to a Big Lake ball-handler during the late stages of the Rangers’ loss to the Hornets in the Twin Cities Orthopedics Holiday Tournament hosted by Augsburg University on Thursday, Dec. 30. 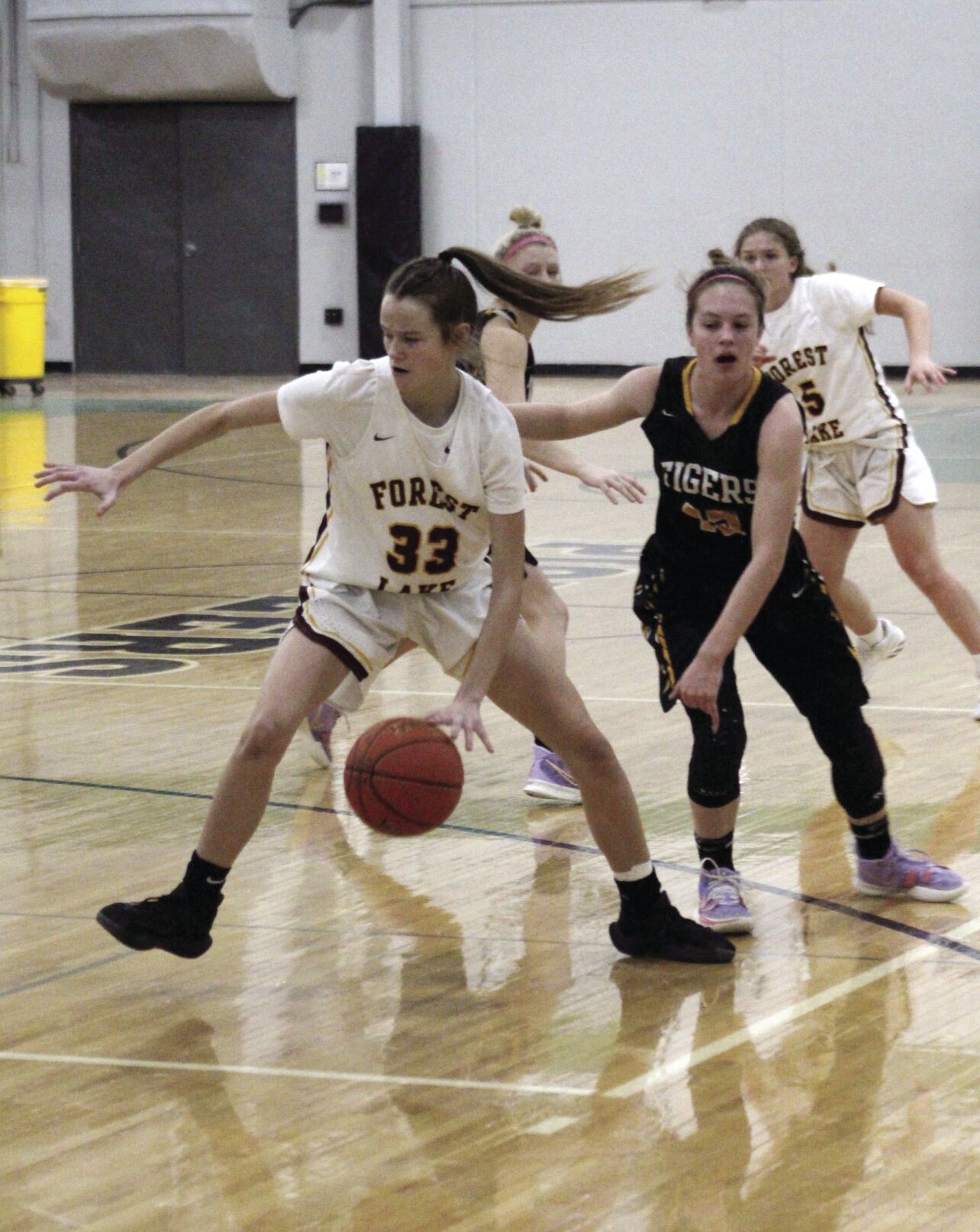 Sophomore Cassidy Pitzl gets past a Hutchinson defender.

Freshman Amelia Espelien passes the ball during the first half of Forest Lake’s game against Hutchinson in the Hill-Murray Holiday Tournament on Thursday, Dec. 30.

Forest Lake sophomore Reid Olson applies pressure to a Big Lake ball-handler during the late stages of the Rangers’ loss to the Hornets in the Twin Cities Orthopedics Holiday Tournament hosted by Augsburg University on Thursday, Dec. 30.

Sophomore Cassidy Pitzl gets past a Hutchinson defender.

The Ranger girls team won its opening contest at the Hill-Murray Holiday Tournament, then struggled against two of the better teams in the state.

Still, coach Dave Ostercamp has been pleased by the development of a young squad that has a number of underclassmen playing extensive varsity minutes.

“We’ve seen some growth, and we’re seeing some confidence develop,” he said. “But at times we fall back into old habits, and with a young team it’s tough to play three games in a row without any practice. The more practice we get, the better we will be.”

The Rangers opened the tournament with a 64-60 win over Fridley on Tuesday, Dec. 28. Senior Greta Krieger led the team with 19 points, while sophomore Cassidy Pitzl and freshman Amelia Espelien each added 13.

That win advanced Forest Lake into a contest the next day against Wayzata, which is ranked fifth in the state in Class 4A. The Trojans looked like a state title contender, rolling to a 44-15 halftime lead and cruising to a 60-25 win despite 12 points by Krieger.

After that loss, the Rangers tangled with Hutchinson on Thursday, Dec. 30, and lost 72-46.

Pitzl scored 15 points while Krieger had nine against Hutchinson. While the Rangers got offense from seven different players, no one else scored more than six.

“We’ll go into a drought, and that’s when our defense needs to be better,” Ostercamp said. “We’re looking forward to getting players moving, getting the ball moving and getting better on offense. When the ball doesn’t go in, it’s easy to panic, and that’s when things start to snowball.”

The girls were 4-7 overall and 2-1 in Suburban East Conference competition when the team faced Stillwater on Tuesday, Jan. 4, a contest that was not completed at press time. The Rangers will be on the road for their next three games, starting at East Ridge on Friday, Jan. 7.

“We handled the pressure St. Paul Johnson brought,” coach Kyle McDonald said. “They try to force turnovers, and we executed pretty well in that game.”

That advanced the Rangers into a semifinal contest the next day in which they ran into Hopkins, the team ranked No. 7 in class 4A. Senior Nick Bartlett scored 23 points while Waldoch added 17, but it was not enough to keep pace with the Royals, who won 75-58.

“We ran into a juggernaut in Hopkins,” McDonald said. “They have athletes, guys who will play in Division I and have a chance to play in the NBA.”

That dropped Forest Lake into the third-place contest against Big Lake on Thursday, Dec. 30. In that game the Hornets led 26-23 at the break, then built their lead to double digits before the Rangers were able to mount a bit of a comeback.

Forest Lake cut the deficit to four in the game’s late stages, but could come no closer and lost 66-58 despite 21 points from Bartlett, who was voted to the all-tournament team, and 19 from Waldoch.

“Big Lake is a well-coached team that made a lot of 3’s down the stretch, and we couldn’t make big plays when we needed them,” McDonald said. “Credit to them for making the plays.”

The boys were 2-6 overall and 1-1 in Suburban East Conference play entering a contest at Stillwater on Tuesday, Jan. 4, that was not completed at press time.

Forest Lake will return to action with home games against East Ridge on Friday, Jan. 7, and versus Cretin-Derham Hall on Wednesday, Jan. 12, with both contests starting at 7 p.m.

Forest Lake then plays at Irondale on Monday, Jan. 10, followed by a game at Cretin-Derham Hall on Wednesday, Jan. 12.