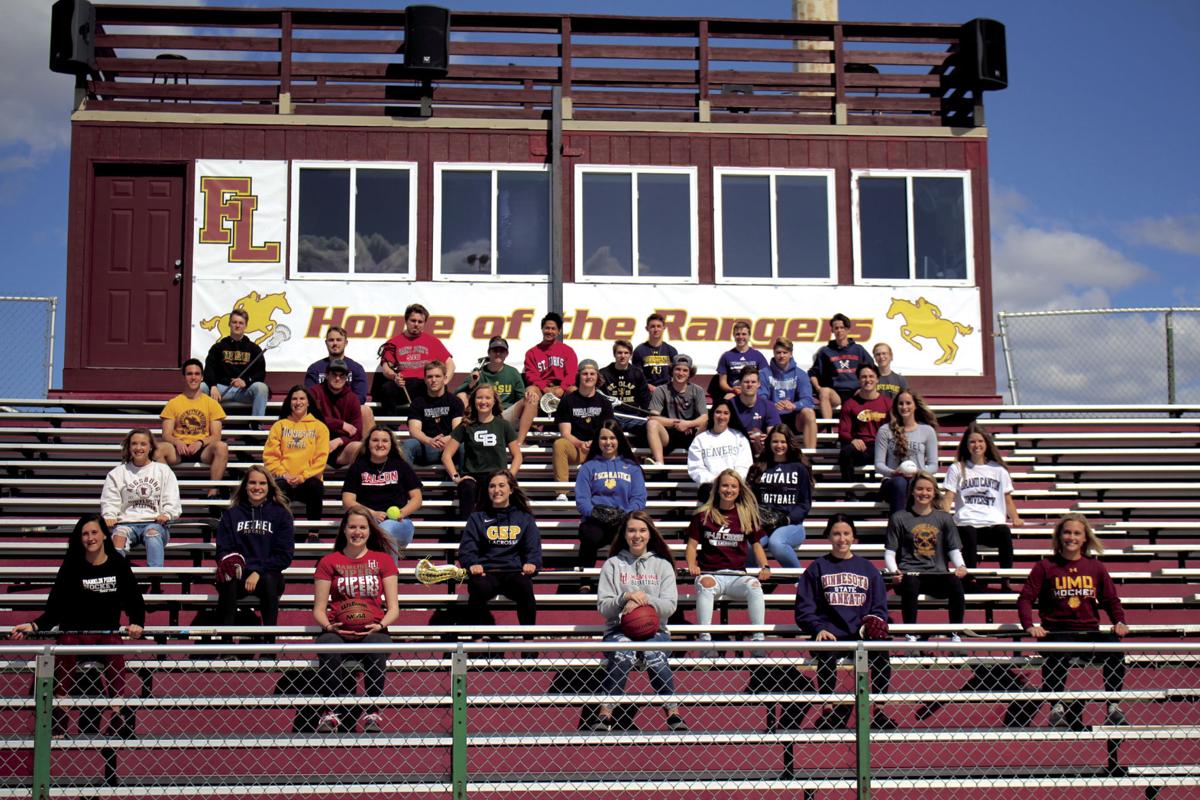 Social distancing brought about by COVID-19 forced these Forest Lake senior to distance themselves from one another during a group photo taken at the school's Signing Day event on Wednesday, May 5. 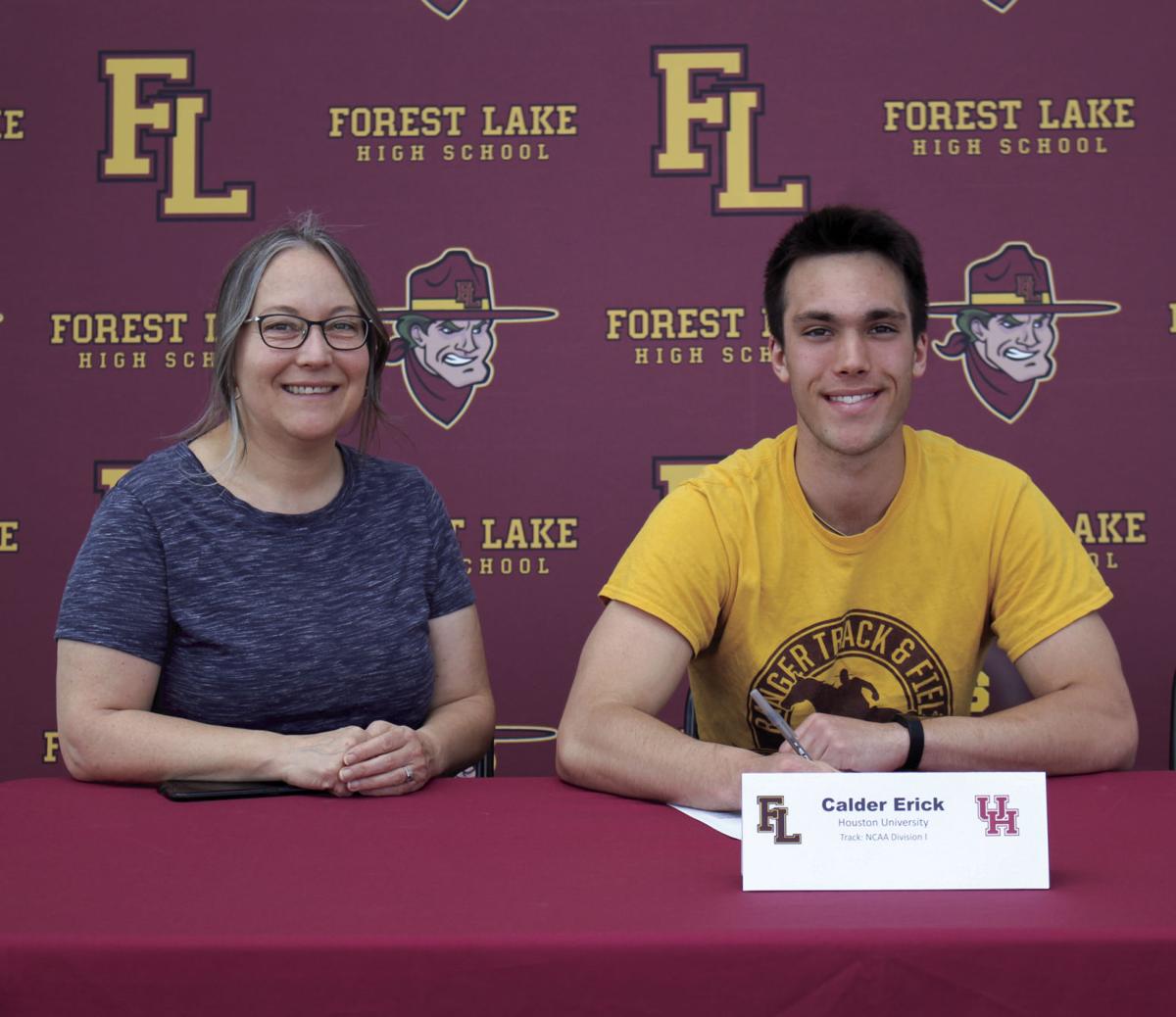 Calder Erick and his mother, Carmen Martin, pose as Erick signs with the University of Houston track program. 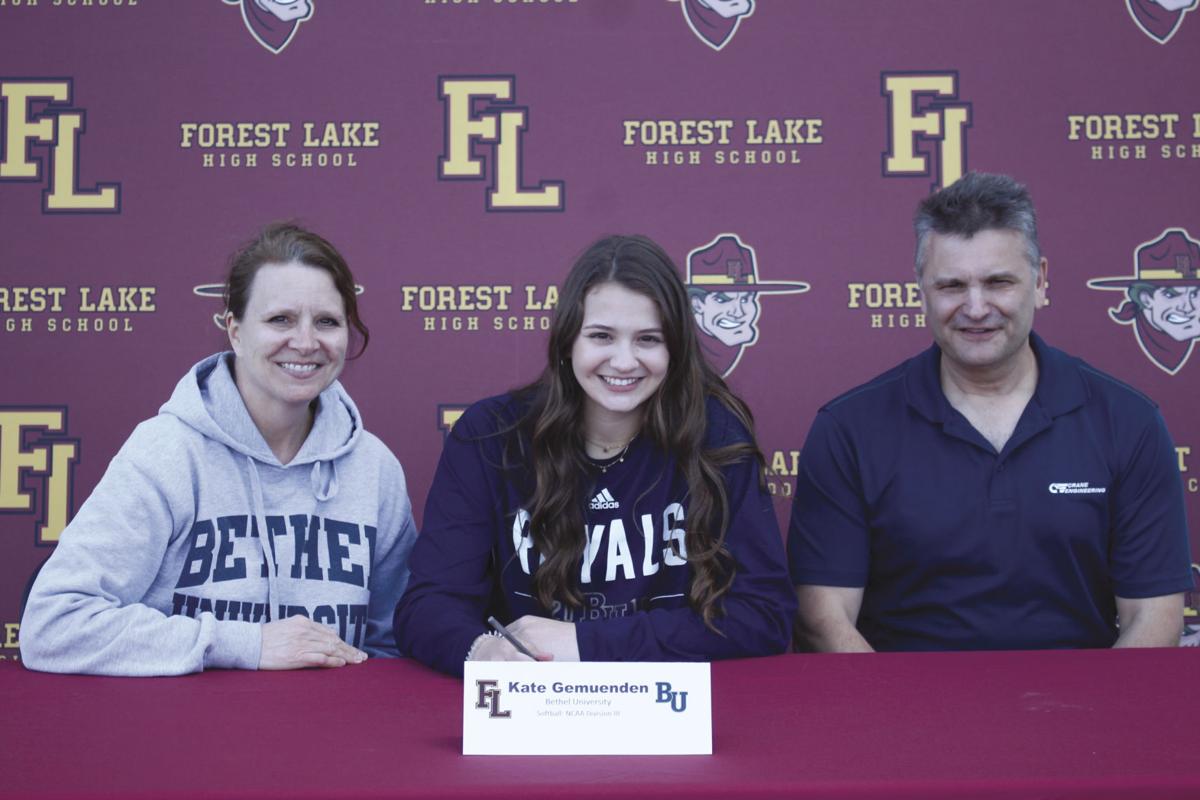 Kate Gemuenden, center, poses with her mother Carol and father Bob as she signs to play softball at Bethel University

Social distancing brought about by COVID-19 forced these Forest Lake senior to distance themselves from one another during a group photo taken at the school's Signing Day event on Wednesday, May 5.

Calder Erick and his mother, Carmen Martin, pose as Erick signs with the University of Houston track program.

Kate Gemuenden, center, poses with her mother Carol and father Bob as she signs to play softball at Bethel University

Each year around this time, Forest Lake Area High School honors its seniors who have decided to compete in athletics at the collegiate level.

This year the school honored its seniors on Wednesday, May 5, in a most unusual way.

Forest Lake brought a number of athletes together that day – and in this instance, “together” means to the high school – for a unique signing day ceremony. Roughly 40 student-athletes posed for a group photo, spread out in the bleachers facing the football field.

Then, one by one, each student was joined by family members to sign the documents that officially commit them to a college sports program.

“I wasn’t expecting Signing Day to happen,” senior Kate Gemuenden admitted. “So when I got the email about it, I was more than excited.”

But she had watched her older sister’s Signing Day, so she knew this year was different.

“When my sister signed, the whole softball team was in the library, and it was really crowded,” Kate Gemuenden said. “So this was kind of weird, being with just my parents. But I saw some teammates and coaches, and I loved having them there – even though we had to stay apart.”

For Kate Gemuenden, the recruiting process started in the summer after her freshman year.

“I sent some emails to some coaches of schools I really liked,” she said. “I was focused on a smaller number of schools – I knew I wanted to go to a smaller school, so I emailed the three or four I wanted. I wanted to go to a private, liberal arts schools. I liked the idea of playing Division III, because I think it is more school-focused, and I’m going to college for school first.”

Soon Gemuenden, who has played every position at Forest Lake except pitcher and catcher, focused on three schools — Bethel, St. Benedict and St. Thomas — before committing to Bethel.

“I chose Bethel because it is close to home, and I like that it is a Christian school, because it’s important to me to grow my faith,” she said. “They offered the programs I wanted academically, and it just felt like home there. I really liked the coaches and the team there, and one of my older sisters, Amanda, is going to be a senior there, so it will be great to play with her for one more year.”

The decision was a difficult one – and a recent one.

“I really liked all three schools, and it was a really hard decision,” Gemuenden said. “I thought about it all the time. … But then it was time to fill out the graduation slip just before Signing Day, and I knew it was time to decide.”

She viewed Signing Day as an opportunity to thank her parents, Bob and Carol Gemuenden, as well as other individuals who supported her both on and off the field.

“My parents have helped me academically, they’ve come to all of my games, they are my No. 1 fans, and they love me unconditionally,” Kate Gemuenden said. “They’re a big part of who I am today. I may be biased, but I think I’m the luckiest girl because I have the best parents ever. … And I definitely thank my coaches for helping me grow as an athlete and as a person. My teachers have helped me academically; they are some pretty awesome people. And I thank my friends and family and my teammates in volleyball and softball – they are amazing.”

For Calder Erick, the recruiting process began last summer when he competed in the USA Track & Field National Meet in Sacramento, California.

“There were a lot of colleges there, so I made contact with a lot of them,” Erick said. “Then over this winter I was training and made a lot of improvement, and more schools started to reach out to me.”

One of the colleges he connected with was Houston, a school he first came in contact with several years earlier.

“When I was in ninth grade, Houston had this YouTube channel called ‘Speed City,’” Erick said. “I was sprinter, and it looked pretty cool to me. Then in the summer I found out how good their program was, and I made contact with them.”

This spring Erick was hoping to compete in the sprints for Forest Lake while working on developing skills in the pole vault, long jump and hurdles. His goal at Houston is to compete in the decathlon, a combination of 10 events that includes four running events of different distance as well as the long jump, high jump, pole vault as well as the discus, shot put and javelin.

“My first year in club track I competed in one event in a big meet,” he explained. “I remember not liking having to be there all day just to compete in one event. I felt I wasn’t doing much. If you make it in decathlon, you’re competing in 10 different events, and I really liked that idea.”

The COVID-19 pandemic wiped out not only Erick’s senior track season, it delayed his signing decision.

“A lot of colleges were waiting for me to have some outdoor times,” he said. “They saw I was improving my times indoors, and they wanted to see if those improvements translated to when I competed outdoors. So yes, I was hurt by COVID-19. But I also know I couldn’t control that. What am I supposed to do? I’ll just play the cards I’ve been dealt and make the most of it.”

Erick plans to major in international business at Houston.

“I was looking for a program with good academics, because I can’t plan on becoming a pro,” he said. “And I wanted to join a program that was welcoming, and I feel Houston is that.”

On Signing Day he thanked his parents, Jeff Erick and Carmen Martin, for their support and encouragement during his career.

“My parents have been with me all the way,” Calder Erick said. “My ninth grade track coach, Paul Kendrick, was really encouraging, and Andy Richardson has been my varsity track coach and a big supporter as well. And my club coach, Kelly Snyders of the Minnesota Flyers, has helped along the way.”