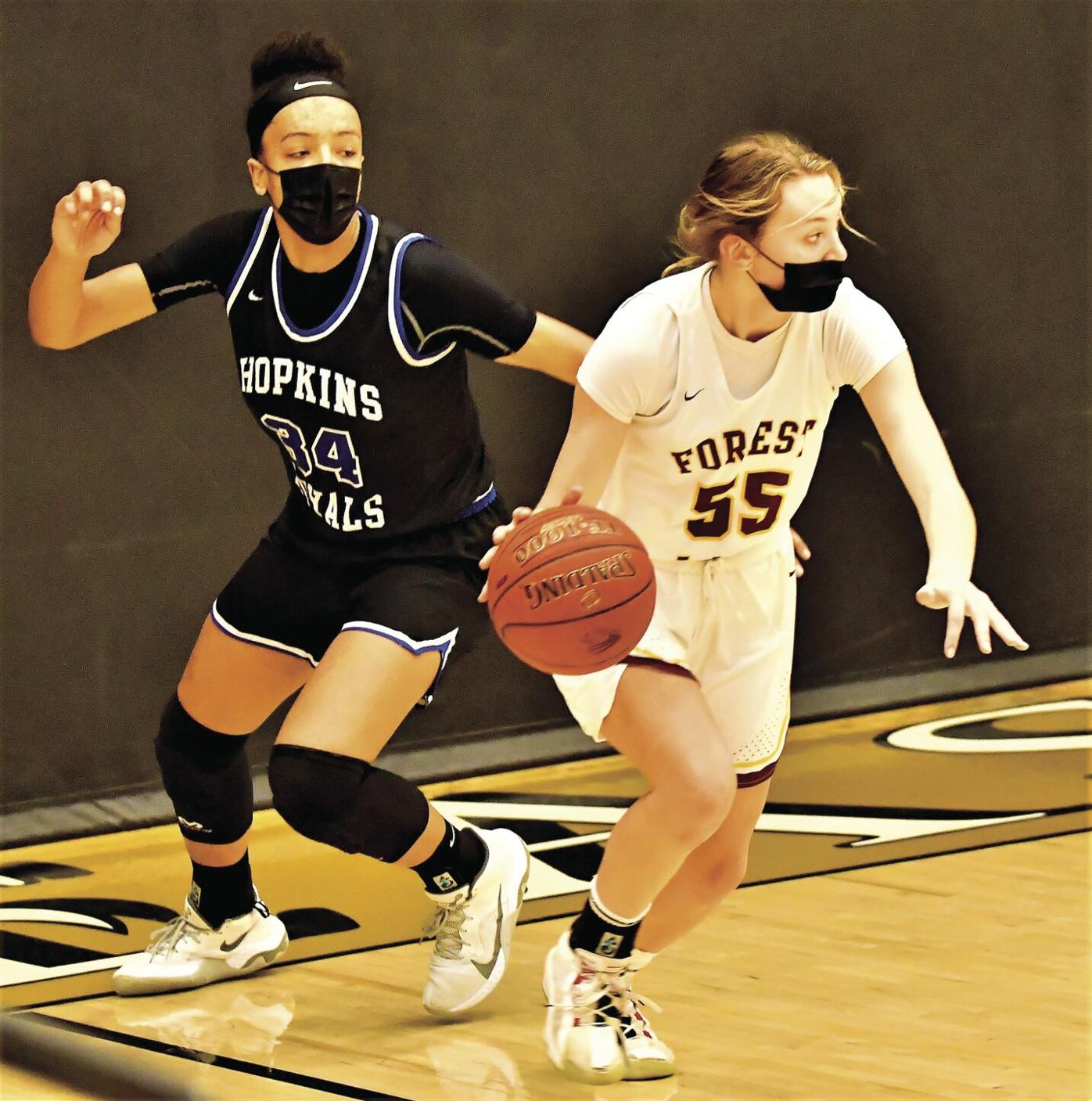 Senior captain Lulu Pekron dribbles the ball upcourt after snaring a rebound against Hopkins in the state tournament contest. 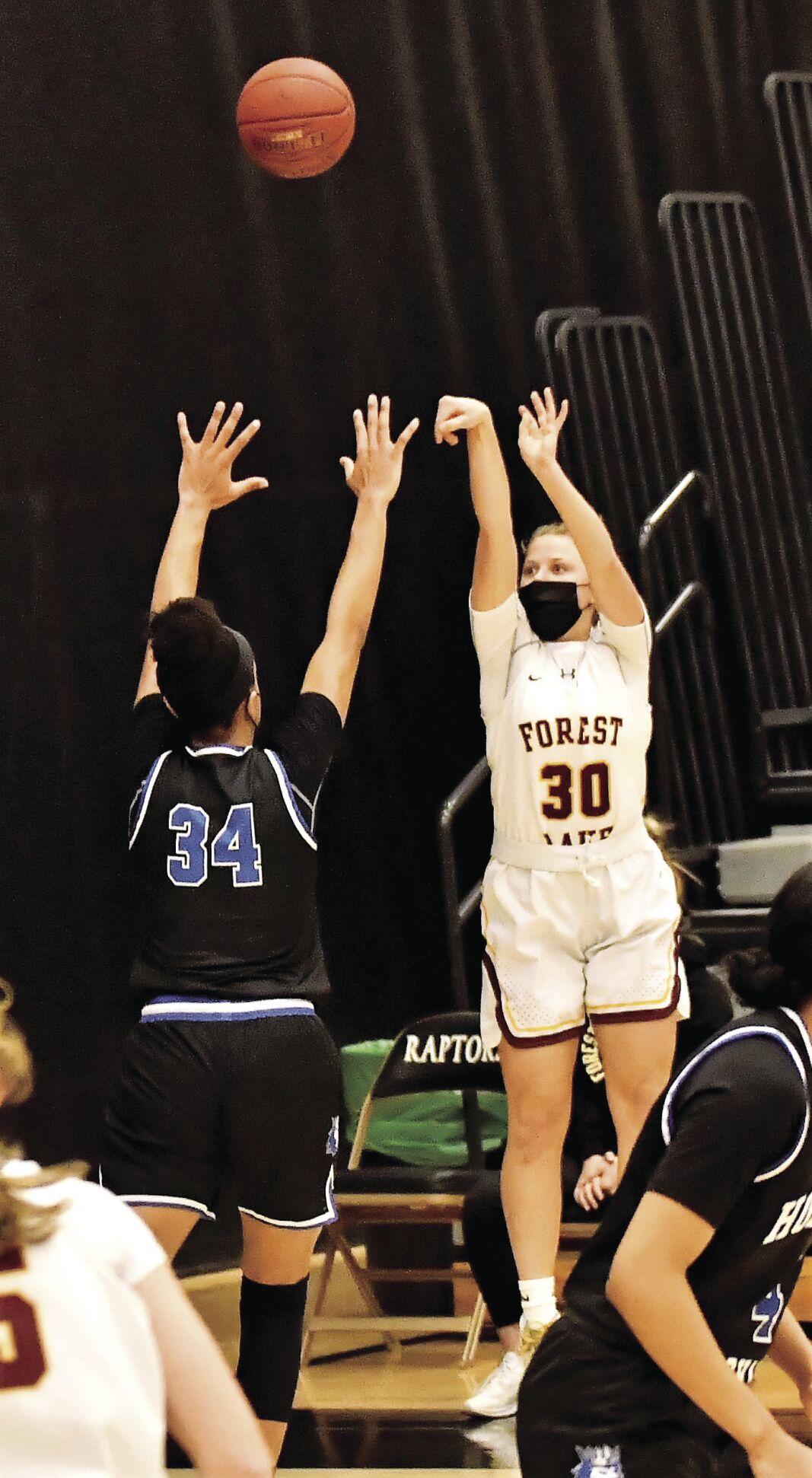 Forest Lake senior Lydia Bostrom takes an open jumper from the corner against Hopkins in the Rangers’ loss to the Royals in the quarterfinals of the state tournament. 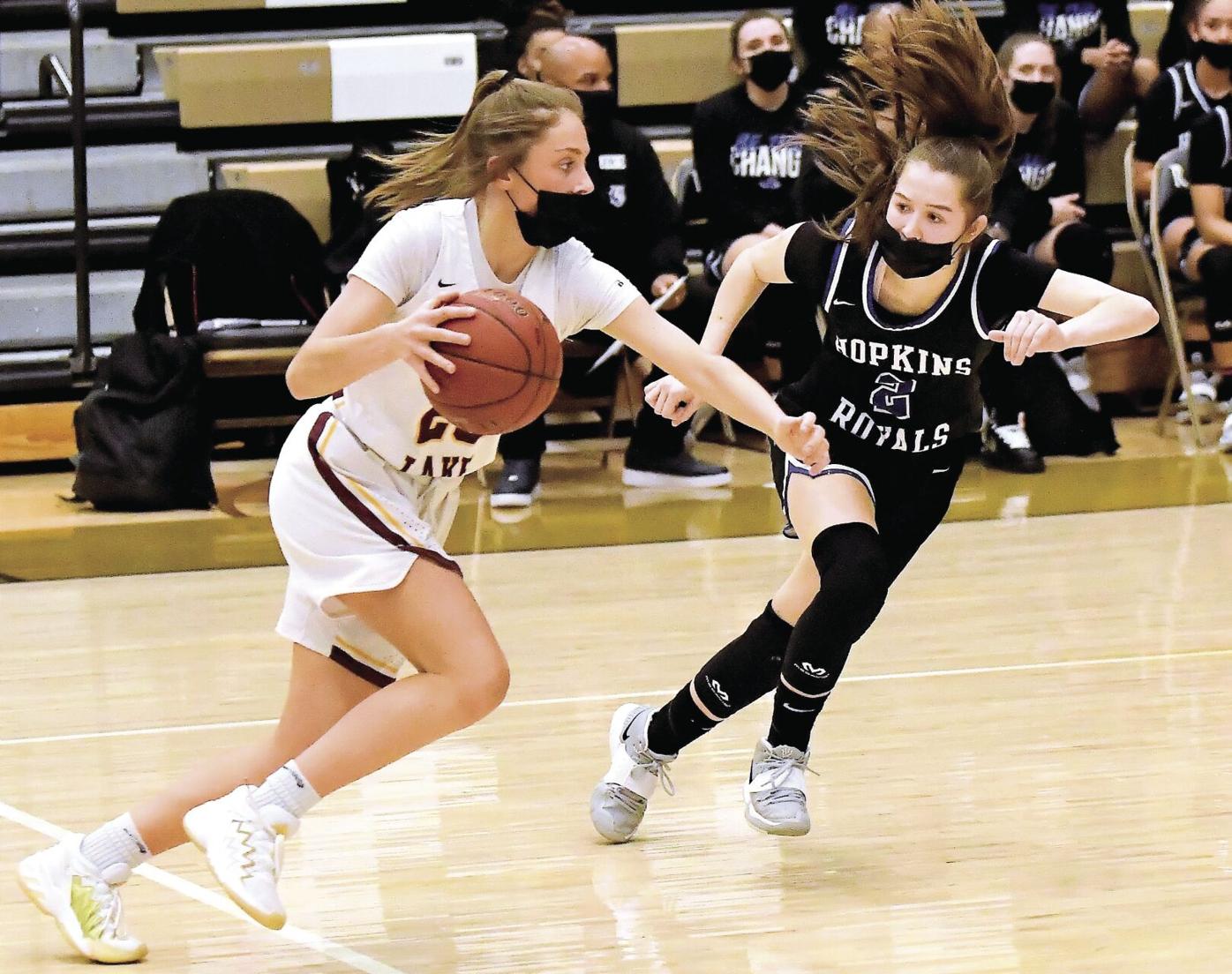 Junior Greta Krieger dribbles into an opening in the Hopkins defense. Krieger will be one of the few returnees — and the only returning starter — for the Rangers next season.

Senior captain Lulu Pekron dribbles the ball upcourt after snaring a rebound against Hopkins in the state tournament contest.

Forest Lake senior Lydia Bostrom takes an open jumper from the corner against Hopkins in the Rangers’ loss to the Royals in the quarterfinals of the state tournament.

Junior Greta Krieger dribbles into an opening in the Hopkins defense. Krieger will be one of the few returnees — and the only returning starter — for the Rangers next season.

It is a cruel certainty in sports that, for the overwhelming majority of teams, the season ends in sorrow.

This season only four girls high school basketball teams will close the season with a victory – and for some, the agony of that final defeat can cloud the memories of an entire season.

But all wise teams remember another axiom: A season is not defined by a single game.

That is especially true for the Forest Lake girls basketball team that closed its season with a 76-44 loss to Hopkins in a Class 4A state quarterfinal game played at East Ridge on Tuesday, March 30. In that contest the Royals, the defending state champs and the top-ranked team in the class, extend their current winning streak to a state-record 78 straight games.

That is why the Rangers would be best-served to remember the entire width and breadth of this past season, which featured a 17-4 overall record that included a 15-3 mark in Suburban East Conference play. Forest Lake opened the season with six straight victories, and it won its final seven before collecting two more wins in section play to claim the program’s third Section 7 title in four seasons.

“Making the state tournament three of the last four years? When you’re able to zoom out a little bit from this one game, I think our team will be a little more aware of the tremendous season it had,” coach Jennifer Wagner said. “Considering the circumstances – COVID-19 protocols, wearing masks, no buses for travel, all kinds of stuff – they were able to persevere and earn a shot to battle the No. 1 team in the state.

“It doesn’t make the loss sting any less, and it was tough Tuesday night to see the bigger picture. After a few days, I think our team will appreciate everything that happened this season.”

In the state tournament contest, Hopkins roared to an early 12-2 lead and just kept up the pressure. When Royals guard Amaya Battle capped the first half with a buzzer-beating basket, the Rangers were staring at a 48-22 deficit.

“We knew coming into the game it would be a tough matchup for us based on Hopkins’ size and length, and their athleticism,” Wagner said. “I felt we had a good game plan, and we prepared the kids well. And we were fired up and ready to play.

“But against a team like Hopkins, you don’t have to play a perfect game, but you have to be mostly flawless. They speed you up, and their length took away passing lanes.”

When Wagner looked back at the just-completed season, her first thought was of the contributions of the nine seniors on her team’s roster.

“Playing in the section championship game four years in a row is an incredible accomplishment, and our seniors played a big role in developing the culture that created that expectation,” she said. “They’re not just incredible student-athletes, they’re leaders in our school building and in other sports. They are nine incredible young women.”

Those contributions began with Anderson, who reached the 1,000-point plateau late in the season.

“She’s an impressive player when you consider how strong she is and how fundamentally solid she is,” Wagner said of Anderson. “There are so many times, when you watch her, you wonder how she got a rebound or how she got up a shot.”

Anderson was one of the team’s captains along with fellow senior Olivia “Lulu” Pekron.

“We asked her to do a lot this year, and Lulu often was undersized when we asked her to guard other post players,” Wagner said. “But she was able to contain a lot of those players. She gave us energy and brought a spark every time she was on the floor. It was fun to watch her get up and down the court.”

Wagner said Katie Johnson may have been the unsung hero of the team.

“She doesn’t get a ton of recognition, and she may not win a ton of awards, but she was consistently facilitating our offense while defending our opponent’s best guards,” Wagner said of Johnson. “She got us in sync, and that’s something that’s hard to chart in statistics.”

Lydia Bostrom and Hailey Pitzl split time as starters for the Rangers, and Wagner said both were huge contributors to the team’s success.

“Lydia is a 3-point specialist who was able to turn into a lock-down defender,” Wagner said. “Pitzl, with her length, was able to get to the rim and get open shots. We asked a lot of them, especially in asking them to share a starting role, and they were both willing and able to do that.”

Wagner said she also admired the way senior Josey Kahl, whose family moved to Forest Lake before her junior year, seamlessly merged into the team’s culture.

“Josey made it look easy, and I’m sure there were times that it wasn’t easy,” Wagner said. “She gave us an edge when she came into the game because she is physical.”

“Paige tore her ACL, but she came to many of the practices and all of the games and helped us out,” Wagner said. “She would help our JV players to be in the right spots in practice, and that speaks to her character, the type of kid she is.

“Lauren had limited minutes on the varsity but got significant minutes on the JV. And she worked hard at practice every day. And Abby was a player as a ninth grader, and she wanted to stay with the program as a manager. She’s always willing to help, whether it’s running the book or taking film. She’s willing to do anything we ask, and she does it at the highest standard.”