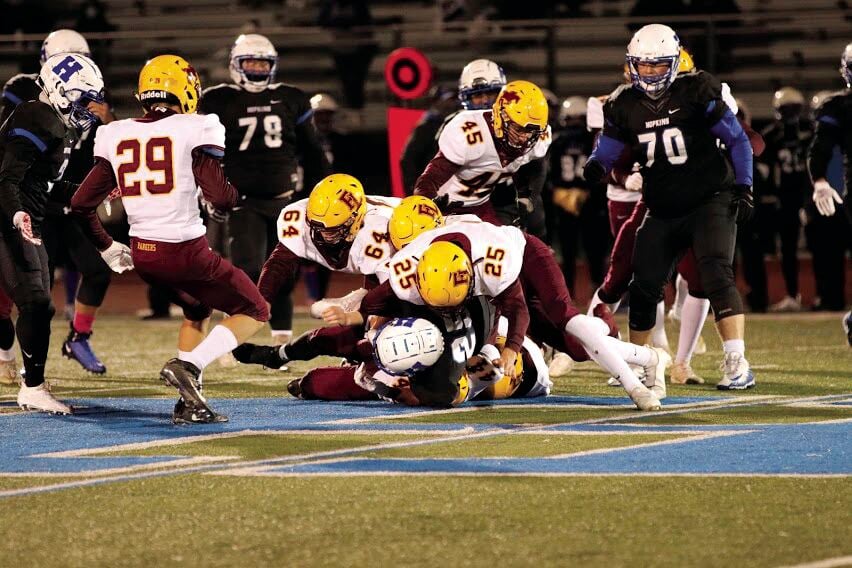 A posse of Rangers, including sophomore defensive tackle Sam Mills (No. 64) and junior defensive back Payton Christenson (No. 25), swarm a Hopkins ball carrier to the ground during the second half of Forest Lake’s 32-18 loss to the Royals on Friday, Oct. 23 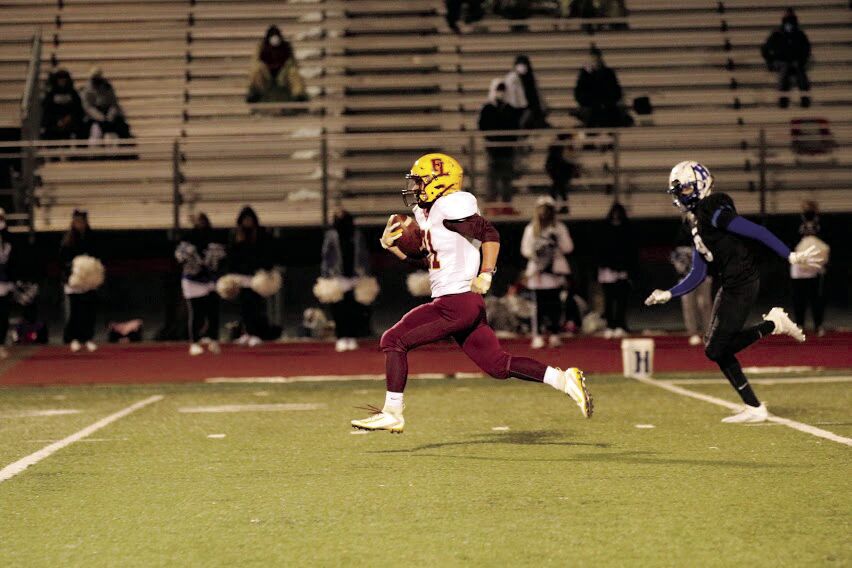 Junior Leo Kressin pulls away from a Hopkins defender to score on a 55-yard pass from Caleb Kasa during the second quarter of Forest Lake’s 32-18 loss to the Royals on Friday, Oct. 23. 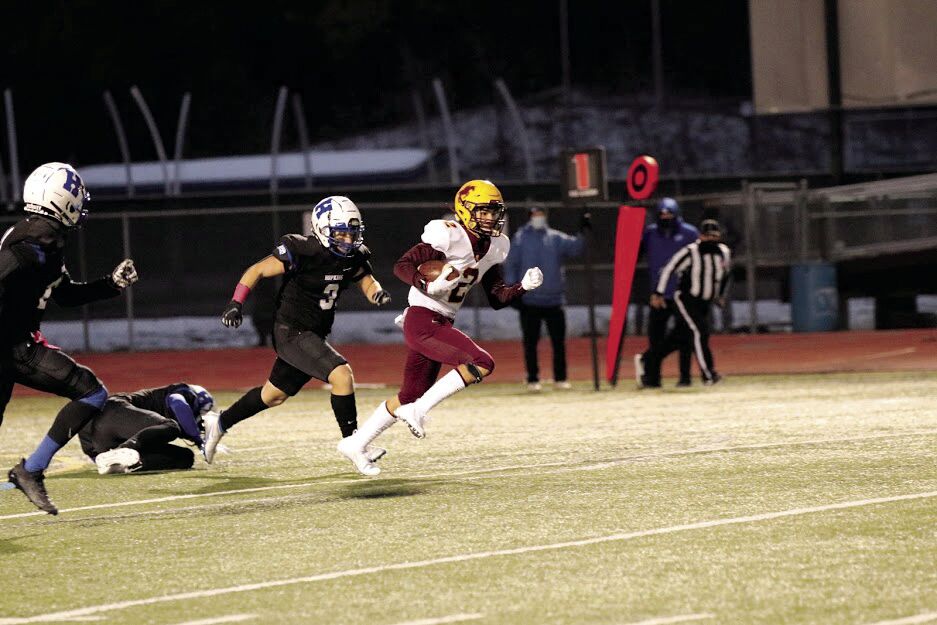 A posse of Rangers, including sophomore defensive tackle Sam Mills (No. 64) and junior defensive back Payton Christenson (No. 25), swarm a Hopkins ball carrier to the ground during the second half of Forest Lake’s 32-18 loss to the Royals on Friday, Oct. 23

Junior Leo Kressin pulls away from a Hopkins defender to score on a 55-yard pass from Caleb Kasa during the second quarter of Forest Lake’s 32-18 loss to the Royals on Friday, Oct. 23.

The education process for a young Forest Lake football team took another step forward at Hopkins on Friday, Oct. 23.

The lesson: early mistakes can be difficult to overcome.

Early turnovers allowed the Royals to build an early 13-0 lead, and while the Rangers were able to cut into that deficit, they never were able to completely close the gap and suffered a 32-18 loss.

“When you throw an interception on the second play of the game, you’re digging yourself a hole,” Forest Lake coach Sam Ferraro said. “And we did keep fighting all game long, but we were never able to come back all the way.”

The Rangers dug in their heels when that interception gave Hopkins the ball on Forest Lake’s 45 and forced the Royals to run 10 plays to reach the end zone. But Hopkins was able to convert three times on third down, and that proved to be a recurring theme all game long.

Late in the first quarter Hopkins recovered a Forest Lake fumble at the Rangers’ 33, and five plays later the Royals scored again to lead 13-0.

Hopkins scored a touchdown early in the second quarter to make the score 20-0, but Forest Lake fought back. Senior quarterback Caleb Kasa threw a 55-yard touchdown pass to junior Leo Kressin midway through the period, then sophomore Westin Hoyt intercepted a pass deep in Hopkins territory to set up a 16-yard scoring strike from Kasa to senior Seth DuPaul with just six seconds before halftime.

“I’ve been impressed by the drive of our kids,” Ferraro said. “Over the past two or three years, we’ve been able to convince our kids that the game is never over. They keep fighting until the end.”

The two teams traded touchdowns in the third quarter, with Kasa scoring on a 7-yard run with 3:55 left in the period to make the score 25-18. But Hopkins closed the scoring with a long TD drive late in the fourth quarter.

“We had a lot of highlights in this game,” Ferraro said. “There were some things open, and we took advantage of them. We had some nice runs here and there, and we had a big pass play.”

“Charlie Peterson had an amazing second half,” Ferraro said. “He played really well. And Tyler Raway played well, although his numbers may not show that.”

Ferraro said he expects continued improvement from his young Rangers, who will take a 1-2 record into their home contest against Park Center on Friday, Oct. 30, a game that will kick off at 7 p.m.

“We told our guys that nobody is considered a newcomer anymore,” he said. “You’ve got three games under your belts, so it’s time to step up. We need to stop making little mistakes.

“When you’re coaching young kids, sometimes you assume they know certain things. Then you realize, when you talk to them in meetings, that they may not – and that’s because they’re sophomores.”

“When you have a lot of 10th graders, your body has a long way to go to mature,” Ferraro said. “Some of these kids have put 20 or 30 pounds on by working all summer in the weight room and eating better. And some of them could put 20 or 30 more healthy pounds on.

“But they’re learning the game, and they’re getting better.”