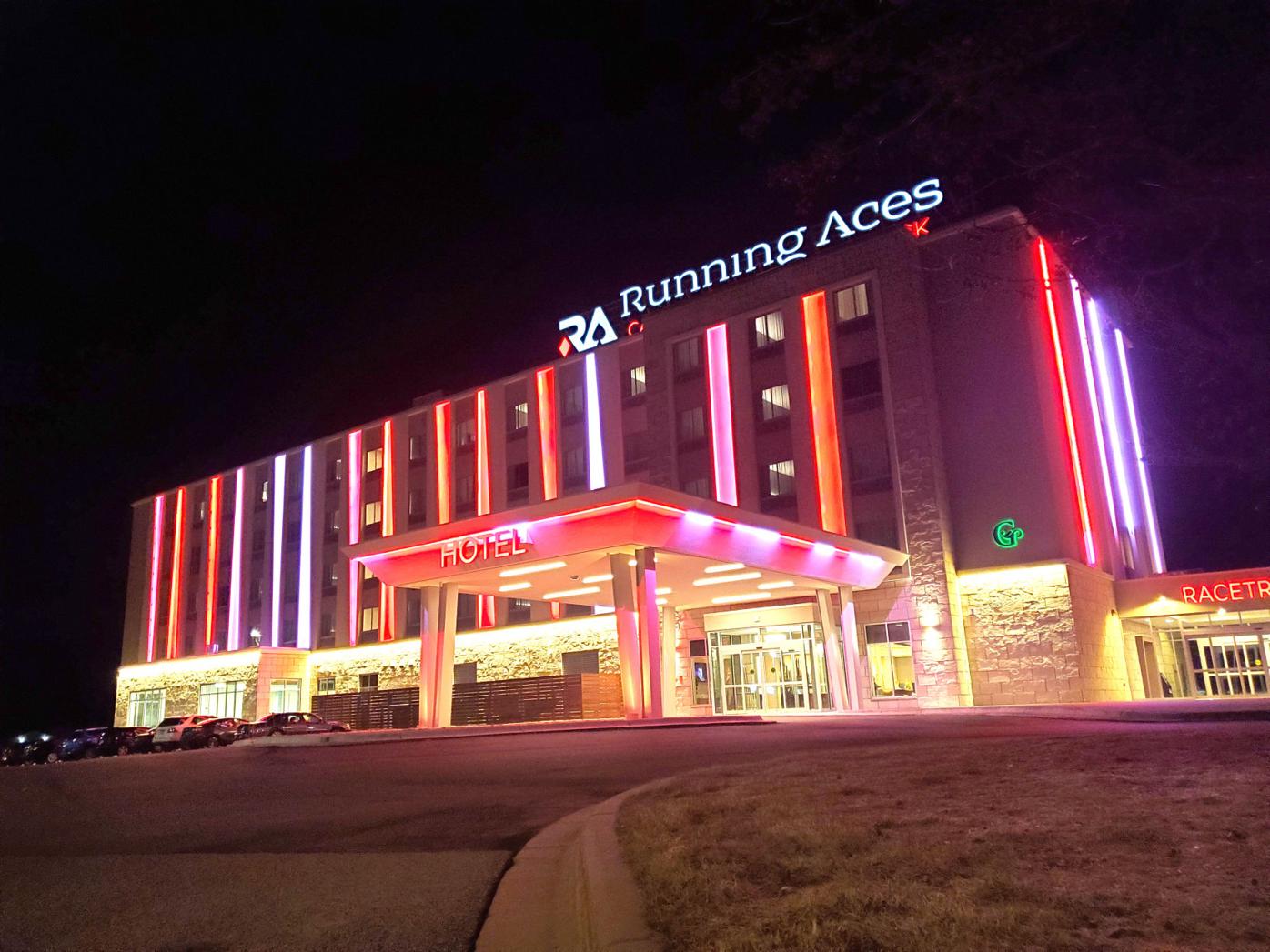 Running Aces Hotel opened to the public on March 11 during a grand opening ceremony. Construction began on the hotel in the fall of 2018. 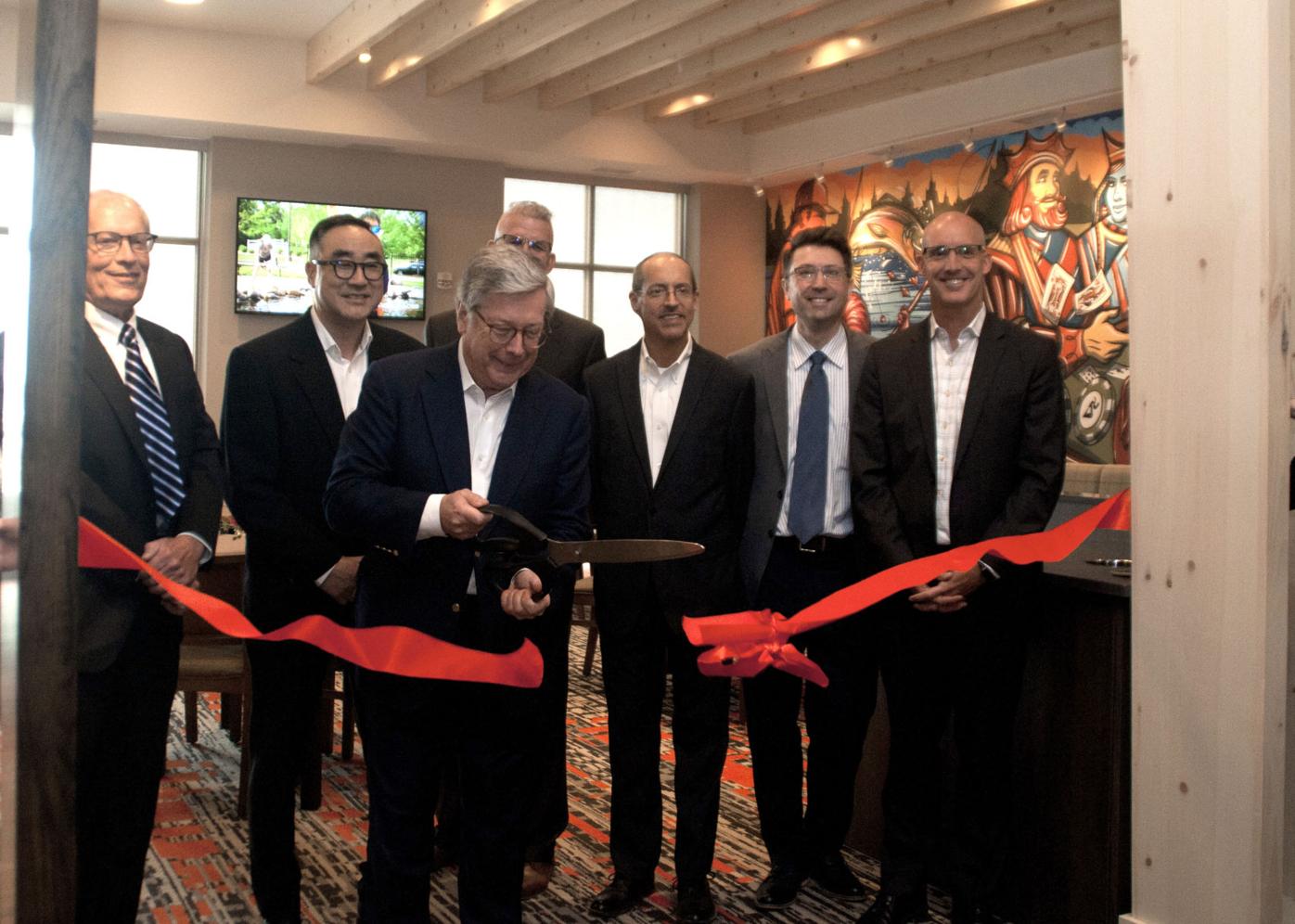 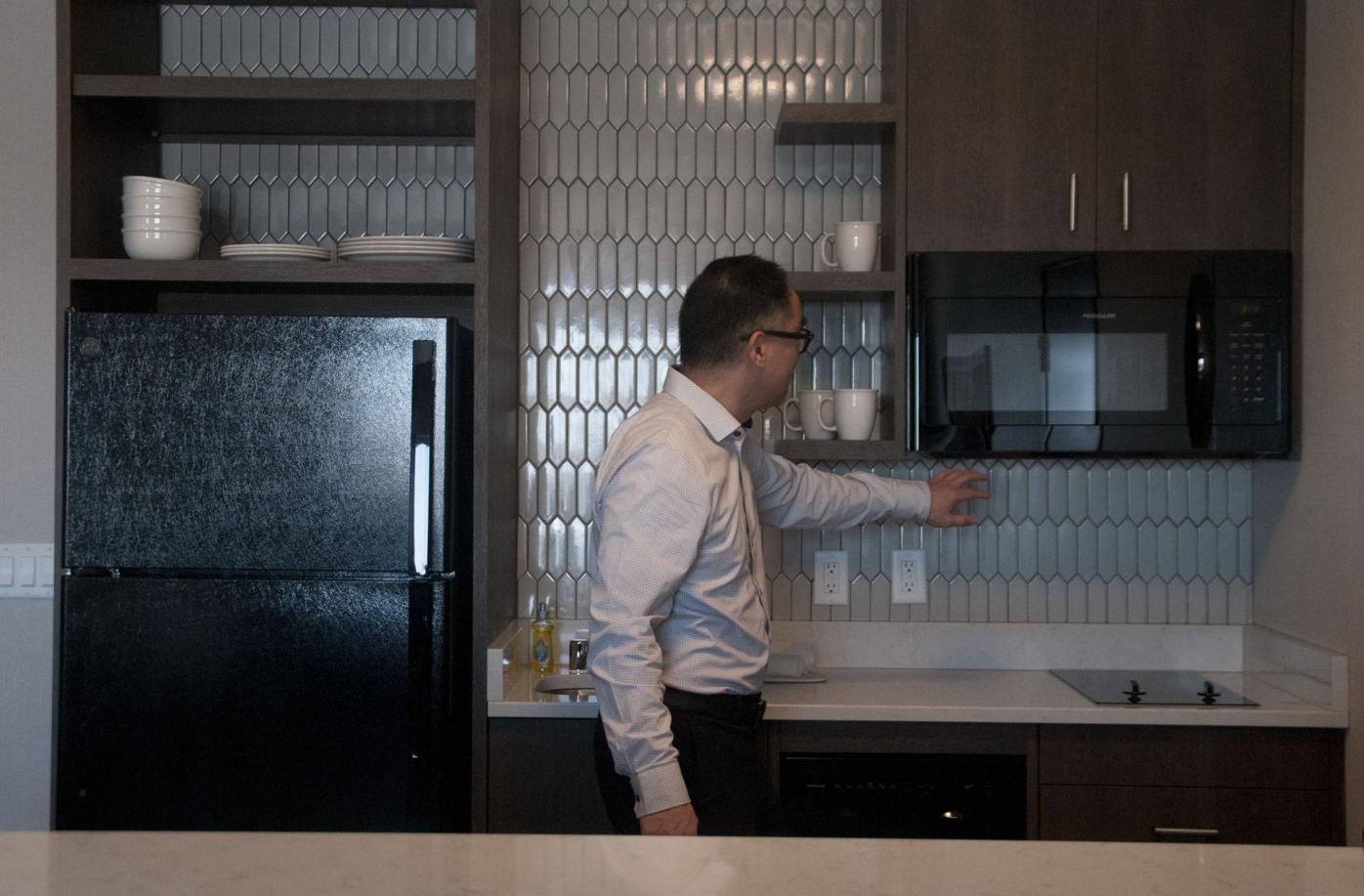 Running Aces Hotel President and CEO Taro Ito shows off the kitchenette area of one of the VIP suites.

Running Aces Hotel opened to the public on March 11 during a grand opening ceremony. Construction began on the hotel in the fall of 2018.

Running Aces Hotel President and CEO Taro Ito shows off the kitchenette area of one of the VIP suites.

It took nearly four and a half years to get the Running Aces Hotel from its inception to its grand opening, but that finally happened on March 11. It’s a project that CEO and President of Running Aces, and now Running Aces Hotel,  Taro Ito has sought to make happen. (The hotel had five days of service, and then had to shut down due to the COVID-19 pandemic.)

The five-story building features 116 rooms; four of those are the VIP suites, and 16 are what the hotel calls extended suites. In addition, the hotel includes divide-able meeting space, which can hold up to 150 people. It also has a fitness center, pool and spa, room service, and extended breakfast center that doubles as a bar and lounge in the evening with a walkout patio area. Since the hotel is adjacent to the Running Aces racetrack, half of the hotel’s rooms, as well as the lounge area and all of the meeting rooms, have views of the racetrack, a perk Ito said he anticipates to bring in large groups for entertainment.

Ito, who began his position of CEO and president of Running Aces in 2014, began thinking of ways to expand the business. One year later, he was approached with the idea of building a hotel. Ito took that idea and ran with it.

“First we had to convince the ownership that this is a viable project,” Ito said. Early on, the parent company that owns Running Aces Casino and Racetrack did a feasibility study, and found the idea had legs.

“It showed that this north metro area could use a hotel of this size. There was a lot of need for inventory,” Ito said.

Over the next nearly three years, the company worked through the development phase, determining things like hotel design and how to structure the business (while the hotel is owned by the same parent company as the casino and racetrack, the hotel is its own business with separate ownership and management).

Running Aces also partnered with the Cunningham Group to design the theme, concept, and architecture of the hotel.

“We worked very hard to create this feeling ... of a north cabin, more Scandinavian modern,” Ito said, referencing the Norwegian word Hygge, meaning a state of coziness. “It’s that feeling of just being comfortable, and that’s what we were trying to create.”

Ito said that as they worked on the design, he wanted a feel of both luxury and comfort, so the architects created tall ceilings and wide corridors and wood accents for a more airy and comfortable feel.

Another highlight for Ito is the artwork, he said. From the art in each room to the mural painted at the breakfast bar and lounge, all the artwork used in the hotel is by Minnesota artists. The highlight for Ito: the glass-covered sand drawing coffee table in the front lounge. A mechanism inside the table pulls a marble along the sand to create various designs, which has been programmed to include logos and graphics specifically related to Running Aces.

“I think we did a tremendous job. It’s one of a kind. … Each scene is put together like a jewel box. It’s like a set, and each view you get from each location is spectacular,” Ito added.

A process not without challenges

Getting the hotel built didn’t come without a handful of challenges. Even though the hotel sits just 15 feet away from the casino, the soil was found to be completely different, and thus couldn’t hold the weight of the hotel design, so architects determined that geopiers had to be inserted into the ground, adding to the cost and timeline of the hotel.

In 2017, During the design phase, the city of Columbus, where the hotel is located, considered and then passed a zoning amendment to allow an asphalt plant to be built nearby. While Ito said that the hotel never stopped its planning phase, concerns about traffic patterns delayed the planning. Those concerns were brought up and later addressed by the city, and thus the hotel moved forward.

On Nov. 15, 2018, the hotel held a groundbreaking, as construction had already begun to get ahead of the winter months, but more delays were to come, this time due to weather. The winter of early 2019 proved to be one of the most grueling, as extreme cold temperatures had to halt the construction for some time in January, and the construction team dealt with heavy snowfall totals, with February 2019 being the snowiest month on record. The hotel’s original opening date had been scheduled sometime for December of 2019, and due to the construction delays, saw its opening in March of this year.

“Those were real challenges,” Ito said, but added that he’s proud of the way it turned out.

“It’s extremely satisfying and rewarding in the sense that you don’t get opportunities like this very often to see something from start beginning to end,” Ito said.

Ito sees the hotel as just one new development in a growing area, noting the recent addition of the asphalt plant, Bare Homes, and the possibilities that could come with the four quadrants of undeveloped land at the intersection of Highway 97 and Interstate 35.

“We’re really on the beginning of a renaissance and the time for Columbus,” Ito added. “This thing will be here long after I’m gone and move to another town. We built something here that really is special for the area.”

Ito said that they’re already finding that local businesses have wanted to use the hotel as a home base for corporate meetings and putting up traveling business people. But if there’s one thing Ito wants the public to know, while the majority of hotel guests are likely to be travelers, he said that the hotel was really built for locals to come and enjoy the space, too.

“This is meant for them. We built this for them,” Ito said.

Hopeful for a positive future

The grand opening of the hotel was just mere days before Gov. Tim Walz announced the required closures of schools, restaurants dine-in options, and other businesses of amusement. Running Aces Hotel closed its doors just five days after it opened them to the public. Since then, there has been a great economic toll across the country.

Ito, however, remains optimistic despite the bad timing.

“We opened a few months before the 2008 collapse, which was the biggest recession in our time,” Ito said. “We open this hotel, and five days later, it’s the biggest economic crisis. People have been joking with me saying Running Aces is unlucky.”

However, Ito looks at the history of Running Aces and remains confident in the ability to make it through.

“Naturally we’re disappointed, but we’re not discouraged,” Ito said. “In the five days we were open, we got a lot of positive feedback.”

He added that while people aren’t traveling, he thinks that once the hotel is allowed to operate again, that locals will look to the hotel as a fun getaway. Since the hotel faces the racetrack, Taro said that families can get a hotel room or meeting space that comes with a view of the track for a safe entertainment experience.

Ito even has plans for further expansion when the timing is right.

“This is just the beginning,” he said.