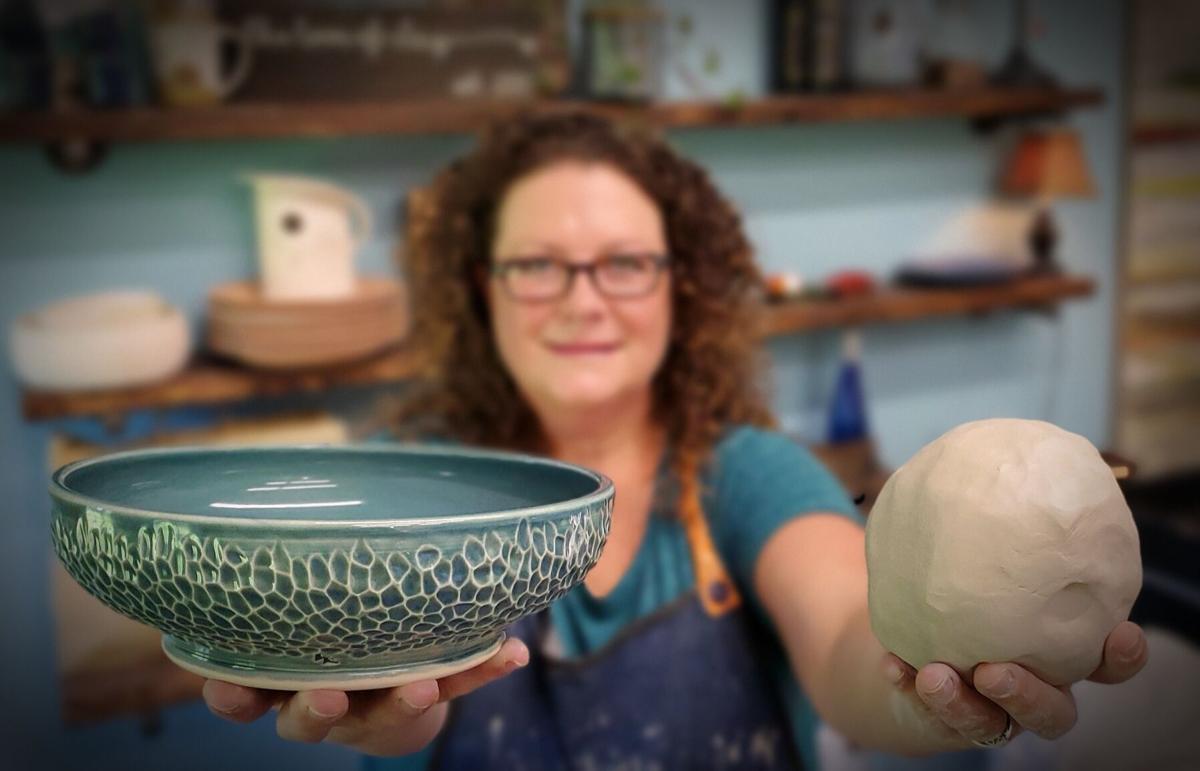 LeeAnn Murdock, owner of The Love of Clay in Wyoming, has made her passion for molding dishware out of clay into a business. Murdock also recently began hosting classes, or what she calls “clay labs,” that allow people to create their own pottery with her assistance and without having to learn how to use a wheel. Photo submitted 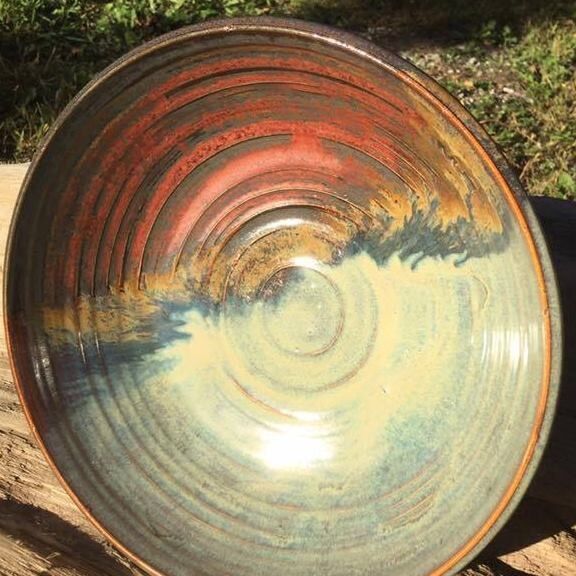 Experimenting with different textures is one of Murdock’s favorite parts of pottery.

LeeAnn Murdock, owner of The Love of Clay in Wyoming, has made her passion for molding dishware out of clay into a business. Murdock also recently began hosting classes, or what she calls “clay labs,” that allow people to create their own pottery with her assistance and without having to learn how to use a wheel. Photo submitted

Experimenting with different textures is one of Murdock’s favorite parts of pottery.

“I like that the clay is raw and natural,” said Leeann Murdock. “Sometimes it’ll get on my face, and if it gets in my mouth, I don’t worry about it.”

Like many children do, Murdock spent her childhood playing with mud. Now as an adult, she has made playing with mud a full-time job as the owner of The Love of Clay pottery.

“What’s driven me to create things and have pottery that I can sell and share, I think it’s mostly my desire to build things, and because clay is a medium with which you can do that,” she said.

Inspired by her grandmother’s artistic spirit as a child, she and her siblings would create with the things they found in nature.

“We would go and dig up where we found the deposits of clay, and we’d make pots with them and dry them in the sun and use them. That’s when it all really started for me; [it’s] the ability to use something that is so organic and to make something functional out of it,” Murdock said.

Murdock said it’s all about building something from scratch with her hands.

“I’m very mechanically-brained, so I’ve always liked to build things. With clay, that’s what you’re doing all the time is creating a structure or a pot or a mug with a handle,” she said.

Though making pottery took a backseat during her high school years, she rediscovered her love of pottery in college and especially dug into it while taking independent study classes at the Northern Clay Center in Minneapolis in the 2000s. Later, she moved back to Duluth and continued by renting a studio space there. Being with other artists in that studio helped reignite her passion.

“You learn so many things from watching other people,” Murdock said.

It’s taken years of learning experiences to develop and hone her craft, but she said that she’s had to learn to let go of perfectionist tendencies.

“I used to have a teacher in Duluth and she’d come over, ... she’d poke her finger in it and she’d be like, ‘Quit it,’ and I’d be like, ‘Oooh, my perfectly square dish is ruined,’” she recalled.

While it’s still a struggle to let that go sometimes, she said she’s embraced the imperfections that makes each creation unique.

“I don’t want to make things that look like they came from Target. That’s not my goal. But I don’t want someone to see a flaw either.”

In 2009, Murdock and her husband moved to Wyoming, and since she no longer had access to a shared studio, she bought a wheel and kiln to create her own pottery. Then in 2017, the couple built a pole barn on their property to use as her own personal studio. It’s a space, she says, that’s become her place to let her brain do the work it was made to do.

“The feeling when you’re in the studio, ... just that time being at the wheel or building pieces is satisfying a part of me. I have a real need to create, and if I haven’t built something or made something in a while, I get to point where I was, like, I get to take a day and make something, because I’m craving that structure, that building piece, that my brain wants. My brain wants to work and figure out angles and sizes and shapes,” Murdock said.

In addition to her own pottery, Murdock is now helping others create their own.

“I was inspired by the paint-and-sip classes where people get together and paint the same picture and have wine and do the girls night out thing,” Murdock said. “I wondered why you couldn’t do that with pottery.”

She began offering classes, or what she calls clay labs, that allow people to handcraft their own pottery. It’s given Murdock a new perspective on pottery, and she says she hears frequently how guests are surprised when their creations turn out better than they thought they would.

“It sort of demystifies the whole pottery craft,” she said. “The glazes and things that I offer do a lot of color changing over texture, so I always talk about it like the magic of the glaze. You put in all the texture, and the glaze does the magic.”

In the mornings, like many others, Murdock relishes her morning cup of coffee in her favorite mug. It’s that personal and intimate experience with a tactile object that is the reason why Murdock focuses on making functional pottery items like dishes and mugs.

“I don’t make a lot of art pieces, because I want them in the mix of your kitchen and what’s happening in there and your meals with your family,” she said.

It takes a nuanced touch to make pottery, said Murdock; to understand how the texture of a dish feels to the hands, or the way the curve of a mug’s lip meets the mouth. It’s a touch she’s honed over the years, working her hands to mold the perfect mug.

“Your mouth is very sensitive, so you have to make sure that lip is smoother and soft,” Murdock said. “It’s an intimate thing to be putting the cup to your mouth. The curve and the shape of that lip can be very important.”

But it’s not just mugs she likes making, it’s other dishes, like platters and bowls — particularly pasta bowls.

“It’s roomy enough to keep everything inside but big enough to slop it around. It sounds silly, but it’s just those sort of pleasures of eating out of my pieces [that are] important to me,” Murdock said.

The tactile experience is so important to Murdock, she said, that she will put price tags on the bottom of her pieces for sale because she wants the potential buyer to pick it up and feel it.

“There’s a bit of risk in that because there’s a risk for breakage, but you can’t really connect with a piece until you have it in your hand,” she said. “I love the weight of the piece. ... I want to see how people react to things, because my goal is to make something they really connect with and really love and end up using.”

Outside of her studio, she works to build other things, too, most often woodworking projects.

“When COVID first started, we were lost for a couple weeks, and then I said to my husband, ‘I gotta build something, and I want to build something big.’ I gathered lumber we had around and I built a 7-foot potting bench,” she said.

Still, she says, there’s something about pottery that gives her a unique satisfaction, a project that can be from start to finish about completely molding something from the earth up, and unlike other art mediums, it’s the adaptability of clay that makes each process of creation unique, said Murdock.

“With clay, I like it so much, because even though it can be challenging, it’s forgivable. ... If a crack forms somewhere or if something dries the way you didn’t want it to, you can go back and correct that stuff. There are certain parts in all the steps that you can always change your plan for something.

And to mold something into a piece of kitchenware is where she finds her joy.

“I want people to open the cupboard and reach for the bowl that I made because it’s their favorite,” she said.

-Noelle Olson contributed to this article.