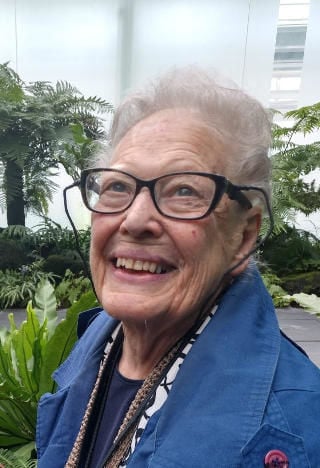 Gwendolyne “Gwen” Amelia Hansen (Hagg), 83 of Forest Lake, Minnesota, passed away April 19, 2020, of complications due to heart failure. She is preceded in death by her husband Mark and survived by her children Jeffrey Hansen of Fairport, NY, Joel (Susan) Hansen of Lindstrom, MN, and Jessica (David) Carr of Maple Grove, MN; grandchildren Kellisa, Josh and Britta (Jeffrey) and Ethan and Jack (Joel); sisters-in-law Janet Gilbertson of Austin, MN and Marie Hagg of Frankfurt, KY; many nieces and nephews, their spouses, children, grandchildren and great-grandchildren, all of whom made life fantastic, Gwen loved each and everyone of them. Born in Dell Rapids, South Dakota to Hilding and Esther Hagg, she was the last surviving sibling following Violet, Joyce, JoAnne, Dallas, Doyle and Mercedes. Gwen survived Rheumatic Fever in her early years and would have a heart condition throughout her life because of it, claiming her three years in bed led to her love of reading. During many doctor visits for cardiac issues, doctors would have their student’s listen in to Gwen’s perfect heart murmur. The doctors would ask if it was alright and Gwen would say, ‘best way to educate with a real live example.’ Valedictorian of her graduating high school class, she would eventually complete college at the University of South Dakota State in Vermilion where she met Mark Hansen. It could be noted that they both attended a national youth gathering in California prior to college over the same summer, although they say they did not meet. Her degree in General Education allowed her to teach K-12, any subject. Married on August 15, 1959, she followed Mark on his completion of his ROTC requirements, helping start GED programs at the army bases they would be stationed at. Upon honorable discharge, Mark accepted a position in Forest Lake, Minnesota as high school art teacher. Without the guidance and a phone call from his sister, Gwendolyn Johnson (Bob) of Forest Lake, post Army service would not have brought Mark and Gwen to Forest Lake. Astonishingly, Gwen Johnson passed away not hours before Gwen Hansen in what has shocked both Johnson’s and Hansen’s alike. Gwen began teaching in the Forest Lake Area Schools in 1965, teaching whatever needed to be taught, History, Math, Biology among the first full time classrooms. Eventually becoming the head of the Science Department in the High School and teaching mostly Chemistry Classes until retirement in 1997. Sharing her passion for life long learning and advocating for students who may need a non-traditional approach to teaching and learning, she began the local GED program in 1968 which she would continue participating and teaching with until after her retirement. In 1968, she and Mark continued their education in Arizona at ASU, both picking up Master Degrees in their fields. Instrumental in the fight for women’s rights in the work place, Gwen was part of the class action suit which would bring about the Pregnancy Discrimination Act of 1978 which would lead to the Minnesota Parental Leave Act of 1987. As grievance chair person for the local teacher’s union, Gwen was often responsible for confronting discrimination within the work place. She definitely knew what the word ‘Balderdash’ meant. Throughout all of her years teaching in the public sector, she and Mark taught Sunday School, Confirmation Classes and led many Bible studies, sharing her faith while helping others of all ages grow in their faith at Faith Lutheran Church in Forest Lake. Inductee to the Forest Lake Area Schools District Hall of Fame in 2011, Gwen will be remembered as mentor and visionary with the creation of Community Scholarship Foundation. Upon retirement, both Gwen and Mark worked diligently with the Evangelical Lutheran Church in America to help create educational opportunities in Tanzania. They were able to visit the education facility they helped create in 1998. The columbarium and Memorial Prayer Garden at Faith Lutheran Church, where she will be interned with her husband, was the last project they worked on together. Late January 2020, Gwen came down with the seasonal flu, she struggled to recuperate but her murmuring heart had difficulty recovering fully. Over the past three months, she progressively dealt with greater and greater vascular dementia. The family would like to thank the staff at Cherrywood in Forest Lake, where she has been living the last few years, The Meadows of Fairview in Wyoming which helped her transition last summer and this spring, Birchwood Long Term Care in Forest Lake and the members of Hospice. The care Gwen has received has been outstanding and loving, all the caregivers have our gratitude and praise. The family welcomes memorials to the Cherish All Children program which is an effort to end human trafficking, the last issue Gwen took up with intent to solve, as well as Community Scholarship Foundation Forest Lake Area Schools. A Celebration of Life will be held at Faith Lutheran Church at a future time: ‘When Science says it’s safe to gather again.’ Gwendolyne A. Hansen.

I graduated from FLHS in 1985 and had the pleasure of being a student to both Gwen and Mark in my time there. What a wonderful and intelligent woman, she smiled often and was an excellent educator. A life well lived. My condolences to her family members, friends, and church family.

Such a great lady. Blessings sent from the Fladland family.