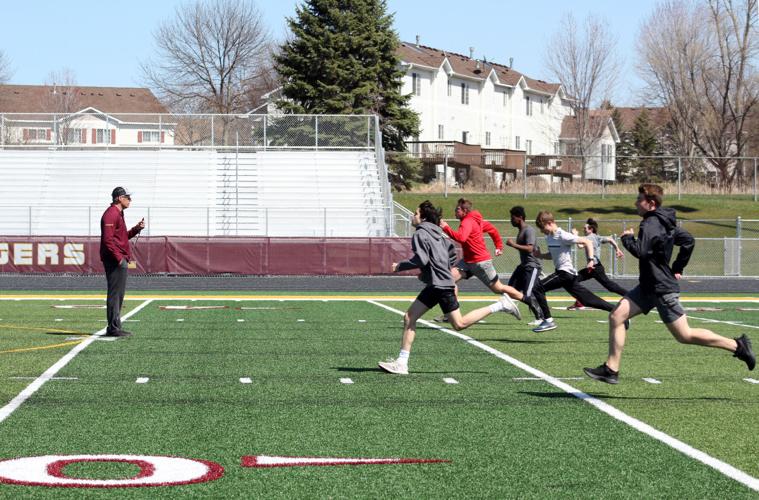 Assistant track coach Paul Kendrick guides drills for the varsity boys track team on the turf on Tuesday, May 3, exactly one week before Forest Lake will host its first meet in decades. 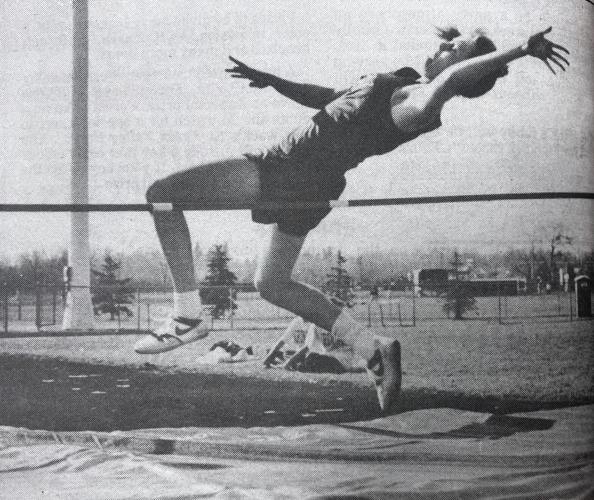 Nickie Demarais, then a junior, clears the pole during the girls track Forest Lake Invitational in 2002, the penultimate year any scaled-down meets were hosted at the high school’s track and field.

Assistant track coach Paul Kendrick guides drills for the varsity boys track team on the turf on Tuesday, May 3, exactly one week before Forest Lake will host its first meet in decades.

Nickie Demarais, then a junior, clears the pole during the girls track Forest Lake Invitational in 2002, the penultimate year any scaled-down meets were hosted at the high school’s track and field.

After track fell into disrepair, track meets tapered off. Now they’re back on track.

After decades of competing in away meets, Forest Lake is on its mark to host its first full-scale track and field meet since the mid-1990s when it hosts the True Team meet on Tuesday, May 10. The track and field at the old Ranger stadium had been in such a poor state that the team slowly stopped hosting meets on its own turf and elected to travel for meets instead. Now, after the completion of the new Ranger Stadium last fall, the Ranger track and field team will take its place at home to compete on their own turf.

The stadium cost roughly $7.4 million to complete, and rebuilding the track and field was a big reason the district looked to rebuild Ranger stadium.

Varsity assistant track coach Paul Kendrick has been with the program for more than 30 years, and has coached athletes prior to the ceasing of home meets, through all the away meets, and now back at home.

“I feel great for the kids because now they have a facility they can be proud of and they can start to build some traditions for our own home meets,” Kendrick said.

Kendrick’s history extends further than as a coach, as he ran for the Ranger track team in the 1970s when he was a student, before the track began to fall into disrepair.

“We just felt like the facility wasn’t up to speed. Nothing had been done for years, so we would always go to away games,” Kendrick said about the state of the track in the ‘90s. With his experience as a runner for the track and field team and as a coach, Kendrick felt the weight of the new facility when he saw it come together last summer and was able to walk on the track for the first time.

“It was surreal. It brought tears to my eyes,” Kendrick said.

Doug Peltier, the athletic director from 1983 to 1998, said toward the end of his tenure significant meets began tapering off because the facility was “woefully inadequate.” At that time, competitor schools had recently built new tracks with nine lanes and had much better facilities, while Forest Lake’s track was peeling off and in general disrepair, so he said it was easier to schedule away meets to go to those better facilities.

“We were phasing out using our track because we just didn’t feel our track was adequate enough for the level of athletes and competitions we were trying to provide for,” Peltier said. “It was easy for us not to have an event, but it was sad because you didn’t have that opportunity to draw the locals for kids running at home.”

According to him, Forest Lake hosted a few smaller meets on the track through the ‘90s, which was quickly becoming outdated to host a varsity full-scale meet. Later, smaller meets were held at the Century Junior High School track through 2005, but even that facility couldn’t be used for a varsity meet.

“That was a great practice facility for us, but it didn’t have water or electricity out there, so automatic timing and any of that; we wouldn’t have been able to host a varsity meet,” Kendrick said.

According to the Forest Lake Times archives, the last time a meet was held on the high school track was in 2003, when the girls track team held an invitational. Girls track had home meets at the middle school track through 2005.

In the years between having a functional track or field house to train, the coaching staff had to think outside of the box to train the athletes safely.

“We used to run in the hallways a lot before the field house was built. We would be doing block starts in certain areas. You just kind of make it work,” he said.

“We can do a lot of our drills and a lot of our biometrics and speed development stuff on that turf, and it has a lot better cushioning,” Kendrick said.

Not only has the new turf been beneficial, the key of familiarity with equipment for the track team is an important strategy that Kendrick says is valuable.

“We always try to make sure we visit a facility or have a lesser meet at that facility where we’re going to have our championship meet, so the kids have a familiarity with that facility,” he said.

In this way, the Ranger home meets can offer a level of comfortability to the athletes that none of them have experienced throughout their time in high school.

“The kids are going to feel good about being able to compete for a home meet,” Kendrick said.

But just because the Rangers haven’t had a home stadium track and field meet doesn’t mean it hindered the students from unlocking any athletic prowess.

“A facility doesn’t make the athletes. … We’ve had many state champs over the years; we’ve had many all-state kids, all-state relays. We’ve had a very competitive program regardless of being able to host home meets,” Kendrick said.

Forest Lake Area Schools athletic director Mike Hennen concurred that the athletes have done well without a home track to compete on, but said they deserved one nonetheless.

“They’ve always been pretty towards the top of our section and done really well at state and individual stuff. So those athletes deserve something to compete at in their hometown,” Hennen said.

With the new lease on the track team’s life, there are strong hopes for the program as this year’s team is off to a solid start.

“This is some of the most talent we’ve probably had for, you know, the last decade or so,” Kendrick said.

Hennen hopes to see a state champion result from this year’s debut track, since he views the facility as a motivator in itself.

“People say, ‘look good, play good, feel good’ sort of thing. And I think [that there’s] a little more excitement when you look out there, than what we had in that old six-lane track we didn’t even run on,” Hennen said.

Not only is the new track a motivator for the current athletes, Kendrick hopes the new facility will offer new opportunities to students who aren’t already involved in an extracurricular activity.

“I’m hoping that it will be a shot in the arm for getting more kids to want to participate in it and just get involved in athletics,” Kendrick said.

Forest Lake Area School District Superintendent Steve Massey said the facility is a new source of pride for the school, and for the city.

“It’s a state-of-the-art facility that has been long overdue in this community. To go decades without a home track meet I think is a real tragedy. We’ve been able to build such an asset for the community with this track and athletic field,” he said.

The community could see a byproduct of hosting meets as more people visit Forest Lake to root for their student athletes, stopping at gas stations and restaurants, likely bringing economic gains to the community.

“All of those different businesses benefit when we bring people to the community. So of course it benefits our own families, our own kids and our community as a whole,” Massey said.