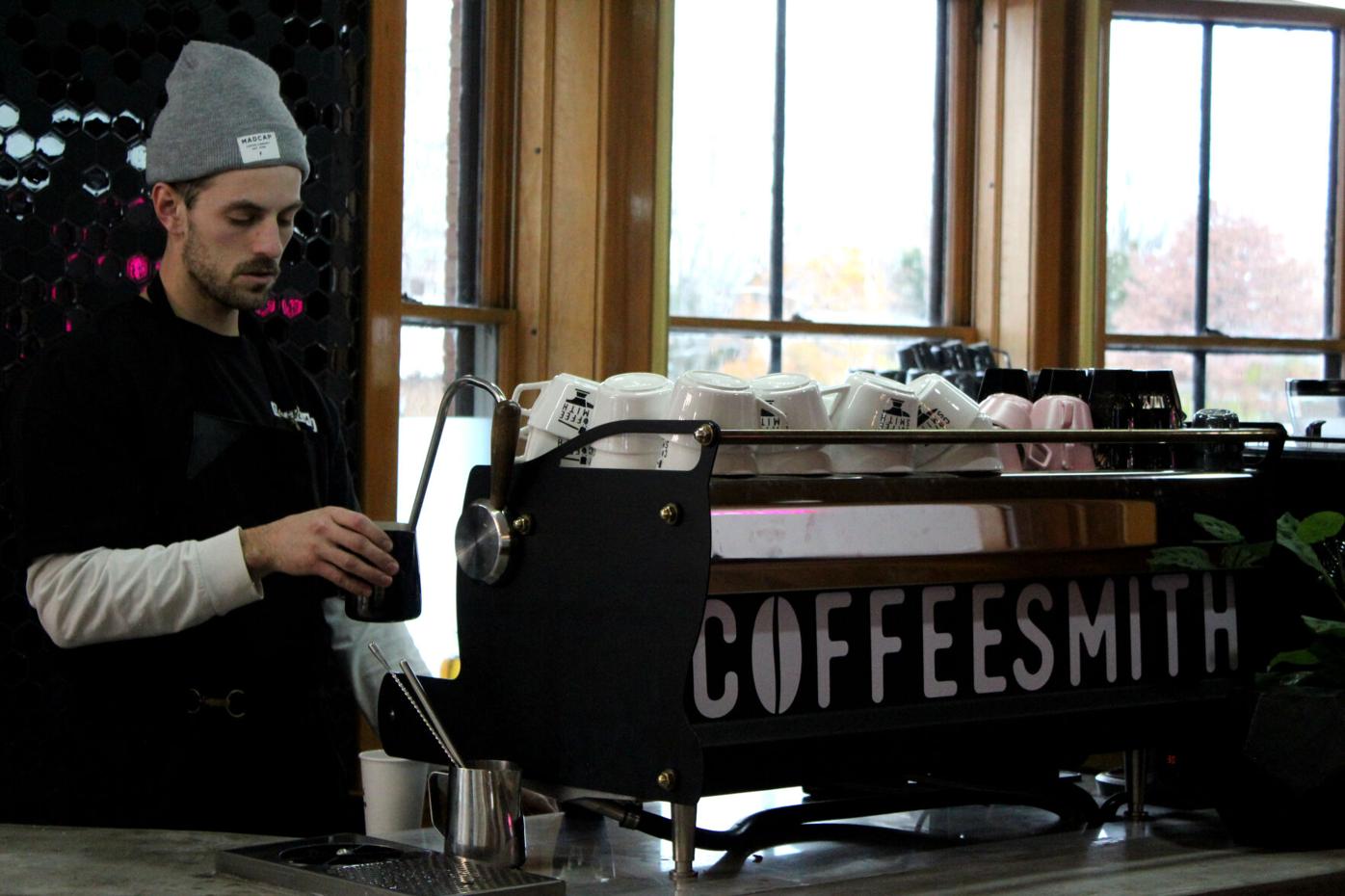 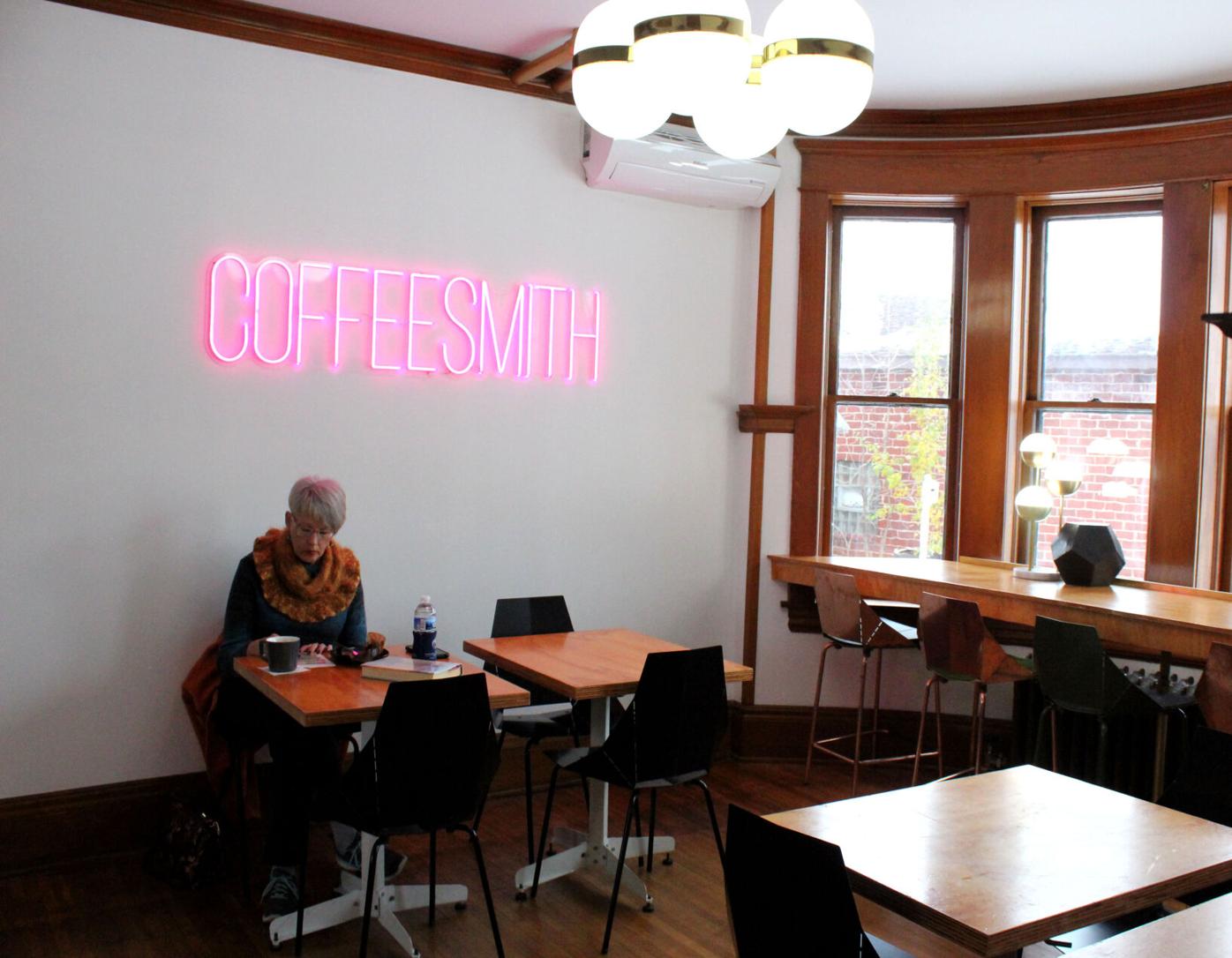 The renovated room, past the front entryway, is one of two sitting areas on the first floor of the 1912 former Houle home. 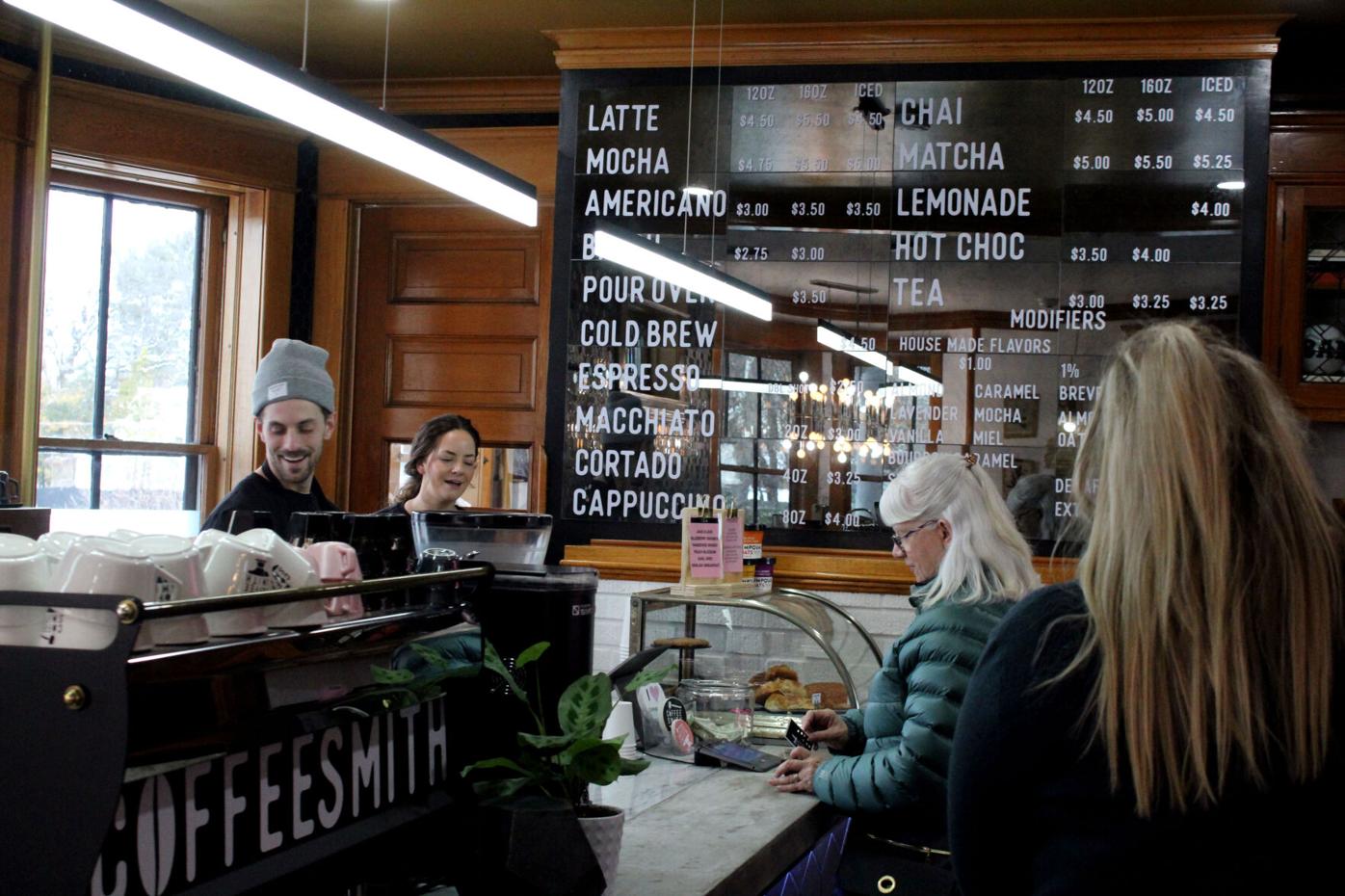 Calvin Waddle and his sister Chloe, who is a manager, work front-of-house service to help customers on Monday, Nov. 15. 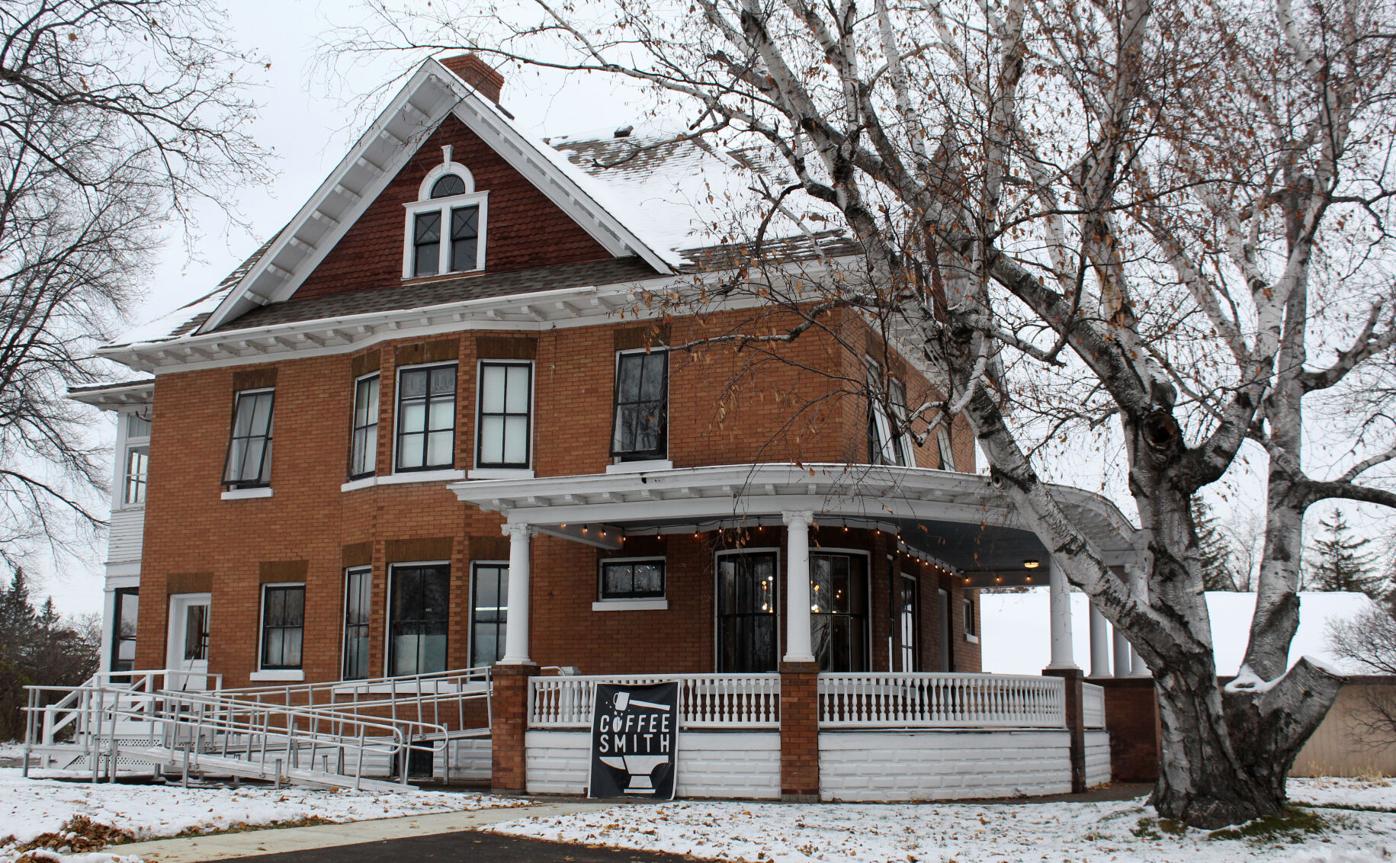 The renovated room, past the front entryway, is one of two sitting areas on the first floor of the 1912 former Houle home.

Calvin Waddle and his sister Chloe, who is a manager, work front-of-house service to help customers on Monday, Nov. 15.

The coffee shop is located at 432 N. Shore Drive in a historic 1912-home formerly owned by the Houle family. (For years it had been used as an event site before the previous owners put it up for sale.) Waddle said the historic home aligned with his idea for what he wanted his shop to be.

“We found out that it was sitting vacant, and we were like, ‘This is so sad, that this gorgeous, gorgeous house is just sitting here vacant.’ … So that kind of really inspired him,” said Chloe Waddle, Calvin’s sister.

They redecorated the home with modern light fixtures and artwork. Chloe said they did a lot of the construction themselves and hired out when needed, but the bones and structure of the historic house remain intact with artisan woodwork and window paneling, providing a unique space for a coffee shop on the first floor of the home.

“I think our style of coffee is more craft than anywhere else in Forest Lake,” said Chloe, who is also a manager at Coffeesmith. She said they kept tradition in mind when coming up with their menu, sticking to the style of traditional cappuccinos and macchiatos, “like you’d see in Europe.”

Calvin added that they are training all employees to “master the form of latte art” and understand what goes into providing a cup of coffee to a customer.

“All of our equipment’s manual, so they really have to understand what changes they’re making to the coffee, what effect it’s going to have to the end product,” Calvin said. Both Calvin and Chloe echoed the view that the coffee they are making is not an average, quick-pickup-and-go cup of joe.

“You take time on your coffee. It’s not a drive-thru where you’re getting in and out with a drink in a minute,” Chloe said.

Calvin’s vision of crafting quality drinks isn’t only in the process of using the espresso machine, but the ingredients, such as homemade flavor sauces and syrups, along with quality beans and dairy. Forest Lake-based Autumnwood Farm, which uses a unique pasteurizing process for better quality dairy, is their dairy provider. Duluth Coffee Company is where they are purchasing beans from, and the company also aligns with the mission of dedicating credit to the farmers for their craftsmanship of growing the coffee, according to Chloe.

“Their beans are actually named after the farmers that they get their beans from. So they like to focus on them and not just the beans themselves,” Chloe said.

Calvin worked in the coffee industry for about seven years and said he fell in love with it. Initially, he started at the coffee chain Dunn Brothers and wound up at Quixotic Coffee in St. Paul.

During his time at different shops he was studying nursing until talking with some of his friends who pushed him to take the leap to pursue running his own coffee shop.

“My friend Stephanie, she was like, ‘If you don’t want to do nursing school and want to open a coffee shop, just do it,’” Calvin recounted.

When he started searching for the suitable location around Forest Lake, the historic home felt right. He told the Forest Lake Times for a past story he was printing business cards with that address before he officially closed on the home in April 2019.

The coming together of the business has been a long process that Calvin began to envision before he chose a location. The time since April 2019 didn’t present many COVID-19-related challenges, but the construction on the property was the primary focus of the team, according to Chloe.

“We did a lot of it ourselves, what we could; and plumbing and stuff, we had to hire out,” Chloe said.

Pandemic-related challenges came up while working on getting city permits approved.

“Because of COVID, people weren’t in offices and people (were) working from home, so it was a lot more difficult to get in contact with people,” Calvin said, adding that he lost his job, as many Americans did.

The Coffeesmith team worked around the challenges to give Forest Lake and people from out of town a taste of their coffee during the summer of 2020. They borrowed a food truck from the owner of Anchor Coffee in White Bear Lake and used that to sell coffee for the season.

“We’re really good friends with him, and we were talking about our struggles of opening and all that jazz. And he was like, ‘Just take my trailer for the summer; use it, don’t worry about anything,’” Chloe said.

This allowed the Coffeesmith team to start building a base in the community and reaching people outside of the Forest Lake area via social media.

Social media is a multi-faceted tool for the Coffeesmith team, since they used it to hire staff. Calvin said they had around 11 applications within the first few days of posting about job openings.

He’s hopeful for a good first year of business and has plans for future expansion in other places, which he’s not yet willing to disclose, but he hopes to roast his own beans and make his own baked goods in the future.