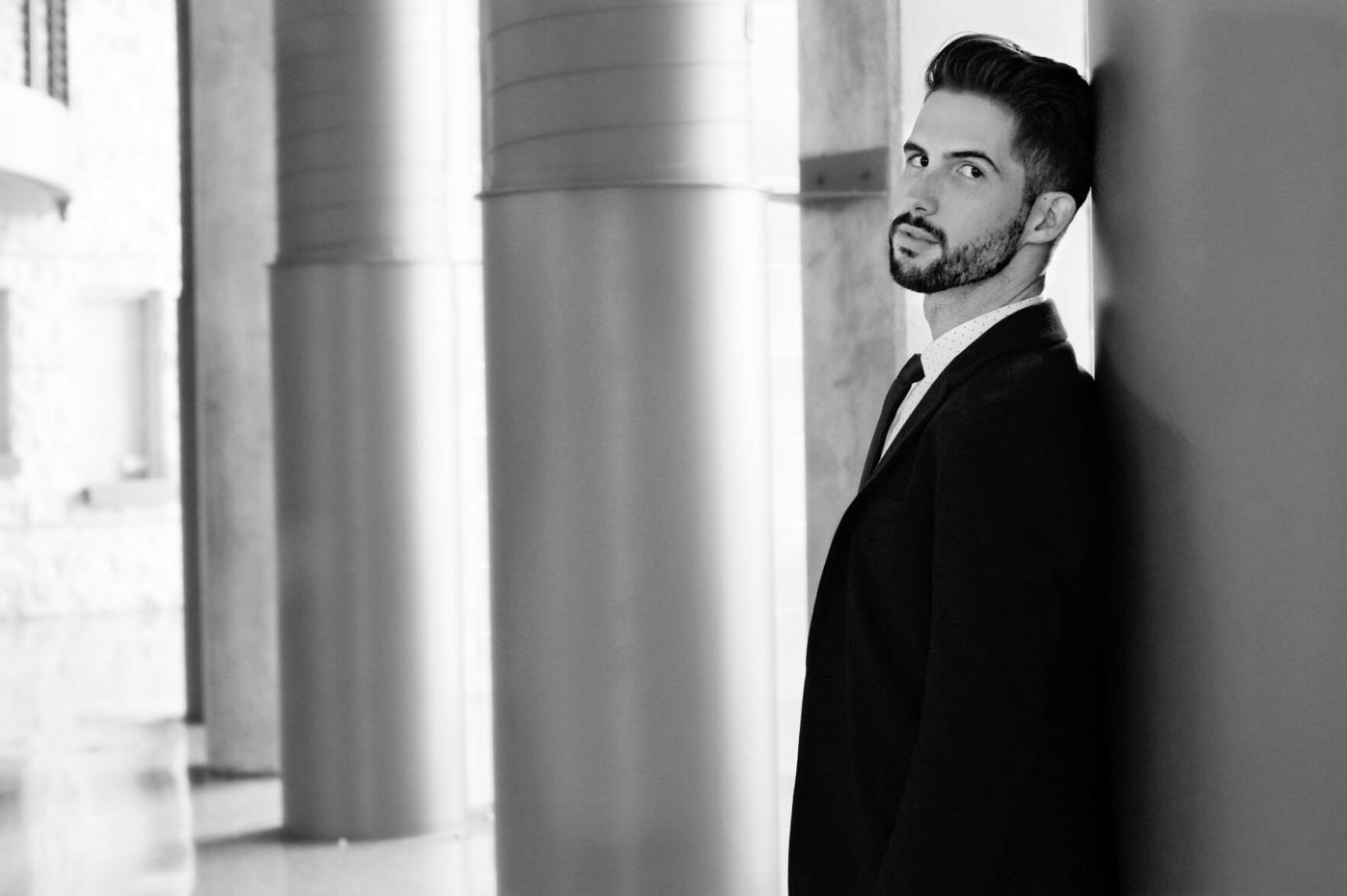 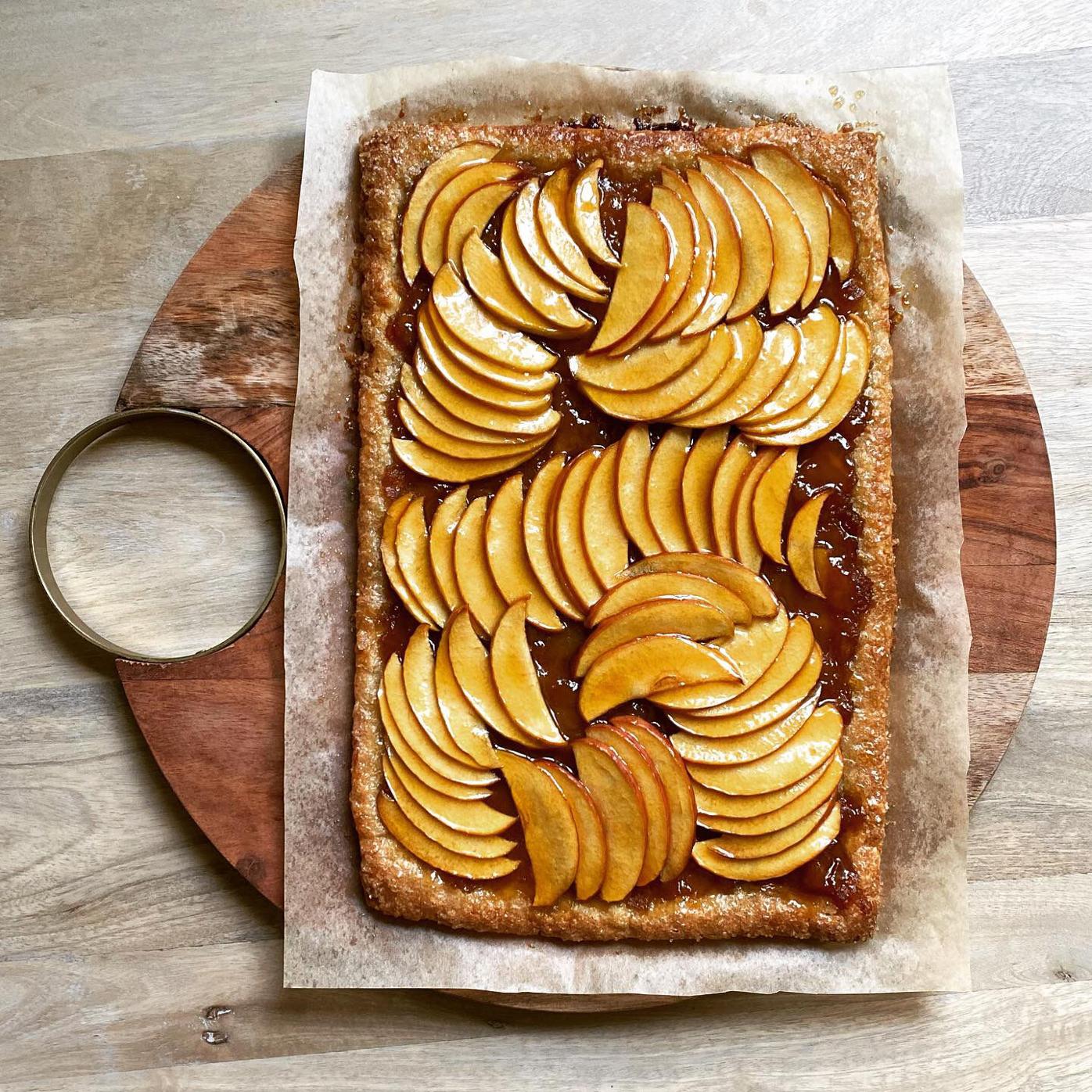 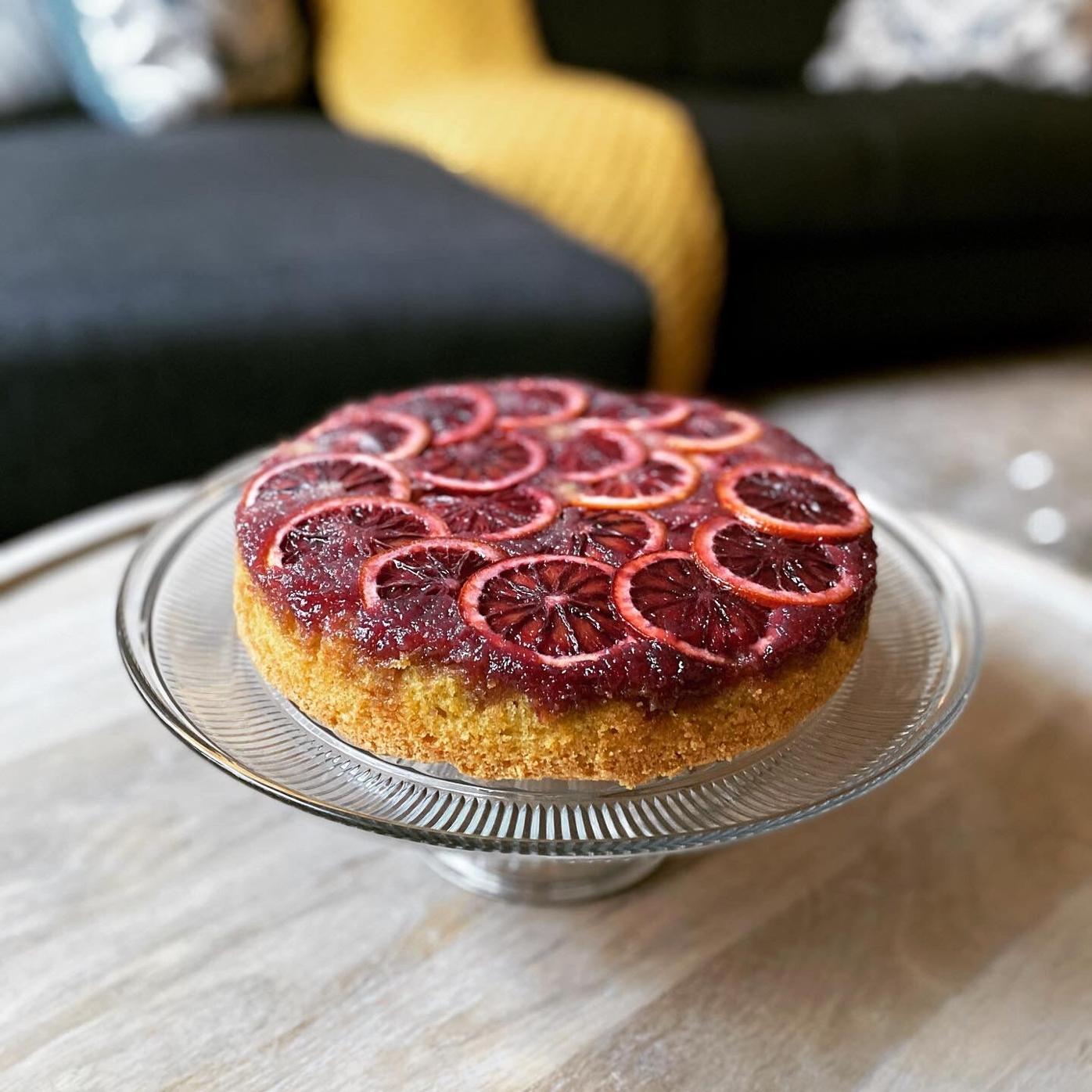 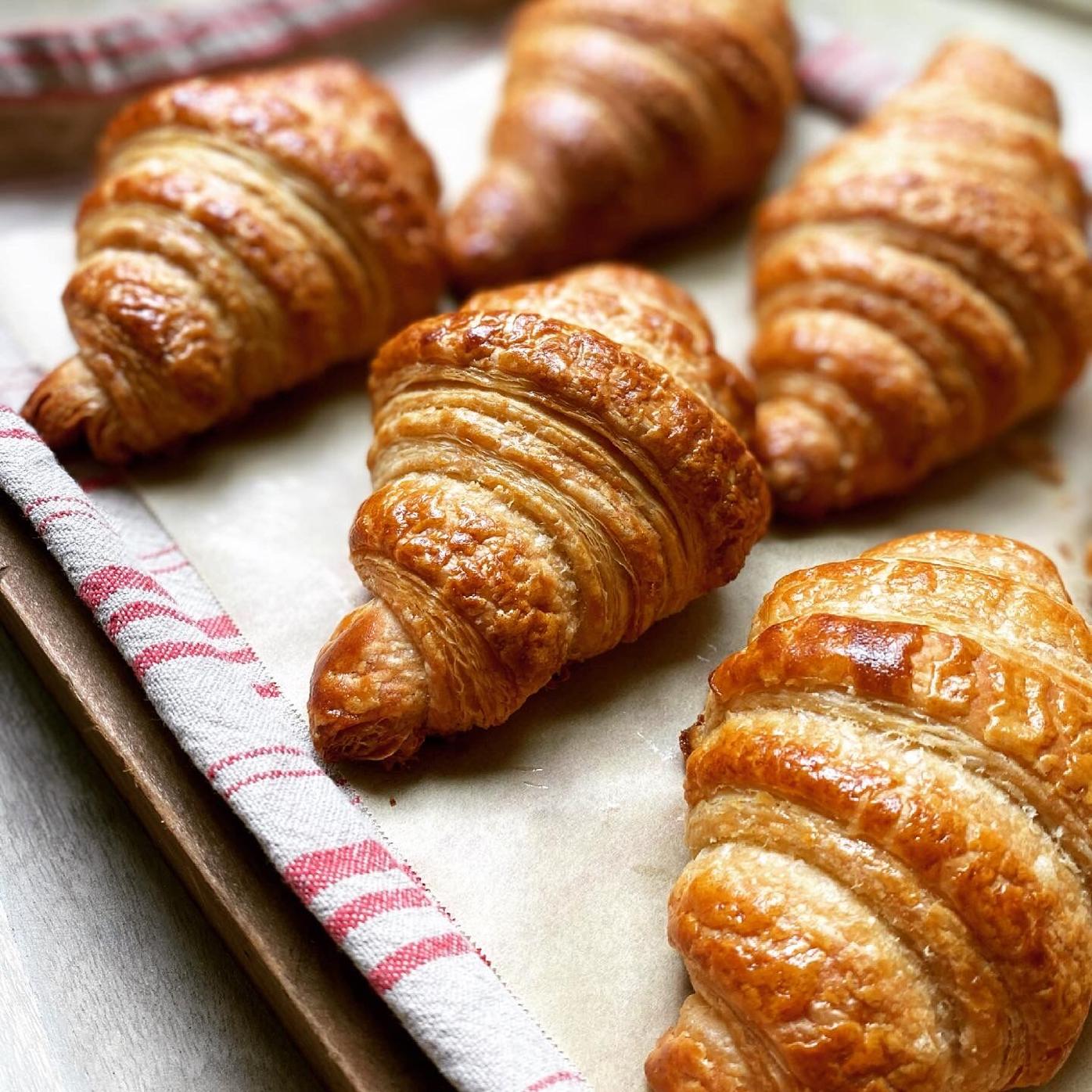 Spelt croissants, blood orange and olive oil upside-down cake, and apple tarts are just three of 80 desserts a former local student has made on his way to baking 105 desserts by the end of 2021.

Radziun, the son of Deb and Jim Radziun, is in his third year of full-time teaching at Texas A&M - Commerce where he is an assistant professor of voice, and lives in Lake Highlands, a neighborhood in northeast Dallas.

It was during the pandemic that Radziun watched the movie “Julie and Julia” for the first time, and thought about what it would be like to bake through an entire cookbook, cover-to-cover. Radziun has baked 80 recipes so far, with 25 left to go.

“Several of the recipes have been challenging, but I look at them as learning opportunities to expand my skills as a baker. One of the most difficult was Claire’s (Saffitz) spelt croissants. The process of making croissants is very tedious, as they are what is called a laminated pastry. You must carefully encase butter within the dough, and then perform a complicated series of turns and folds while rolling out the dough in order to get the classic flaky layers croissants are known for. This must be done very quickly, as the butter needs to stay as cold as possible, so working quickly is essential. The results were amazing – I couldn’t believe that I made croissants from scratch.

“Another complicated but delicious recipe is Claire’s blood orange and olive oil upside-down cake. This also happens to be the iconic recipe that is on the cover of the book. The flavors in this cake were so unique and complex – a savoriness from the olive oil, along with a beautiful floral note from orange blossom water complimented the slight bitterness of the blood oranges. It was complex and divine,” Radziun added.

Radziun’s favorite recipe so far has been the oat and pecan brittle cookies.

“The oatmeal cookie dough is loaded with pieces of homemade pecan brittle (which was fabulous even by itself),” Radziun said. “The combination of salty and sweet is a favorite of mine, and I found these cookies irresistible (even though they used about every bowl and utensil in my kitchen – including both a food processor and my KitchenAid mixer).

Radziun is committed to finishing all 105 recipes by the end of 2021.

“I am bound and determined to finish all of the recipes in the book before the clock strikes midnight on Dec. 31. As the school year and my performance schedule have been picking up recently, I find myself baking late into the night occasionally,” Radziun said. “I recently made Claire’s fruitcake (which takes two months to preserve), which baked for three hours at 275 degrees. The cake was done around 1:30 a.m., so I just set the timer on my nightstand and went to bed. When it beeped, I got out of bed, removed the cakes from the oven to cool and went back to sleep.”

Watching others react to the flavors of the desserts Radziun bakes for them brings him great joy.

“For me, baking is a creative outlet much like singing. I wasn’t able to perform publicly during the first year of the pandemic, so baking felt like a good replacement. I was still about to create beautiful things that people enjoyed with their senses, much like they do with music,” Radziun said. “I share my baked goods with my friends and also with my students. It’s gotten easier as lockdown restrictions have loosened up a bit. During the first part of the pandemic, I was delivering baked goods to friend’s front porches. Now, I am able to enjoy baked goods in person with close friends who have also been vaccinated.”

Even though Radziun is enjoying the desserts he makes, he is maintaining a healthy lifestyle.

“I think as Americans, many people are unnecessarily obsessed with body image/weight. I don’t like this response, because I don’t think it is healthy from a mental standpoint,” Radziun said. “Dessert is something to be enjoyed, without guilt. Food does not have moral value. I enjoy walking outside, about 4 miles a day, and I also enjoy eating dessert. My late grandmother, Mary Dahlgren, of Cambridge, always said, ‘Everything in moderation.’ Wiser words were never spoken. I miss my grandmother so much, and her baking. She was an incredible baker and human being.”

Radziun’s musical journey began during his time at Cambridge-Isanti High School where he sang in the concert choir under the direction of Frank Wells, accompanied various choirs on piano and also played piano in the pit orchestra for several musical productions.

“My musical journey began on the piano, which I began studying with Mrs. Leanne Norland in Cambridge in second grade. I continued to study piano throughout high school and college, but in 11th grade I found a voice teacher named Liz Grefsheim in Andover, and she helped spark a passion in me for solo singing. While studying voice with her, I decided that I wanted to major in voice in college,” Radziun said. “I attended Northwestern College in St. Paul for my bachelor’s degree (now called University of Northwestern - St. Paul) in vocal performance. After graduating, I went on to pursue my master’s degree in vocal performance from the Bard College Conservatory of  Music in New York, where I had the opportunity to work with world-renown soprano Dawn Upshaw. My time in New York was life changing. While I attended Bard, I began baking professionally – frequently being hired by the conservatory to cater events and recitals. This is where my love for baking really took off.

“After my time at Bard, I went to the University of North Texas, where I received my doctor of Musical Arts degree in vocal performance. While in school at University of North Texas, I began working at Texas A&M - Commerce as an adjunct instructor of voice. After finishing my degree, I was hired at Texas A&M - Commerce as an assistant professor of voice,” Radziun added.

Living in Texas has given Radziun a chance to expand his musical career professionally.

“I like living in Dallas because it is an epicenter of culture and a great place to be a professional musician. There are multiple professional choirs and musical ensembles that I perform with regularly, which is an advantage of living in such a large metroplex. I also sing as a professional staff-singer at a church in Dallas, the Episcopal Church of the Incarnation,” Radziun said. “Being in a city where there are a variety of churches that value a high level of musicianship and hire 12 professional staff singers is a very good thing for someone in my field of work. I also love that there are literally limitless Tex-Mex restaurants, which is probably my favorite type of cuisine.”