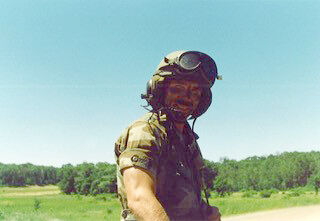 Bob Dettmer trains at Fort Gordon in Augusta, Georgia. Dettmer joined the Army as a reservist in 1986 and spent 25 years in the military, eventually retiring as a chief warrant officer in the electronic intelligence unit. 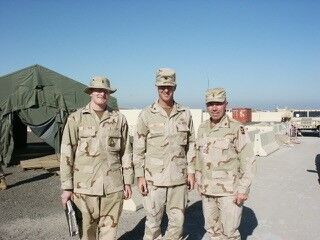 Bob Dettmer (right) joins his son (left) Travis, and brigade commander, Col. Jones at Camp Doha in Kuwait during a deployment for Operation Iraqi Freedom in 2003. 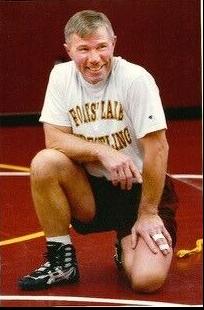 Dettmer served as head wrestling coach at Forest Lake Area High School from 1975 to 2007, coaching 13 state champions while leading the 1993 squad to the Class 2A state title.  He was deployed during the 2001-2003 seasons. 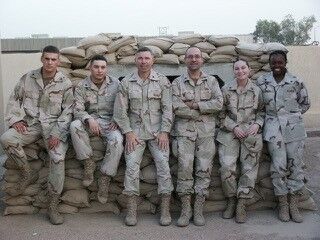 Bob Dettmer, third from left, poses with his Section Team at Camp Doha in Kuwait. Dettmer spent 20 months on active duty after receiving the call in late November 2001, roughly two months after 9/11. 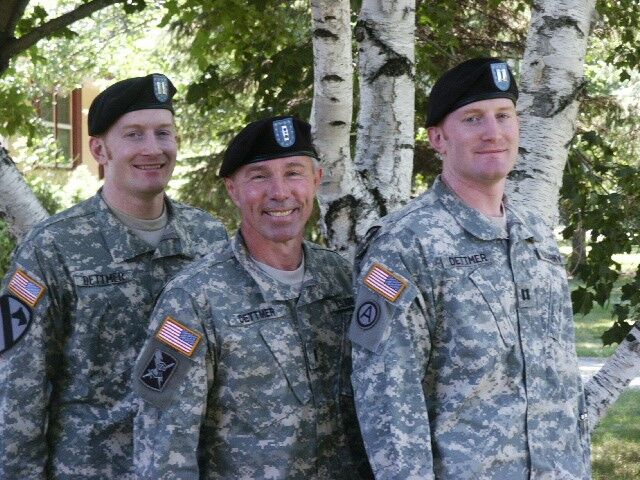 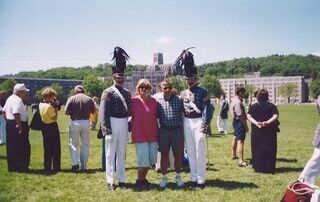 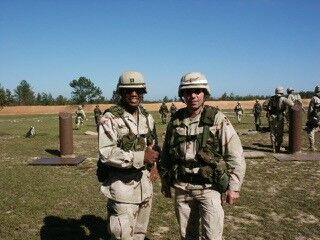 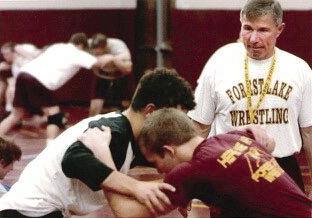 Bob Dettmer trains at Fort Gordon in Augusta, Georgia. Dettmer joined the Army as a reservist in 1986 and spent 25 years in the military, eventually retiring as a chief warrant officer in the electronic intelligence unit.

Bob Dettmer (right) joins his son (left) Travis, and brigade commander, Col. Jones at Camp Doha in Kuwait during a deployment for Operation Iraqi Freedom in 2003.

Dettmer served as head wrestling coach at Forest Lake Area High School from 1975 to 2007, coaching 13 state champions while leading the 1993 squad to the Class 2A state title.  He was deployed during the 2001-2003 seasons.

Bob Dettmer, third from left, poses with his Section Team at Camp Doha in Kuwait. Dettmer spent 20 months on active duty after receiving the call in late November 2001, roughly two months after 9/11.

Bob Dettmer knew it was a bad sign when his wife, Colleen, told him to turn on the TV.

The date was Sept. 11, 2001, and Dettmer was getting ready for his job as a teacher at Forest Lake Area High School.

“When I turned the TV on, I saw the one tower [of the World Trade Center] in flames, and a few minutes later I watched the second plane hit the second tower,” he said. At the time, Dettmer was more than a teacher and the wrestling coach at Forest Lake: He also was a member of the Army Reserve, serving as a chief warrant officer in the electronic intelligence unit.  “Right away, I told my wife, ‘I think my Army Reserve intelligence unit is going to get called up.’”

That is just one of the reasons the memories of that day are fresh in his mind.

“Students and staff couldn’t believe that something like this could happen in America,” Dettmer said. “The world changed after that. We found out we couldn’t take for granted the freedoms that we have, because there were people out there trying to take those freedoms away from us. People were glued to their TVs, watching what was happening.”

During Desert Storm, his unit had not been called up.

Dettmer did not enter the military until after he already was a teacher and coach at Forest Lake, but that was not because he didn’t try to enlist earlier.

He graduated from Faribault High School in 1969, during the height of the Vietnam War. Dettmer was ready to enlist after graduation until his father, who was involved with fighting in World War II, told him to honor a wrestling scholarship at Bemidji State, instead.

“I was just 17 years old, so I did what my father told me to do,” Dettmer said with a laugh.

Dettmer was a three-time All-American in wrestling at Bemidji, winning an NAIA national title in 1971 and also posting a pair of third-place finishes. He and Colleen Wendt were married in 1972, and Dettmer graduated in 1973 before taking a job as a teacher and coach at Forest Lake.

Yet he did not stop thinking about joining the military.

“Recruiters would come in to school and talk to me about students and athletes who they were recruiting to enter the military,” Dettmer said. “All that time, I had in the back of my mind looking into the military as a second career.”

He talked to recruiters, and chose to join the Army in 1986, eventually spending 25 years in the military. Each summer he and his family would travel to a military outpost to complete his obligations.

“We had a 35-foot travel trailer, and the family would go with me,” Dettmer said. “The kids would spend time with me at the military base. It was something our whole family did together.”

In fact, Dettmer still remembers when he was commissioned as an officer while his sons were in junior high. After the ceremony he gave each son a silver dollar.

“I told them, ‘In the Army, the tradition is that, the first person who gives you a salute, you give them a silver dollar,” Dettmer explained. “The years went by, and I forgot about it.”

Given that vacation history, it is no surprise that both of Dettmer’s twin sons, Robb and Travis, graduated from West Point and are now lieutenant colonels in the Army.

“[Graduation] was quite a sight. When Colleen and I walked up to them, I was wearing my uniform, and I gave each of them a big salute. And they pulled out those same silver dollars that I gave them in junior high, and they gave them back to me.

“I still have those silver dollars.”

On Nov. 26, 2001, Dettmer got the active duty call. Four days later, he began the drive to Fort Gordon, Georgia, but did an about face when he got the call that his wife had a minor heart attack.

“I drove all night to get back home. The doctors had put two stents in, and she has been fine ever since. But I spent a few weeks at home, and once the doctor said she would be fine, I drove down to Georgia.”

Dettmer was hoping to be gone no more than a year. Instead, he spent 20 months in active duty, participating in Operation Enduring Freedom – which focused on Afghanistan and the Taliban – and later Operation Iraqi Freedom – the invasion of Iraq to overthrow Saddam Hussein.

“My job was to identify the enemy’s radar systems, because they controlled weapon systems,” he said. “Within a couple of months, we were able to identify all of their radars. When we found them, our Air Force pilots would go out and destroy them.”

After taking severe losses early, the enemy made a smart decision to put those radar systems on trucks to make them mobile, and thus harder to destroy.

“One day we were looking for a Spoon Dish, an early warning system, and by chance it was parked along the side of the road,” Dettmer said. “We called for a strike, and because we had a camera on the truck, we were watching in real time.

“Suddenly, the doors on the truck flew open and two Iraqis ran away. The plane came in, fired a missile – and missed. Then it had a malfunction, and it had to go back to base. So the two Iraqis jumped back into the truck, but we had a Predator that was allowing us to watch them.

“We followed them, and suddenly there was a big ball of fire. They were in such a hurry, they forgot to put the antenna down, and they hit a power line that blew them up.”

Dettmer eventually spent time at Camp Doha in Kuwait, taking him away from Forest Lake, his family and his wrestling team for the better part of two years.

Dettmer left just as the 2001-02 wrestling season was starting, which was one of many reasons his departure was so painful.

“We had a great team coming back,” he said. “It was heart-wrenching that I couldn’t be there for that team.”

Dettmer said he felt fortunate that Rich Elliot, Steve Hinrichs and Mark Smith were able to lead the team in his absence.

“Rich was my top assistant, and I told the parents that the team would be in good hands with Rich,” Dettmer said. “Then I had a ceremony with the team. I brought Rich to the center of the mat, with the team sitting around us, and I took my whistle off and put it around his neck. Then I said, ‘Rich, you’re in charge.’”

But missing those two seasons of wrestling paled in comparison to missing his daughter Krystle’s junior and senior years of high school. He was, however, able to return to Forest Lake in time to see his daughter’s graduation.

“Somehow Colleen was able to reach my commanding officer, a two-star general, and sent him an email asking if I could get a two-week leave to be there for my daughter’s graduation,” Bob Dettmer explained. “He must have been sitting at his computer terminal when it arrived, because he emailed her back immediately and said that, while he couldn’t promise anything, he would try. And he added a P.S. – he had four daughters.”

About a week later Dettmer got the word that he would be returning for Krystle’s graduation. It was kept a secret between he and his wife and just a few others. He was flown in just in time to attend a concert during which Krystle had a solo.

“They snuck me in behind the stage, and I had a handful of roses, and I listened as my daughter sang, ‘Someone to Watch Over Me.’ I was basically in tears. When she finished, I walked onto the stage, and we gave each other a huge hug,” he said.

It was a moment he and the rest of his family would remember for a lifetime.

“The moral of the story: Never underestimate the power of a mother.”

Now a member of the Minnesota House of Representatives from District 39A, which includes Forest Lake, Dettmer remembers how the events of 9/11 changed this country.

“I’ve always been a positive person, and I try to keep things in perspective,” he said. “When it first happened, I thought it was devastating to have it happen on our home soil. ...But I thought it really brought the country together, which was a positive. There were a lot of young men and women who joined the service, and I thought we all came together with resolve to defeat the terrorists.”