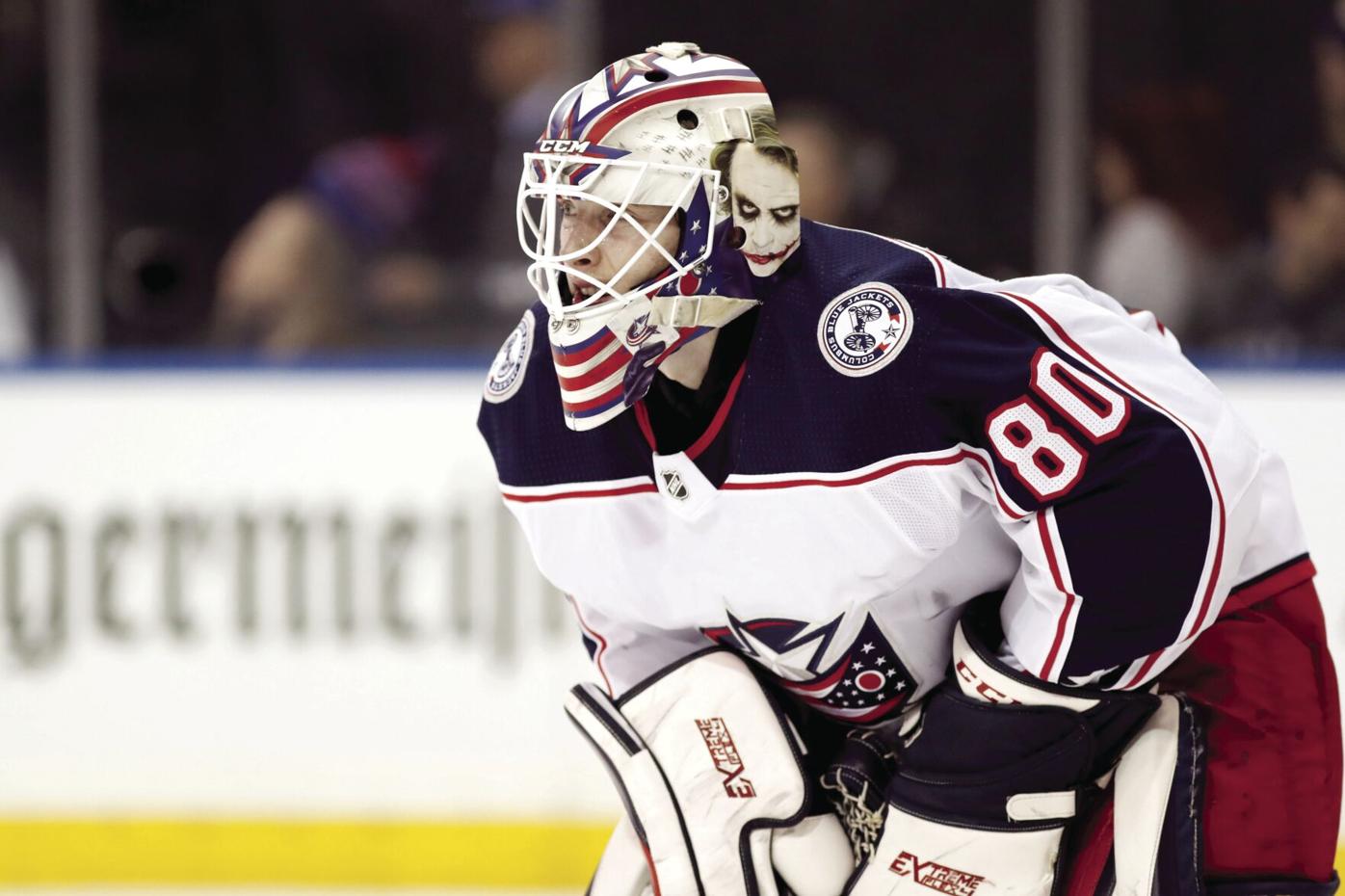 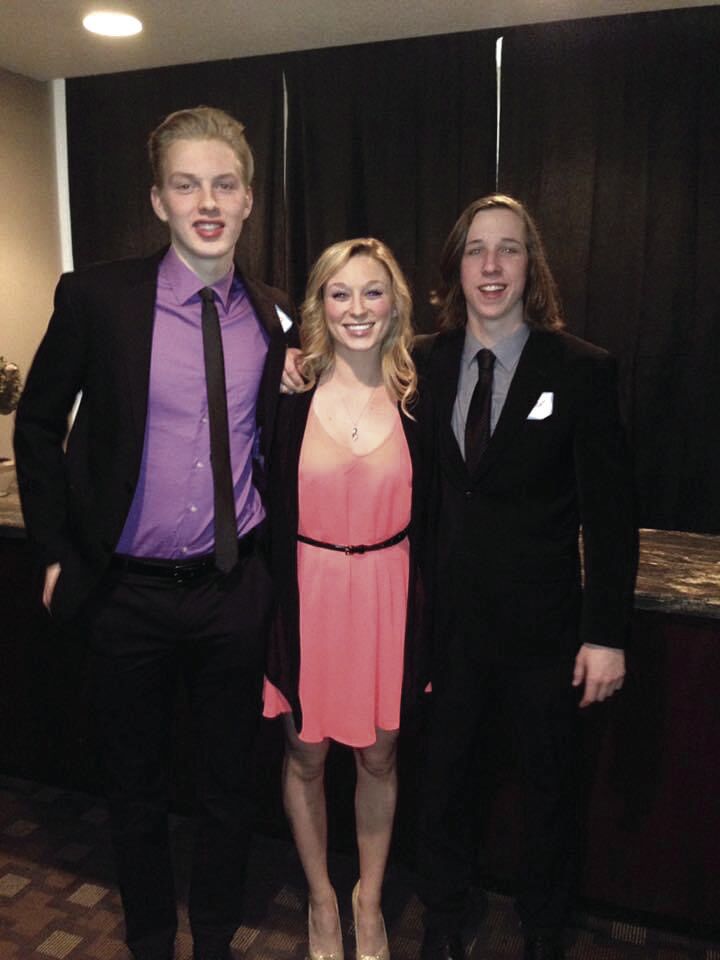 From left, Matiss Kivlenieks, Ellen Volner and Josh Fisher. Volner’s parents, Joe and Becky Balut, billeted both Kivlenieks and Fisher when the pair players for the Forest Lake Lakers during the 2014-15 season. 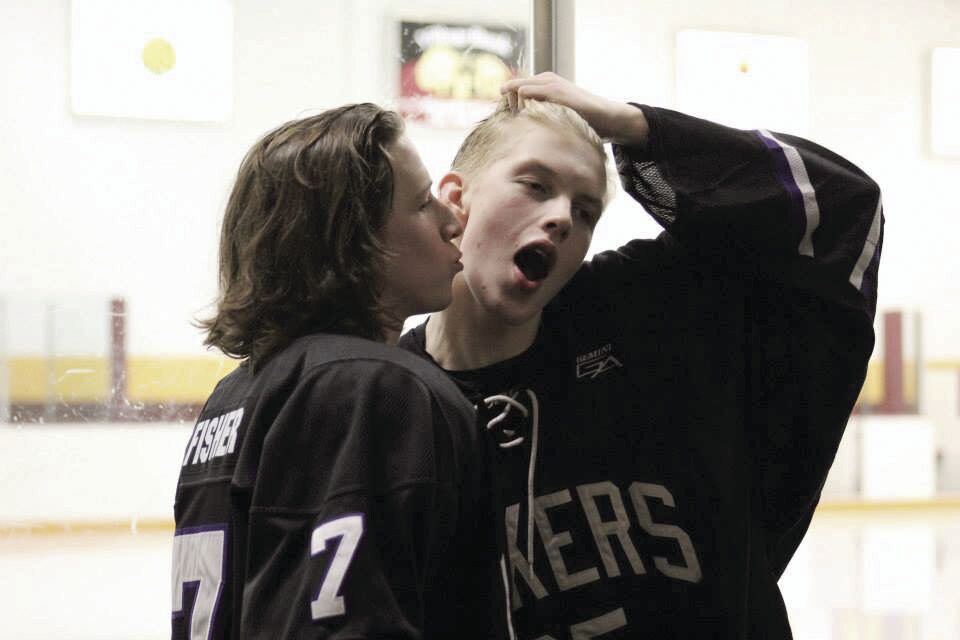 Josh Fisher, left, and Matiss Kivlenieks share a lighthearted moment on the ice. “They were quite the funny pair,” said Ellen Volner, whose family billeted both players with the Forest Lake Lakers during the 2014-15 season. 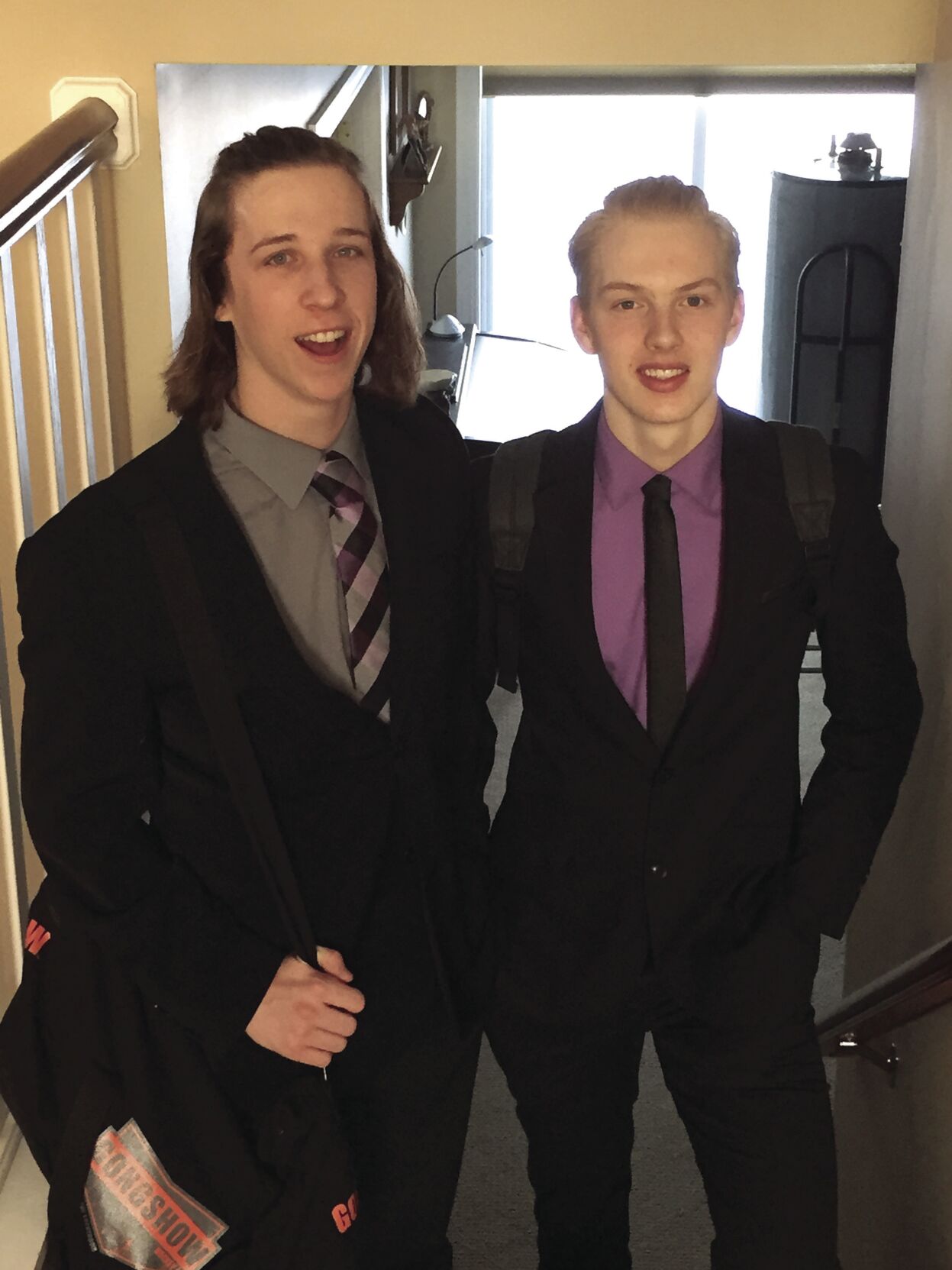 Forest Lake Lakers teammates and roommates Matiss Kivlenieks, right, and Josh Fisher asked Ellen Volner to put their hair up in a “man bun” before a game. “They both thought it looked so cool,” Volner said.

From left, Matiss Kivlenieks, Ellen Volner and Josh Fisher. Volner’s parents, Joe and Becky Balut, billeted both Kivlenieks and Fisher when the pair players for the Forest Lake Lakers during the 2014-15 season.

Josh Fisher, left, and Matiss Kivlenieks share a lighthearted moment on the ice. “They were quite the funny pair,” said Ellen Volner, whose family billeted both players with the Forest Lake Lakers during the 2014-15 season.

Forest Lake Lakers teammates and roommates Matiss Kivlenieks, right, and Josh Fisher asked Ellen Volner to put their hair up in a “man bun” before a game. “They both thought it looked so cool,” Volner said.

“I was interviewing for the opportunity to coach the team the next season, and I watched the team play at the Bloomington Ice Gardens,” Canfield said. “I sat in the top row, and I watched for five minutes. Then I said out loud, ‘Not only is that goalie [Kivlenieks] the best player on the ice, he’s going to play in the National Hockey League.”

It was an audacious assessment, considering the team was playing in what was then called the Minnesota Junior Hockey League. The league eventually merged with the U.S. Premier Hockey League, a Tier III junior league that produces mostly Division III hockey players.

But Canfield’s assessment proved to be accurate. Kivlenieks worked his way through the junior ranks and eventually signed a professional contract with the Columbus Blue Jackets, and the 24-year-old Latvian made his NHL debut with the Blue Jackets on Jan. 19, 2020.

That is what made the tragedy that took place on July 4 of this year all the more heartbreaking. Kivlenieks, who was celebrating the Fourth of July with Columbus goaltending coach Manny Legace and fellow Blue Jackets goaltender Elvis Merzlikins at Legace’s suburban Detroit home, was struck and killed when fireworks inadvertently tipped over and discharged directly at him.

“We are shocked and saddened by the loss of Matiss Kivlenieks, and we extend our deepest sympathies to his mother, Astrida, his family and friends during this devastating time,” Blue Jackets president of hockey operations John Davidson said in a statement. “Kivi was an outstanding young man who greeted every day and everyone with a smile, and the impact he had during his four years with our organization will not be forgotten.”

In fact, those who knew him best – such as Canfield and Ellen Volner, whose parents, Joe and Becky Balut, served as billet parents when Matiss lived in Forest Lake – want his memory to stand for more than just his brief NHL career.

“I loved Matiss, and I still love Matiss like the brother he was,” said Volner, who currently is stationed in Germany with her husband and daughter. “I want to do right by his name. I want everyone to know what a joy he was to be around. How fun he was. And how lucky I feel to have had that year with him.”

Learning on the ice

Canfield, who himself played goaltender during his hockey career, explained that Kivlenieks immediately caught his eye because of the way he dominated play with the Lakers.

“Matiss looked like a man among boys, and he looked the part of a prototypical NHL goaltender,” Canfield said. “He was big and mobile, and he was so far ahead of the game at that level, you could see he was destined for big things.”

That was not the case when he began his career in his native Latvia. Kivlenieks played just one game for Prizma Riga in 2011-12 and had a bloated 9.52 goals-against average; the following year he was the third-string goalie for the Prizma U18 team and played in just 12 games.

So Kivlenieks decided to come to the United States, and as a 16-year-old he played for the Edina Lakers in 2013-14. When that team moved to Forest Lake the following season, Kivlenieks moved with them.

Kivlenieks had a fine season in Forest Lake, posting a 2.23 goals-against average and a .930 save percentage while backstopping the Lakers to the division semifinals.

Meanwhile, hockey officials in his native Latvia noticed his improvement. In 2015, he led his native country to a bronze medal at the International Ice Hockey Federation World Juniors Championship, and the following year Latvia won the gold medal and was promoted to the top division.

“He was part of the growth of the sport in his country,” Canfield said. “When he went to the World Junior Championships and won, both he and his country were rewarded. He was the MVP and professional scouts started to notice him, and his team was promoted to the top level.”

Meanwhile his fine play at Forest Lake opened the door for him to play for Coulee Region in the NAHL the following season. Then in 2016-17 he led the Sioux City Musketeers to the United States Hockey League regular-season title and was named the USHL’s goaltender of the year.

“All he did is kick doors down,” Canfield said. “Whenever he got an opportunity, he would take advantage of it.”

Learning off the ice

In professional hockey, Kivlenieks’ nickname was “Kivi,” a shortened version of his last name.

In Forest Lake, his nickname was “Bernie.”

“Somehow, a group of guys called him ‘Bertice,’ and I shortened it to ‘Bernie,’” Canfield said. “I don’t know how it happened, but that was his nickname.”

Off the ice, Kivlenieks and teammate Josh Fisher lived with Balut family, and Volner said Fisher played a major role in helping the young Latvian assimilate into local culture.

“Josh and Matiss were already very close when they moved in with us, and Josh took care of Matiss so much behind the scenes,” Volner said. “They were quite the funny pair. When they weren’t at the rink they were eating all the food, playing video games and watching movies, or talking about getting back to the rink.”

“One of the things that still makes me laugh is how much Matiss loved shopping at Lululemon,” Volner said. “There was one time that I was showing him how to use the washer and dryer, and he was showing me all of his Lululemon clothing. He was trying to explain to me why those clothes were the best.

“He apparently wasn’t impressed with my attire.”

And Volner said Kivlenieks had some lessons to learn about a professional athlete’s diet.

“You were guaranteed to find a bag of Skittles in his hand at any given time,” she said. “It was a miracle to me how he stayed in such good shape with the amount of sugar he ate.”

Volner and Kivlenieks developed a brother-sister relationship to a point where Volner considered Kivlenieks a “goof” – in the best way possible, of course.

“He had a bit of a quiet exterior at first, but he was just a dork once you got to know him,” she said. “He truly just made everything a good time. He was a happy person and that really resonated with everyone around him.”

Canfield noticed Kivlenieks’ desire to learn off the ice as well as on it.

“His English was pretty broken, but he had such a genuineness about him,” Canfield said. “His want and desire as a pro player was echoed by his want and desire to grow as a human being. He always had a huge smile on his face, and he was very gregarious.”

And both noticed that Kivlenieks loved spending time with younger fans.

“The little kids at the games would be trying to get autographs from the players after the games and Matiss made each one of those kids feel special every time,” Volner said. “He didn’t just sign their jersey or poster or paper or whatever and that was the end of it. He’d interact with them and their faces were just glowing the whole time like, ‘Wow. I think we’re real friends.’”

The final steps to the NHL

After his fine season with Sioux City, Kivlenieks signed a three-year, entry-level contract with the Blue Jackets. He spent the majority of three seasons with the Cleveland Monsters, the Blue Jackets’ affiliate in the American Hockey League; his best season in the AHL came in 2019-20, when he posted a 2.96 goals-against and a .904 save percentage.

“He took such a long path to the NHL, he showed he was willing to do the work to reach his goals,” Canfield said. “And he was appreciative of everything he received, and everything that others did for him.”

Kivlenieks’ Forest Lake family beamed with pride when he advanced to the NHL for the first time and won his first NHL start, Kivlenieks stopping all but one of the 32 shots he faced in a 2-1 victory against the New York Rangers at Madison Square Garden.

“I remember his first game with Columbus, everyone from the team was posting pictures of him in net on the TV all over Snapchat and Twitter,” Volner said. “We were all so proud of him. I mean so proud. Everything he worked so hard for was paying off. It was awesome.”

Canfield simply beamed when his initial assessment was proven to be right — despite the long odds against it.

“The hair on my arms still stands up every time I think about that,” he said. “To watch a kid that you look at as your own is just unbelievable. And to not only see him play, but to see him and feel as if he belonged at that level, is just amazing.

“It made me feel good to be validated, to have Matiss prove that my judgment was right. But it was more than that: It was like watching your son play in the NHL. It was special, and it was something I will never forget.”

With an expansion draft looming, there was talk Kivlenieks might be picked by the Seattle Kraken. If not, there was a chance the young Latvian goalie might become a full-time back-up in Columbus.

Sadly, that part of the story will never be written because of the Fourth of July accident that has left a hole in the hearts of those who knew Matiss Kivlenieks best.

“I’m going to miss his humbleness,” Canfield said. “His is a great story that can inspire kids from anywhere. I’m saddened by his death, but I know these things happen.

“I think it’s important to preserve his legacy, what he meant to me and to others."