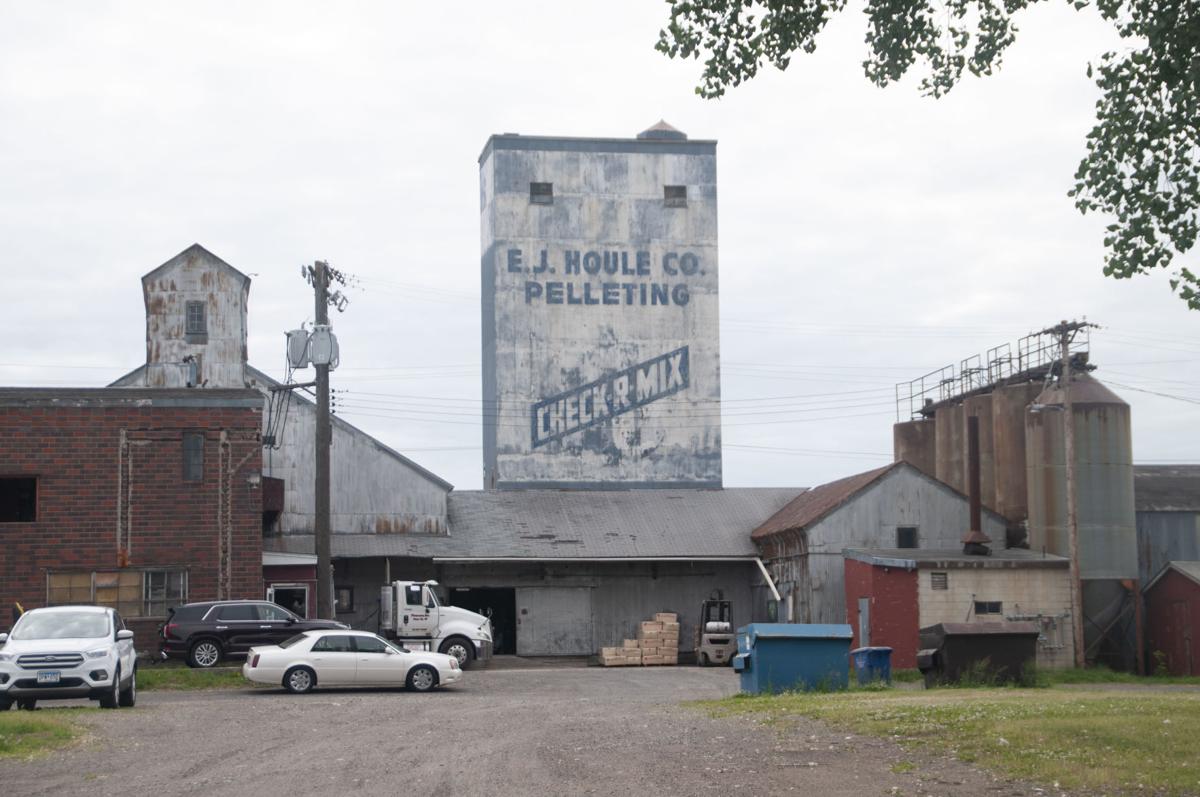 Houle's Feed Mill is set to be sold to Gertens, a Minnesota family-owned lawn and garden company. The iconic structure of the Forest Lake skyline will stay, according to the purchase agreement. 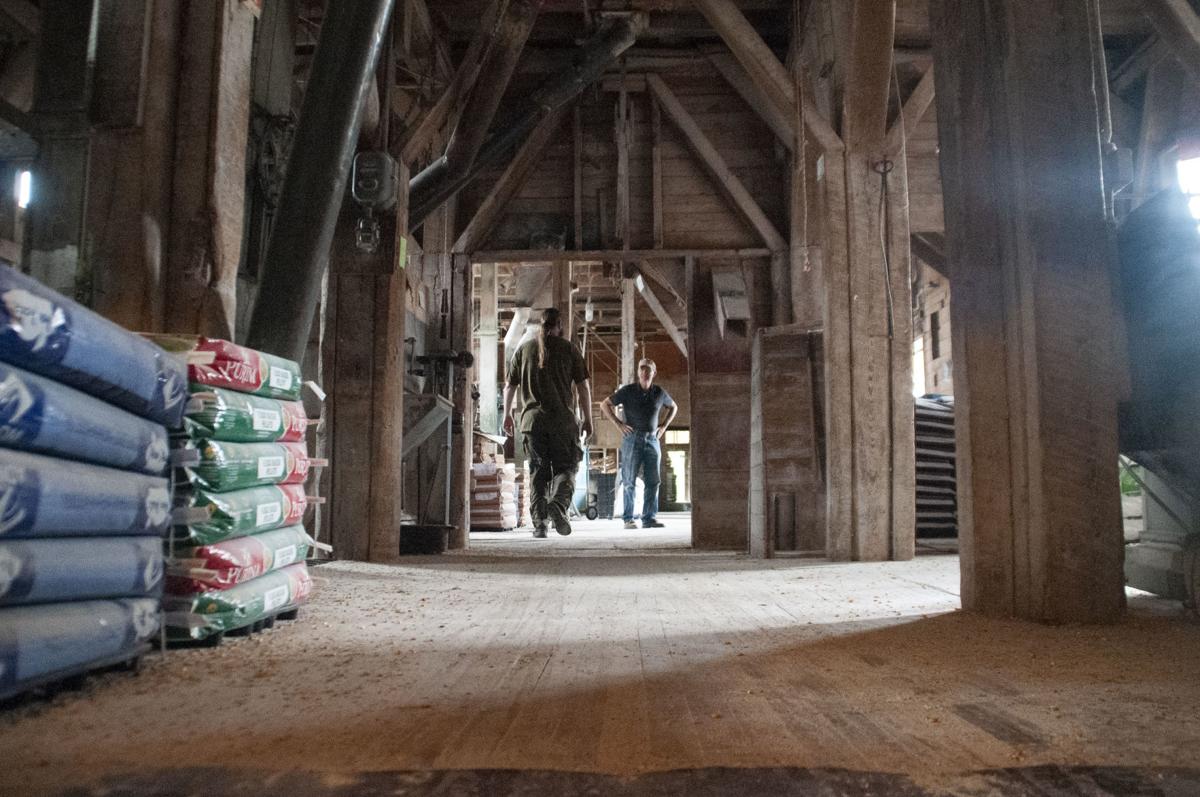 Jeff Houle, right, waits in the mill to hand out orders and wait for semi trucks. The building was built in 1917 by Jeff's grandfather, Edward J. Houle and his brother Harry. It's been used as a photography backdrop for weddings, high school senior photos, and remains and iconic fixture to the Forest Lake skyline. 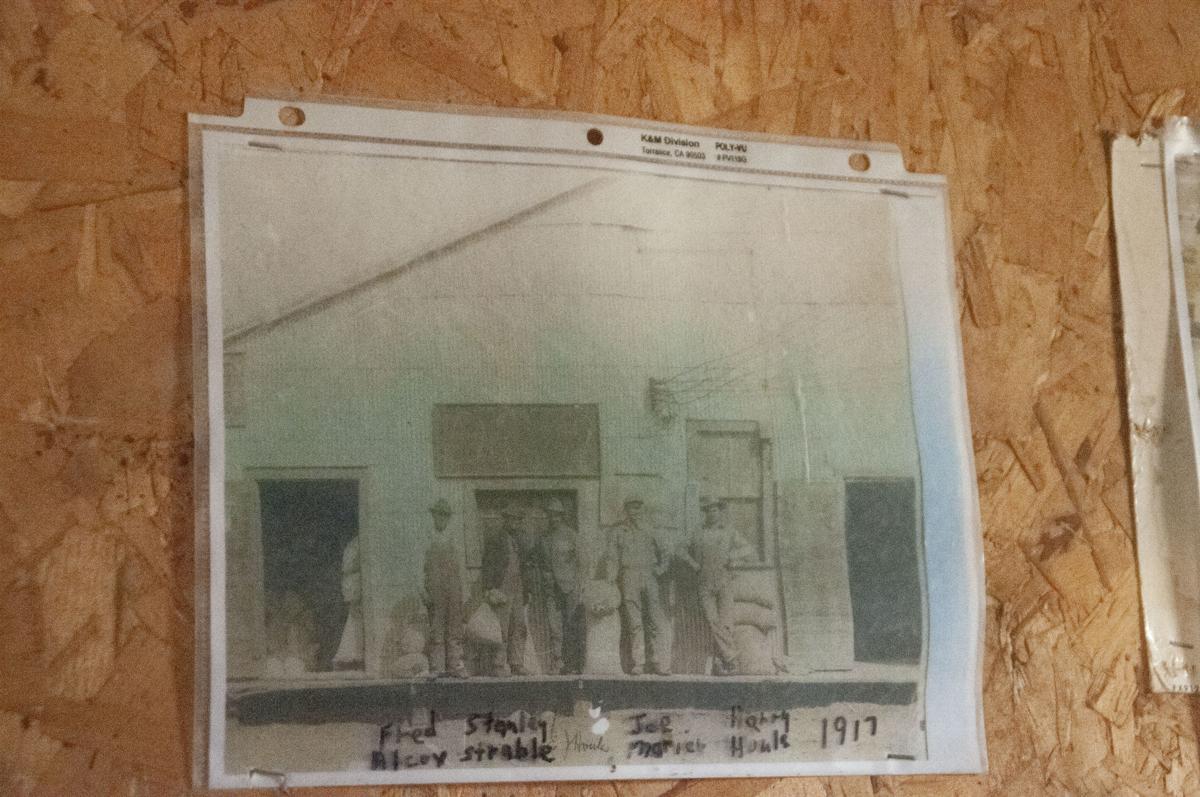 A photo dating from 1917, the year the structure was built, of founders E.J. Houle (middle) and Harry Houle (right) is posted inside the mill.

Houle's Feed Mill is set to be sold to Gertens, a Minnesota family-owned lawn and garden company. The iconic structure of the Forest Lake skyline will stay, according to the purchase agreement.

Jeff Houle, right, waits in the mill to hand out orders and wait for semi trucks. The building was built in 1917 by Jeff's grandfather, Edward J. Houle and his brother Harry. It's been used as a photography backdrop for weddings, high school senior photos, and remains and iconic fixture to the Forest Lake skyline.

A photo dating from 1917, the year the structure was built, of founders E.J. Houle (middle) and Harry Houle (right) is posted inside the mill.

Iconic structure to remain a fixture in Forest Lake

For over a century, the E.J. Houle grain elevator has been the fixture of Forest Lake’s skyline, and for now, that skyline is set to stay. The business, Houle’s Feed Mill, is set for a sale closing date of Sept. 1 to Gertens, a Minnesota family-owned lawn and garden company that will keep the structure intact.

“It’s an iconic structure,” said Bob Muske of Re/Max Synergy, the listing agent for the property. “... When [Gertens] came up, it just felt right.” The sale includes the Stillwater business and the Forest Lake 3-acre lot on the southwest corner of Broadway Avenue and Lake Street. (The business leases the land for the Stillwater location.)

Houle’s Feed Mill, known more formally as E.J. Houle Inc., has been in operation for over a century. The feed mill business began in 1916, operated by brothers Edmund J. and Harry Houle, originally selling potatoes. In the 1930s, the brothers’ sons, Willard and Merton, respectively, began their involvement in the business, gaining co-ownership stakes after World War II. Merton would eventually leave the business in the 1970s, and Willard’s children, the current co-owners and siblings, including Gary Houle, Mary Koski, James Houle, Jeff Houle, and Greg Houle, began taking a larger role. Willard died in 2008. It was not an easy decision for Gary and his siblings and co-owners to sell. But it was a family decision that it’s time, he said.

The business survived over the years due to its canny ability to adapt. Gary said the biggest transitionary period he can recall is between the 1960s and 1980s. When Gary first became involved with the business, the business still had a substantial production farm base in the area, but the freeway changed the area’s rural character, causing much of the farming scene to die out. As production farming left the area, however, the mill shifted its focus more and more toward hobby farming. Gary said the business sells more chickens now than it did 50 years ago; the difference is that instead of selling 500 chickens to a few clients, it sells five or six chickens to several hundred customers. The business also caters to the hobby horse industry and works with racers who compete at Running Aces in Columbus. Since there aren’t many feed mills left, the business draws from a wide area, boasting regular customers from the Twin Cities metro, western Wisconsin and as far north as North Branch. Gary estimated the business’s continued success is a combination of being able to roll with the changes and a helping of geographic good fortune.

“We’ve just been fortunate to be in a place where the suburban/rural business actually flourished,” Gary said in an earlier interview. “Reacting to the change is what we’ve done, and fortunately it’s been change that’s allowed us to do that. … If we would have been 80 miles north or west or east, we would have been out of business maybe 40 years ago.”

The road to closing

In late 2018, a purchase agreement was set between Houle and Gatehouse Capital, which intended to develop the land into a hotel and convention center. In January 2019, Gatehouse developer David-Elias Rachie, who lives in Forest Lake, told the Forest Lake City Council and Economic Development Authority in January that the predevelopment process for a Gatehouse project, which includes a feasibility study, typically requires a $150,000 deposit from the city, which could be refunded if the project goes forward. However, if the feasibility study was returned negative, he said, the city would likely be out $20,000 to $25,000.

Another option was presented to the city to purchase the land, which was listed at $1.75 million, but that was ultimately declined following concerns listed by most of the council, commission and authority members. Most concerns were over a lack of vision for the downtown area and the need for a plan for downtown revitalization before using city dollars toward the purchase of the land, specifically if a hotel and convention center would be the right fit for Forest Lake. Discussion about options for the hotel and convention center continued through March, at which point the council declined to take any action on the property, thus ending any purchase agreements.

The Houle family courted seven other buyers following that. Gary said that several of those buyers only wanted the Stillwater location and not the Forest Lake location, and at that time, no one wanted to purchase the Forest Lake property. A purchase agreement that didn’t include the purchase of the property was being drafted last fall with one buyer, but the two parties couldn’t come to an agreement on some areas about the purchase, thus ending another potential sale. Around that time, Gertens extended an offer on the land with an agreement to purchase both Stillwater’s and Forest Lake’s locations. The Houle siblings also appreciated that Gertens is much like the Houle business: It’s now in the hands of third-generation co-owners, including brothers Glen and Lew Gerten and brother-in-law Gino Pitera.

“That made a difference to us. One of the other buyers was a family business as well, but they didn’t want the land. We had three qualified buyers at the end we would’ve been comfortable selling to, but to be able to sell the land and business at the same time is what we’d prefer,” Gary said.

A purchase agreement was reached last November, and by December the documents were signed. Originally, the closing date was slated to be July 15 of this year, but the pandemic pushed that back until Sept. 1. Gary said that there was a little uncertainty about how it would affect each of the businesses, but the pandemic has been good for business for both Houle’s and Gertens.

“It’s almost blasphemous,” Gary said. However, because each business has been overwhelmed and in need of staff, the closing date needed to be extended

“There was no impact on the sale from COVID. They were just so busy. He believed in the purchase, and he was rather excited to get it,” Gary said.

One thing is clear in the agreement: The elevator will remain a fixture in Forest Lake. The name of E.J. Houle will remain on the side for some time, though Gary doesn’t know for how long. He knows how iconic the building is to Forest Lake, recalling the many wedding parties, advertisers, and high school seniors who use the historic building for pictures.

Gary is hopeful to see what Gertens does to the business and admired how Pitera revitalized Spike’s Feed, Seed and Pet Supply in Elk River.

“If you saw that before they started, it was so ugly it was unbelievable. I was so surprised when they renovated that and turned it into a money-making deal,” Gary said.

Gary doesn’t plan to slow down, and many of his siblings feel likewise.

“There’s a lot of satisfaction in working,” Gary said, but added he is glad to take a step back and spend more time with family.

“I’ll be happy to be done with the responsibilities,” he said. “It’s been a good ride.”