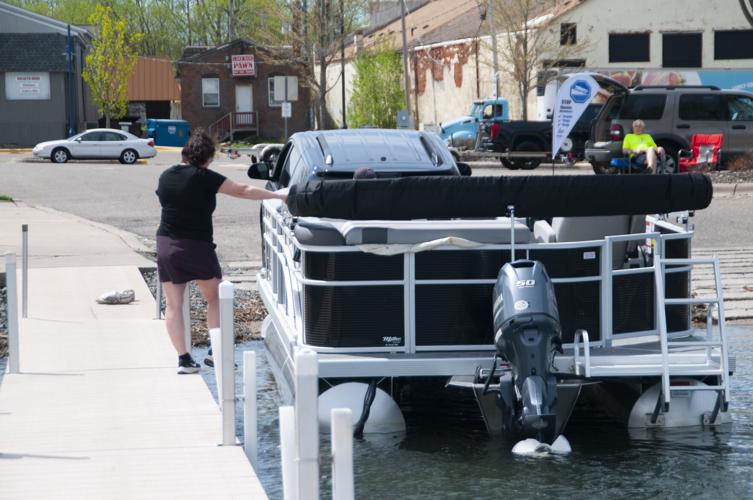 New plans for a revitalized downtown include the possibility of relocating the boat launch at Lakeside Memorial Park to ease parking woes. 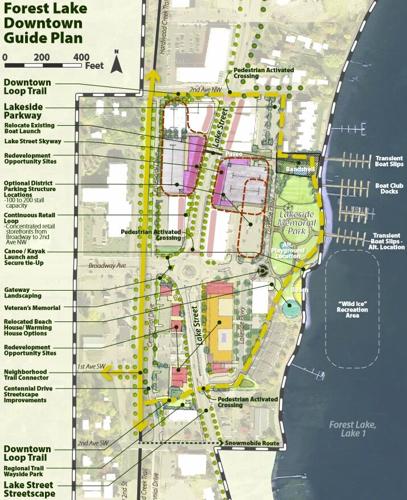 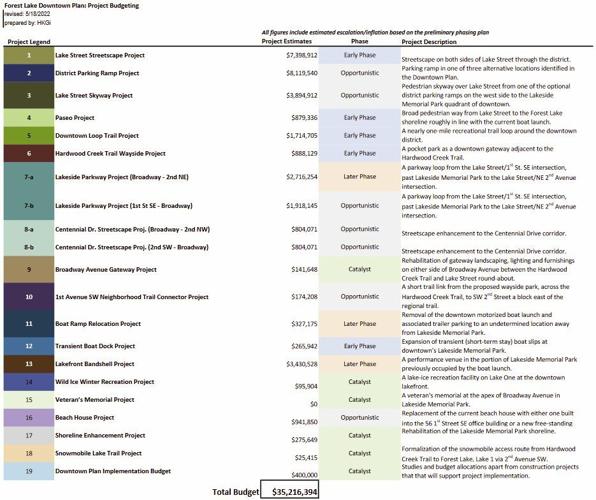 New plans for a revitalized downtown include the possibility of relocating the boat launch at Lakeside Memorial Park to ease parking woes.

A little more than a year since its inception, the downtown committee is preparing to finalize a downtown plan, what it says is a vision for the future of the historical center of the city. The planning began in early 2021, and shortly after the city hired Minneapolis-based HKGi to develop a plan to revitalize the area.

One of the final iterations of the plan was presented by Bruce Chamberlain, an urban strategist and designer for HKGi, to the downtown committee during a joint workshop with the EDA and City Council last Monday, May 16. That plan — modified with some changes and priorities offered by the council and committee — will be presented to the public during an open house on Thursday, June 2, from 7 to 8:30 p.m.  at the city center. It will also be presented online at investinforestlake.com/downtown-planning.

The plan — which, if every project is to come to completion — would total roughly $35 million, and would likely take at least a decade or more to come to fruition, and aims to attract area residents and businesses to the center of the city. It focuses efforts to revitalize downtown in three main types of projects: pedestrian facilities, parking and streetscapes, and recreation.

Given the feedback from previous engagement sessions on pedestrian facilities in downtown, particularly the crossing of Lake Street at the roundabout, much of the planned design of downtown focused on a pedestrian loop called the downtown trail loop project. It takes Hardwood Creek Trail to the west and creates a horseshoe stemming from First Avenue North and Second Avenue South, and would create a walking loop around downtown. That project, said Chamberlain, would be best to link to an aimed redevelopment of Loan Oak Grill and the block extending south to the old bank.

The reworking of parking facilities, including possibly adding a parking structure and skyway on the west side of Lake Street, also poses a complicated issue for the council, as it carries a hefty price tag and would likely be tied to private redevelopment projects downtown.

“This is a priority, I think. Trails, that’s really what’s going to drive this thing,” council member Sam Husnick said.

Recognizing the importance of connecting residential neighborhoods to the Hardwood Creek Trail and the downtown loop, HKGi suggested creating a short trail connection at First Avenue SW, but that would require an easement or a purchase of property by the city.

What continues to be a complicated topic for the council and committee is how to grow the currently-limited parking in downtown, specifically near Lakeside Memorial Park. Chamberlain proposed three possibilities for parking, all of which would provide 150 more spaces to the area, what he says is less than what is typically recommended, but would be enough for a start with the possibility of expanding or adding more later.

The downtown district parking ramp would come at a cost of $6.7 million. If the ramp is to go on the west side of Lake Street, Chamberlain also recommended pedestrian walkways across Lake Street to the park, one of which is a separate proposal for a skyway – known as the “passeo project,” which carries an estimated $750,000 price tag.

“Even though it is a nice feature downtown and brings people to town, it is really a distraction to all that is happening in that space. Relocating the launch somewhere really close to downtown, but not in the core, would have a really significant impact, both the quality and opportunities of retailing, as well as circulation and parking issues that you continually have,” he said.

But the feasibility and expense, which comes at a price tag of $240,000 for the removal of the boat ramp and restoration of the site, is what has both the committee and the council considering their options. According to Assistant City Administrator Dan Undem, the ramp that is currently there was largely funded by the Minnesota Department of Natural Resources, but that didn’t include land acquisition, as it was part of the redesign and development of Lakeside Memorial Park. He said it’s hard to tell what kind of appetite the DNR would have in any relocation efforts of the ramp, and committee member Blake Roberts added that doesn’t factor in the cost to the city to purchase any land for a replacement location.

Any relocation of the ramp would likely not take place for at least a decade, but many other pieces of the downtown plan hinge on where the boat launch is placed.

“It has a rippling effect on other things,” said council member Kathy Bystrom.

The council is considering an option to pay for a location study which would help answer the question of what the costs might be associated with relocating it and where other location options might be.

A “Lakeside Parkway Project” would cost $4.2 million, and would restructure the parking at Lakeside Memorial Park by creating a horseshoe-type street that would join at Lake Street at First Avenue South and Second Avenue North. This would likely be in conjunction with private redevelopment of the former Vannelli’s building and surrounding area.

“This one is also challenging, because it’s significantly impacted both by the Gaughn block to the south but potentially whatever we’re going to do with the boat launch, so it’s literally in the middle,” Mayor Mara Bain said.

Centennial Drive is on the docket to get an upgrade in the downtown corridor, and opens up the opportunity for a complete redesign of the street and what parking options could look like for businesses that are adjacent to it, but the council has some hurdles as it would need to expand the size of the road to accomplish the enhancements HKGi proposed.

A new “gateway” project to “spruce up” Broadway Avenue around downtown comes at an estimated price tag of $130,000. Husnick and Bain said they’d consider this a foundational “catalyst” project.

Committee member Susan Young added, “I think you could find some partners on this, too.”

Non-motorized boaters are likely to see the addition of some shoreline reconstruction for launching, which would allow kayakers, canoers, and paddleboarders to launch their watercrafts off of what is now the northern tip of the beach at Lakeside Memorial Park. The committee and council said this was a project that would be near the top, as the cost is feasible at $50,000 and would be a “catalyst” for future growth of downtown.

Another project marked as a catalyst option is the addition of “fingers” to the current dock at Lakeside Memorial Park so boaters can park and visit downtown.

“That’s low-hanging fruit. That’s something we talked about is parking for boats downtown. Whether it’s where the existing one is or where it’s moved, it’s the same dock sections,” committee member Jerry Grundtner, who championed the idea in previous meetings, said.

Other smaller projects that could see early implementation are two winter-time recreational amenities: the creation of a wintertime rink/oval for activities on the ice, and clarifying and formalizing a snowmobile access route from downtown to Hardwood Creek Trail.

Increasing in cost from there is the relocation of the beach house, which was previously noted as poorly placed as it restricts views to the lake.

“It’s probably past its useful life in many ways and could stand to be replaced,” Chamberlain said.

Two options were offered for the relocation of the beach house, which, due to the addition of a focus on lake winter recreation, would turn into a year-round facility. The first option is to create an arrangement by building it into the building closest to the beach, owned by Gaughn. The second is to build a new beach house/warming house in the current beach playground area, while moving the playground closer to the swings.

“The current spot for the playground is a little isolated. It has a great proximity to the beach – that’s the advantage of it – but from a visual standpoint, it’s a little tucked back. This option would make it a central component of what’s going on in the park,” Chamberlain said.

The design for the new park also included the possibility of a new bandshell where the current boat launch sits. The project seemed to be low-priority for the council and the committee for several reasons, the biggest of which is it would hinge on what they decide to do about the boat launch, but also included things like cost. Bain said it’s a project that could be a good catalyst for drawing people to downtown, but she added, “It’s an enhancement of something we already have.”

After the public open house on Thursday, June 2, the website will be open for comments until Monday, June 6, after which HKGi will compile information and opinions and update the downtown plan. Each city group, such as the Parks, Lakes and Trails Commission and the Economic Development Authority, and of course the downtown committee, will review it for approval. Once each group has had a chance to review it and make any changes they feel necessary, it will be brought to council for final approval. This final approval does not earmark any dollars (though Bain added there were “minor dollars” in the EDA budget for early and small projects), nor does it guarantee any projects will come to completion, but it will act as a guide for what the council decides to pursue to redevelop downtown.