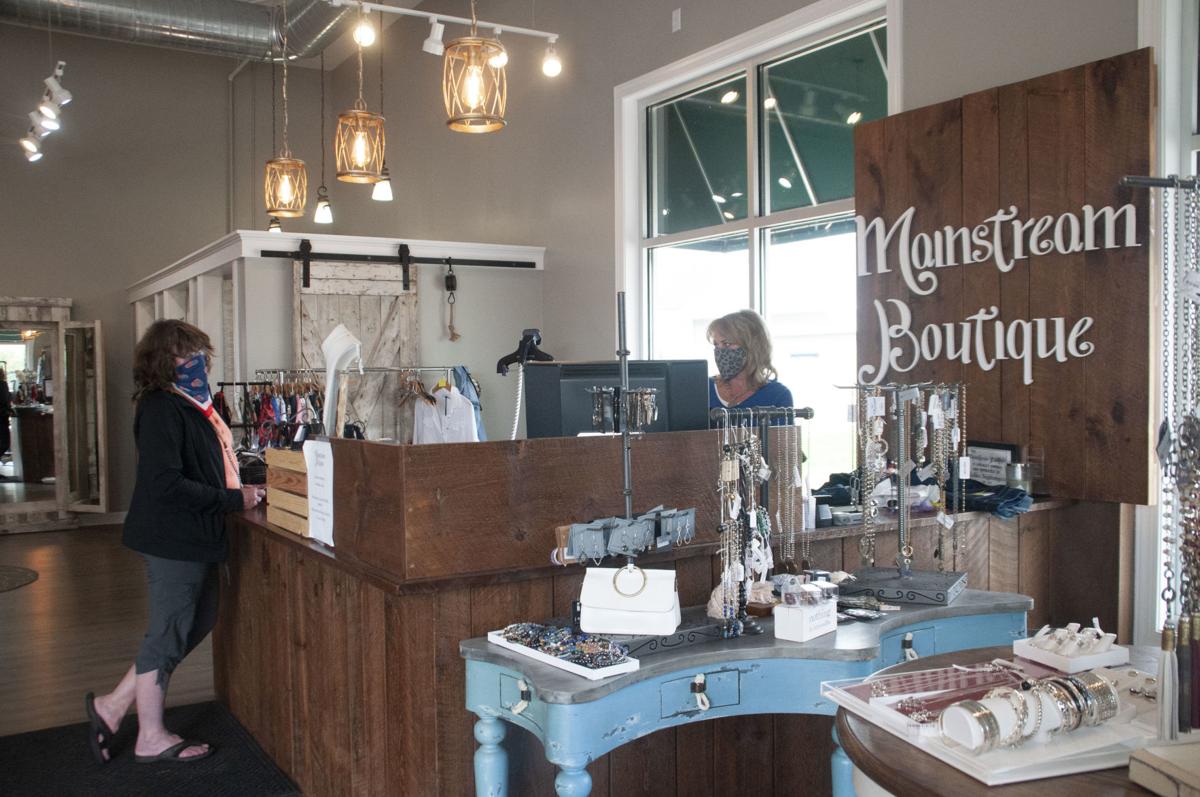 Kellee Nightengale, owner of Mainstream Boutique, helps a customer purchase clothing on Tuesday, May 19. Gov. Tim Walz announced the reopening of public facing retail on Wednesday, May 13, as long as retail shops open at less than 50% capacity. Nightengale had a plan in place before the announcement, and was set to go once the Stay at Home order was lifted and the new Stay Safe order was announced. Photo by Hannah Davis 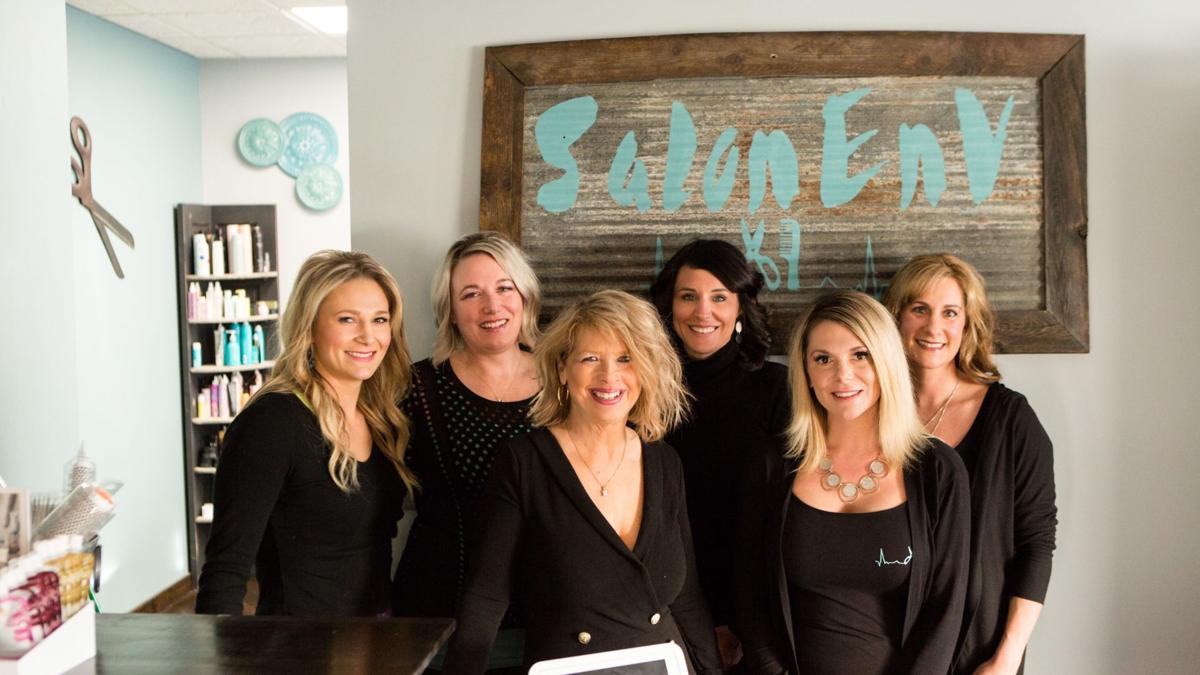 Shannon Shurb, second from left, is anxiously awaiting the day she can open the doors to her salon, again. Photo submitted 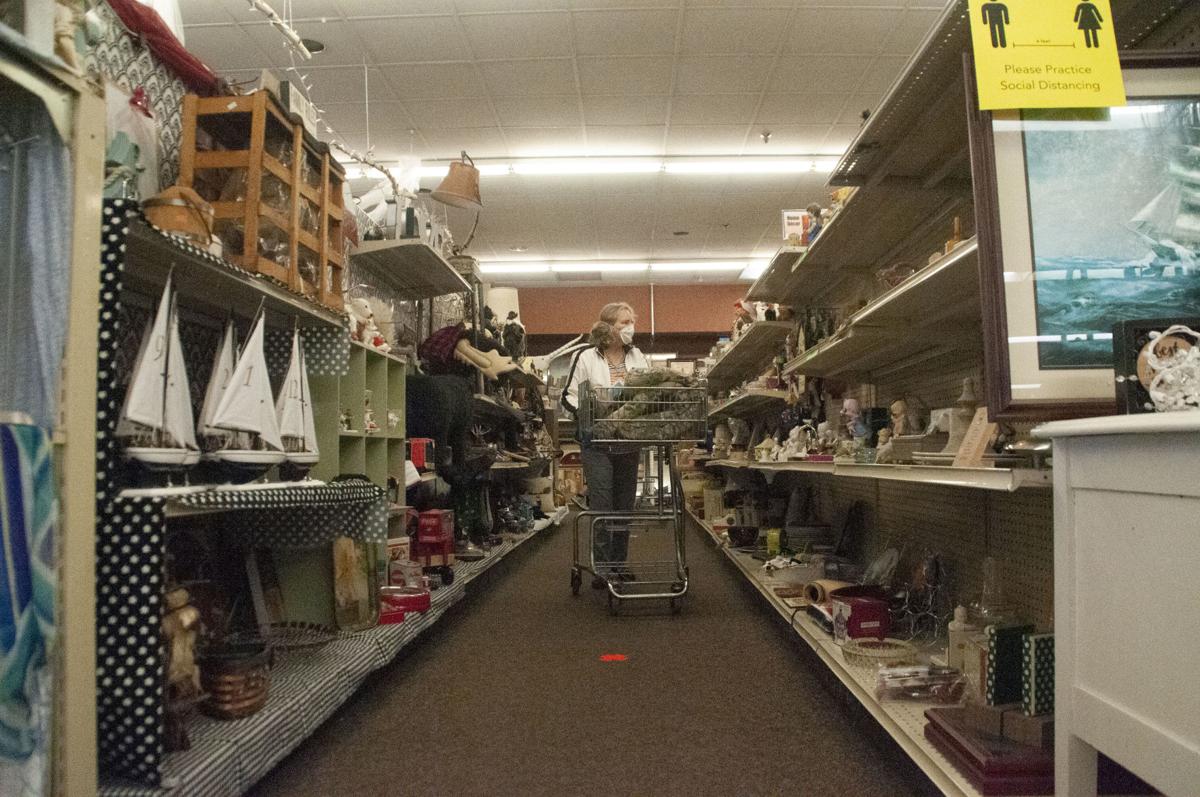 A shopper walks through Family Pathways thrift shop in Forest Lake on Monday, May 18. Family Pathways is requiring all customers and employees to wear masks. Photo by Hannah Davis

Kellee Nightengale, owner of Mainstream Boutique, helps a customer purchase clothing on Tuesday, May 19. Gov. Tim Walz announced the reopening of public facing retail on Wednesday, May 13, as long as retail shops open at less than 50% capacity. Nightengale had a plan in place before the announcement, and was set to go once the Stay at Home order was lifted and the new Stay Safe order was announced. Photo by Hannah Davis

Shannon Shurb, second from left, is anxiously awaiting the day she can open the doors to her salon, again. Photo submitted

A shopper walks through Family Pathways thrift shop in Forest Lake on Monday, May 18. Family Pathways is requiring all customers and employees to wear masks. Photo by Hannah Davis

Kellee Nightengale, owner of Mainstream Boutique in Forest Lake, has been waiting since March 18 to reopen her doors. So when Gov. Tim Walz announced Wednesday, May 13, that more nonessential businesses, including retail, could open beginning Monday, May 18, she was ready.

“I’m comfortable with opening because I know that we have a plan in place that’s going to keep us safe and our customers safe,” Nightengale said. “I know it’s going to take time to get back to normal, but it does feel good to be open.”

But for some store owners, they’re a little more concerned. When Gretchen Mosner, owner of Shop Nyna, a woman’s clothing store in Forest Lake, heard the news that businesses could reopen May 18, she struggled with how she was going to handle the situation. She decided on allowing shopping by appointment only until May 28, when she’ll reopen her doors to regular foot-traffic again.

“I’m working on getting the right cleaning supplies that are required,” Mosner said. “That’s another reason why I’m not rushing to reopen the first week. I want to make sure that I’m doing it right.”

But, like many small businesses, she’s concerned about the financial implications of the pandemic, as well.

“I’m a little concerned if people are going to be nervous about shopping and worrying about whether the economy is going to tank, which could affect my business. That’s a little scary,” Mosner said. Still, she said she “can’t wait for things to get going. ”

Family Pathways, a nonprofit thrift shop, opened their doors to the public on Monday. Director of social enterprise Chris Lenzen said that opening comes with a mixed bag of emotions for him and the employees.

“We are excited, anxious, nervous and uncertain as we all adapt to a new normal for a while,” Lenzen said, adding they are “so happy” to reopen their stores for thrifters.

The act of shopping has drastically changed for the world since the pandemic began, with changes in big-box stores, like making aisles one-way traffic, and requiring age restrictions and masks upon entering. While the governor’s order required stores to be at no more than a 50% occupancy to keep with social distancing practices, he allowed shops to determine how to implement other safety measures.

Nightengale said that Mainstream Boutique will have a hand-sanitizing station set up so people can sanitize their hands before they begin shopping, and while she is not requiring her customers to wear a mask, she is encouraging customers to do so. All employees will be wearing masks and will be sanitizing the store and items in the store.

She added that people can make personal appointments to make sure they can get into the store at a designated time and said if people prefer to shop at home, they will continue to offer curbside pickup.

Mosner said that she’ll be sanitizing things, as well.

Family Pathways, which operates nine thrift stores in the region, including one in Forest Lake and another in Wyoming, has made policy changes to how people can donate as well as shop.

“Until we can get a better idea of what the new normal for customer traffic in our stores will be, we will have an employee at our front doors greeting customers and monitoring the number of customers entering and leaving the store,” Lenzen said. In addition, many aisles will be marked with tape indicating a six foot spread to encourage social distancing, and customers and employees are required to wear masks.

“We understand that this is not the most popular policy to put into place, but our employees feel much safer with this temporary policy in place, and it will also help to prevent the spread of the virus among our customers,” Lenzen said.

Donors will also now have to schedule a drop-off time.

“This does create an inconvenience for our donors. However, these limitations are necessary due to capacity restraints in order to effectively quarantine our donations for 72 hours before being processed,” Lenzen added.

While the governor’s new Stay Safe order did lift restrictions for many businesses to open, he did not lift the ban on in-dining options for bars and restaurants, and has kept the ban in place on the opening of salons, tattoo parlors and other services that require close human contact to operate. Many of those business owners say they’re ready. The governor indicated in a press conference following his announcement last week that he has directed his cabinet to develop a plan so those businesses can open beginning June 1, though that date isn’t set, yet.

Salon EnV owner Shannon Shurb had hoped to open her doors this Monday, and said she’s already developed a plan for reopening.

“The plan is keeping 10 people or less in the salon, stylists working every other station and not to double book our clients,” Shurb said. “There will be no one in the waiting room. Customers will have to wait outside or sit in their cars until they get a text message when they can come into the salon.”

However, Shurb said that she’s still waiting for the guidelines set forth by the state’s Department of Cosmetology, which she expects to receive soon.

“We are really excited to reopen,” Shurb said. “I wish it would have happened sooner.”