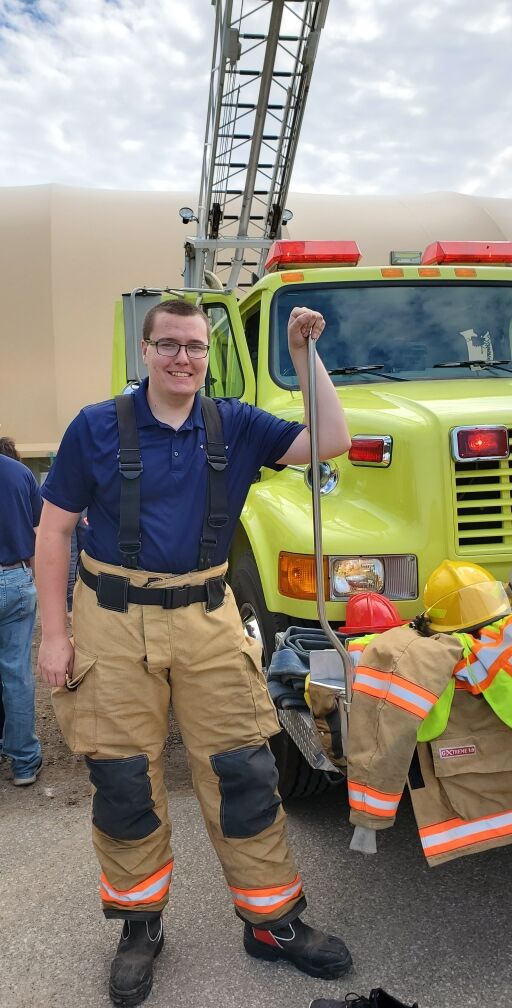 Brothers Anthony (pictured) and Kenny Hyrkas work as volunteer firefighters for the Wyoming Fire Department. During the pandemic they have not been able to use their EMT training, since their department has not been answering medical calls. 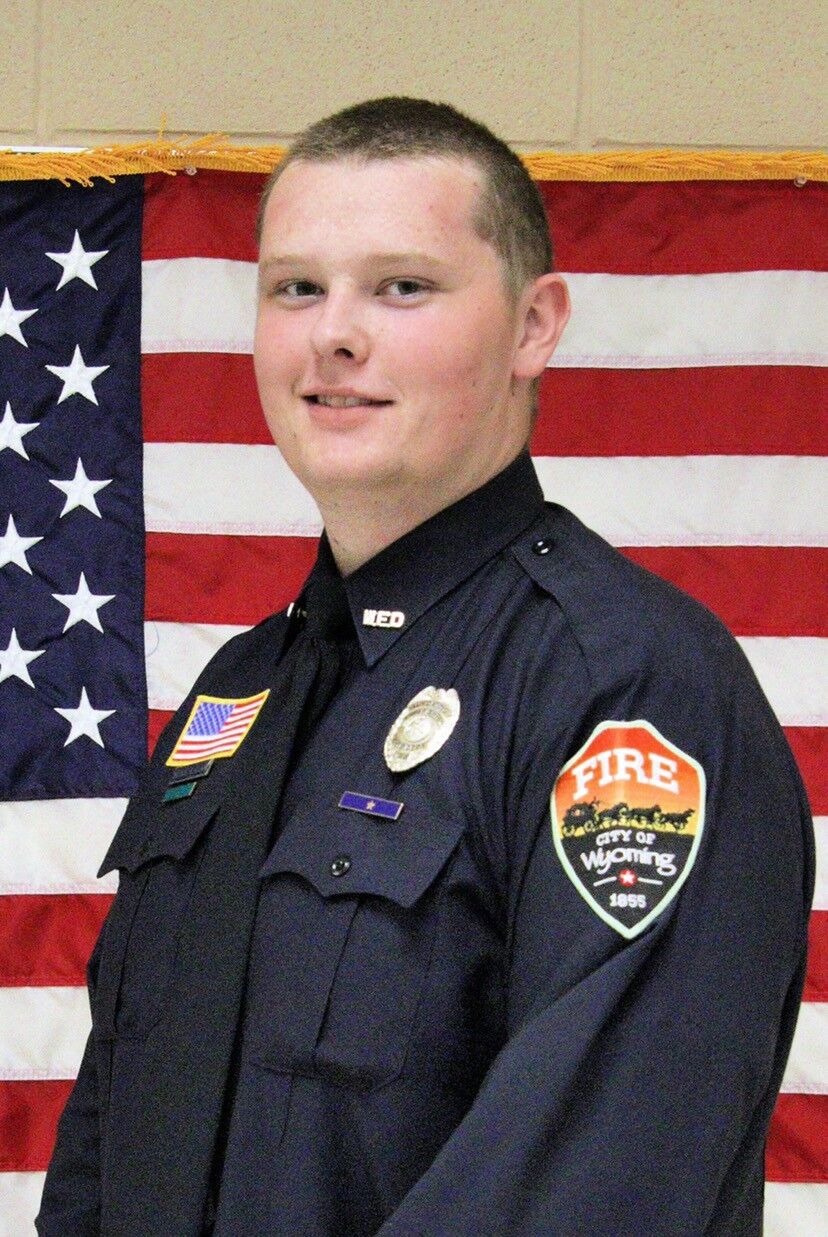 Brothers Anthony and Kenny Hyrkas (pictured) work as volunteer firefighters for the Wyoming Fire Department. During the pandemic they have not been able to use their EMT training, since their department has not been answering medical calls.

Brothers Anthony (pictured) and Kenny Hyrkas work as volunteer firefighters for the Wyoming Fire Department. During the pandemic they have not been able to use their EMT training, since their department has not been answering medical calls.

Brothers Anthony and Kenny Hyrkas (pictured) work as volunteer firefighters for the Wyoming Fire Department. During the pandemic they have not been able to use their EMT training, since their department has not been answering medical calls.

How first responders have had to adapt to the pandemic

After the first state shutdown due to the coronavirus in spring of 2020, Capt. Greg Weiss of the Forest Lake Police Department can recall driving northbound down Broadway coming off of Lake Street on a Friday.

While on a normal Friday afternoon Weiss, like many Forest Lake area residents, would be sitting with other cars waiting to go through the roundabout or a stoplight, this day the streets were empty.

“That was the first weirdest thing where I was like, ‘holy cow,’” Weiss said. “That brought me back to 9/11 when I was working the street on overnights, and for that week, (or) period of time, there was no traffic — people were staying home, they were with their families. It was very eerie and very similar to that.”

For Forest Lake Fire Chief Alan Newman, there was no difference in what he saw.

“I experienced the same thing,” Newman said. “That was probably the strangest occurrence that I saw that was specific to the city of Forest Lake.”

Twelve months ago, if you had an emergency, the dispatcher on the other end of the line would ask you several questions about your situation.

Now along with those questions come a few new ones.

“Have you tested positive for COVID?”

“Have you had any COVID symptoms?”

“Have you been in contact with anyone who has tested positive for COVID?”

This has become the new normal when first responders are assisting someone with an emergency.

Weiss has served with the Forest Lake Police Department for the last 20-plus years, and during his time of service, he had never experienced anything like the pandemic. Despite this, the mission never changed.

“One thing I will say throughout the entire pandemic is that our officers did not lose focus of their mission to protect the citizens of Forest Lake,” Weiss said. “Never once did we not answer a call.”

While first responders have answered every call, even when the number of calls steadily decreased at the beginning of the pandemic, they did have to change their everyday protocols. If they could help people over the phone or talk through a barrier, they did that instead of meeting face to face.

This was new to everyone a year ago and first responders were doing everything they could to learn, but continue to do their jobs serving the community.

“Early on it was a learning type of phase,” Weiss said. “Not really sure what we are dealing with, 99.9% of my time was not only with the police department but fire, public works and also the city staff to ensure that we did everything we could do to stay healthy.”

With everything happening, Weiss transitioned from being a police captain to a city emergency manager full time. This lasted from last March through the summer. It has only been more recently, with call loads returning, that Weiss has seen a somewhat normal workload — whatever that means in the pandemic.

Police officers are not the only first responders to have seen a major change in how they serve the community. Brothers Anthony and Kenny Hyrkas, graduates of Forest Lake Area High School, currently serve as volunteer firefighters with the Wyoming Fire Department.

While they are both trained and certified as EMTs, they are no longer getting to put their knowledge to use as they would have before the pandemic.

With Wyoming Fire not being able to transport people, at the start of the pandemic and until just recently, they were not able to respond to any medical calls.

“It sucked that we can’t get out there and do our job, but we understand it,” Anthony said. “That was kind of the initial thing; now that we are starting to get more PPE, N95s and we are using new jumpsuits that we got, we are going back to more medicals than we previously have, now that we know how to mitigate the risks with COVID.”

While they may not be responding to as many medical calls, they are still responding to other calls, and with that comes the need to remain safe and not be exposed to the coronavirus.

When a space heater caught fire in a house, the dispatcher informed Kenny and his fellow firefighters that the person who called it in had tested positive for COVID-19 and was quarantining.

Kenny remembers that everyone did their best to distance themselves, remain masked up, while also fighting the fire.

One protocol change that all first responders in the Forest Lake area have experienced is the way that training is conducted.

One of the reasons Newman saw this as the biggest change was due to the nature of the training. For both police and firefighters, a lot of the training they are required to do is hands-on. When you are doing that type of training on Zoom, it’s hard to adjust.

It wasn’t until just recently that Kenny and Anthony have said that they have begun to do in-person training once again.

“We just started to go back to in-person trainings, too, with the guidelines and stuff,” Anthony said. “You can’t do hands-on stuff online with all the new guys, and even the experienced guys, you need that hands-on stuff to keep your skills on par.”

Training wasn’t the only change that was made to everyday protocol. Squad cars now not only go through a thorough cleaning process, but also remain unused for a certain amount of time in order to make sure they are safe after transporting a COVID-19 positive person.

According to Weiss, they have also worked to help over the phone when helping in-person is not fully needed. Weiss knows there are times when officers need to be officers, but safety is also at the front of his mind.

“There are still instances that we still have to be police officers,” Weiss said. “We’re not going to sit outside when there is something going on inside like a medical emergency or a violent confrontation — you know we still have a job to do — but especially early on, we took precautions to do what we could over the phone.”

At the end of the day, the changes to protocol, how to respond to calls, and even training has not changed how first responders look at their jobs.

“I love doing it and it’s not something I am ever going to give up; it’s just kind of our duty to give back to our community,” Anthony said.