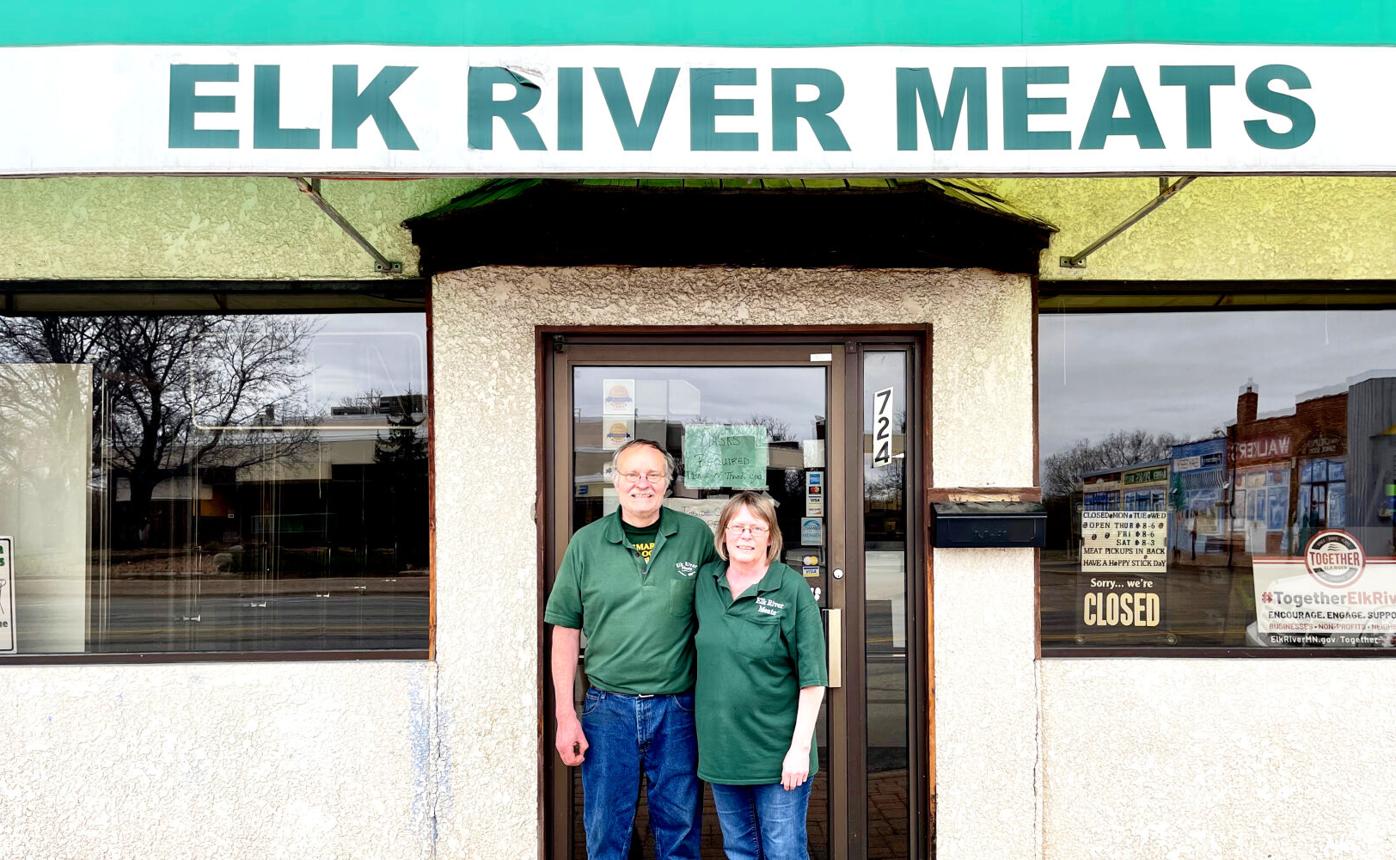 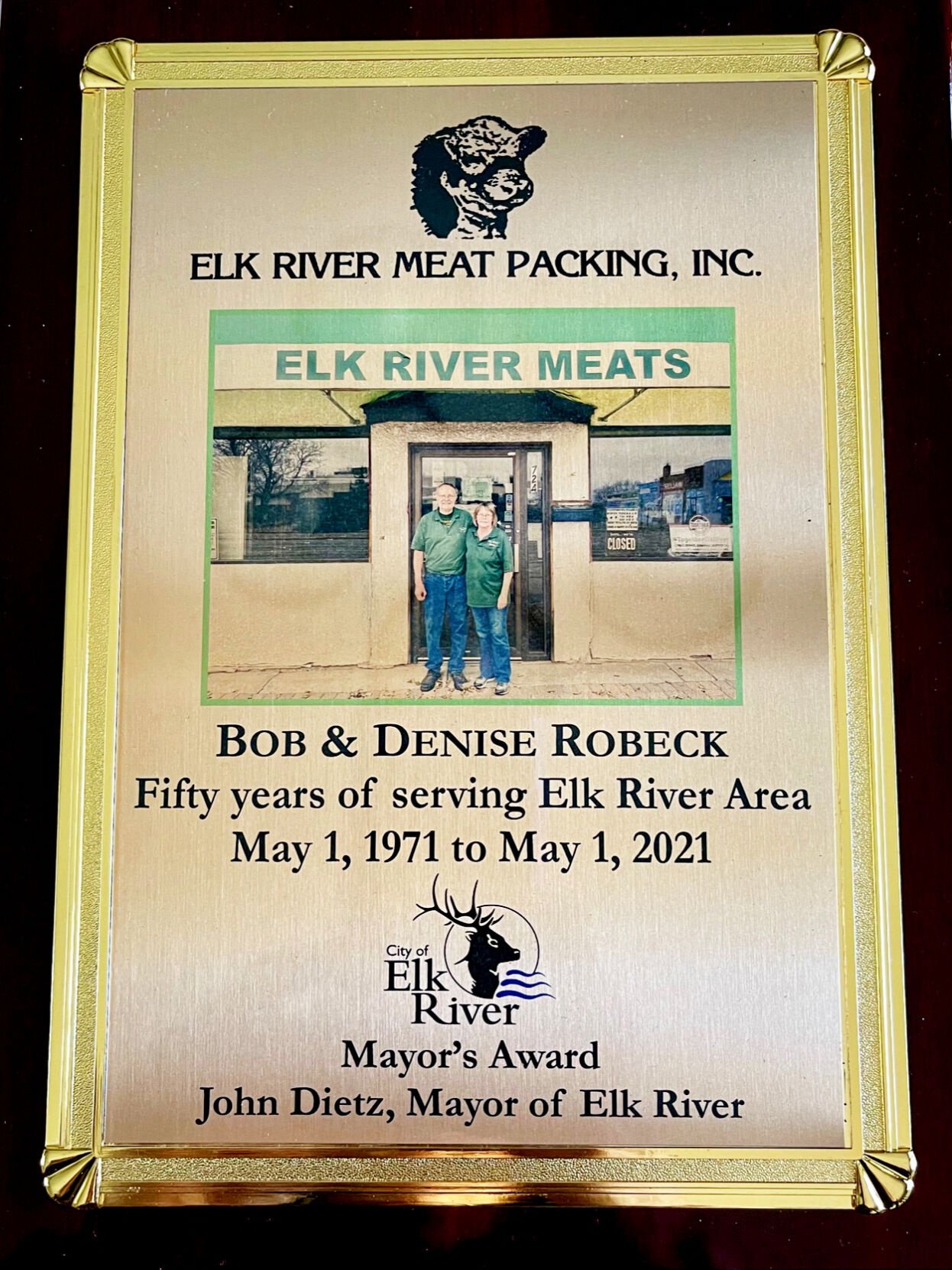 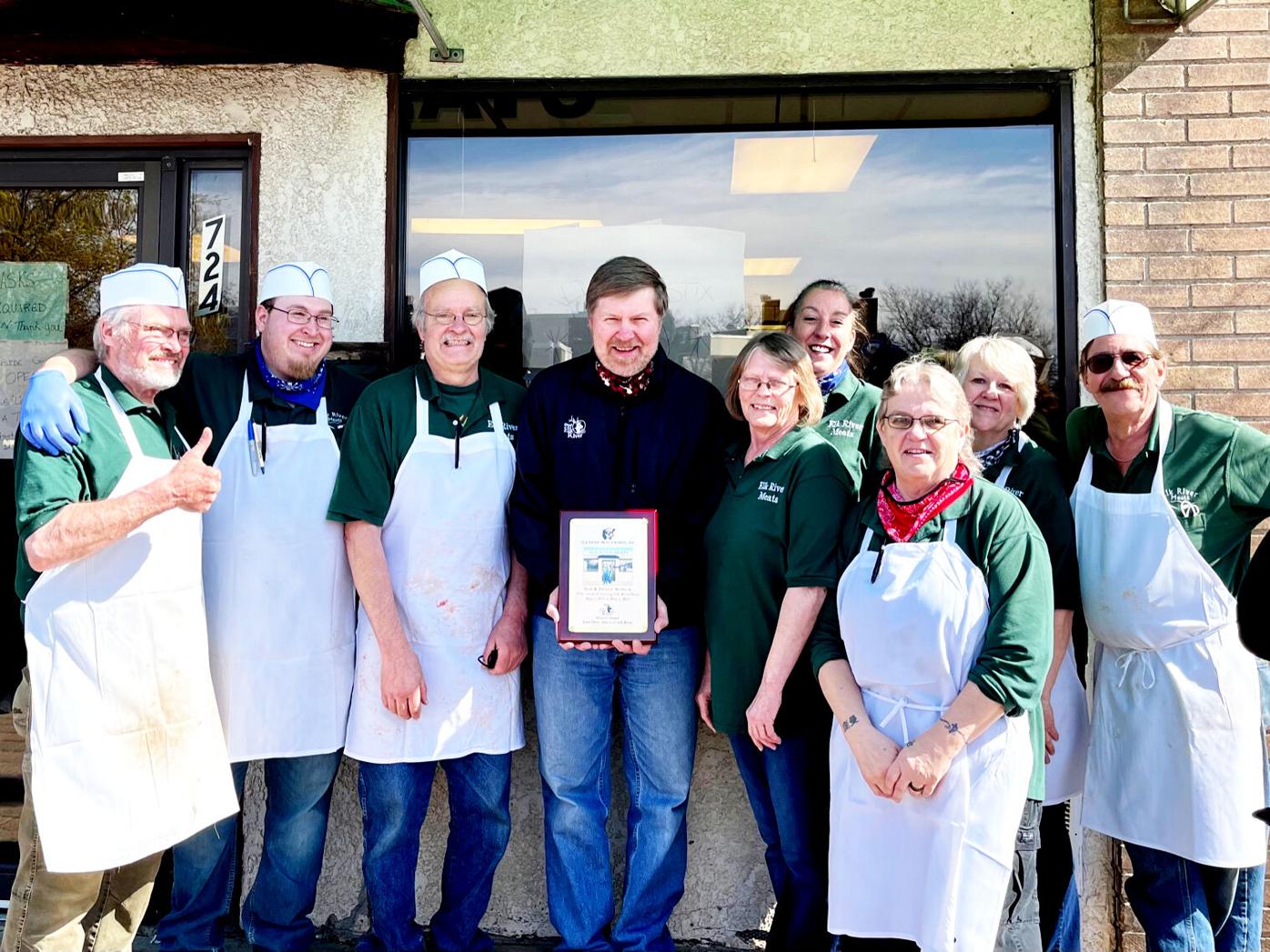 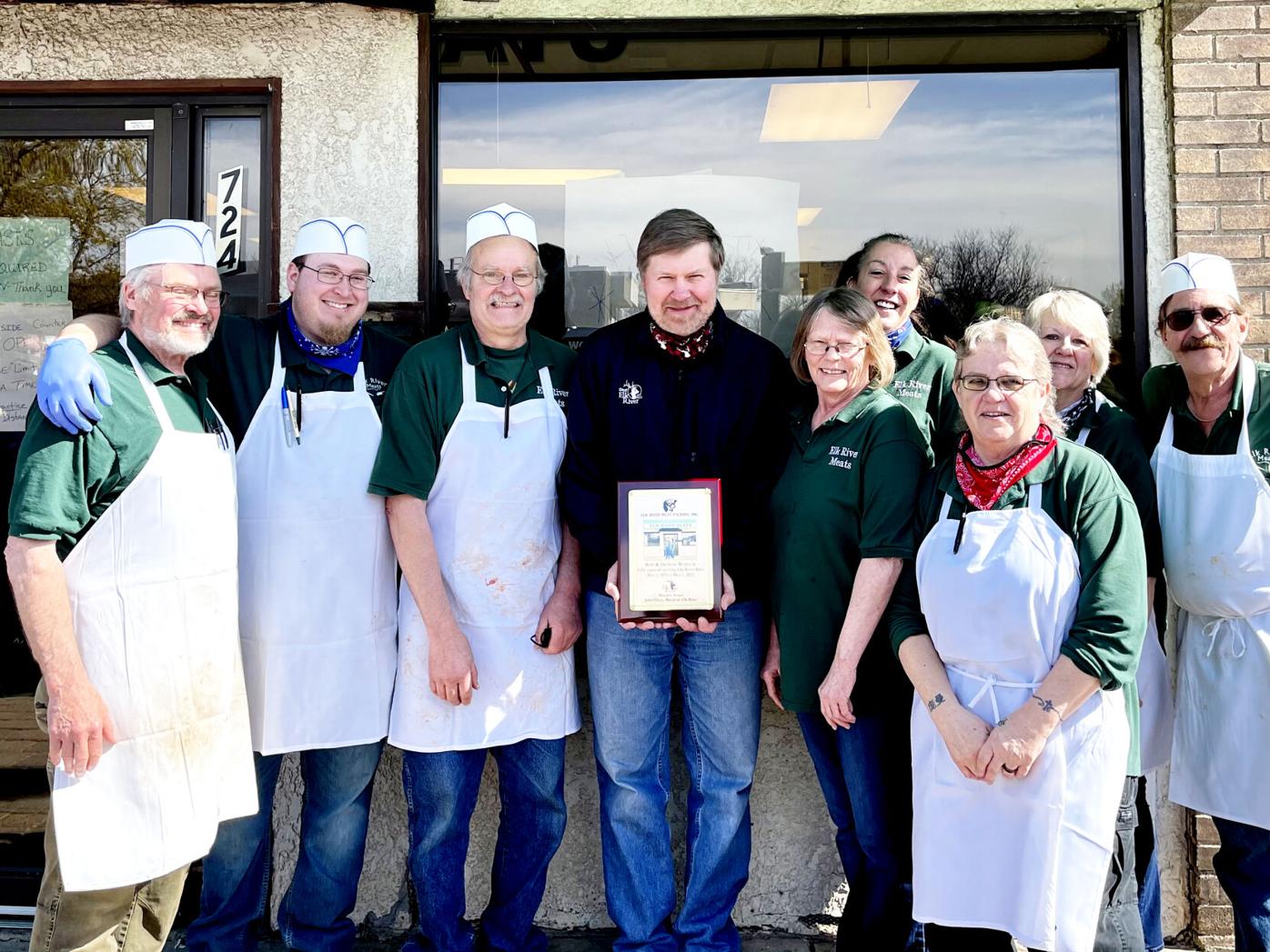 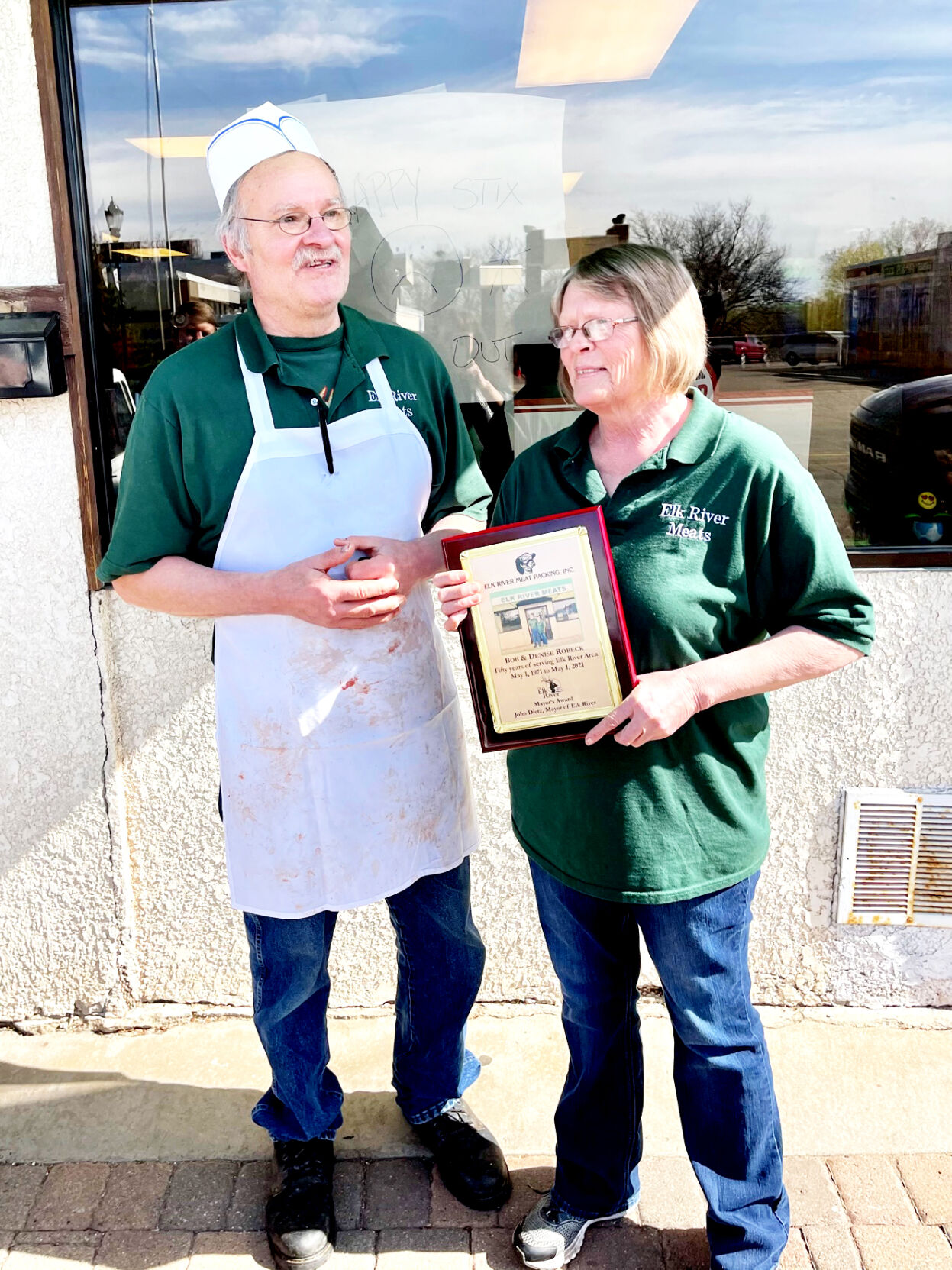 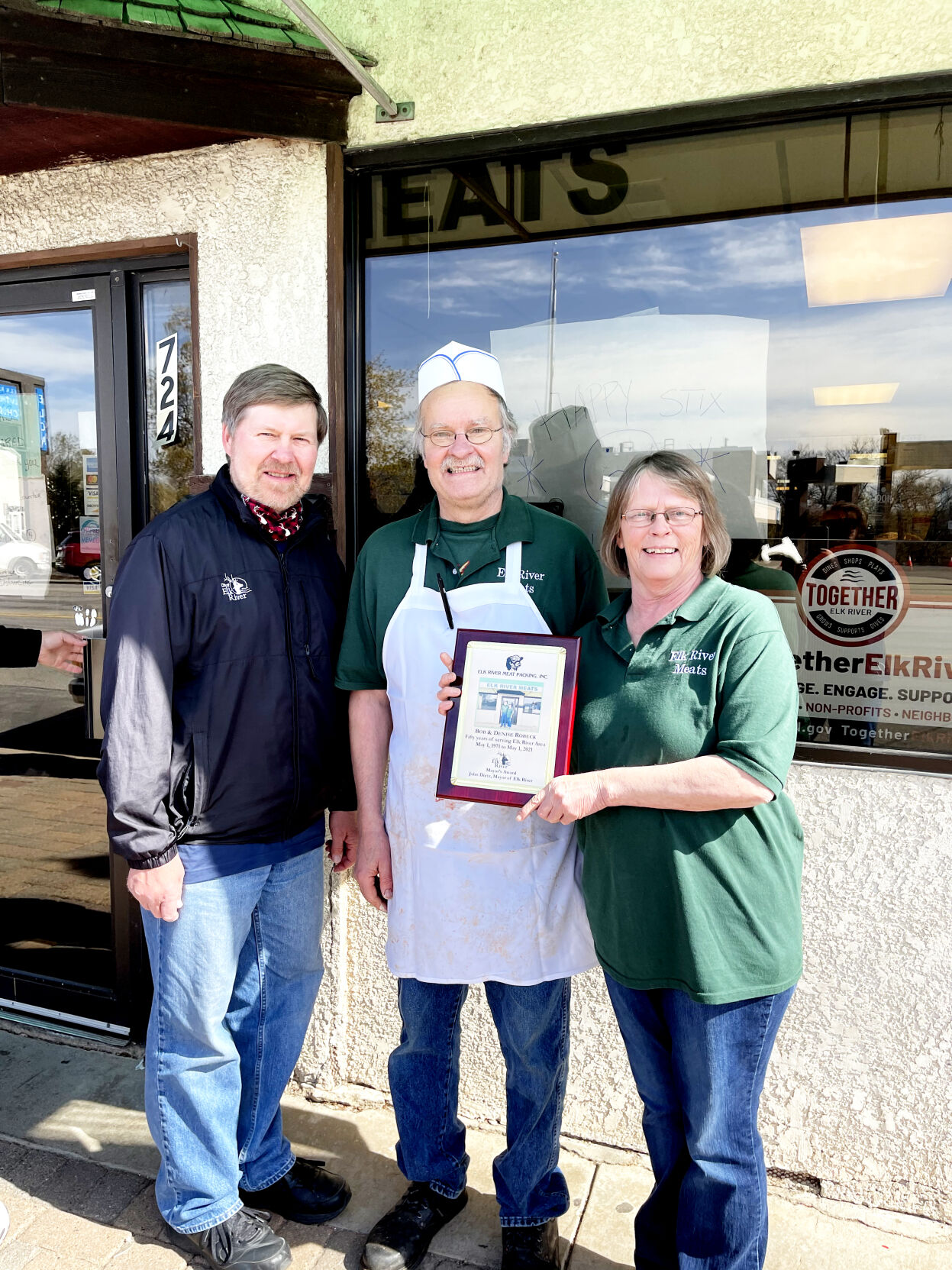 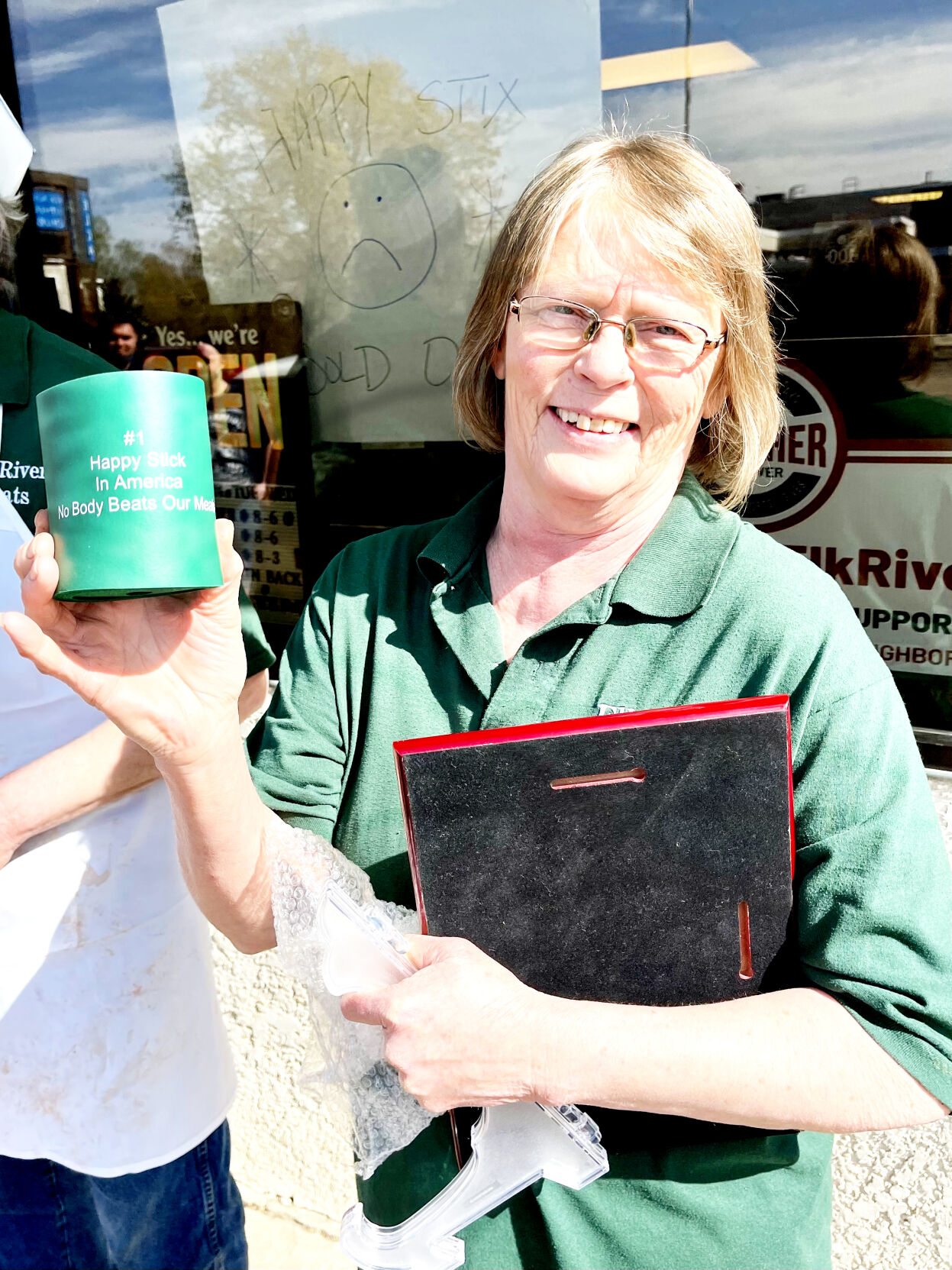 Elk River Meats closed its doors for the last day of business on May 1, but the community would not let Bob and Denise Robeck go quietly into the sunset.

Elk River Mayor John Dietz presented Bob and Denise Robeck with the Mayor’s Award on Saturday, May 1, which marked the meat market’s 50th anniversary. He and staff gathered outside the business under the green and white awning to exchange kind words, take photos and have a chance to wish the couple well in their retirement.

Dietz said 50 years was far too significant to not do something special for the Robecks.

“Not many businesses in Elk River last 50 years,” Dietz said. “They did it the old-fashioned way, giving their customers what they wanted. Also their customer service was second to none. They proved you could be successful doing things the old way.”

Elk River Meats used to compete with Dietz’s father’s grocery store Fairway Foods that eventually became SuperValu, but it was a friendly competition.

The Robeck family bought the building when John Dietz was in college and George Dietz was running a successful grocery stores.

“My dad had a soft spot for meat markets because my dad’s dad (my grandfather) had a meat market in Carver for many years,” the mayor said.

Dietz had one of the first 24-hour grocery stores, but sold both his Elk River and Rogers his locations in 1980. The number of grocery stores in the Elk River area has mushroomed and larger retailers like Walmart and Target have even added grocery store components. Elk River Meats still did a robust business.

“The Robecks are very humble, hard-working people who never looked to be in the limelight,” Dietz said. “I am very proud of what they have done for our community.”

The community has been mourning the loss of the downtown Elk River institution ever since it was announced. Bob and Denise Robeck are retiring with visions of projects and some traveling. They have earned it, and the community has flooded the meat market operators with well wishes, thanks and a profound sadness to see a downtown landmark come to an end.

Cheryl Ford, who grew up in Elk River, remembers her first trip to Elk River Meats decades ago. Her father asked the then 16-year-old who had just gotten her license to make the milelong trip into town with the family’s 1973 Ford Galaxy to make some purchases.

“Our family has been buying meat from them for four generations,” Ford said.

“We do buy quite a bit,” she said. “Some weeks I have bought almost all of my groceries there, mostly the specialty things that they have offered. Italian sausage is one of our favorites. They hold the secret ingredient to many of my recipes by the spices they put in their meats.”

The meat market offered far more than meat. It also was known for cheese, pies and other treats, including treats for family dogs. Photos of many of the satisfied pooches hung in a board inside the business.

The business started out as the local butcher for all the area cattle farmers. As that business shrank, the market still managed to flourish.

Ford once gifted Elmer and Pat Robeck, the original owners who first had the meat market before passing it on their sons Bob and Ron Robeck, with a Ball jar of pork and beans with a small stuffed pig and dried beans. The Robecks cherished it, and it still sat out on display  when Ford visited the meat market for the last time before it closed.

Ford also brought Bob and Denise some of her sausage, biscuits and gravy to try one time.

“I told them if you don’t like it, it’s not my fault,” she said. “That is my secret recipe everyone asks for. Well, it’s all about the sausage.”

Ford found out in April the business was closing.

“I was sad,” she said. “Everybody knows that. I have gotten several sympathy cards in the mail. People from work are reaching out with different emails. It was very sad news, but I am very happy for them.”

In addition to the secrets to her recipes, Ford said she will never forget the whole crew.

“They’re like family,” she said. “Grandkids and everything. They’re a big part of the success.

“Bob and Ronny would always ask about our parents and our kids and grandkids, and we would, in turn, ask the same thing. I think knowing all the families through the generations made it a huge impact.”

Bob, often a man of few words, told the Star News last month the customers have always been great.

The Elk River Housing and Redevelopment Authority recognized the Robecks, owners of Elk River Meats, for 50 years of making Elk River happy with all of their products, especially Happy Sticks.

The HRA proclaimed May 3, 2021, as Elk River Meats Day on May 3 at its regular monthly meeting.

The HRA is negotiating with Bob to buy the property from him.  An appraisal of the property is being done and a deal could be worked out soon.

There were some interested buyers in the meat market, but the Robecks and others have said city code issues that the Robecks were grandfathered in on would have made it difficult for another meat market to acquire the property.

“A new buyer would have had to spend thousands bringing everything up to today’s code,” Dietz said. “Also, I don’t think the building is in very good shape.”

One vestige of Elk River Meats could survive, however. Bob said he plans to work on patenting the Happy Sticks now that he has closed.