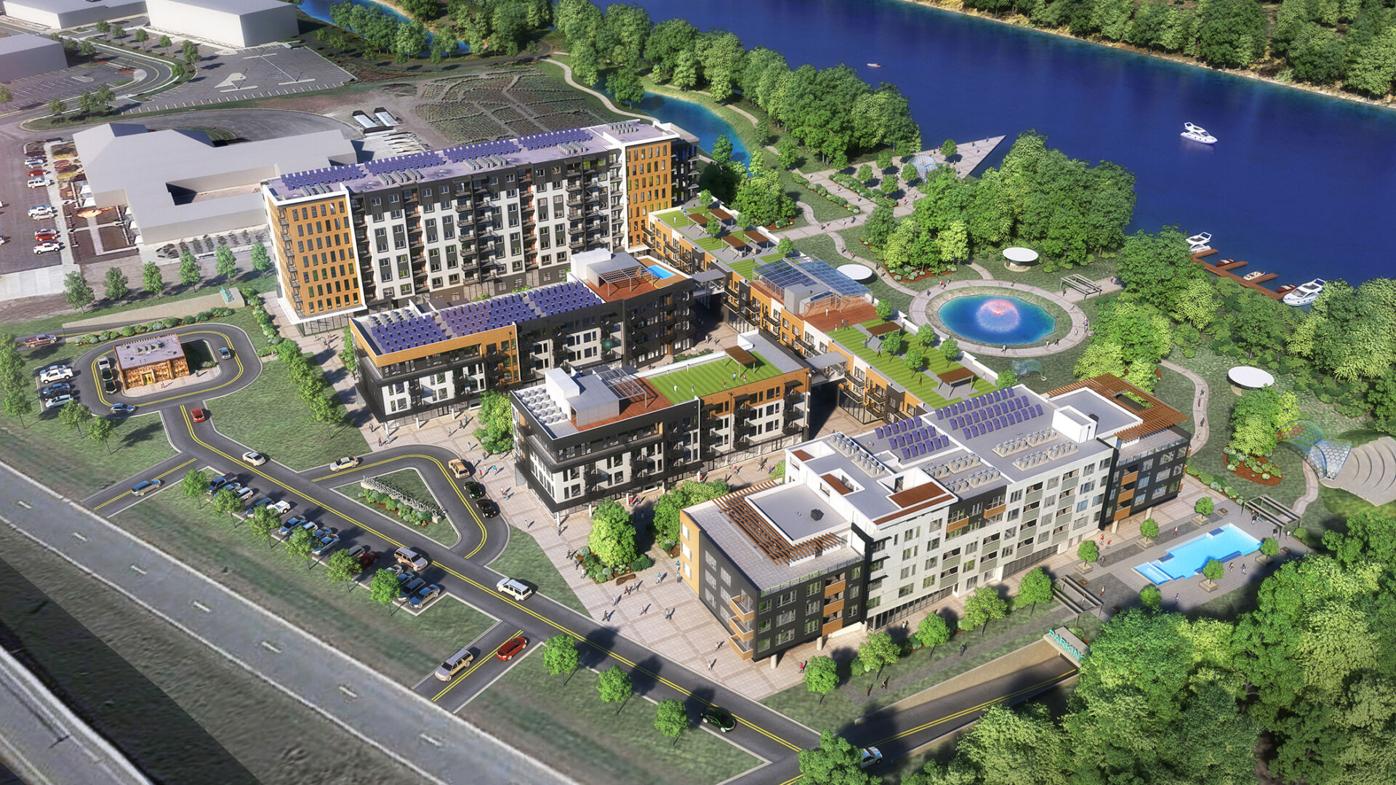 A proposal by Modern Construction of Minnesota calls for a mixed-use development overlooking the Mississippi River in Otsego. 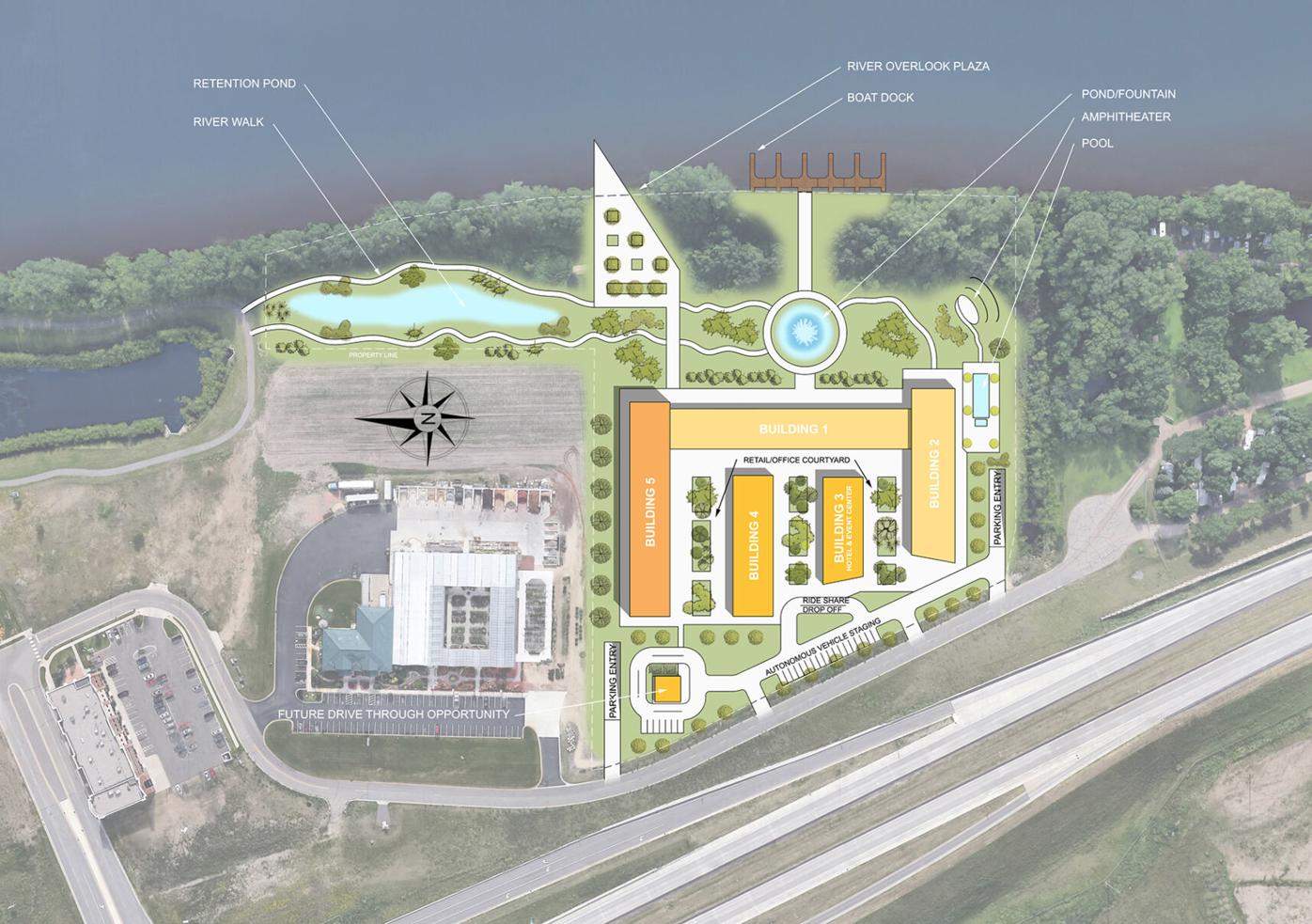 Modern Construction of Minnesota’s proposal for a site in Otsego.

A proposal by Modern Construction of Minnesota calls for a mixed-use development overlooking the Mississippi River in Otsego.

Modern Construction of Minnesota’s proposal for a site in Otsego.

Jesse Hartung of Modern Construction of Minnesota has taken his dreams and vision for a mixed-use development overlooking the Mississippi River across the Mighty Mississippi to the Waterfront West development in Otsego for consideration by city officials there.

Planning commissioners there heard it first on March 15, and the full Otsego City Council heard it on March 22. The visuals for the project scored high with both groups, but commissioners and council folks found lots of issues that led them to question the viability. Council members also expressed beliefs that they see the project as one that would need to be privately funded. They gave the Elk River-based developer the green light to investigate his concept proposal but made it clear they were not committing to anything.

Dan Licht, Otsego’s planner, said the March meetings were members’ chance to give feedback to the developer on acceptability on proposed land uses without making the developer invest in significant engineering costs that would be needed if they were going forward with an actual plan only to find out there was absolutely no interest.

“Any comments of council or planning commission are not binding,” Licht said.

It’s a different proposal than the one presented in Elk River, but it looks to accomplish many of Hartung’s goals to bring a signature project to the area and legacy project for him and his firm.

It’s more spread out than the proposal he pitched in Elk River, while working with a developer’s agreement with the neighboring community. Elk River officials, however, rejected a request to extend the agreement beyond 16 months, and Hartung withdrew his project.

The Elk River developer and his team formulated a new conceptual plan in the wake of that turn of events. He most recently presented a conceptual planned unit development on a 12.58 acres of land located east of Highway 101 and south of 90th Street/Wright County Road 39. It would be neighbors to 101 Market and be situated along the Mississippi River.

The property sits on two lots platted for commercial uses and an outlot that falls within the protections of the Wild and Scenic Mississippi River District.

Licht shared information on the concept proposal and artist illustrations of the vision behind it.

Hartung would like the development to be a signature piece for the community that would serve as a destination for the region.

“I hope to deliver a world-class public park open year-round with opportunities to enjoy the Mississippi River and park in the summer and bring some holiday fun to the area with sledding, hockey, snow shoeing, holiday light displays and much, much more in the winter,” he told the Star News in an email after the March 22 meeting. “This will be a signature project of mine displaying the latest technology, amenities, sustainable building practices on the market and delivering a high quality of life for the residents, the workers, retail and commercial tenants, and hotel guests. The project also includes an event center, public lounge area, many public rooftop terraces to enjoy the river views, and of course year-round free, safe, heated underground parking.”

The concept plan proposes the development of 380 multiple family dwelling units, a hotel with 40 units and 65,000 square feet of retail, office and service commercial uses on two lots platted for commercial use. It would also provide a spot for Hartung’s restaurant Tipsy Chicken to move from Elk River to Otsego. Hartung has also proposed an improved public open space and docks on the Mississippi River within an outlot. Underground parking is another significant component. The northwest corner of the development also includes a spot for a 6,000 square foot commercial building that could include a drive-thru operation.

The March 15 and March 22 meetings were public hearings for transparency’s sake, but only Hartung addressed the planning commission and council. The March 22 meeting has been video recorded and is available at https://bit.ly/2P90KGR.

Otsego council members called the proposal stunning and said the artist renderings were beautiful, but expressed concerns with the heft of the development that as it’s proposed would outstrip the area’s existing sewer and water capacity, present traffic issues along Quantrelle Avenue, especially where it intersects with 90th Street NE, and raise a number of concerns related to the low lands subject to water table and flood plain issues.

Council members also called into question the amount of underground parking and wondered how people would access all the amenities along the river. They also cast shadows over the proposed building heights that top out for one building at eight stories — twice as tall as the Holiday Inn, Guardian Angels Riverview Landing, Riverbend North Apartments, Village Apartments and Parkview Landing that are either completed or under construction. They seemed to agree that was a bit too much.

Otsego Mayor Jessica Stockamp and Council Members Tom Darkenwald both stated they did not see the project warranting tax increment financing or any tax abatements.

Council members and planning commission members expressed unanimous support for Modern Construction to proceed with further investigation and planning, provided that resolutions to its concerns would be needed.

During the meeting Hartung said he fully understood the challenges and said he likes a good challenge.

“I think they can all be worked out with a good engineering team working with city staff,” he said. “We’re willing to take that challenge. I ask for support to take the next step.”

Hartung told the Star News questions over the water table will be priority No. 1, and one thing that could derail the project.

Otsego officials noted how the water table has presented challenges to previous building projects, including Guardian Angel’s Riverview Landing and the road project that turned Highway 101 into a freeway there.

Ron Wagner, the city’s engineer, said creating parking along the river has been difficult to navigate with the nature of the ground being sandy and the high flood plain. Even parking at ground level has shown a need to be elevated.

The area along the river is also subject to environmental protections, which are put into place to preserve natural character. Licht said that means there are limitations on the extent of improvements that can be made, grading and vegetation removal.

Otsego’s comprehensive plan calls for commercial development in this area, but it was noted that a multi-family housing study shows that the site would be appropriate for a mixed use development with commercial and residential development. It would create a market within the site and be a draw for destination-type retail.

The planning commission noted the city’s 10% cap on multi-family dwelling units would need to be adhered to. Put another way, commissioners and other city officials would not allow the residential aspect to go forward without the commercial coming along with it, as that would create an imbalance.

The property is already zoned a PUD District. In looking at this high-level conceptual document, Licht said the projected the site would struggle to accommodate beyond 384,000 square feet of building space. The current concept plan is 400,000 square feet.

Trouble spots would be traffic on Quantrelle Avenue, a two-lane road with no sidewalk. Both traffic studies and parking studies will be needed. Parking for the project is proposed to be underground, which will be a challenge. The first floor of five buildings would all be commercial uses.

Hartung said he foresees the project being completed in two or three phases.

Licht said that planning commissioners were divided between those who supported the building heights and those that had reservations but were willing to consider it further all the way to some who were against the notion of an eight-story building and didn’t feel it was appropriate in Otsego.

Outlot A for open space is proposed to be privately maintained and publicly accessible with adherence to structure setbacks and limitations on cutting vegetation. It also includes a dock for public and/or commercial uses.

“The size of the boat shown (on the water) might be a little aggressive (due to the shallow nature of the river),” Licht said. “The idea was certainly appreciated. Commissioners supported taking advantage of the river and the landing.”