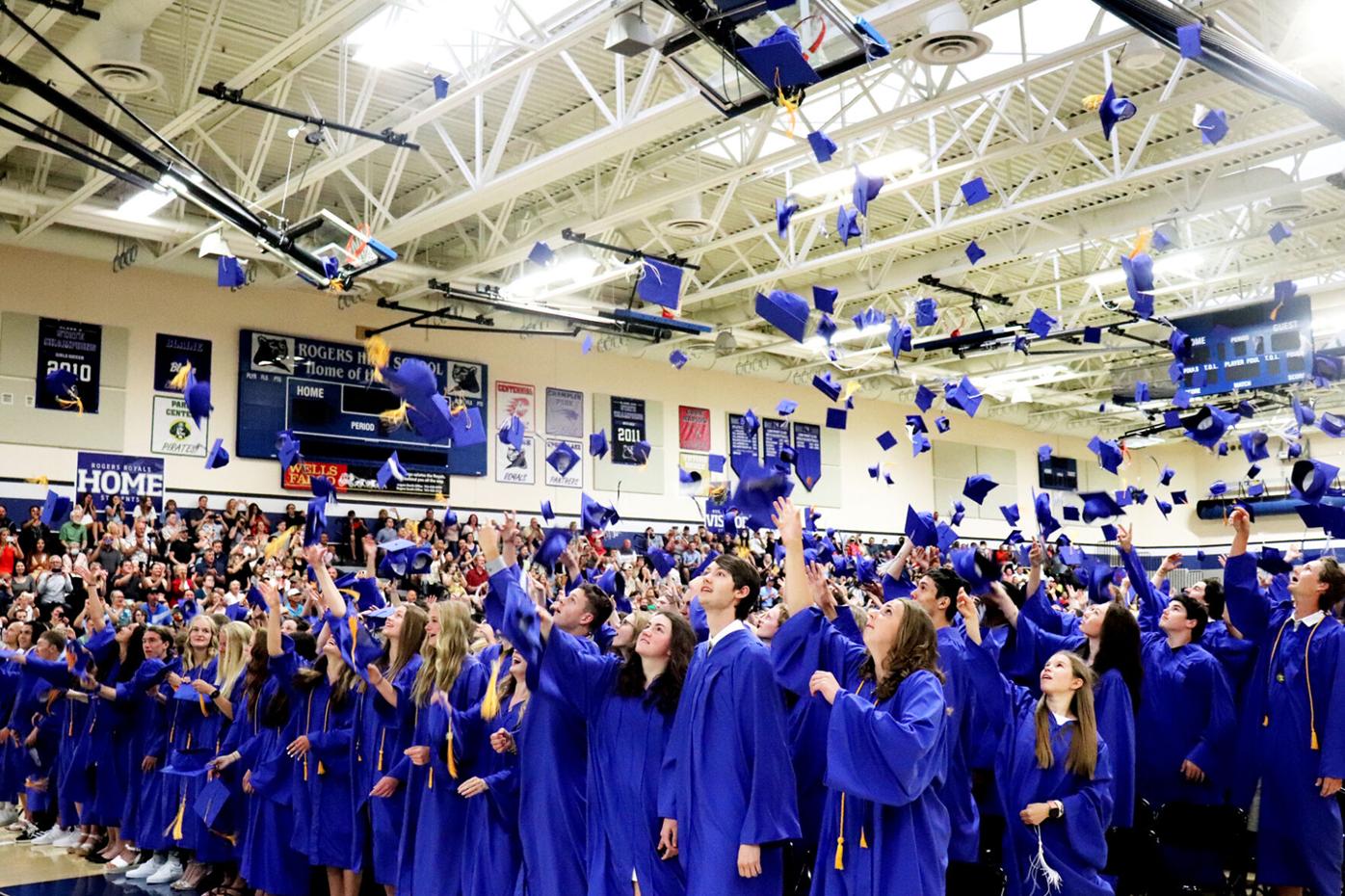 Students at all four high schools in the Elk River Area School District got an opportunity to throw their mortarboards into the air after graduating. 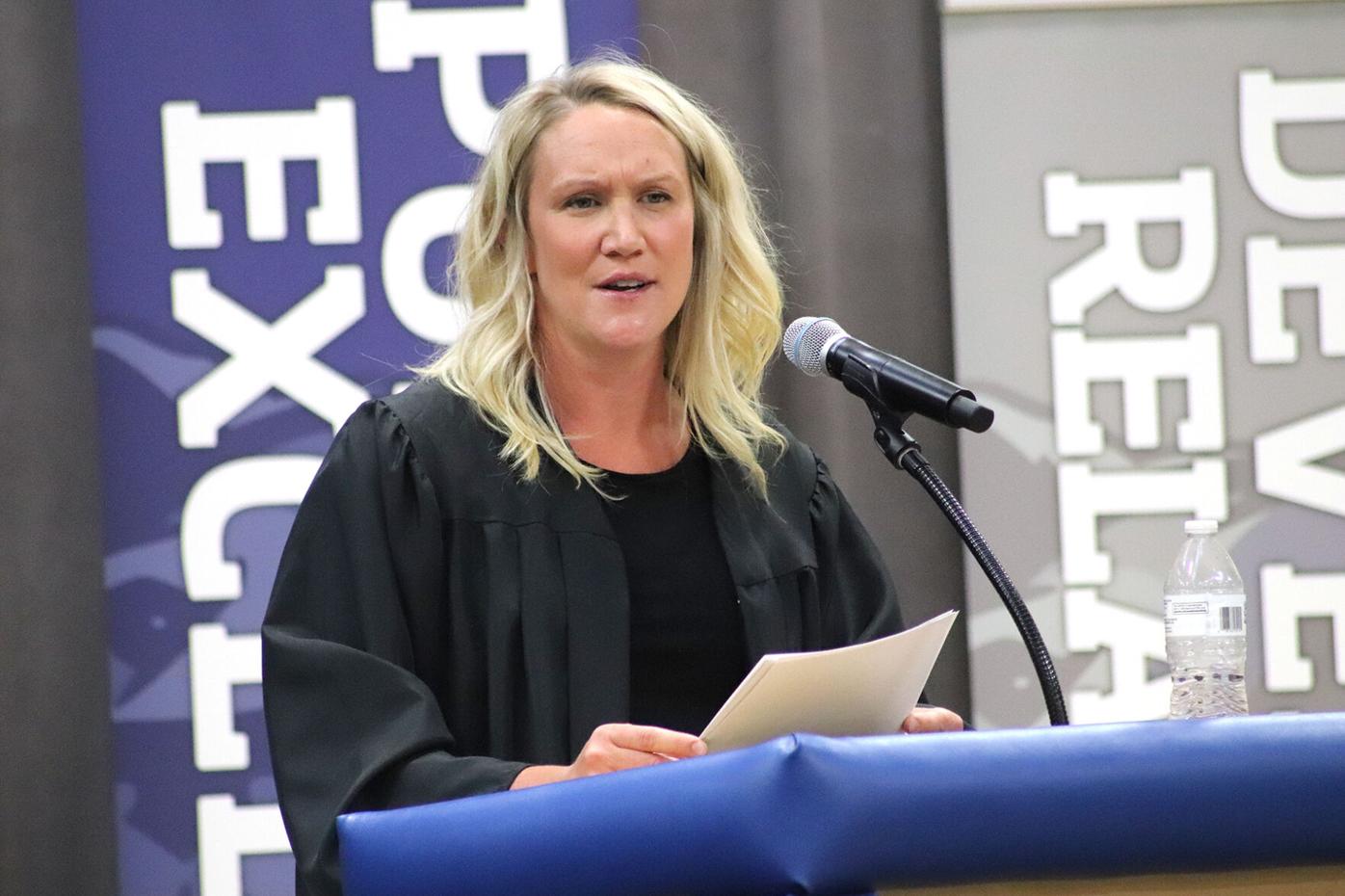 Janelle Moore, a teacher at Rogers High School for nine years, offered the Class of 2021 her final Top 10 to encourage them to achieve success. 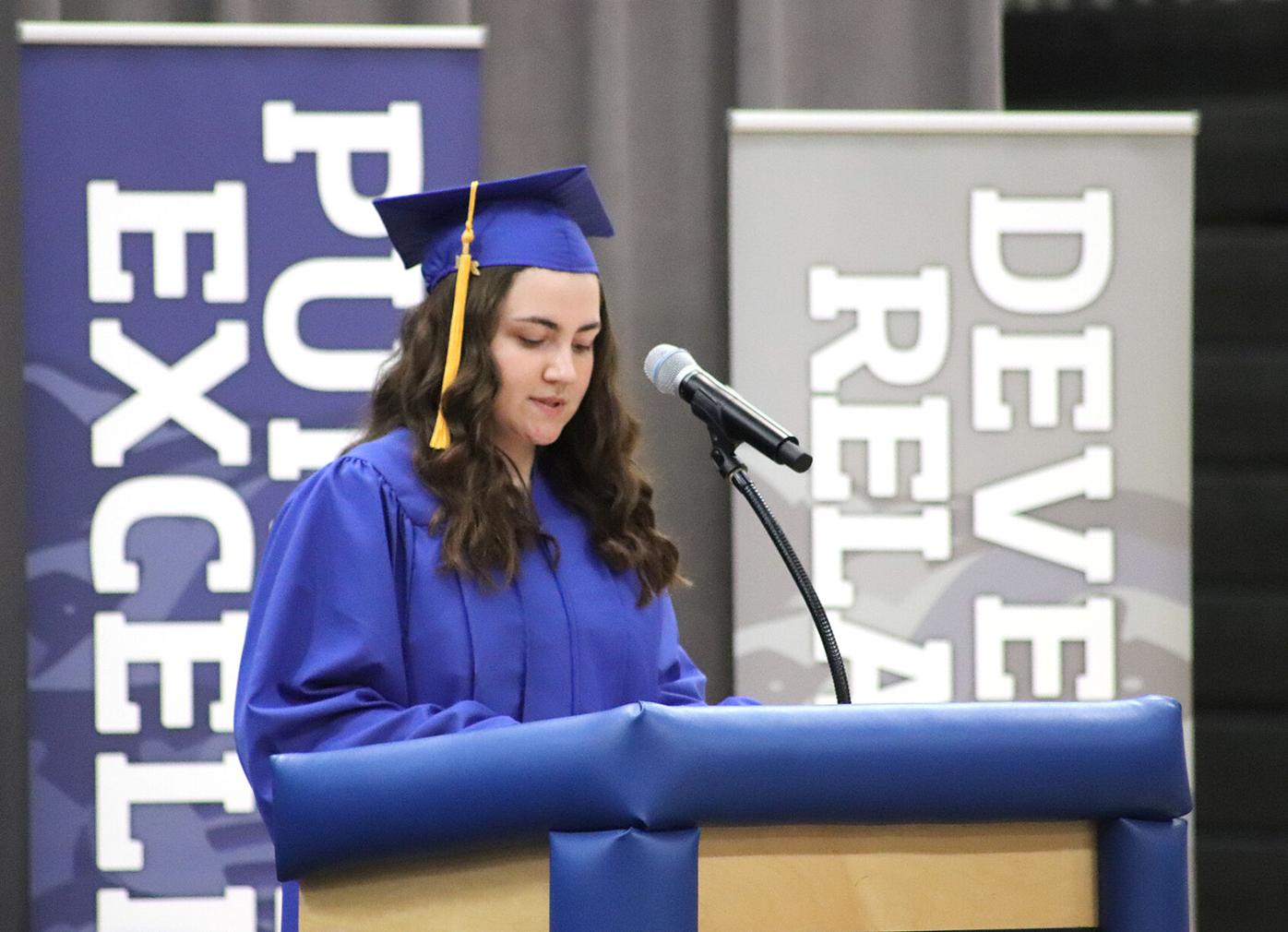 Rogers High School student Emma Schindhelm was chosen to speak to her classmates. 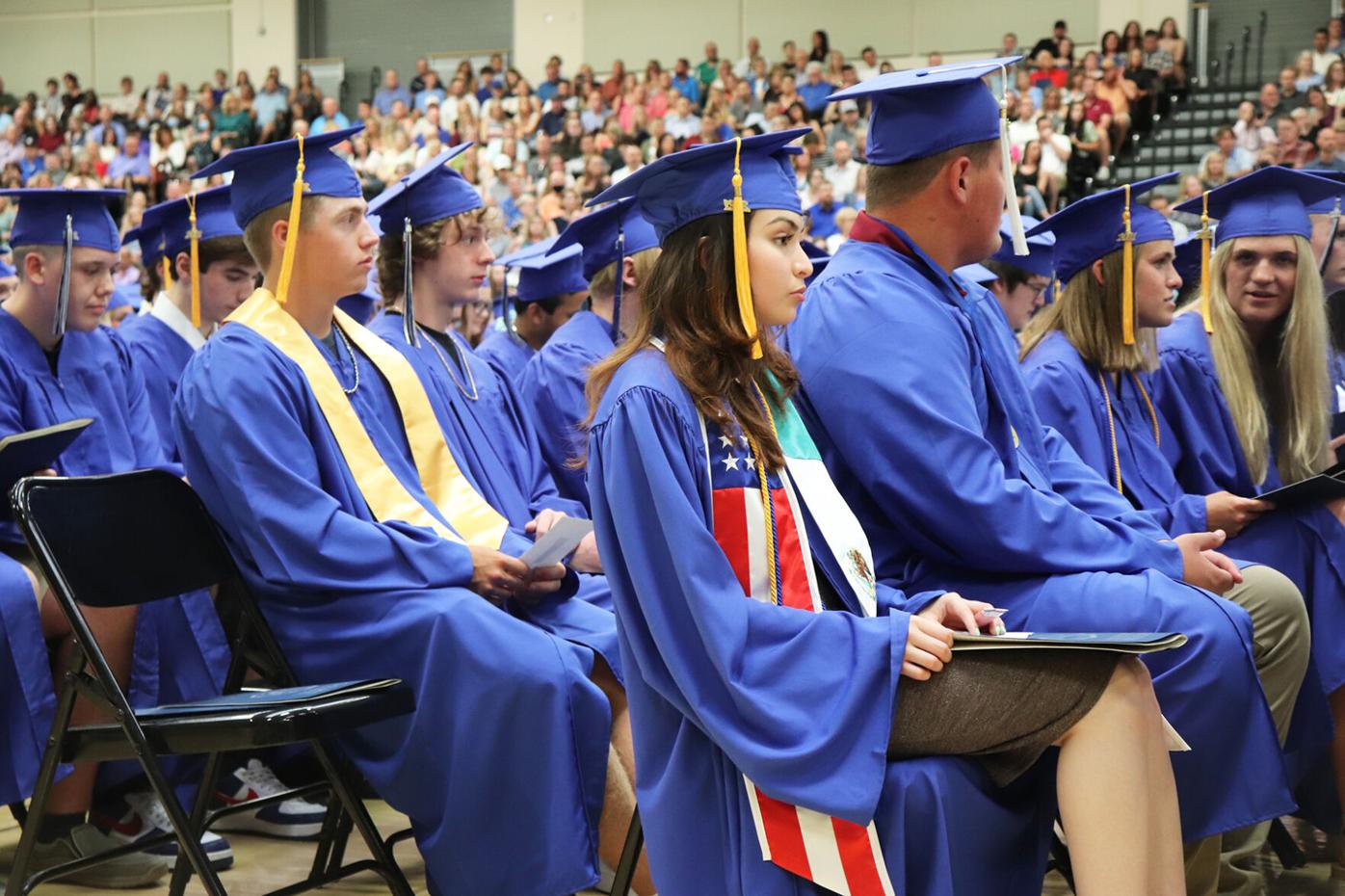 Students listened to Elk River Area School District Superintendent Dan Bittman address them and express how proud he and others were of their accomplishments.

Students at all four high schools in the Elk River Area School District got an opportunity to throw their mortarboards into the air after graduating.

Janelle Moore, a teacher at Rogers High School for nine years, offered the Class of 2021 her final Top 10 to encourage them to achieve success.

Rogers High School student Emma Schindhelm was chosen to speak to her classmates.

Students listened to Elk River Area School District Superintendent Dan Bittman address them and express how proud he and others were of their accomplishments.

Despite the craziest of circumstances over the past 16 months, 360 students graduated June 10 to become the 17th class of students to graduate from ISD 728’s southern-most high school that opened in 2003.

Many have already concluded that this year’s senior class has a story that rivals that of their parents and grandparents who had to walk to school in the snow and rain uphill both ways.

“We are so proud to be here tonight to celebrate our graduates,” said Superintendent Dan Bittman, the first of three speakers to address the full field house at in-person, maskless services void of social distancing. “We know that we could not do that without all of the individuals in this room. In fact, I had more than 1,200 emails from families making sure we could be in person for graduation without masks.”

The superintendent reflected on conversations he had with his parents while growing up as they talked about what life was like when they were kids and how they had to walk to school uphill — both ways.

“I can only imagine what you will be able to tell your kids and grandkids,” he said before projecting a few possible conversations.

Bittman went on to talk about how proud school officials are of the work the graduates did this past year and throughout their school careers.

“Through good times and bad, you have shown up and modeled leadership, and you have set a precedent for other people to follow,” he said. “You will go off and do amazing things in your life, ... and you will have an impact on people you never even know you impacted.”

The superintendent closed by asking the Royals to know that they always have a family back in ISD 728. “We will always be with you,” he said.

Student speaker Emma Schindhelm followed Bittman, and judging by what she had to say in her speech, “A year we won’t forget,” she knows she and her classmates will forever be part of a larger fraternity.

“No matter where you are, it’s always a great day to be a Royal,” she stated.

The RHS Class of 2021 motto, gleaned from a quote from actor and playwright Chadwick Boseman, says that the struggles they had along the way are only meant to shape them for their purpose. They must have big jobs ahead.

Schindhelm, the daughter of Kurt Schindhelm and Kelly Sager, talked about her and her classmates’ 13-year journey punctuated by a pandemic.

In kindergarten, they focused on the basics — learning their ABCs, to count to 100, and to tie their shoes, Schindhelm offered. They also learned how to share and be independent from their parents for the first time.

In middle school, they started becoming their own people, she said.

“We tried new things, joined different friend groups and discovered new interests with varying degrees of success,” she said. “We were introduced to a whole new group of people with different beliefs, backgrounds, and opinions, and we learned how to work together and become a community.”

She said high school taught the Class of 2021 all about responsibility, from the moment they began picking their own classes, making sure they were to school on time and making sure they studied for their tests rather than going on a Netflix binge.

Personally, Schindhelm got involved in soccer, Link Crew, Leos and Youth in Government.

“High school also gave us some of our best memories: sports, concerts, school dances, school plays and everything in between,” she said. “We made new friendships and discovered new goals.”

And that was all before the pandemic hit in the middle of their junior year.

“We had to adjust to quarantine, distance learning and missing out on high school events we had been looking forward to since we were in elementary school,” she said. “Not to mention having to wear face masks for six hours a day.

“But most importantly, we learned how to persevere and adapt to our surroundings, and discovered how important the connections we made here are by being cut off from them.”

Luckily, she said, seniors were able to return and finish their time at Rogers High School with their classmates and staff in person, even if it was still slightly different than what they imagined it would be.

“We have been through experiences together that nobody else will fully understand and we became stronger people because of it,” she said.

Schindhelm said high school will be remembered as the good old days, referencing a quote on the backs of senior T-shirts. It states: “I wish there was a way to know you’re in the good old days before you’ve actually left them.”

The speaker told her classmates she hopes they knew these were the good old days while they were happening and encouraged everyone to carry with them the memories of them. She also told them to know that the challenges they’ve faced, the successes they’ve had and the lessons they’ve learned have all prepared them to accomplish whatever they set their minds to.

Schindhelm plans to study biochemistry at the University of Minnesota, Twin Cities Campus.

The faculty representative chosen by the students to speak was Janelle Moore, a teacher who graduated from Milaca High School before earning a bachelor’s degree of St. Benedict’s and a master’s degree from Bethel University. She has been at Rogers High School for nine years where she has taught personal finance, accounting, business, DECA and sports marketing classes. She has also been involved in swimming and is currently involved with DECA.

Known for closing out school weeks with students with a game of “Top 10,” she gave a speech called “One Last Top 10” and came up with a list of 10 things that successful businesses and entrepreneurs do and shared how these ideas connect with her own life experiences.

For No. 10, she asked the students to be solution-oriented.

“It is easy to get wrapped up in the issues and problems that exist in our world and spend all of our time and energy on the problems,” she said. “But great business leaders in our world spend their time discussing solutions and working towards the goal of solving the problem. After all, who knew Amazon would solve all of my problems with one-day shipping.”

The next eight were:

6. Be a positive member of your community.

4. Earn money while you sleep.

Moore said she struggled with No. 8.

“I did not want anyone to see my weaknesses,” she said. “Especially my students. I wanted to present to you a perfect product. But I realized real quick, I am far from perfect. Forbes magazine reveals that top-ranked leaders ask for feedback and lots of it.

“There are so many great people in our world who can teach you and give you feedback,” she said. “Many of them are here supporting you today. Just ask. But be prepared to listen and receive their feedback.”

She also noted, about leadership (No. 7), is it does not have to be the loudest voice in the room.

“Oftentimes the best leaders listen to others and make you feel heard,” she said. “They value your opinions and ideas. Great leaders support you. Trust you. And believe in you.”

Earning money while you sleep (No. 4) is a good one for young people in their 20s to get into.

“Invest your money in your 20s,” she said. “A great book worth checking out is ‘The Millionaire Next Door,’ which keeps it simple: ‘Spend less than you have and invest for the future.’ ”

Choosing the right occupation is a factor, too, she said.

“Time is on your side, kiddos!” she said. “You have plenty of time to select the right career path and lots of time to earn money while you sleep.”

For Nos. 2 and 3, she suggested graduates spend their time wisely and dream realistically.

Time is an investment that needs to be budgeted for maximum return on investment.

She said great business leaders also allow people to dream. Walt Disney is one of them. He used a famous brainstorming method where he started with the “dreamer stage” where employees could share their raw ideas. “Why not?” he would say. Then they would break down the dreams into realistic plans.

“So dream about your future. … Why not? And then make realistic plans,” she said.

And the final Top 10 item came in the form of a question: “What is your unique value proposition?” she asked.

“Everyone has a story, a unique value,” she said. “Start your story today. You have so much to give and our world needs you and the unique values you bring.”

Upon conclusion of the speeches, Principal Jason Paurus presented the Class of 2021 for diplomas.

The ceremony was one of six graduation ceremonies in the district: three at traditional high schools; an alternative high school, the Ivan Sand Community High School; COMPASS for special needs students that continue schooling through the age of 21; and the Indian Education graduation ceremony for Native American students.

Chairwoman Thompson noted the one constant she noticed at all of the ceremonies this year was all the smiles on students’ faces. Perhaps they were even wider than the ones that their parents and grandparents had when they graduated. After all, this is the Class of 2021.