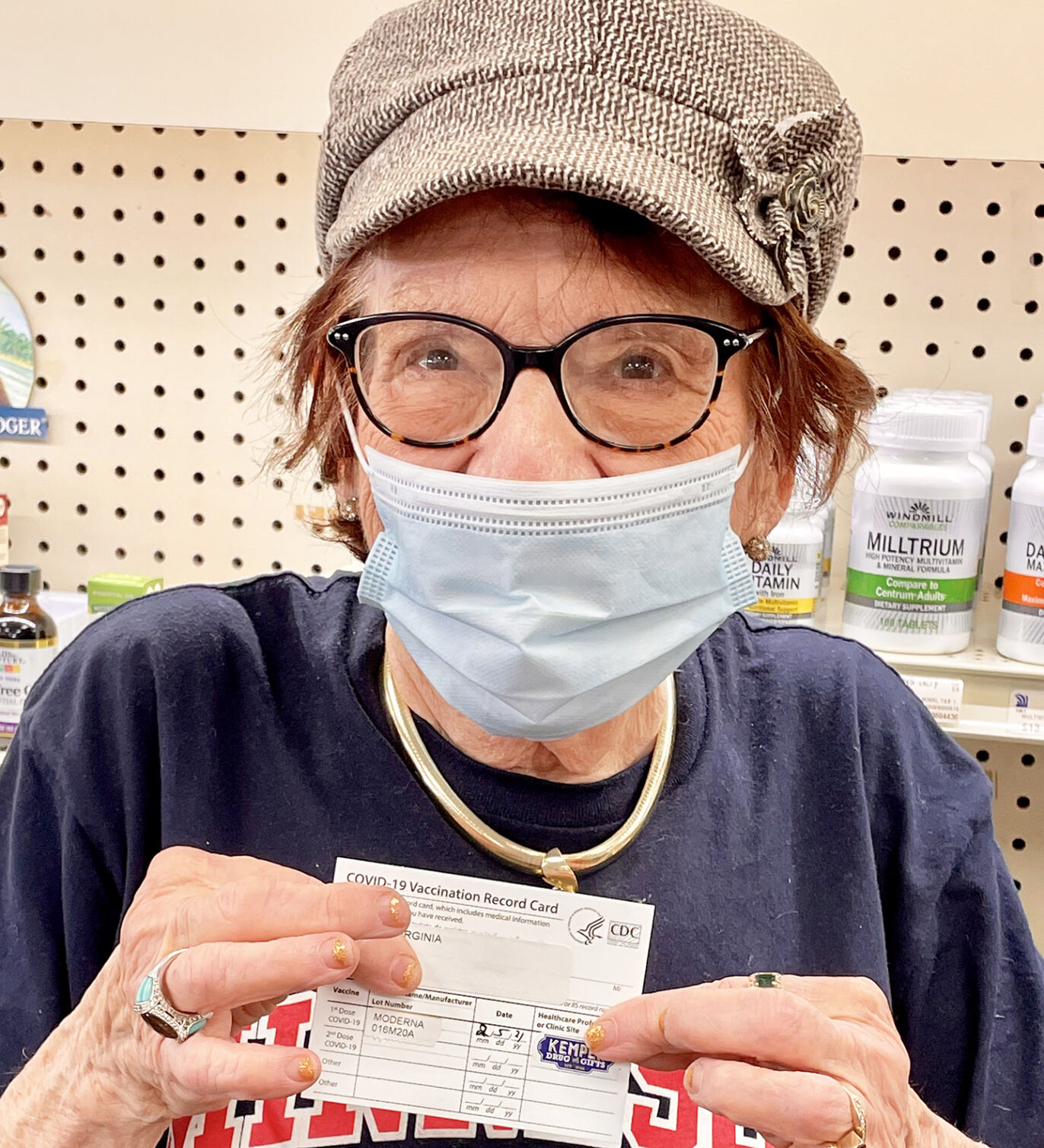 Virginia Barnier, 89, of Elk River, proudly held her record of vaccination card that showed she received her first dose of the Moderna vaccine in the fight against COVID-19. 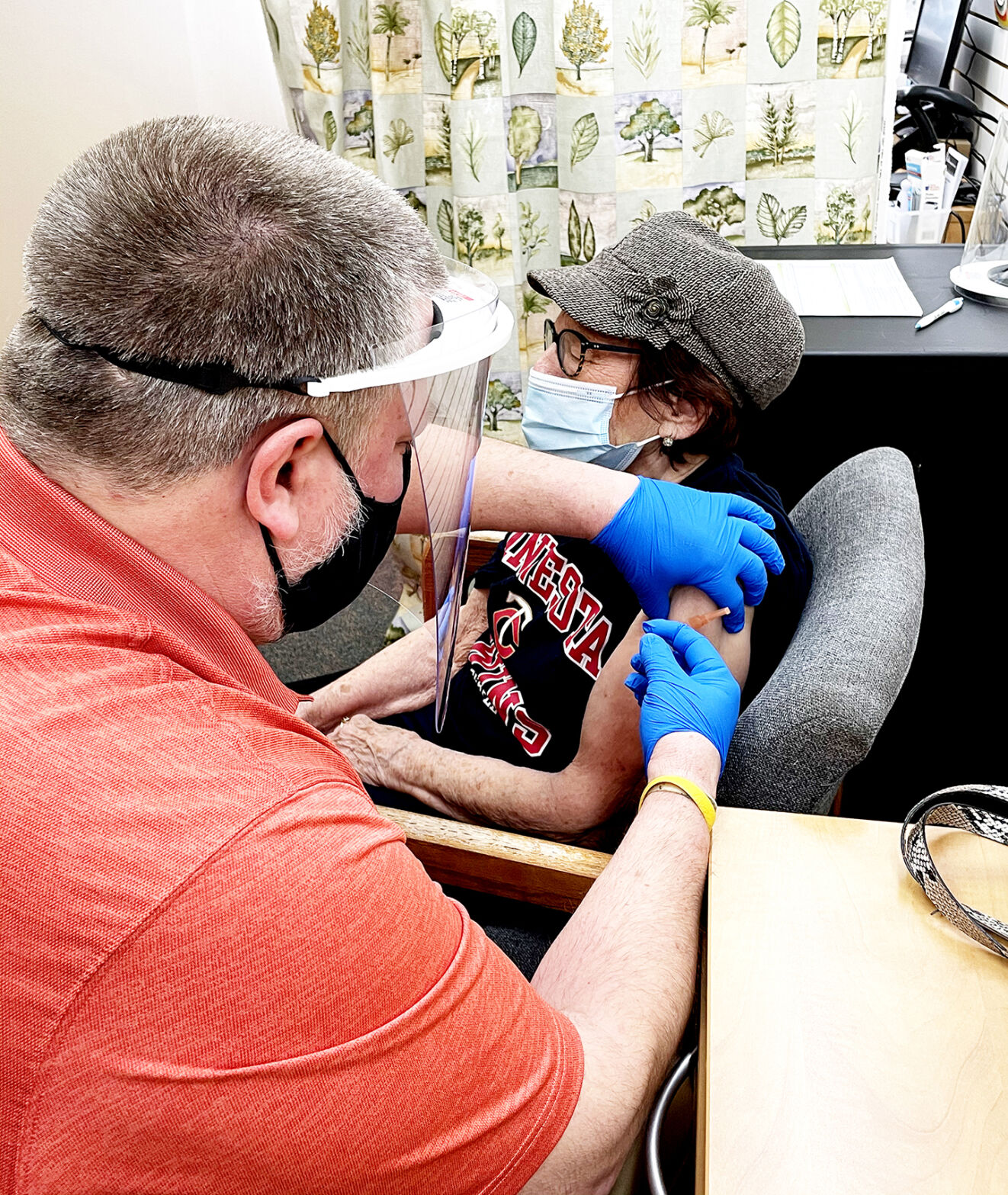 Kemper Drug Pharmacist Paul Ebert gave Barnier her shot, and she is scheduled to get her second dose 28 days from the day she got this one. She was thrilled to be taken care of by her hometown pharmacy. 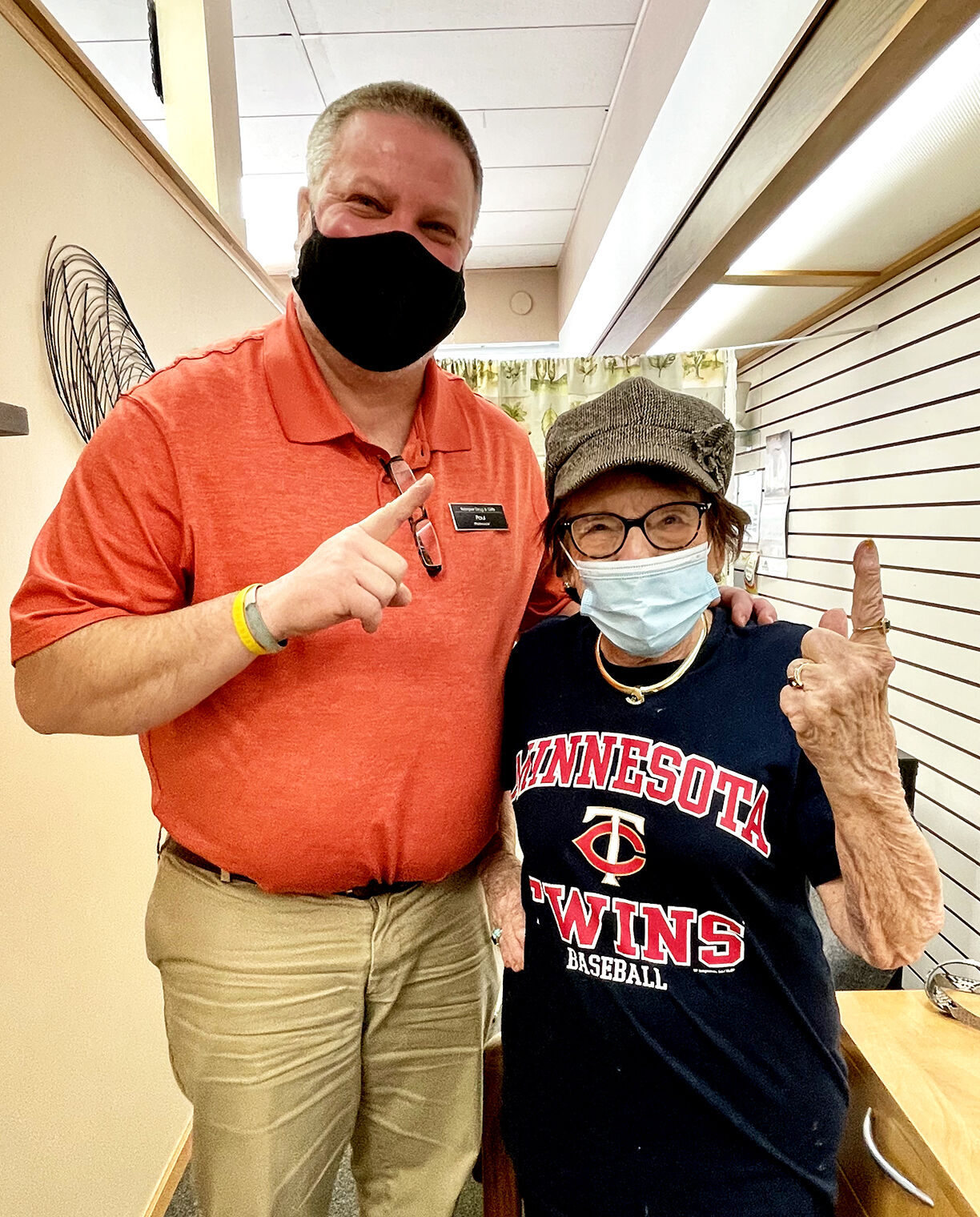 Kemper Drug pharmacist Paul Ebert celebrated with Virginia Barnier after giving his customer her first dose of the Moderna vaccine.

Virginia Barnier, 89, of Elk River, proudly held her record of vaccination card that showed she received her first dose of the Moderna vaccine in the fight against COVID-19.

Kemper Drug Pharmacist Paul Ebert gave Barnier her shot, and she is scheduled to get her second dose 28 days from the day she got this one. She was thrilled to be taken care of by her hometown pharmacy.

Kemper Drug pharmacist Paul Ebert celebrated with Virginia Barnier after giving his customer her first dose of the Moderna vaccine.

People all over the world are looking for a way to get vaccinated against the deadly coronavirus.

For 100 local folks they were thrilled to learn last week they would be able to get the first of two shots just minutes from their home at Kemper Drug in downtown Elk River.

The pharmacy at 323 Jackson Ave. was one of 19 pharmacies across the state that received at least 100 doses to begin work on hometown waiting lists. It’s part of a pilot program that is teaching the state a good way to disseminate highly sought after immunization, according to Sarah Derr, the executive director of the Minnesota Pharmacists Association.

The Elk River operation proved efficient and effective and is in line to consistently receive 100 doses a week for the time being. The local pharmacy still has a couple hundred people on its waiting list, but that number is expected to grow considerably as word gets out.

“It has been really exciting,” said Deborah Leedahl, a pharmacist and the owner of Kemper Drug. “Normally, people are not this excited to get a vaccine, but since we are contacting people who have asked about vaccines, they’re very excited to hear from us.”

Pharmacists had grown frustrated as had their patients with the rollout of vaccinations.

“(Our customers) have gone through a lot of rigamarole, being in lotteries and waiting lists and not getting answers,” she said. “To get a call from their community pharmacy ... and learn the people you know are going to take care of this for you is pretty uplifting. They have expressed huge amounts of relief and excitement.”

Virginia Barnier, an Elk River resident since 1947, was one of them.

“This is history,” she said, noting it was an emotional experience. “People all over the world need a shot, and here we are in little ol’ Elk River and I was called to get one of them.”

Barnier, who will turn 90 in April, looks forward to someday achieving some level of normalcy.

She remembers back to the days of polio — before and after a vaccine was invented and the revolutionary role the Sister Kenny Clinic played in the treatment and the impact vaccinations had on restoring normalcy.

“I think it’s giving us some good insight into how pharmacies can roll out vaccine once it’s allocated to them,” Derr said during a KARE 11 interview. “Last week we had 19 pharmacies that received at least 100 doses. We have three areas across the state that pharmacies received 500 doses to help with teachers and child care providers.”

Kemper’s involvement in vaccinations for the coronavirus started with emails.

The first resulted in their operation being picked to do an off-site vaccination event. That opportunity came after a big box pharmacy relinquished the chance. That event took place on Feb. 11.

The second email came from the state officials who said they were prepared to send them 100 doses if they were ready and wanted them.

They were more than willing.

“We were honored that we were chosen,” Leedahl said. “It’s not always the little guy that gets chosen for this kind of thing.”

That effort played out on Feb. 4, 5 and 6. A four-hour session on the first day and two two-hour sessions on the following days dispensed with the 100 doses that were allotted, Leedahl said.

She said it took that much time, if not double that amount of time, on the front end between calling to line up customers’ appointments and have them complete the pre-screening efforts.

“I think it went pretty well here,” Leedahl said. “People were impressed with how well it went and how quickly it went. That was our goal of course.”

Kemper is administering the Moderna vaccine, so the second dose is given 28 days after the first.

“People leave here after getting the first dose having made an appointment for the second dose.”

Kemper will be administering another batch to first-timers on Feb. 13 and 14. Leedahl knows the Elk River pharmacy’s list will soon be growing. Another pharmacy she’s aware of in this same pilot program has already seen its waitlist top 2,000 people.

“We’re focusing on our customers first,” Leedahl said. “We wouldn’t be here without them, so we’re taking care of them first.”

Kemper has a private vaccine room that its pharmacy has been using for years for flu shots and other standard vaccines.

“It’s exciting to be the only ones in town right now,” Leedahl said. “We’re really glad to be a part of helping get our community back to normal.”