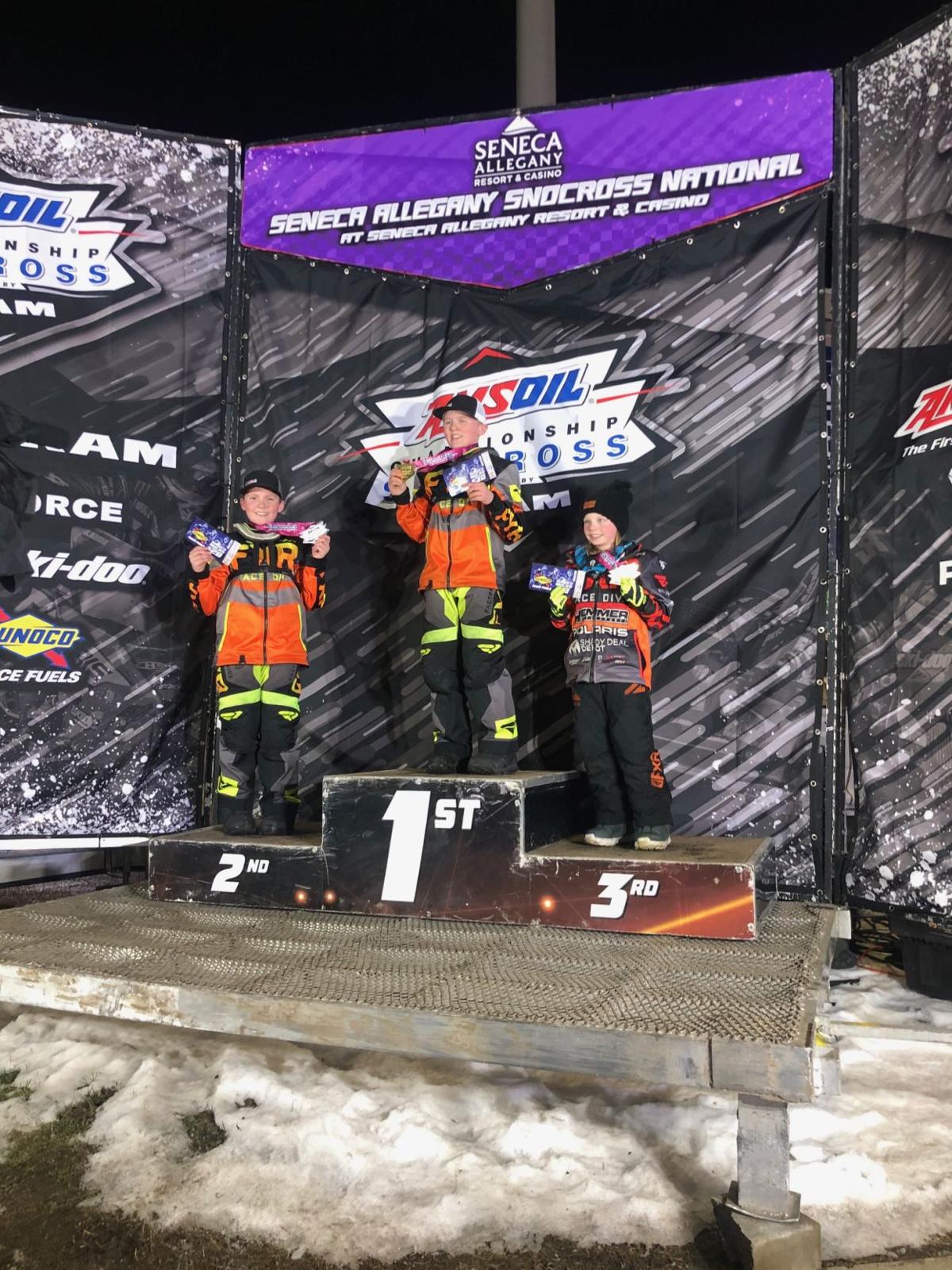 Elk Rivers Wyatt Skogquist (center), A.J. Skogquist (left) and Nowthen's Avery Hemmer (right) stand on the podium during the awards ceremony following the 120 Champ class race at the Seneca Allegany Snocross National in Salamanca, New York on Feb. 22. Hemmer led all riders in her division with 248 points before the two remaining races of the season were canceled due to the COVID-19 pandemic. 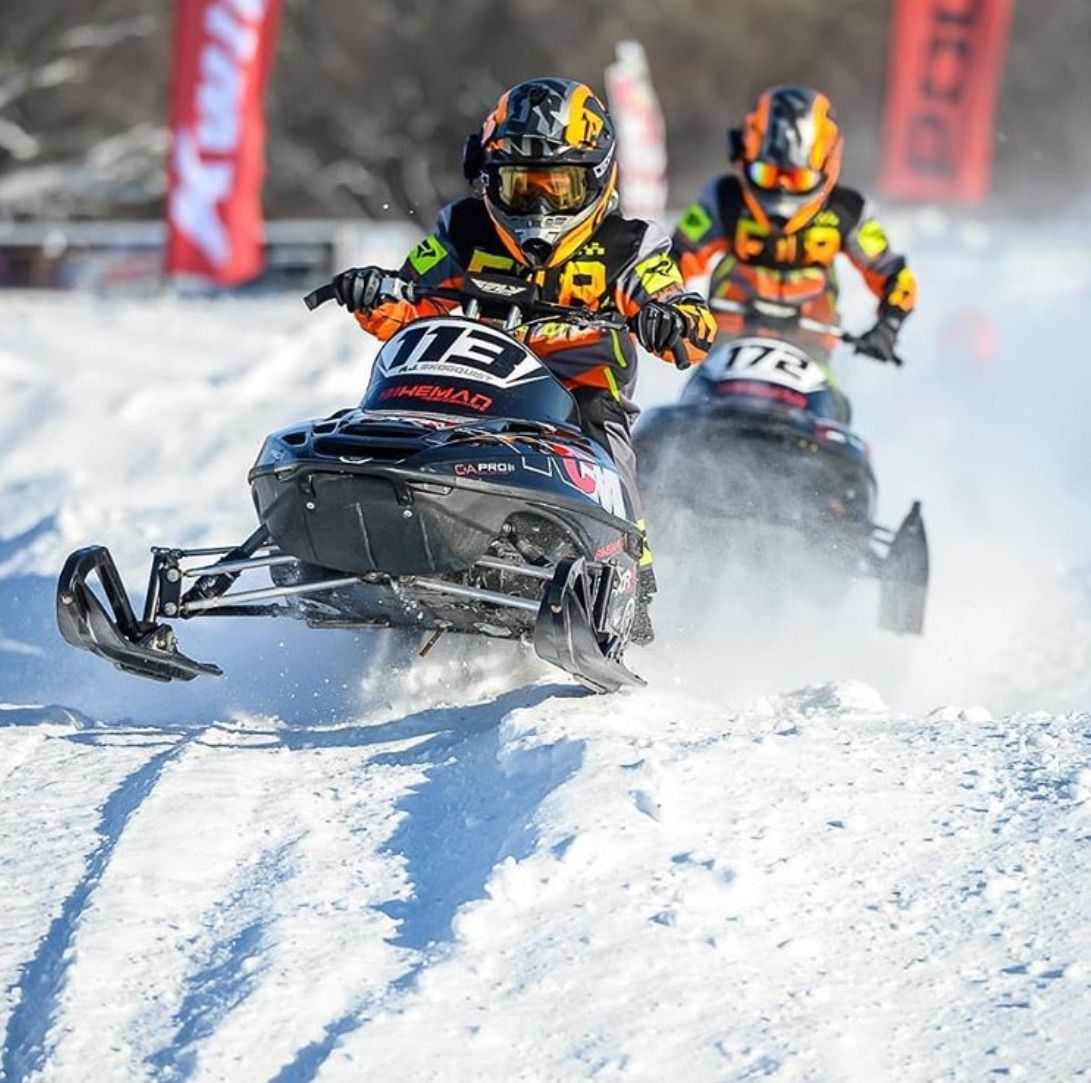 Elk Rivers Wyatt Skogquist (center), A.J. Skogquist (left) and Nowthen's Avery Hemmer (right) stand on the podium during the awards ceremony following the 120 Champ class race at the Seneca Allegany Snocross National in Salamanca, New York on Feb. 22. Hemmer led all riders in her division with 248 points before the two remaining races of the season were canceled due to the COVID-19 pandemic.

For the past three years, A.J. Skogquist and his brother Wyatt have been competitive snowcross racers. The two brothers are 10 years old and attend Twin Lakes Elementary School in Elk River.

On Feb. 22 in Salamanca, New York, A.J. and Wyatt finished in first and second place respectively in the 120 Champ class race as part of the Seneca Allegany Snocross National. Avery Hemmer of Nowthen finished in third place. The Seneca Allegany Snocross National is one of eight races sponsored by the Amsoil Championship Snocross series. The 120 Champ class is for riders ages 6-12. The Amsoil Snocross Championship Series sponsors snowmobile races across all age groups and skill levels, from 6-year-old riders to professionals.

“It was pretty exciting,” he said. “She was able to get up to third.”

A.J. and Wyatt Skogquist began racing in 2017. They started racing on Thursday nights at the ERX Motor Park in Elk River as part of the Grassroots Snocross Series. Their father, Allen, put orange duct tape on the back of his sons’ motorcross vests and drew numbers on the front.

Allen Skogquist said he never thought that what started out as a Thursday night ritual in Elk River would turn into competitive racing. The boys race on Thursdays for the Grassroots Snocross Series and also race for the ISOC Regionals in addition to the Amsoil Snocross Series. A.J. and Wyatt race for 13 weekends and race as long as they do well in school.

“We’re definitely all in now,” Allen Skogquist said. “The boys have the proper uniforms today and we spend so much time making this all happen for them and us. We put a lot of work effort into these little machines. The 120 Champ class is an open-model class, so every week when we race, over the last couple years, we’re constantly trying to make the machines faster and better. It’s a real big team effort. The boys have really improved their riding skills. It’s super fun to be from this area where we have the support of the ERX Motor Park over there in Elk River. It makes this all possible.”

Like all sports, there is risk for injury. With motor sports such as snocross and BMX racing, the chance for a rider to injure himself grows.

Alycia Skogquist, the brothers’ mother, said she doesn’t get nervous about either boy crashing or injuring himself during a race.

They have wiped out and they’ve had some minor crashes and that type of thing,” Alycia said. “We have had some injuries but overall, I don’t feel nervous about injury. It’s not a major concern.”

During the 2019-20 season, the Amsoil Snocross Championship series held six events. Another two remained on the schedule—the Michigan Snocross National March 13-14 in Grand Rapids, Michigan and the Ram Trucks Snocross Grand Finale March 20-22 in Lake Geneva, Wisconsin. Both events were cancelled due to the COVID-19 pandemic.

A.J. and Wyatt finished second and third in the 120 Champ class standings behind Hemmer. Hemmer finished with 248 points, Wyatt with 245 and A.J. with 222.

Steven Hemmer said his daughter was disappointed that she didn’t get to finish the season as planned. Avery Hemmer plans to ride dirt bike during the summer.

“She won the points, [but] she’s disappointed that she wasn’t able to go out and race those last two races,” Steven Hemmer said.

Allen Skogquist said that snocross riders and others who play individual sports have to be mentally sharp and have the right mindset.

“Being a snocross racer, you have to have a positive attitude,” he said. “You have to believe you can go win. [If] you go to the race track and believe you can’t win, you’re not going to win. It’s like any individual sport. That’s the most difficult thing for a snocross racer because you have highs and lows. You’ll go out there and have a problem with the snowmobile or maybe the snowmobile’s not running properly or maybe you go fall off and have a crash. The ability to bounce back and stay positive and believe in yourself…I believe that’s what makes a good snocross racer.”

While Allen Skogquist said he’ll remember his sons’ winning races, he’ll also cherish the memories made off the track.

“I’ll cherish forever all the hugs and thank yous I get from them,” he said. “It’s us spending the weekend together as a family and working together for a common goal. The reason we’ve had so much fun with it is all the friends we’ve made at the track. Like any sport, parents get to know each other and kids get to know each other and be friends. The snocross parents are extra special. Everyone’s there to help each other out. If your snowmobile breaks down and you’re missing a part, someone’s there to give you the part. The friendships that we’ve made at the track are something that we’ll cherish forever.”