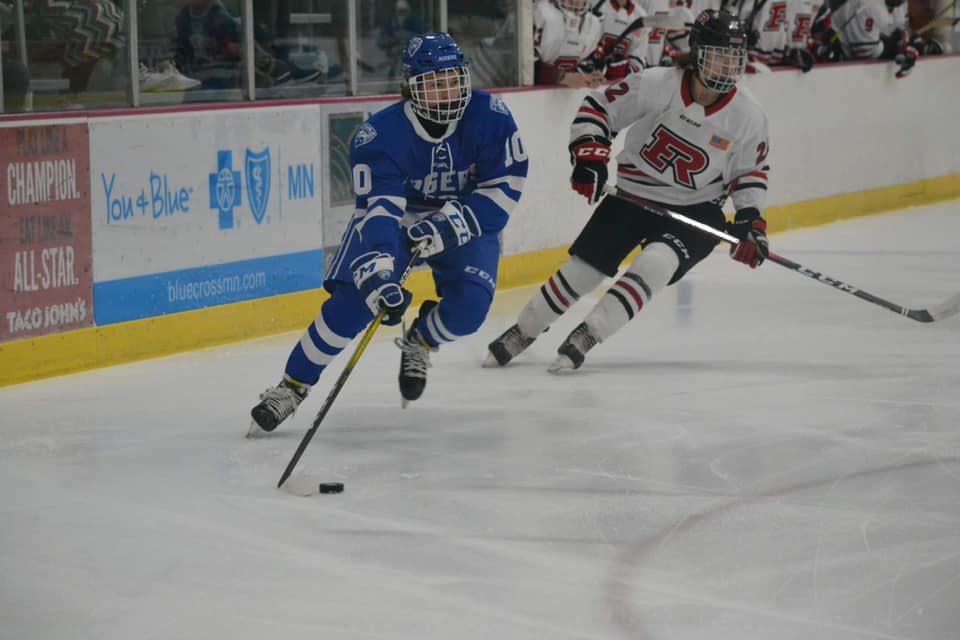 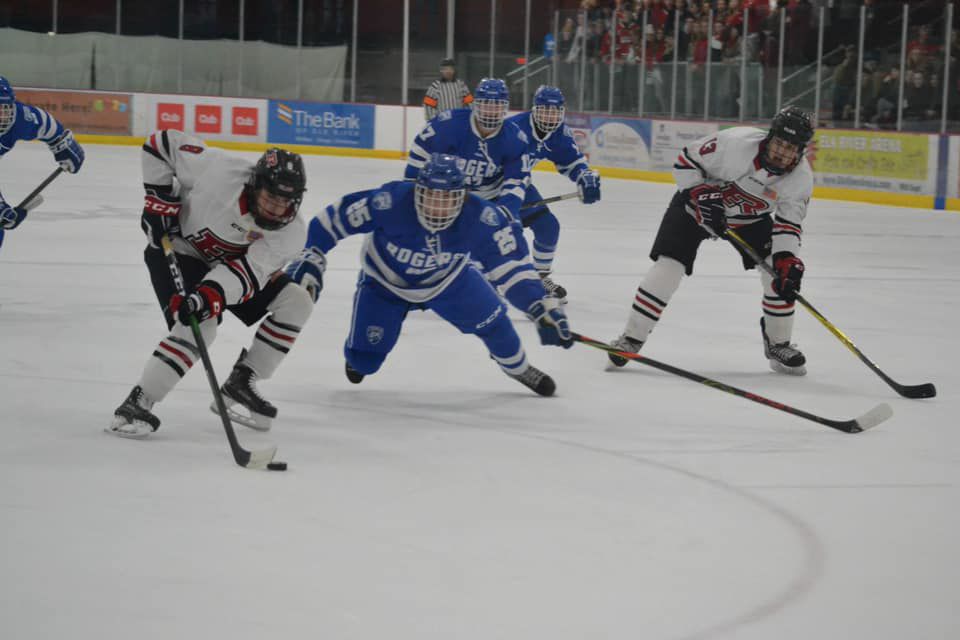 Rogers defender Easton Dobitz tries to knock the puck away from Elk River forward Bjorn Franke during the Royals' 5-1 loss to the Elks on Dec. 5 at Elk River Ice Arena. It was the first meeting between the two programs in history. 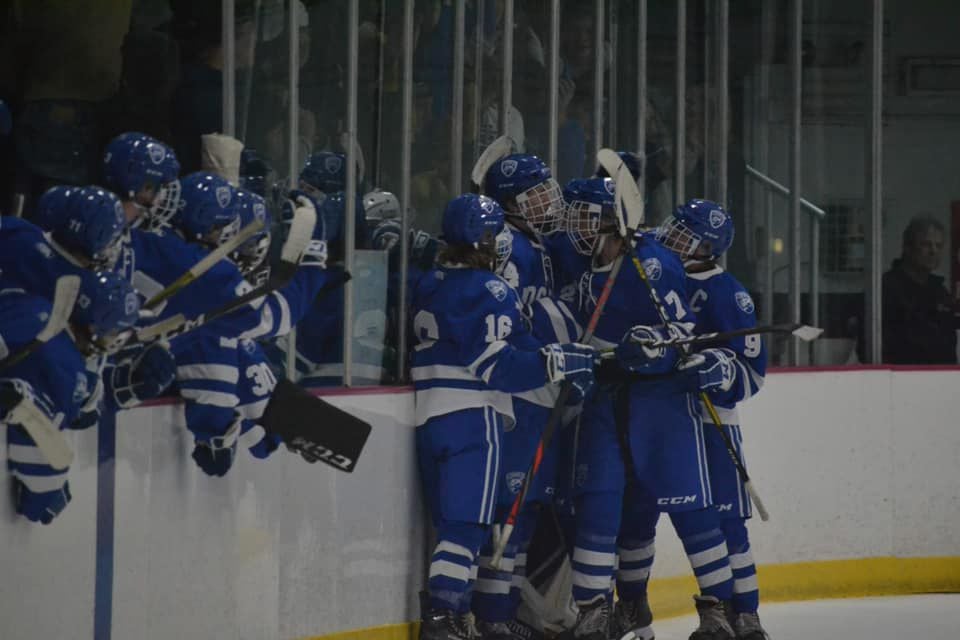 The Royals celebrate after senior defender Tate Lenius scored to make it 2-1 Elk River during Rogers' 5-1 loss to the Elks on Dec. 5.

Rogers defender Easton Dobitz tries to knock the puck away from Elk River forward Bjorn Franke during the Royals' 5-1 loss to the Elks on Dec. 5 at Elk River Ice Arena. It was the first meeting between the two programs in history.

The Royals celebrate after senior defender Tate Lenius scored to make it 2-1 Elk River during Rogers' 5-1 loss to the Elks on Dec. 5.

“They have a very high-end first line,” Brown said. “We lost our senior captain defenseman [Ryan Streeter] to illness. He’s out for a month and guys are going to have to step up.”

The first period was a goaltending duel. Rogers outshot Buffalo 9-4, as Elks senior goaltender Josh Koziol and Royals senior goaltender Patric Loeffler traded saves. Two Elk River goals were waived off including one for a high stick, before Elk River got on the board first at 8:07 of the second period. Senior forward Austen Humphrey beat Loeffler for his second goal of the season. The Elks held on to a 1-0 lead heading into the third period.

Humphrey scored his second of the game at 9:00 of the third to make it 2-0 Elk River. Rogers senior defenseman Tate Lenius beat Koziol for his first goal of the season at 10:29 of the third to cut the Royals’ deficit to one. Humphrey completed his hat trick at 12:00 of the third. Elks fans celebrated as the song “Chelsea Dagger” by The Fratellis blared over the Elk River Ice Arena speakers. “Chelsea Dagger” is the official goal song of the NHL’s Chicago Blackhawks since the 2009 Stanley Cup playoffs. Elk River also uses a recording of the Blackhawks’ goal horn as its own. The Elks scored two more goals in the third and handed Rogers its first regular-season loss since Feb. 16 when the Royals lost 6-1 to Buffalo.

Elk River head coach Ben Gustafson said he thought that Tuesday night was its most complete game of the season.

“We’ve talked about playing 51 minutes, and I thought we did a good job at doing that,” Gustafson said. “We played well defensively. We talked about team defense and buying into that and tonight, looking back at the last four games, tonight was the best that we did that.”

Humphrey scored his first hat trick since Jan. 15 when he scored a trio of goals against Spring Lake Park in the Elks 5-0 win over the Panthers.

Elks senior forward Zach Michaelis said Humphrey had been getting bad puck luck in the past few games. Michaelis, who is committed to play for the University of Nebraska-Omaha next season, assisted on two of Humphrey’s three goals.

Koziol allowed only one goal on 37 shots, picking up his second win of the season. He and Elk River are undefeated when Koziol allows one goal or less.

After losing 2-1 to Centennial in overtime on Saturday, Elk River was scheduled to play Blaine (3-1-0, 1-0-0) on Tuesday and Robbinsdale Armstrong-Cooper (4-2-0, 0-1-0) on Thursday. Both games will begin at 7 p.m. After those two games, the Elks will not play again until Dec. 19 when Elk River will play defending Class 2A state finalist Eden Prairie (3-0-0, 0-0-0) in the first game of the annual Edina Holiday Classic at 6 p.m. at Braemar Ice Arena in Edina. The Edina Holiday Classic runs through Dec. 21.

Michaelis said the rivalry between Rogers and Elk River has begun and the two teams will become more familiar in the coming games and seasons.

“After tonight, it’s only up from there,” Michaelis said. “Hopefully, each year and year it keeps growing and growing. Tonight was awesome. It was a lot of fun.”