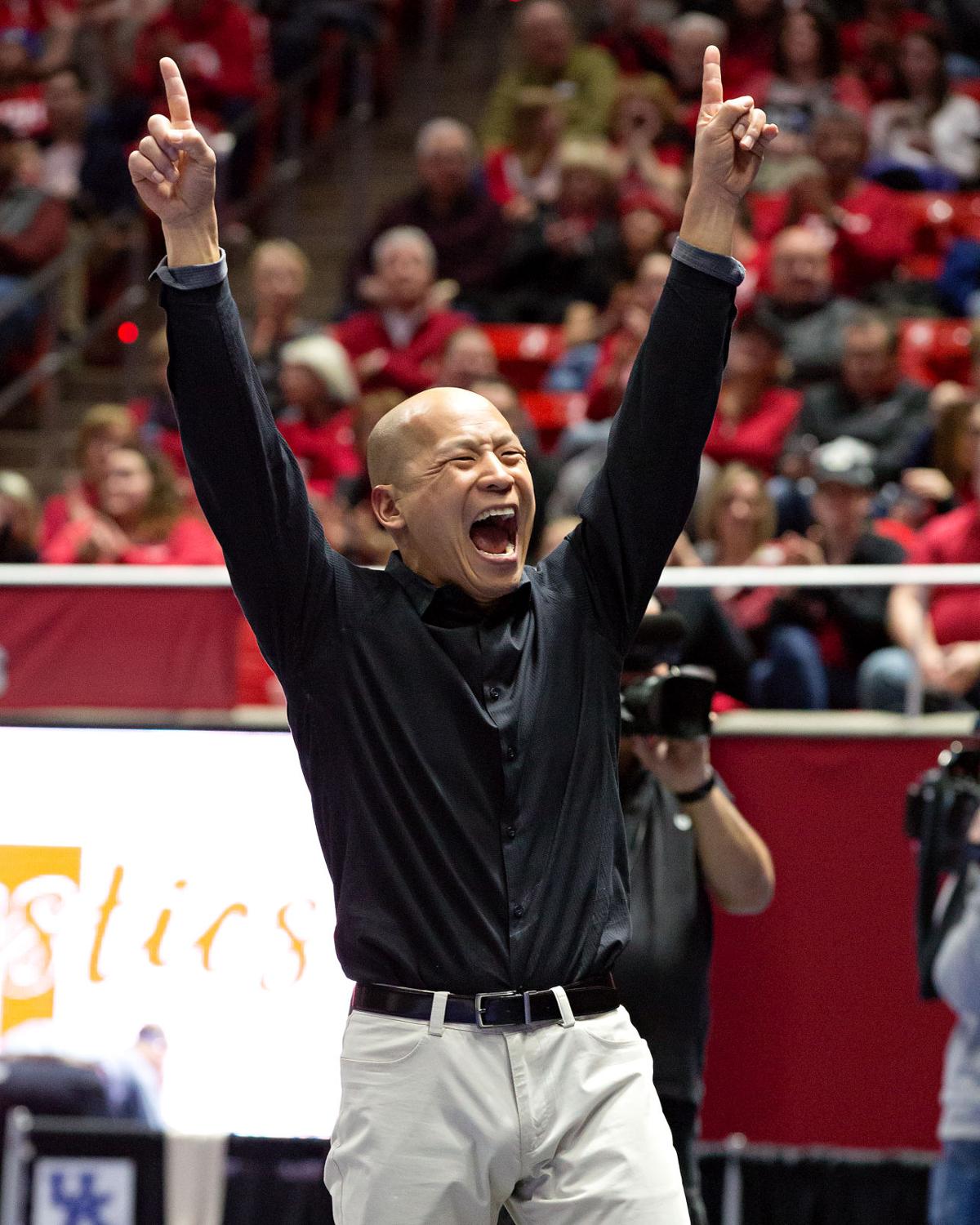 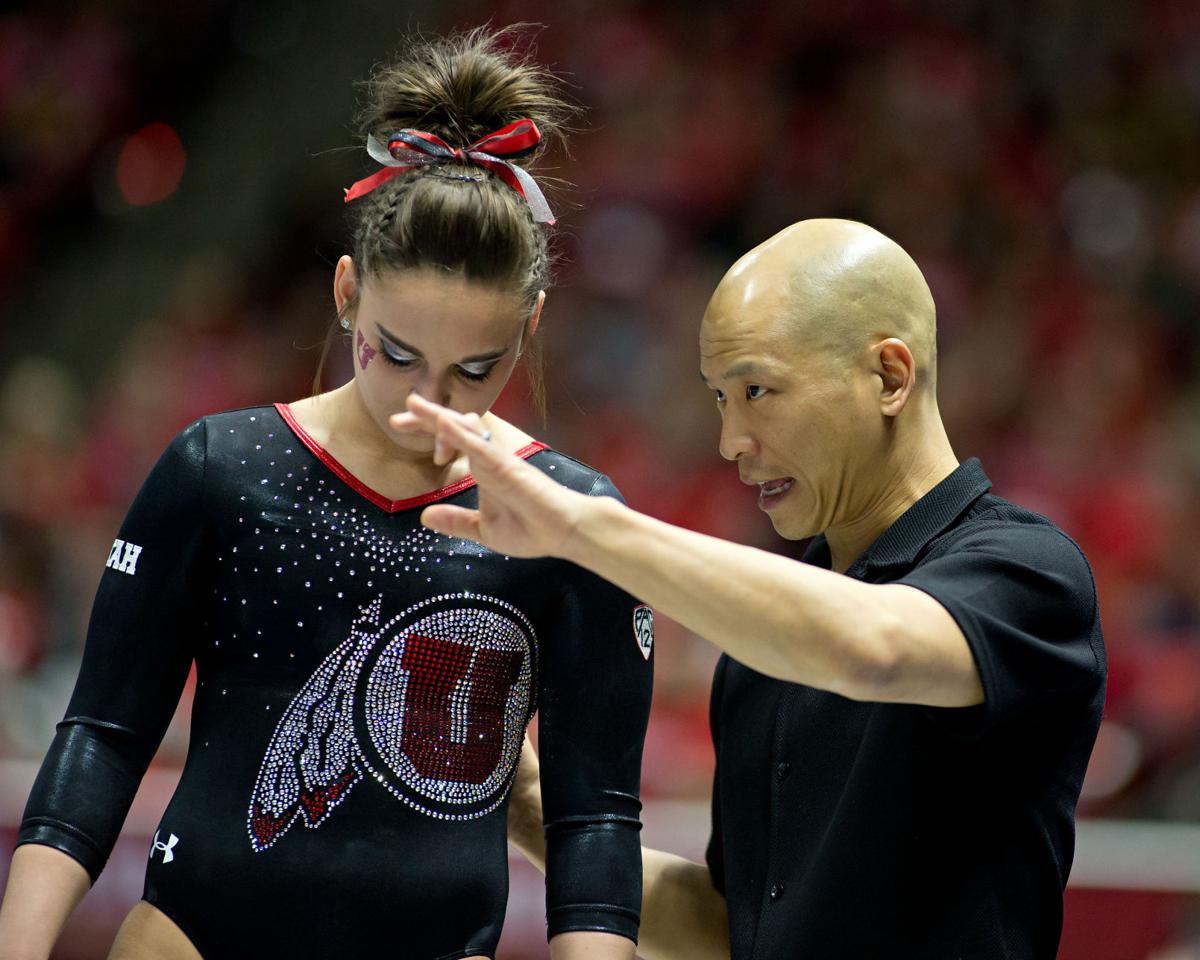 Utah gymnastics head coach Tom Farden discusses strategy with gymnast Macey Roberts during the Utes' 197.500-196.275 win over Stanford on March 3, 2017 at Jon M. Huntsman Center in Salt Lake City. Farden, a native of Anoka, served as an assistant coach with the Elk River High School team in the 1990s including the 1993-94 team that made the 1994 state gymnastics tournament. Farden served as Utah's co-head coach along with Megan Marsden from 2016-2019 and is in his first season as the sole head coach of the Utes. 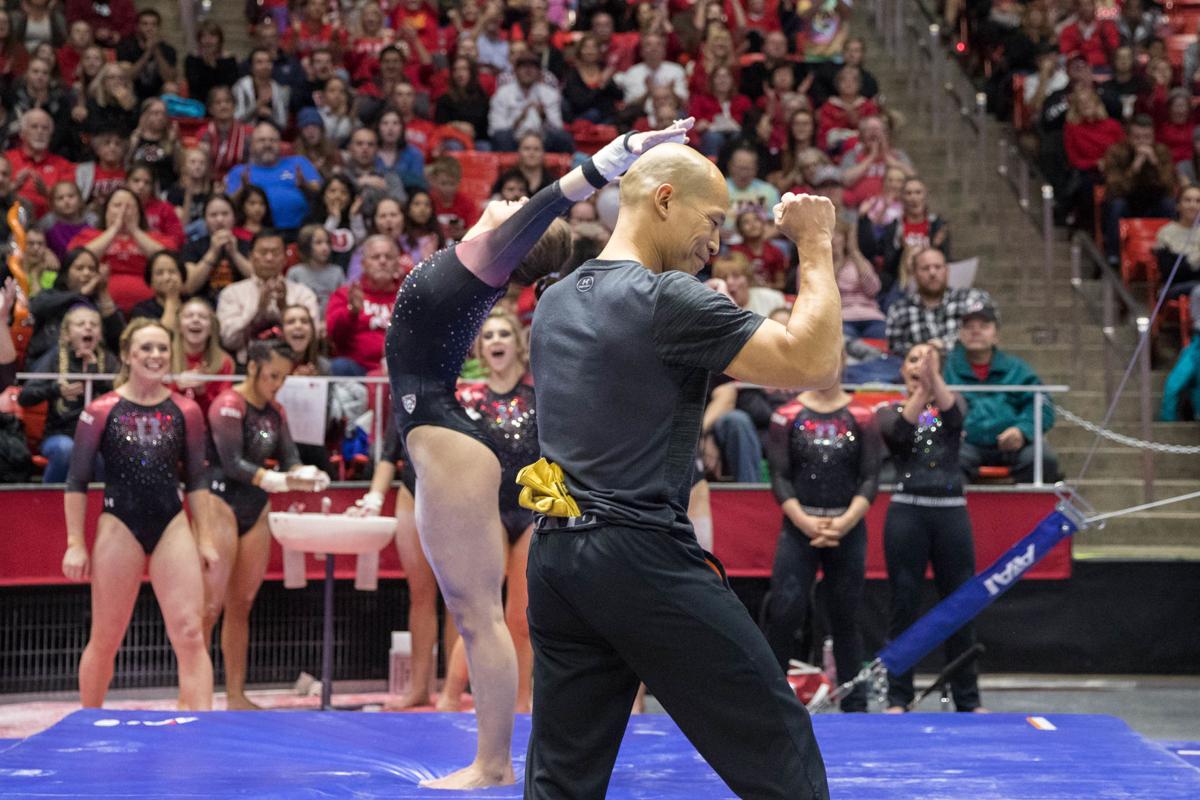 Utah gymnastics head coach Tom Farden discusses strategy with gymnast Macey Roberts during the Utes' 197.500-196.275 win over Stanford on March 3, 2017 at Jon M. Huntsman Center in Salt Lake City. Farden, a native of Anoka, served as an assistant coach with the Elk River High School team in the 1990s including the 1993-94 team that made the 1994 state gymnastics tournament. Farden served as Utah's co-head coach along with Megan Marsden from 2016-2019 and is in his first season as the sole head coach of the Utes.

Minnesota native Tom Farden won his 100th meet as head coach of the Utah Utes gymnastics team on March 1. No. 4 Utah defeated No. 13 Washington 197.675-197.600 at Alaska Airlines Arena in Seattle. It also clinched the inaugural Pac 12 regular-season title for the Utes.

Farden said that his 100th win was about the gymnasts not about himself.

“For me, it’s just a number,” Farden said. “It’s always been about the kids and the athletes and making sure that we’re doing a good job preparing them for competitions. Through your preparation [and] your planning, the wins are a by-product.”

Farden started gymnastics as a young child. He said he wasn’t a very good gymnast but decided that he wanted to make it his career.

“The fascination with how skills work and how preparation works and then multi facets of preparation: practice planning, sports psychology, strength and conditioning, flexibility, physical therapy, everything that embodies a complete athlete was totally fascinating to me,” he said. “I wanted to see if I could apply some of the principles that I’m constantly learning even to this day and see what happens.”

Freshman Abby Paulson is the sole Minnesotan on the Utes. Paulson is from Anoka, Farden’s hometown and both she and Farden are Anoka High School alumni. Paulson said she received recruiting letters from Utah at a young age and always had interest in the school and thinks its crazy that Farden has 100 wins only five seasons into his tenure.

“It’s something that’s so incredible and so fun to be a part of,” Paulson said. “It was a huge milestone. The fact that it was also the regular-season Pac-12 championship—it was two amazing things in one meet. The team made it even better. He didn’t even know it was going to happen.”

After the meet against Washington State, Utah gymnastics’ Twitter account tweeted that Farden had won his 100th meet at Utah with a graphic of him stretching his arms out triumphantly next to the words “Tom Farden—100 Wins at Utah.”

Paulson said Farden is a great coach because he cares about the Utes both as gymnasts and as women.

“He gives us whatever he needs equipment-wise,” Paulson said. “He’s there to support us through everything, making sure we have every possible opportunity to succeed. It’s amazing.”

The Utes program is one of the most successful in NCAA history. Since the Utah program began in 1976, the Utes have won nine NCAA titles and 10 national titles. However, Utah hasn’t won a national championship since 1995.

Farden said ending a 25-year NCAA championship drought would ignite Utah’s fanbase. The Utes have one regular-season meet remaining against Utah State on March 13 at Jon M. Hunstman Center in Salt Lake City. The Utes will then compete at the Pac-12 championships on March 21 at Maverik Center in West Valley, Utah.

“It would put the cherry on top of a very special year,” Farden said. “We lost arguably one of the best gymnasts in the history of NCAA gymnastics, Mikayla Skinner, as she takes a gap year for the Olympics. There was a lot of uncertainties. Everything works into process. The symphony is not tuned in tightly yet. As a conductor, there’s some things that we still need to be hitting on and timing. We’re going to try and narrow that down as we head into this last little bit of season, tighten some things up and make sure that the music we’re hearing is absolutely perfect.”