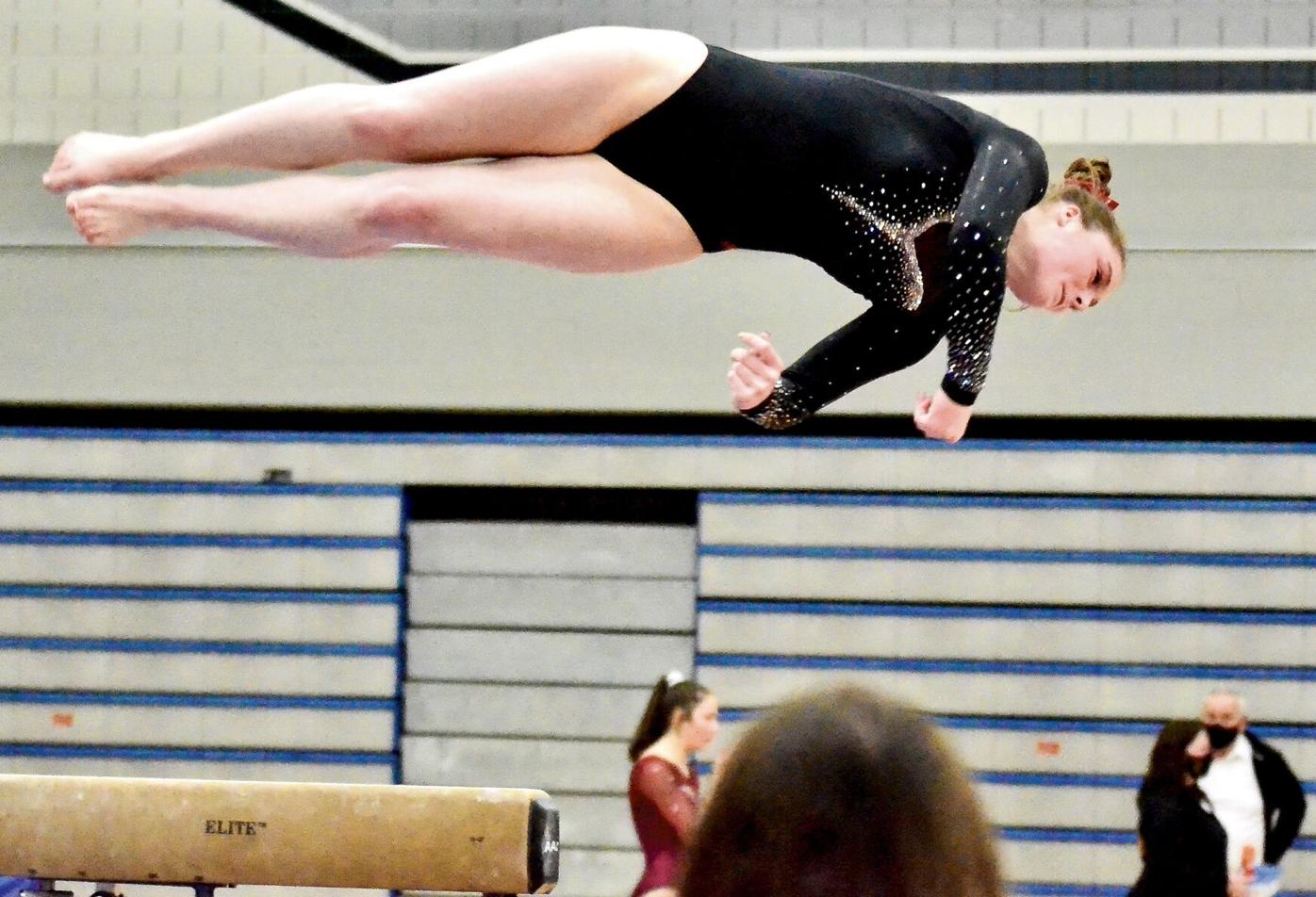 Elk River/Zimmerman junior Zoey Johnson finishes off her balance beam routine on Saturday, March 27 in the Class 2A state tournament at Champlin Park High School. Johnson received with a 9.025. 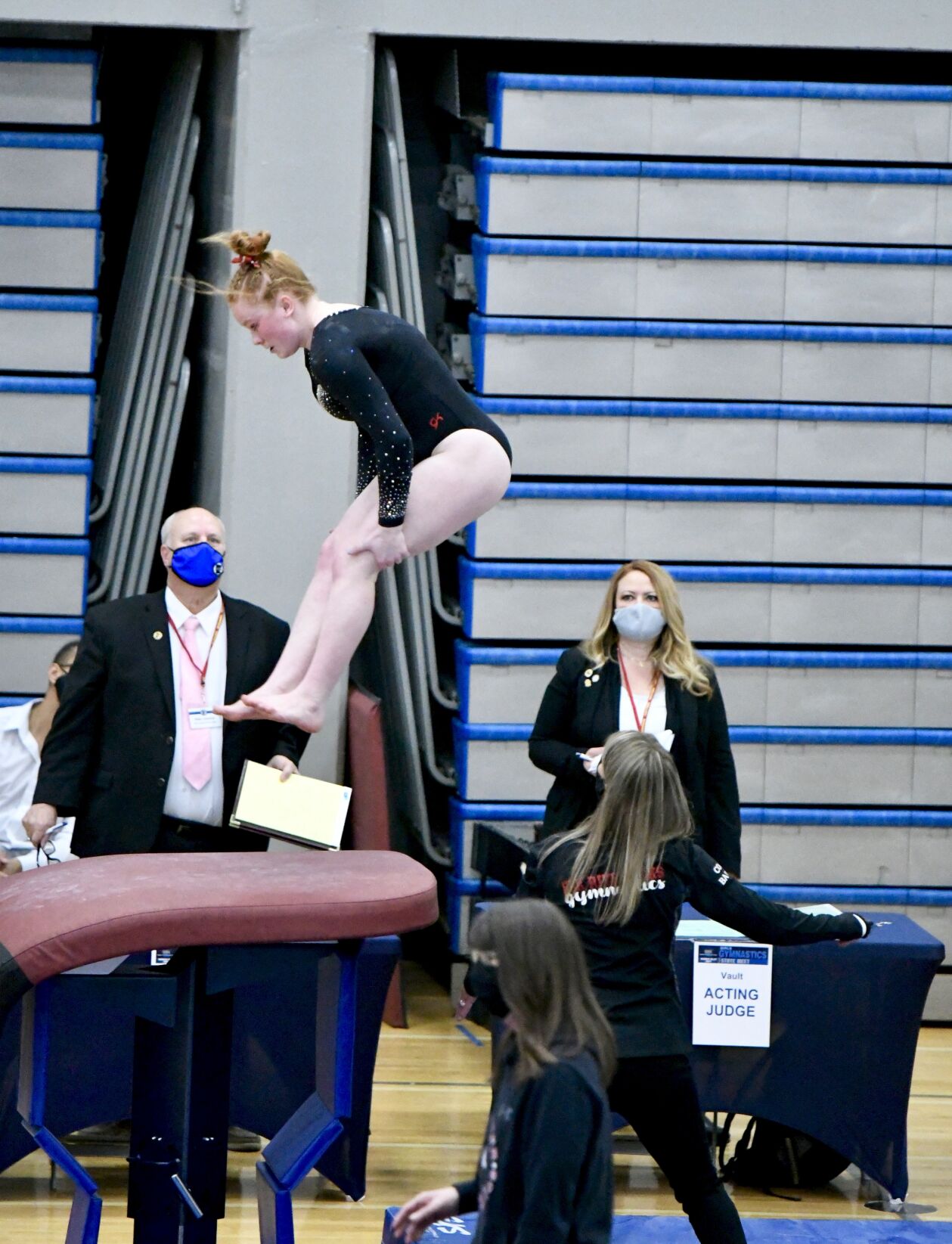 Elks junior Abby Rekstad leaps off the vault platform during the Class 2A meet on Saturday, March 27, at Champlin Park High School. Rekstad finished tied for 15th on vault in the individual competition with a score of 9.475 along with Stillwater Area freshman Katelyn McDowell.

Elk River/Zimmerman junior Zoey Johnson finishes off her balance beam routine on Saturday, March 27 in the Class 2A state tournament at Champlin Park High School. Johnson received with a 9.025.

Elks junior Abby Rekstad leaps off the vault platform during the Class 2A meet on Saturday, March 27, at Champlin Park High School. Rekstad finished tied for 15th on vault in the individual competition with a score of 9.475 along with Stillwater Area freshman Katelyn McDowell.

The Elks concluded the 2020-21 season with a seventh-place finish at the Class 2A state tournament on Saturday, March 27, at Champlin Park High School. The Elks received a score of 142.425, which was 1.15 points lower than what Elk River-Zimmerman received at the 2020 state meet. Last year, the Elks finished sixth at the Class 2A state tournament, receiving a score of 143.575.

“Some of our best routines of the year ended up going to balance beam,” Bartlett said. “It wasn’t our day like it was at Sections, but as we watched the state tournament, not a lot of teams did well on beam. We were still hanging in there after beam. We talked as a group and we mentioned we don’t take any negativity into the next event. We do a two-clap, we let it go. [We] went into floor, had great floor routines, actually some of the best floor routines we have seen all season. The scores didn’t fall our way. They [the judges] were pretty tight in their scoring on Saturday. We went into vault and actually scored our season-high team score on vault. We were happy [but also] sad that it was the final time competing with our senior captains Lexi Milless and Miranda Schwieger.”

The Elks began the meet on uneven parallel bars. Elk River-Zimmerman finished seventh on bars with a score of 34.6. Junior Ava Cole was the highest-scoring gymnast for the Elks, receiving a 9.

The Elks concluded the meet on vault. Elk River-Zimmerman tied for third with Owatonna with a season-high score of 37.425. Sophomore Jaelyn Sorenson was the top scorer for the Elks with a score of 9.3125. Schwieger scored a 9.2625.

Bartlett said Rekstad had a great performance on bars but that beam got the best of her.

“Four falls is hard to come back and try to get an all-around title or medal on that,” she said. “With that being usually her most solid event, it’s disappointing for her. We shed some tears but went on to the next couple of events and rocked floor and had one of her best vaults of the year. The scores didn’t reflect truly who she is and what she can do.”

Bartlett said Schwieger did an amazing job on vault in her last meet with Elk River-Zimmerman.

“Her leadership is quiet and mighty. She’s always the biggest cheerleader. She works hard for the team and picks them up when she feels she did bad for them. She always tries to make them feel better and keep pushing through. The funny thing is a lot of times when she thinks she’s done bad, she’s done really [well]. Her joy of gymnastics, her dedication to it, the dedication to this team, this program for the last five years—it’s going to be hard to replace. She’s a true teammate and a wonderful athlete to coach.”

Bartlett said she will also miss Milless and her presence on the team. In her final meet for the Elks, Milless received a score of 8.6875 on vault.

“She had been a solid starter on our vault rotation,” she said. “When you’ve only got one event that you’re doing and it’s the last event of the day and you’re the first one up for your team, we could count on her. That is wonderful for the team. The leadership component of that, also another big cheerleader on the team, has had five years on this program. She brings joy to us. She brings lightness. She’s the only gymnast in my coaching career that loses her voice at every meet and loved every second of it. We’re going to miss her, also. Both ladies are high honor students, 4.0 [GPA] and above and they’re both going into the medical field.”

Bartlett said she and the Elks are already excited about next season.

“The remaining crew will all be returning next year,” she said. “They all, before we even boarded the bus, started saying what their goals were. It’s a true testament to how these kids can just keep working for something even through adversity. When we finish, we start something new. We’re excited to start the ’21-’22 ERGT chapter.”