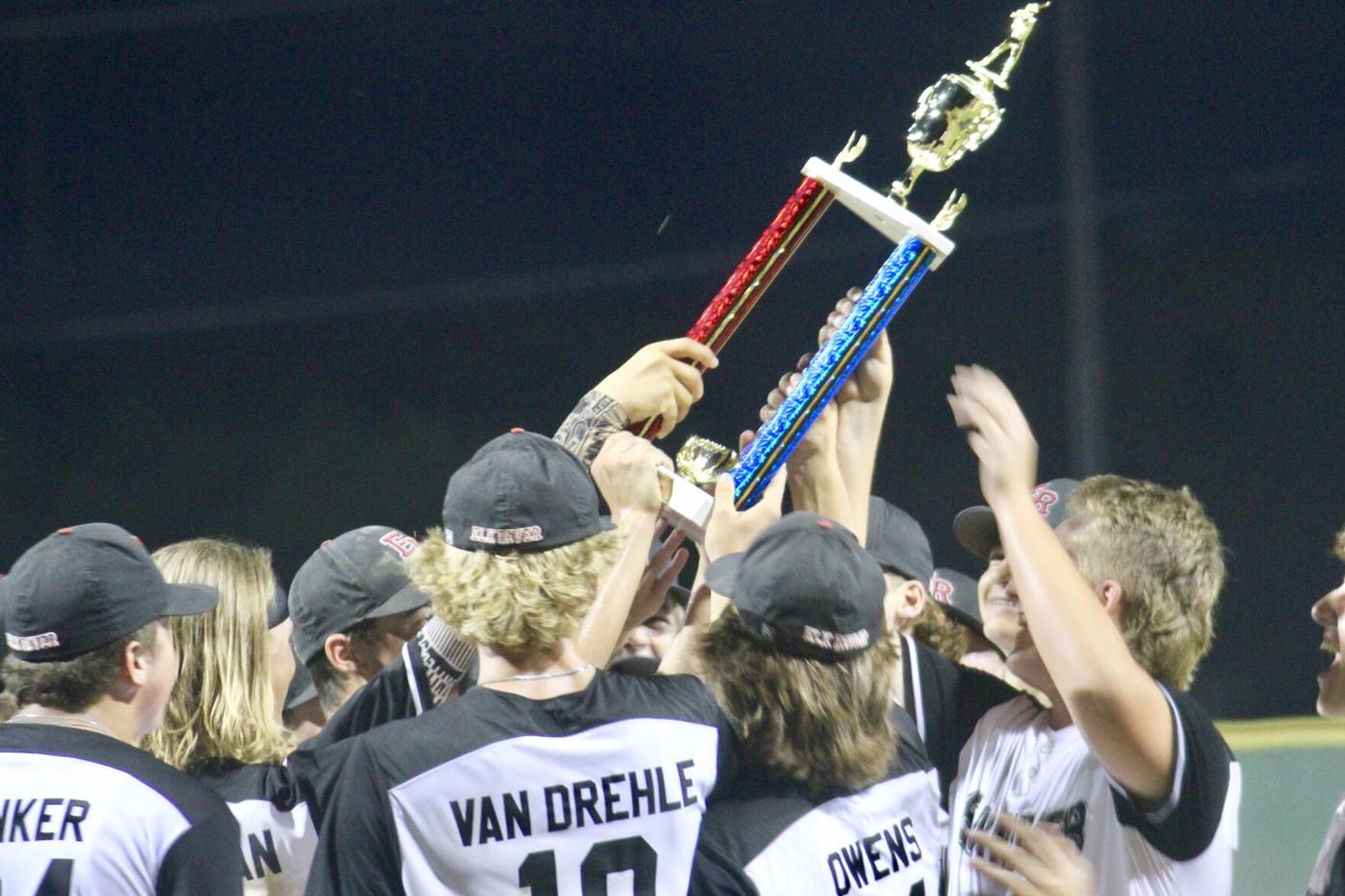 Elk River 19-U VFW baseball team hoists the 2021 VFW District 7 championship trophy following its 13-3 win over Maple Grove on Tuesday, July 27, at Osseo High School. Elk River advances to the 2021 VFW State Baseball tournament, which will begin on Sunday, August 15, at Marcusen Field in Austin. This will be Elk River's first appearance in the state tournament in 10 years. 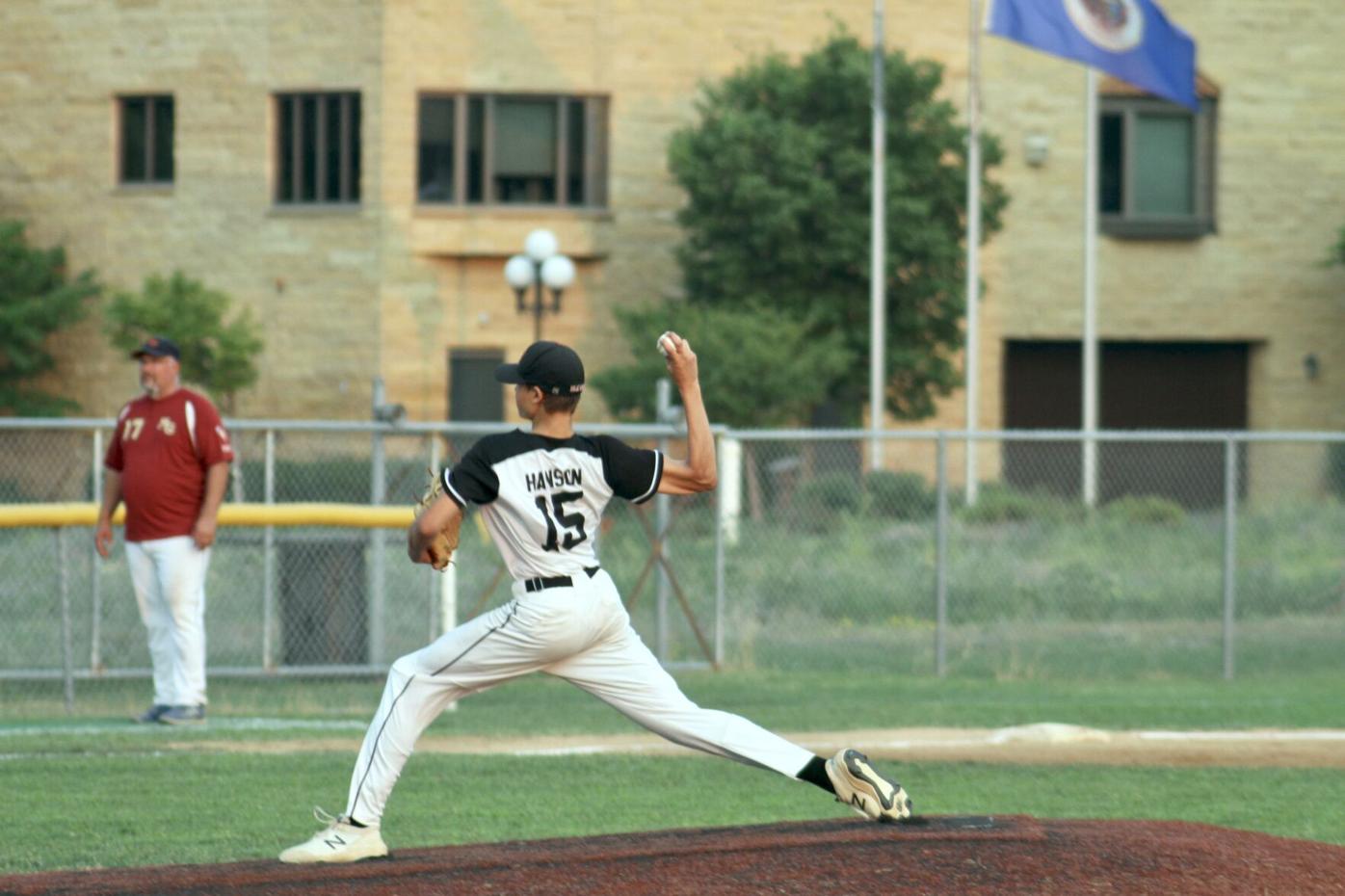 Elk River 19-U VFW baseball team hoists the 2021 VFW District 7 championship trophy following its 13-3 win over Maple Grove on Tuesday, July 27, at Osseo High School. Elk River advances to the 2021 VFW State Baseball tournament, which will begin on Sunday, August 15, at Marcusen Field in Austin. This will be Elk River's first appearance in the state tournament in 10 years.

For the first time since 2011, the Elk River 19-U VFW baseball team will play in the Minnesota VFW Baseball State Tournament.

Elk River head coach Ryan Holmgren said he talked to the team earlier in the season about what he thought the team could do. Holmgren has coached the U-19 team since 2012.

Elk River took a commanding 4-0 lead in the first inning. The inning was highlighted by a two-run double by shortstop Brett Groebner and a Maple Grove error.

Holmgren said he liked the way Elk River came out right away and swung the bats well.

“Our pre-game infield-outfield [batting practice] that we took before this game was the best one we’ve taken all year,” he said. “That showed me right away that these guys were locked in, ready to go, and then we came up in the bottom of the first and put up four runs. We did it by swinging at good pitches, by driving balls, by running and hustling and making good baserunning decisions. Those four runs—that was the difference right there. We came out ready to play.”

Elk River scored again in the bottom half of the third to make it 5-0 before Maple Grove cut the lead to 5-2 with a two-run fourth inning. Elk River responded with a run to make it 6-2.

Neither team could score in the fifth inning. In the sixth inning, after Maple Grove scored one run, the Elks exploded for seven runs and won the game after scoring the 13th run, winning in six because of the VFW’s 10-run rule.

After the game, both teams shook hands before Holmgren and Elk River accepted the championship trophy to the delight of the parents and other spectators who were in attendance.

Holmgren said Elk River bought into the things that he and assistant coaches Cole Groebner and Skip Swanson were asking them to do.

“We’ve got a lot of guys that have played a lot of successful baseball,” he said. “We got a core group of guys who won a state championship a couple of years ago as 13-year olds. We were asking them to do different things on the field. We were asking kids who had success to do something different, and they accepted that. They understood the importance of that and they understood the importance of how that was going to help them grow. We came back from a tournament in Marshall and we were 5-6 and we decided, ‘Alright, let’s go do this thing,’ and it caught fire. One win turned into two and then we started beating some good teams and look out, we go on a roll—16-3 in our last 19 games. It’s pretty impressive the way they came together and bought in what we were telling them to do in order to be successful. That’s the fun part about this.”

“The key to our offense that we’ve been on this run in the postseason is that we’ve been balanced up and down the lineup. Our bottom third of our order was as productive as our top third or our middle third. We don’t have a lot of guys who stand out individually, but the order we put together and the balance that we have, it’s tough [to pitch against].”

Holmgren said he saved Hanson for the championship game.

“I told him, ‘You’re our No. 3 guy,” Holmgren said. “The way this thing’s shaping up, you’re going to throw a big game for us. We had a guy going that controlled the game for six innings. You hold that team to five hits and three runs through six innings; that’s pretty impressive.”

Elk River advances to the Minnesota VFW state baseball tournament for the first time since 2011. Elk River’s first-round opponent in the state tournament has yet to be determined. The state VFW tournament begins on Thursday, August 12, and runs through Sunday, August 15, the day of the championship game. All games will be played at Marcusen Park in Austin.

Holmgren said he hopes that Elk River will continue the momentum they created in the District 7 tournament into the state tournament next month.