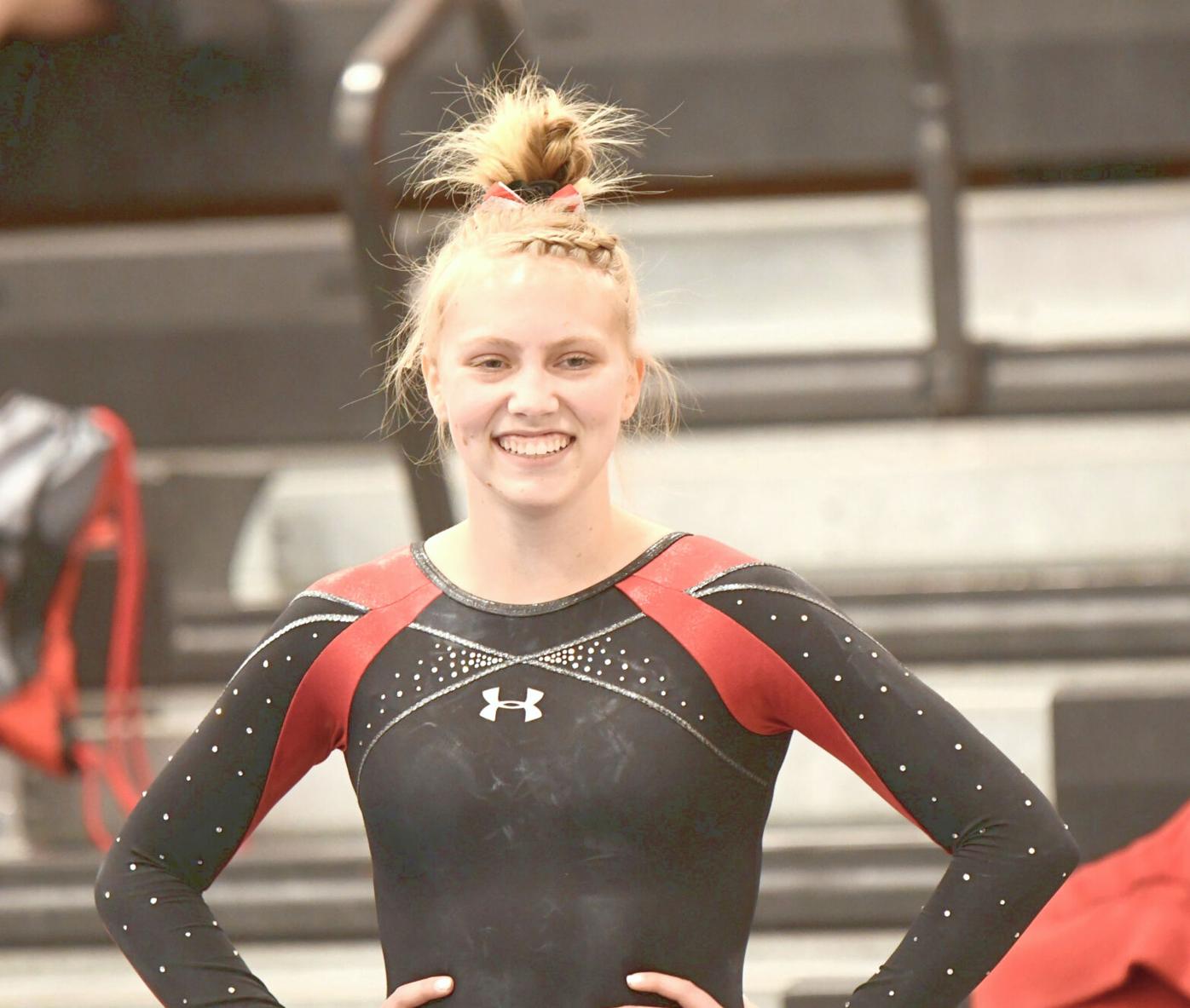 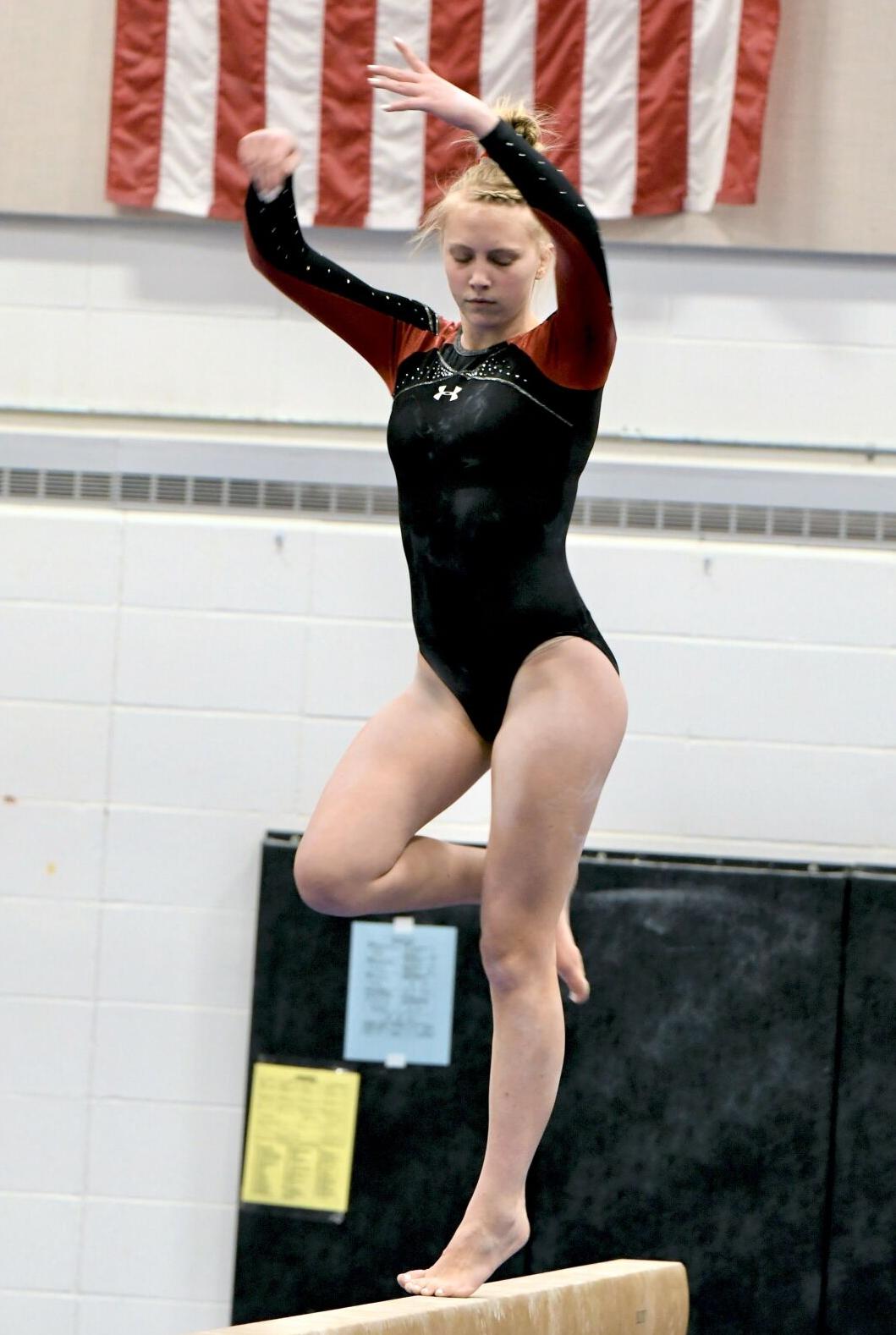 Elks senior gymnast Miranda Schwieger competes on beam during Elk River's 139.05-137.8 win over Maple Grove on Tuesday, Feb. 16, at Elk River High School. Schwieger tied for ninth place with a score of 8.35. She is Zimmerman High School's 2020-21 Athena Award winner, which is given to the most outstanding female athlete at many Twin Cities high schools since 1972. 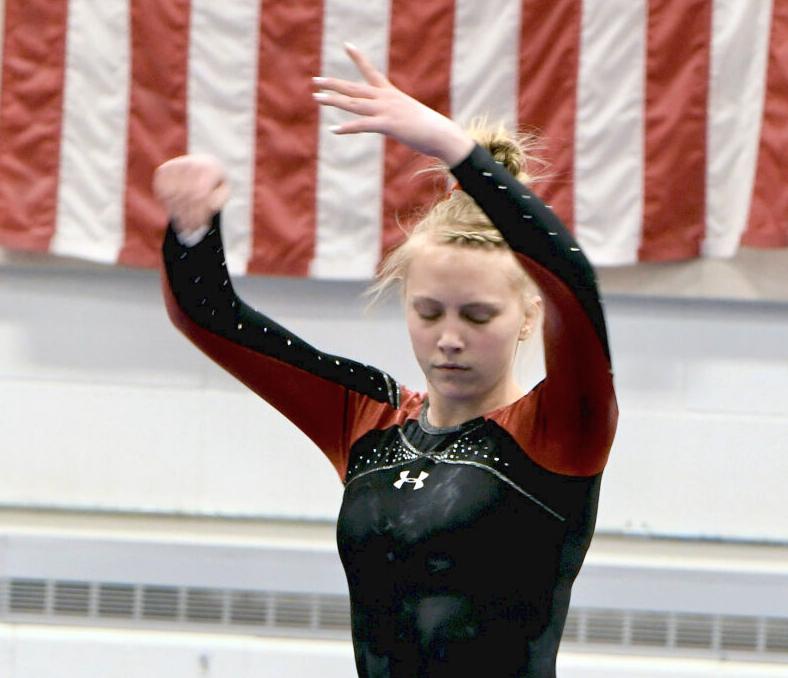 Elks senior gymnast Miranda Schwieger competes on beam during Elk River's 139.05-137.8 win over Maple Grove on Tuesday, Feb. 16, at Elk River High School. Schwieger tied for ninth place with a score of 8.35. She is Zimmerman High School's 2020-21 Athena Award winner, which is given to the most outstanding female athlete at many Twin Cities high schools since 1972.

Many high school athletes play one sport. Some play multiple sports over multiple seasons. For Zimmerman senior Miranda Schwieger, she belongs in the latter category.

Schwieger is a senior gymnast for the Elk River gymnastics team and played soccer as a forward for the Zimmerman girls soccer team from 2016-2020. This year, Schwieger received Zimmerman’s Athena Award, which is given to an outstanding female athlete based on achievements and excellence in athletics, with other criteria such as academics, community service and other extracurricular activities as secondary determining factors. The Minneapolis Athena Awards were established in 1972 by the Sports and Attraction Committee of the Women’s Division of the Greater Minneapolis Chamber of Commerce to recognize Twin Cities female high school athletes.

Elk River gymnastics head coach Jennifer Bartlett has known Schwieger since she was about 3 years old. She said Schwieger has done a great job with the Elks.

“This has been a fun journey to watch, not that I was her coach the whole way through,” Bartlett said. “Female sports, of course, have the growth spurts, and Miranda has taken each growth spurt by the horns and worked her way through it. That determination and grace as well as her work ethic is crazy. It’s the best work ethic I’ve ever met in my life. When she puts her mind to it, she goes for it.

“Yes, she’s her worst critic, but the progression from when we started five years ago to now, she’s a stronger athlete now not only in her skills, but in her role as a leader on our team. It’s fitting that she was captain last year and now captain this year because she does push these kids to be better, even that means taking a spot away from herself because she knows it makes the team better. That is a true testament of a leader and a true testament to her of what she sees this whole team doing. Watching her determination and her drive have been my favorite moments of coaching her.”

Schwieger said her biggest inspirations as a gymnasts are her Elks coaches: Bartlett and assistant coaches Margaret Mize-Schwieger, Cassi Sanford and Tobby Stroud.

“I know I’m one of my worst critics,” she said. “They help me to get that inspiration to better myself.”

Bartlett said Schwieger is not a year-round gymnast and has been successful through hard work and determination.

“Everything that you see out there has been something that she’s done during the season and off and on in the summers,” she said. “She is a multi-sport athlete, a high-level student-athlete and a fantastic auntie to her nephews.”

In her 2020 senior season for the Thunder, she played in 13 matches and scored one goal, recorded three assists and had four shots-on goal. Zimmerman finished the 2020 regular season with a record of 9-2-0 and reached the semifinal of the Section 7A tournament, losing 3-0 to Cloquet-Carleton on Monday, Oct. 19, 2020, at Egerdahl Field in Proctor.

Thunder girls soccer head coach Jeff Downing said Schiweger has made a positive impact in the Elk River and Zimmerman communities not only through her academic and athletic achievements, but her dedication to community service.

“This is evidenced even in her part-time employment as a PCA [personal care assistant],” he said. “She could have easily landed a job in a retail store or fast-food facility, but her nature is to serve others. Miranda is a great role model for teammates demonstrating positive attitudes in competition as well as practice.”

Bartlett said Schwieger is a determined student-athlete. In the classroom, Schwieger has a GPA of 4.113 and is rated No. 2 in the Zimmerman High School Class of 2021.

“She works hard at everything that she does,” Bartlett said. “She is willing to go above and beyond for the little kids, helping them with reading and being an example. She works in a group home on the weekends, so she’s selfless. Everything that she touches is done with love, passion and determination.”