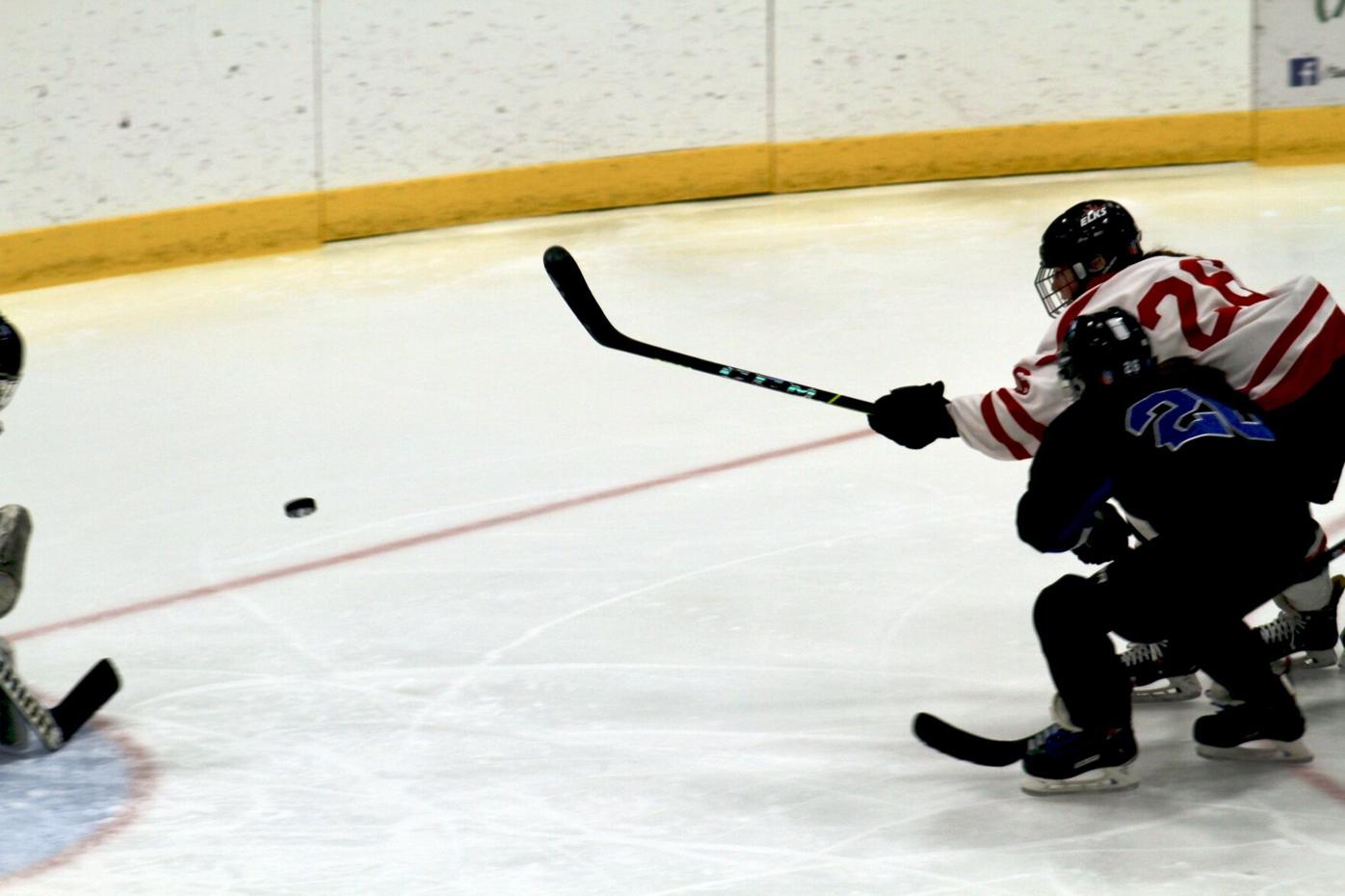 Elk River junior forward and co-captain Maddy Christian backhands a shot past Rogers sophomore goaltender Lauren Larson during the third period of the Elks' 6-2 win over the Royals on Friday, Feb. 5, at Furniture and Things Community Event Center in Elk River. It was Christian's third goal of the game, completing a hat trick. She would score again later in the third period for a four-goal, five-point game. 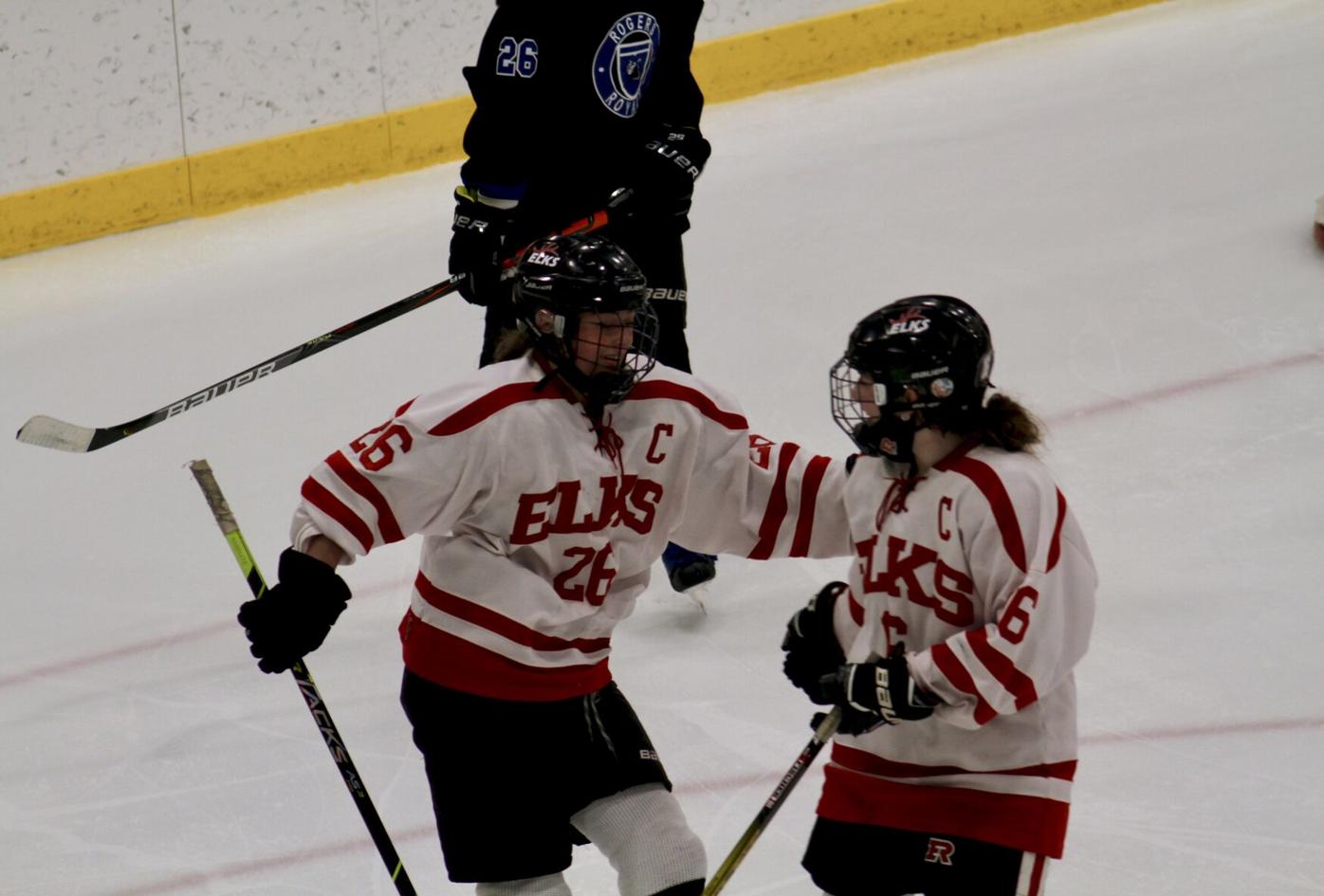 Elk River junior forward and co-captain Maddy Christian backhands a shot past Rogers sophomore goaltender Lauren Larson during the third period of the Elks' 6-2 win over the Royals on Friday, Feb. 5, at Furniture and Things Community Event Center in Elk River. It was Christian's third goal of the game, completing a hat trick. She would score again later in the third period for a four-goal, five-point game.

Many children in Minnesota start to learn to skate at a very early age. Elk River junior forward Maddy Christian is no exception.

Christian, who has been playing for the Elks since 2017-18, began skating when she was 6 years old when she learned how to figure skate. Her father, Matt Christian, convinced her to give hockey a try. Matt Christian played for the University of Minnesota-Duluth and University of Alaska-Anchorage men’s hockey teams in the 1990s.

“I was also a gymnast and a dancer, so I was under the girly sports, you could say,” Maddy Christian said. “My dad finally convinced me to try hockey skates, and I remember the first time I was very hesitant and I did not want to get on the skates. I got on the ice and I was crying and all that stuff. The second time, I was like, ‘Oh, this isn’t bad.’ I fell in love with it and keep improving from there.

“I’ve always looked up to my dad because he played [NCAA] Division I hockey and then he played semi-pro over in Sweden. He always taught me rights from wrongs growing up. He’s always taught me how to play the game correctly. He’s not been hard on me, but he’s been stern with what I need to do to get better, and with my mentality, I respect that because I need someone to push me to the limit to get me to go or things like that. He always loved me for whatever I’ve done. He’s supported me through everything, and I respect that.”

“Every time she steps onto the ice, she tries to better herself and get better,” Ballenger said. “Since she was an eighth grader, she’s gotten faster. Shes’ gotten stronger. She has truly become a top-flight, elite high school hockey player in Minnesota. I firmly believe that. She hasn’t gotten some of the recognition in previous years, but for sure this year, she’s starting to make her mark. The Penn State offer and her accepting that says all that.”

Maddy Christian’s favorite hockey player is women’s hockey star and Plymouth native Dani Cameranesi, who won a gold medal with Team USA at the 2018 Winter Olympics in PyeongChang, South Korea. Cameranesi was named Minnesota Ms. Hockey in her 2012-13 senior season at Blake and won a pair of national championships with the University of Minnesota women’s hockey team in 2015 and 2016.

“My mom used to adjust her [skates] all the time,” Maddy Christian said. “I would just grow up watching her work out, watching her skate and, finally, watching her on [Team] USA winning a gold medal. I look up to her a lot. I’ve talked to her a few times. She’s so nice.”

Maddy Christian said her favorite memory of playing for the Elks these past four seasons has been playing with future collegiate stars Madison Bizal of Ohio State and Kelsey King of Minnesota State-Mankato.

“Now, this year, I’m playing with my best friend, Cora [Coz], who’s a senior,” Maddy Christian said. “I’ve grown up with her since I first started playing hockey.”

Christian has a plan for life after Elk River High School. When she was 15 years old, she committed to play for Penn State University. Christian will don the navy and white Nittany Lions uniform following her senior season with the Elks next fall. Her favorite subjects in school are math and science.

“I’m in biology right now,” she said. “I’m enjoying it and learning about different aspects of it. My idea for a major is pre-med because I’ve always wanted to be a surgeon, but now I’m kind of leaning towards becoming an ER doctor. That’s my idea for now.”

“She’s [Christi Christian] always helped me more with my body and my health,” Maddy Christian said. “She tells me what [are] the right foods to eat before a game. My uncle also played at UMD. He stayed at UMD while my dad went to [the] Seawolves. He’s also helped me with a few things. I remember we went up to Duluth one year [for a hockey game], and my dad was supposed to be on bench, but [Marc Christian] showed up and everyone was like, ‘Oh, my goodness!’ That day, he showed me how to take faceoffs, and I will never forget how to take a faceoff. From that moment, I feel like I keep getting better and better.”

Ballenger said Christian is a phenomenal person who has matured since her eighth grade 2017-18 season.

“Successful programs are only as successful as its players and its leaders,” he said. “Maddy has grown as a leader. She’s one of our captains this year. She was an assistant captain last year. Her voice in games, in the locker room is so important. As it relates outside of hockey, the girls, not this year [because of COVID-19], are expected, in order to letter, to be involved in [the] community and taking part in community service events, whether that’s in youth hockey but also outside of youth hockey. Maddy is actively involved in all of those things. You see the caring soul and the caring individual that she is. She truly cares about everybody that’s come in contact with her life and is appreciative for all of those things.”