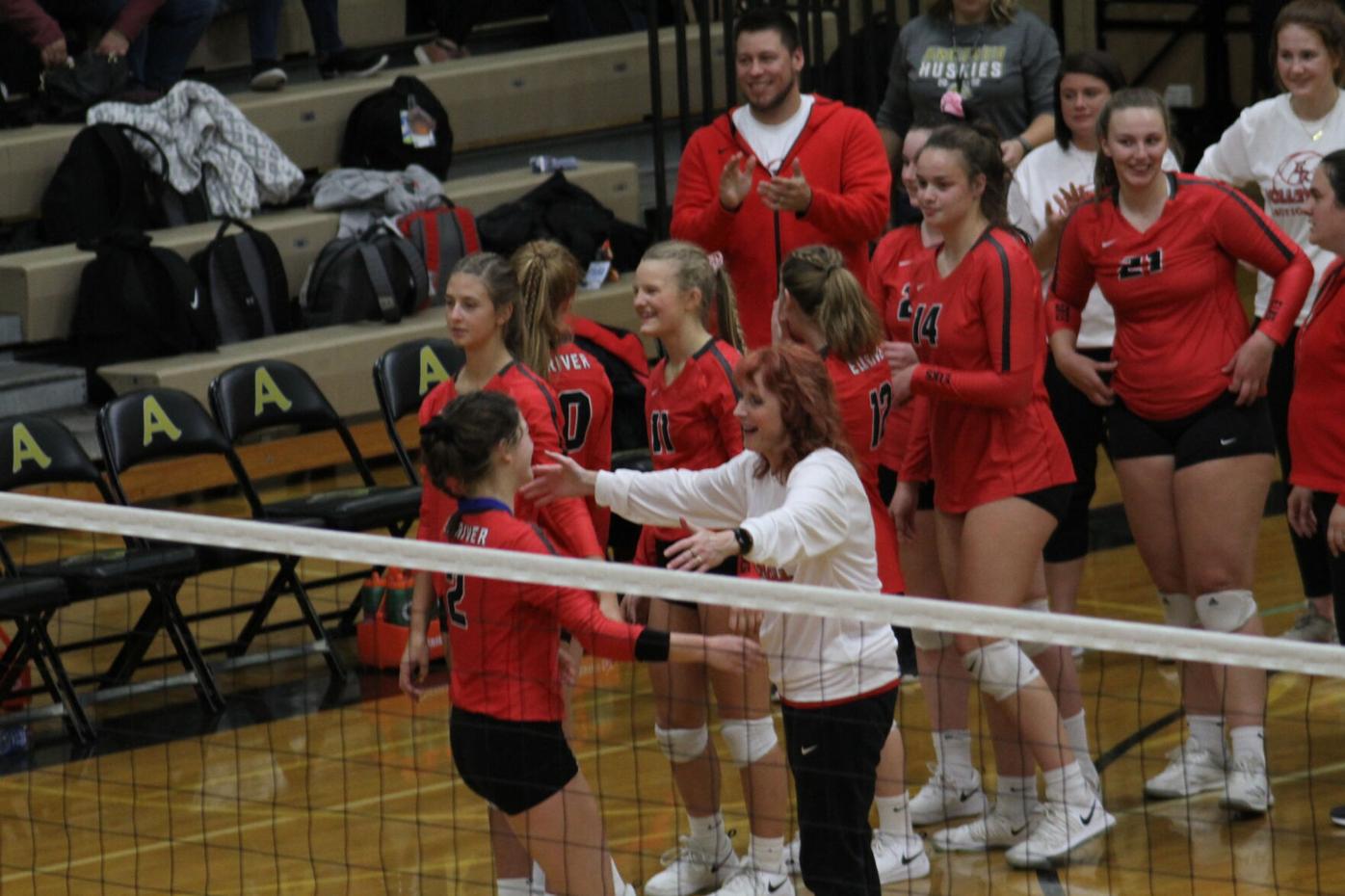 Elk River volleyball head coach Theresa Brummer hugs 2019 senior Clare Hillary on Nov. 2, 2019 after the Elks defeated Forest Lake 3-0 in the Section 7-3A final to advance to the state tournament for the first time in program history. 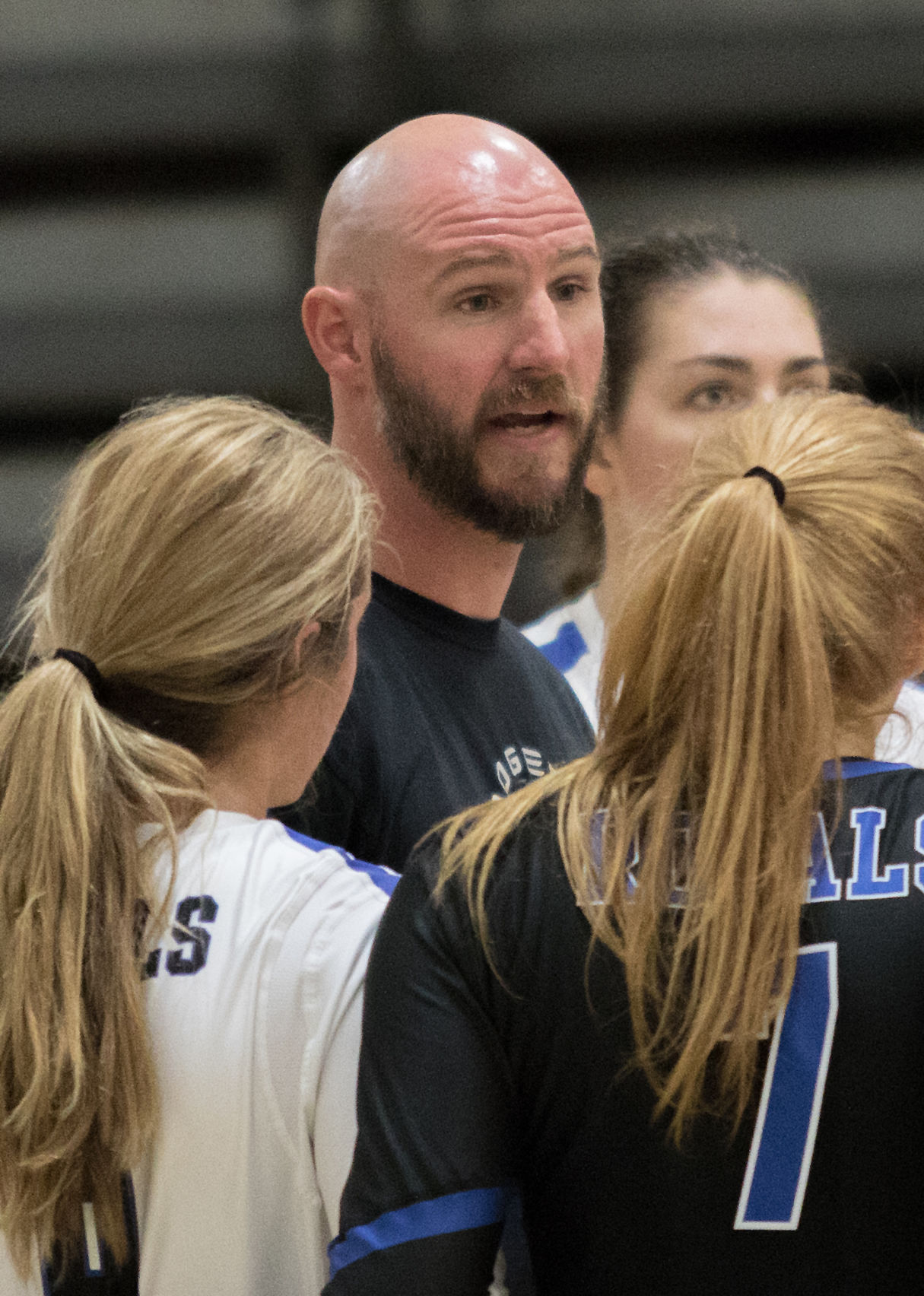 Rogers volleyball head coach Bo Schmidt talks to his players during a time out during Rogers match against Orono on Aug. 23, 2018 at Rogers High School. Schmidt and the Royals won 3-0 over the Spartans in Schmidt's first game as head coach. 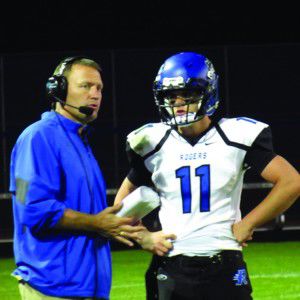 Elk River volleyball head coach Theresa Brummer hugs 2019 senior Clare Hillary on Nov. 2, 2019 after the Elks defeated Forest Lake 3-0 in the Section 7-3A final to advance to the state tournament for the first time in program history.

Rogers volleyball head coach Bo Schmidt talks to his players during a time out during Rogers match against Orono on Aug. 23, 2018 at Rogers High School. Schmidt and the Royals won 3-0 over the Spartans in Schmidt's first game as head coach.

Originally the Minnesota State High School League, which has been in existence since 1916, reversed its Tuesday, Aug. 4 decision to postpone high school and volleyball to this spring on Tuesday, Sept. 22. No fans will be allowed inside volleyball matches and capacity for football games will be capped at 250 people.

Unlike 2018 and 2019, there may not be a Prep Bowl or State tournament this fall. The MSHSL website has not posted information about possible dates  for fall tournaments. The 2020 football season will begin on Friday, Oct. 9 and will last six games, with the last games scheduled for Nov. 28, the Saturday after Thanksgiving. The volleyball season will begin on Oct. 8 with an 11-week season with 14 matches. Zimmerman volleyball will make its debut this season. The Thunder, coached by Leah Driessen, will open their season on Thursday, Oct. 8 against St. Cloud Cathedral at 4:15 p.m. at St. Cloud Cathedral High School.

Rogers football head coach Marc Franz said he was excited when he heard about the MSHSL’s decision to reinstate football for the fall but was also nervous about whether or not the season could be completed. Franz is entering his 18th season as head coach of the Royals, a position he has held since the team’s inaugural 2003 season.

“Hopefully, it plays out [well] with everybody staying healthy and being able to play and schools don’t have teams forfeiting because of positive tests,” Franz said.

Elk River volleyball is coming off of a historic 2019 season which saw the Elks advance to the state tournament for the first time in school history. The Elks open the 2020 season against Centennial on Tuesday, Oct. 8 at 7 p.m. at Elk River High School.

Elks head coach Theresa Brummer said planning this season has been a whirlwind and is excited to open the season on Oct. 8.

“It makes more sense,” Brummer said. “We most likely would have had difficulty fielding a high school team in the spring.  The MSHSL did not approve the waiver to allow players to play high school and club.  We have many players that are involved in club ball. With the exposure that club ball affords the athlete, it really puts hometown teams in jeopardy without a waiver. The players were thrilled.  They want the best of both worlds- to play club and represent their hometown team.  They are very excited to hit the courts.”

Rogers volleyball head coach Bo Schmidt said he didn’t like the MSHSL’s decision at first, but once he saw that the Royals players were overjoyed, they changed his mind. The Royals will open their season on Thursday, Oct. 8 against Armstrong at 7 p.m. at Armstrong High School.

“It wasn’t until I got home and got to practice on Tuesday [Sept. 22] and saw how excited the girls were for the season to get started [in October] that started to change my attitude for what was to come. There was a lot of work. It was an incredibly busy week this week and going into next week is going to be equally busy with tryouts and everything else, but we’re excited. I’m glad that we’re playing this fall. I think that’s good for the sport. Spring would’ve been a tough season to figure out logistically.”

Franz and Rogers open the program’s 18th season against a familiar opponent: Elk River. The Royals and Elks will battle it out on Friday, Oct. 9 at 7 p.m. at Elk River High School. The teams split their two 2019 games, but the Elks eliminated the Royals in the Section 6-5A semifinal with a 20-14 win on Oct. 26, 2019 at Rogers High School.

Franz said the Royals are thrilled to play the Elks to open their season.

“We have a history of great competitive games,” he said. “I don’t expect anything different this year. I’m glad to see them early in the season because I’m hoping were able to run the entire course of the season, but you never know.”