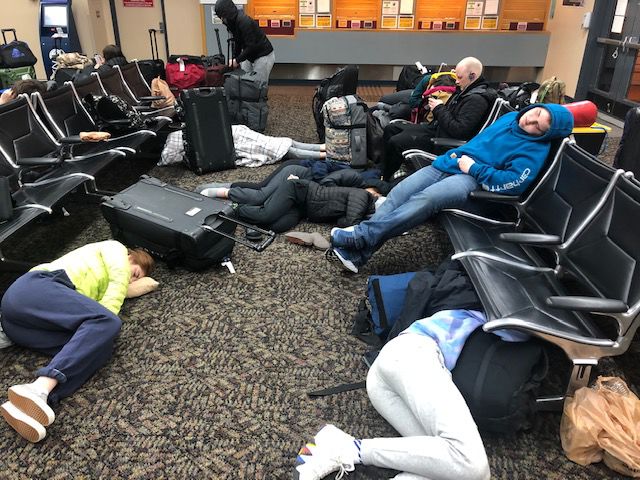 Members of the Skagway, Alaska boys and girls high school basketball teams sleep at the Ketchikan Ferry Terminal in Ketchikan, Alaska. The teams were scheduled to return on Jan. 26, but due to a fuel leak on a major highway and ferry repairs, they did not return home until Jan. 28. 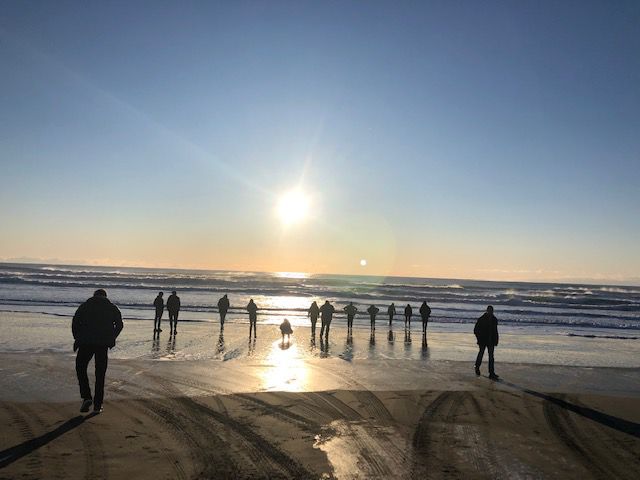 Members of the Skagway, Alaska, boys and girls basketball teams stand at a beach in Ketchikan, Alaska.

Members of the Skagway, Alaska boys and girls high school basketball teams sleep at the Ketchikan Ferry Terminal in Ketchikan, Alaska. The teams were scheduled to return on Jan. 26, but due to a fuel leak on a major highway and ferry repairs, they did not return home until Jan. 28.

Members of the Skagway, Alaska, boys and girls basketball teams stand at a beach in Ketchikan, Alaska.

Ross Barrett, a 2005 alum of Elk River High School, is in his first season as head coach of the Skagway High School boy’s basketball team in Skagway, Alaska. The team’s nickname is the Panthers. Skagway is a small town located about 103 miles northwest of Alaska’s capital, Juneau.

On Jan. 26, the Panthers were scheduled to come home from Juneau by ferry and later by bus when blizzard conditions and an avalanche risk forced all modes of transportation in Skagway to a halt.

Andrew Cremata, the mayor of Skagway, said in a story published by CBC News on Jan. 27 said the town was “officially isolated.”

Barrett said all of Skagway’s away games require travel by airplane or by ferry because each of the communities where team’s in the Panthers’ conference play have no roads.

“It was hard for the kids, especially at the tail end,” Barrett said. “We were on the road for two weeks. We’d all bunk up in the same room.”

The team would sleep in school classrooms, cafeterias and gymnasiums. The Panthers spent the night of Jan. 25 sleeping on the floor of the ferry terminal in Ketchikan. Barrett said that the players not only fell behind in school, but in their other activities such as band or robotics.

“They were all ready to get home,” Barrett said. “It was deflating to know that they wouldn’t be home for a few days.“Prior to the practices even, we only had two weeks to prepare for all of those games. They’re more used to it than I am, but I see a large disadvantage comparing time traveling to time practicing.”

According to the same story published by the CBC on Jan. 27, the Klondike Highway north of town had been closed since Jan. 25 when a fuel truck clipped an ore truck that was pulled over on the side of the road. The collision caused a rupture in the fuel truck’s tank. Cremata said between 1,100-1,800 liters, or between 290.59 and 475.51 gallons of fuel spilled.

The team tried multiple ways to get home. Barrett tried to book flights, but they were backed up. A small ferry was scheduled to take the team home on Jan. 26, but Cremata and Josh Coughran, the superintendent of Skagway Public Schools, convinced Barrett and the Panthers to not take the risk.

Thousands of miles from home in Minnesota, Barrett’s sister Megan was worried and anxious for her brother to return home safe.

“We just felt bad for them because of the extent of their travel,” Megan Barrett said. “Our whole family was bummed out.”

“Luckily, we got a window in the weather,” Ross Barrett said. “We got pretty lucky there. I’ve been in Alaska for a little over a decade now. I’ve learned a lot of patience with traveling. You can never really depend on flying. The pilots are great.”

Skagway hired Ross Barrett after former head coach Scott Lesh announced that he was retiring before the start of the 2019-20 season. He was hired in November 2019. The Panthers are currently 9-5. Ross Barrett said he wants the team to learn and grow and not be too focused on the results in his first season as bench boss.

“I’m teaching them a brand new system. Ultimately, the goal is to keep processing [new information] and to keep getting better and better. We’ll be pretty tough next year.”

Megan Barrett said she was relieved to learn that her brother arrived home unharmed. She said she is very supportive of Barrett’s career.

“The weather is so unpredictable up there,” she said. “We were worried about it, waiting for that message. We were relived when we finally got a picture. We all grew up playing basketball. To see him continue to pass that on to the boys in Skagway…I’m proud of him and I’m happy that he’s able to do that.”