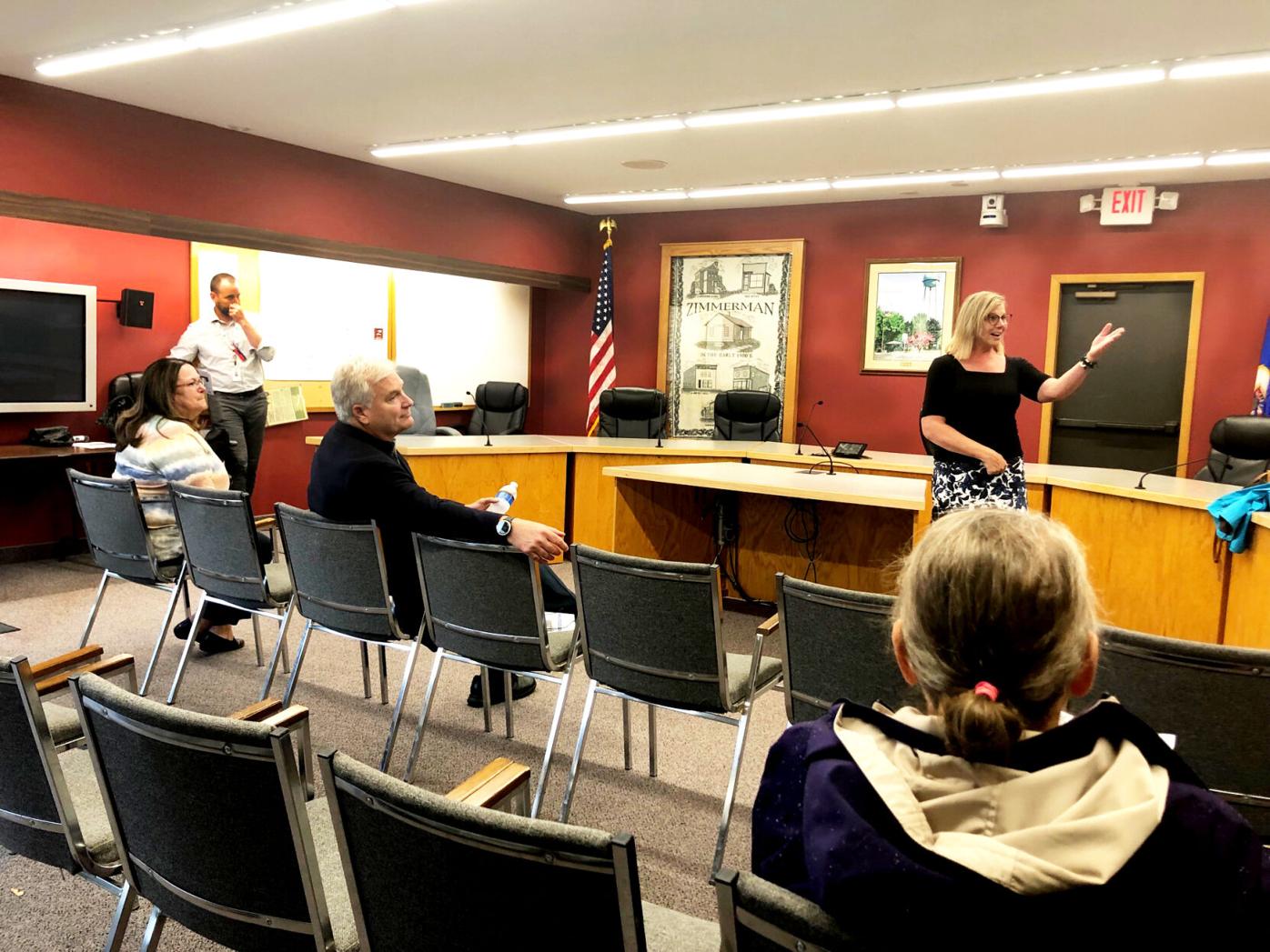 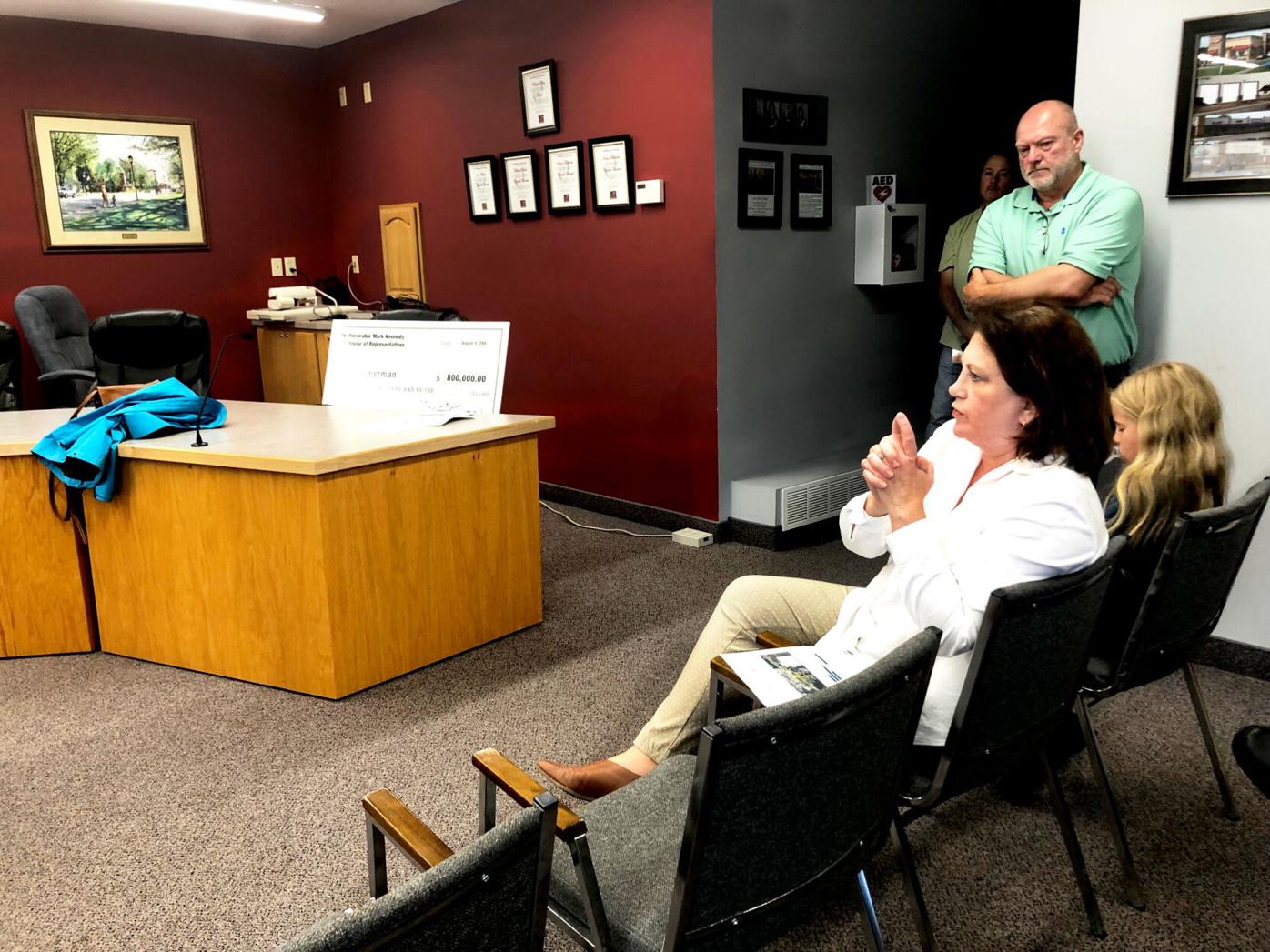 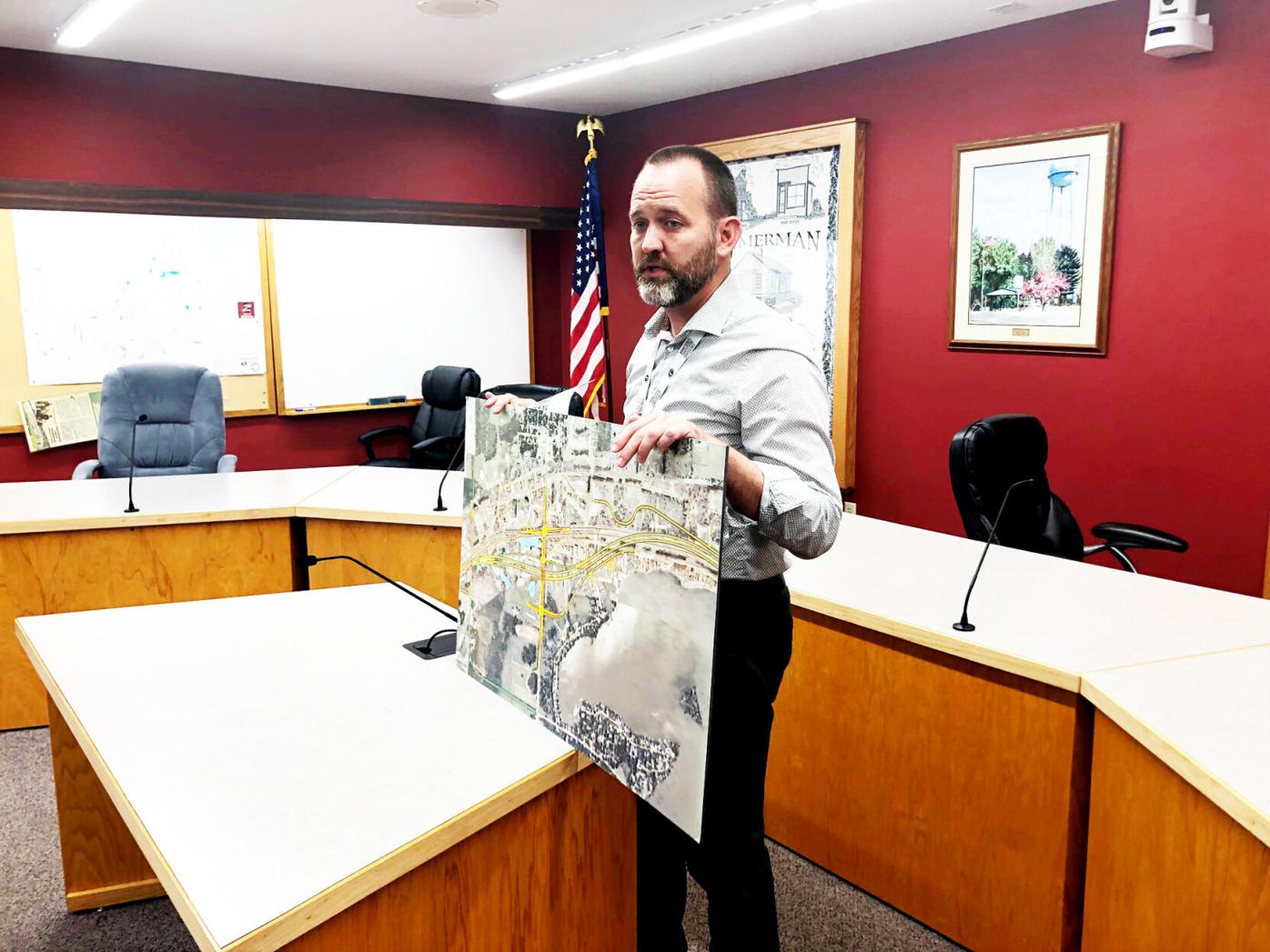 Traffic from the Fourth of July holiday weekend continued to stack up in Zimmerman on the evening of Tuesday, July 6, as officials from Sherburne County and the city of Zimmerman made their case for a grade-separated interchange for the umpteenth time.

Their target on Tuesday was a receptive Congressman Tom Emmer, who used the stop at Zimmerman City Hall and a subsequent visit to intersection itself as a strategy session for him and other officials on how to best position its request to get the federal government to fund 60% percent of a project at this point that is estimated to cost of $44 million. He indicated that he considers securing funds for a project like this his constitutional duty.

Sen. Michelle Benson, R-Ham Lake, was there, as were Sherburne County Commissioners Lisa Fobbe, Tim Dolan and Barb Burandt as well as County Board Chairwoman Raeanne Danielowski. So too were the top administrators for the county and city (Bruce Messelt and Randy Piasecki) and Sherburne County Public Works Director Andrew Witter.

Intersection has been radar for many years

The project has been on the radar of local, state and federal officials since mid-2000 when an $800,000 check was ceremonially passed from the hands of then-Congressman Mark Kennedy to local officials. That money went to a Highway 169 corridor study that produced a gameplan. The construction project, however, never followed sut. Two factors that worked against the project being achieved were the economy that soured and the collapse of the I-35W bridge on Aug. 1, 2007. Priorities shifted to bridge work, and funding streams tightened in the face of a bad ecomony.

Officials are pounding the pavement again, this time with even greater urgency as the safety of the intersection is four times worse than that of similar intersections in the state as it relates to crash rates and crash severity. The suspicion is it will get a whole lot worse when the Highway 169 Redefine, a project to turn Highway 169 in Elk River to a freeway, is completed.  Five sets of stoplights will be removed and replaced with grade separations to keep traffic moving through the city.

The lighted intersection at Sherburne County Road 4 and Highway 169 in Zimmerman will become the only one in a 75-mile stretch between Interstate 94 in Rogers and Mille Lacs Band of Ojibwe casino.

Fobbe mentioned an air ambulance helicopter had to be summoned the Thursday before after a crash there.

“This is a huge safety issue,” Fobbe said. “If nothing else because of capacity. I think our volume has doubled.”

Attracting and retaining industry to large tracts of land that are available for development has been made difficult. Some businesses have left, including a Fairview Clinic.

Dolan said safety and commerce issues have a spillover effect.

The city and county were awarded $2 million last year in state money to complete design work. Officials say the project in Elk River and the proposal of one in Zimmerman could be very complementary and perhaps even worked on and completed as early as 2024 and 2025.

While safety is the biggest reason for the request, but there are many other reasons officials told Emmer.

“We’re coming to you,” Fobbe said to Emmer. “This is a major thoroughfare for people and freight, as you know. This is a commuter area. People love to live out here. They feel safe and they want to move out of the cities or suburbs a little bit and have a little land, but then they have to commute to the work.”

Piasecki said there are also a lot of people from Greater Minnesota moving closer to the Twin Cities who like landing in a spot like Zimmerman. Economic development, however, has been hindered by a lack of mobility to get trucks in and out of the city in a timely fashion.  Making matters worse, Piasecki said, is the uncertainty of the future of this intersection.

“I think our economic development in the area has also been hindered,” Fobbe said. “People don’t know what’s happening here. In 2005 we knew. We had it all set, and then it crashed and nothing else has come (to Zimmerman).”

Starting in 2022 and continuing in 2023 and 2024, Highway 169 in Elk River is going to be redone. The state has awarded $157 million to the Elk River project from Corridors of Commerce funding mechanism.

“With all the improvement, people will get up to their cruising speed and then all of a sudden (have to slow down),” Danielowski said. “It creates this huge backlash, where you hope nobody rear ends you because they weren’t paying attention.”

County officials and commissioners have been meeting with key state officials, making sure there’s a high awareness of the need.  Unfortunately, the county learned the week before the meeting with Emmer that they were denied a major grant that they had sought, making the second one in a couple years they have been denied. Witter said they will be submitting this week for another grant.

Witter said to be clear this section of Highway 169 is not just used by locals and regional traffic. He said motorists from 76 of 87 counties travel 169 every day.

“This is an important intersection and interchange for the whole state,” Witter said. “Freight traffic and recreational travel is amazing.”

“We have had user accounts of having to wait through seven light cycles,” Witter said.

Emmer said he has had plenty of experience driving through Zimmerman and to Zimmerman to visit with family and to attend a few football games between Delano and Zimmerman.

He said Congress was doing its job better back in the 2000s, until it weaponized the earmark discussion.

“It should have reformed,” he said.

Local officials have an advocate in Emmer, he said.

“I believe it is our constitutional obligation to secure whatever resources are available for our people at home,” he said. “It’s one of the reasons you send us.”

He said he even chides some of his conservative colleagues to read Article 1 of the Constitution. “ ‘You are the one who determines where the money goes,’ ” he says to them.

He said block grants have been used but don’t always get the money where it should be going. Emmer applauded the work of folks like Benson and Sen. Mary Kiffmeyer for their work on Corridors of Commerce as a means to get the funding sources away from the bureaucratic process.

Emmer said before Corridors of Commerce funding came into existence, the heaviest traveled freeway was I-94 from Maple Grove to Monticello and it was it was only scheduled for repavement.

At the federal level he said he has championed community funding that gets to where it’s needed most and for mostly transportation projects.

The good news, he said, is this project is on the radar. The bad news he said is there’s a lot of uncertainty in Washington with the money going out for the recovery act and the squabbles and the digging of heels into the sand going on in the Democratic Party.

“In light of all the money that has been flooded out into the environment, I don’t know what will happen in the next few weeks,” he said.

Witter said the county expects to see a 40% growth in traffic over the next 20 years.

Piasecki has been with the city of Zimmerman since 1994 — 10 years after it went from stop signs to stop lights — when it was a town of 1,300. He said that was proposed as a solution, but it turned out to be a problem.

He said the Zimmerman area is not a little town. It has in excess of the 6,000 people and so does Livonia Township that surrounds it.

He said the roadway splits the city into one-third on the east to two-thirds on west because it’s so difficult to get across and access amenities like Grams Regional Park and the Great Northern Trail.