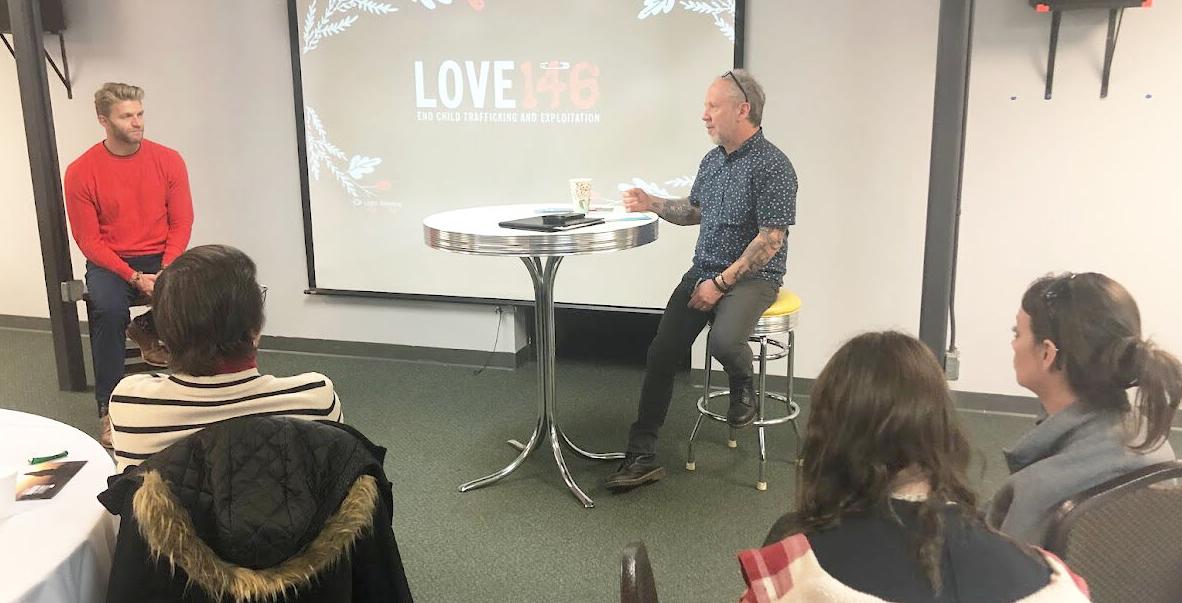 Central Lutheran Church Senior Pastor Ryan Braley (at left) introduced Rob Morris and helped facilitate a question-and-answer session after the Connecticut man talked about Love 146 and its work in Asia, the United Kingdom and the United States. 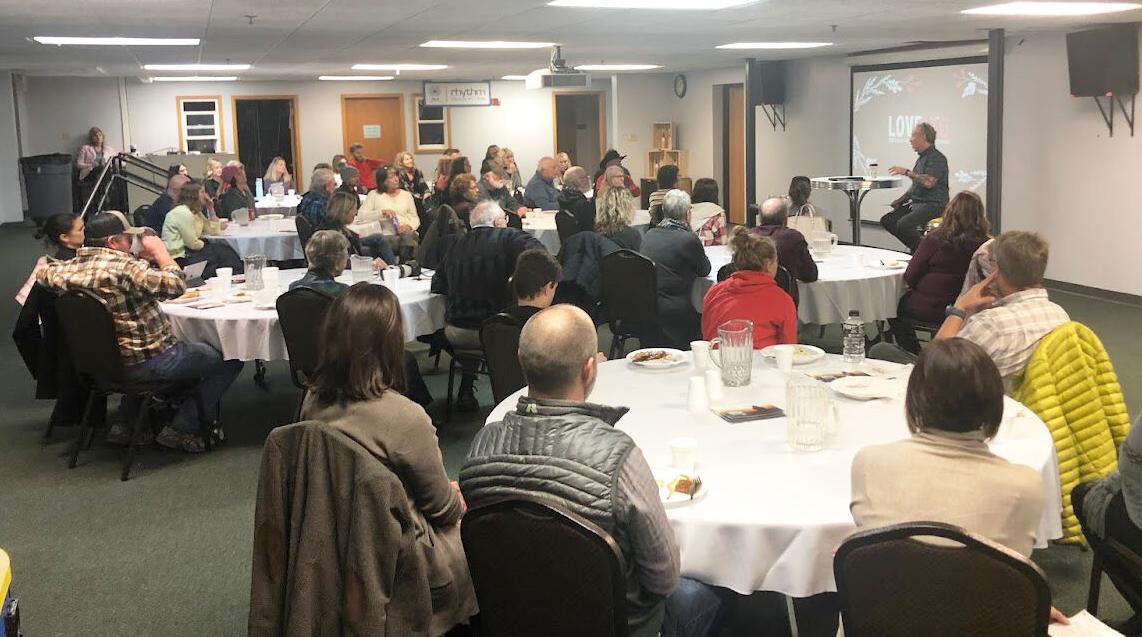 Rob Morris, the CEO and founder of Love 146, a nonprofit that has developed Survivor Care and a “Not a Number” curriculum to prevent sex trafficking spoke in Elk River on Nov. 14 on the topic of child exploitation.

Central Lutheran Church Senior Pastor Ryan Braley (at left) introduced Rob Morris and helped facilitate a question-and-answer session after the Connecticut man talked about Love 146 and its work in Asia, the United Kingdom and the United States.

Rob Morris, the CEO and founder of Love 146, a nonprofit that has developed Survivor Care and a “Not a Number” curriculum to prevent sex trafficking spoke in Elk River on Nov. 14 on the topic of child exploitation.

People heard from CEO of nonprofit Love 146, an organization that fights exploitation of children in Asia and the United States

Rob Morris, the founder and CEO of Love 146, was in Elk River this past weekend to share about his group’s work to end sex trafficking.

He spoke during Central Lutheran Church’s three services on Nov. 14, and to a group of more than 50 adults — a mixture of people from the church and the community at-large who came to learn more and see what can be done locally in the fight.

Running for Justice, a local nonprofit, that has been addressing human trafficking for years locally and in Thailand, paid for the program and a catered lunch by Seranno Brothers Catering. The group holds an annual Running for Justice 5K.

Ryan Braley, the senior pastor at Central, crossed paths with Morris, who lives in Connecticut, and invited him to come to Minnesota to speak.

The size of the crowd was impressive to Morris, who has been at this endeavor for more than 20 years.

“This is encouraging,” he said to the group in youth room with table-top games pushed to the side to make space for enough tables and chairs. “Especially since this (forum) is being held in a church saying it wants to open itself up to the community for people who care about children and want to protect them.”

He remembers the day 20 years ago when a meeting at the United Nations only attracted a handful of people representing a handful of countries.

“Now there are weeklong conferences with sessions (to pick from),” he said. “If we had a meeting like this (in Elk River) 20 years ago, we could have met in a car.”

Awareness has grown, and progress remains slow, he said. Sometimes the movement takes steps back when misinformation and falsehoods circulate about the issue of human trafficking.

Morris reported this past Sunday Minnesota has been more proactive than other states, and notes it has even been written about by the Harvard Public Health Review.

He explained during his talk that the Minnesota Student Survey, given to students in ninth and 11th grades, included a question to its tri-annual survey in 2019 to measure the prevalence of the sex trade in the state. It asked students if they have ever traded sex or sexual activity to receive money, food, drugs, alcohol, a place to stay or anything else. It was discovered that 1.4% said yes to the question, which represents at a minimum 5,000 children in those two grades who were in school that day and answered in the affirmative. Some might have been gone, no longer in school or reluctant to answer out of shame or fear.

“Kudos to Minnesota for asking the question,” Morris said.

Morris said he has encountered many affluent communities where people say sex trafficking is not happening in their community.

“I’m telling you that is not true,” Morris said. “The work we have done in the United States and just in the small state of Connecticut alone, where we have provided direct services to more than 500 children who have been confirmed or suspected of being involved in sex trafficking, tells me so. For anyone to say it’s not a problem is a bit naive. It’s important that we grasp that. That’s when meaningful responses come about.”

Love 146’s “Not a Number” curriculum has been used in 22 states in America, including Minnesota. More than 67,000 students completed the curriculum.

Minnesota passed Safe Harbor legislation in 2011, which added the definition of sexually exploited youth in Minnesota’s child protection codes; increased the penalties against commercial sex abusers or purchasers; and directed the Commissioner of Public Safety to work with stakeholders to create a victim-centered, statewide response for sexually exploited youth.

If youth engage in conduct that relates to being hired, offering to be hired or agreeing to be hired by another individual to engage in sexual conduct, they cannot be charged with a crime for this act.

To be considered victims rather than criminals, services are opened up to them rather than automatically sending them to juvenile hall to be with those who have committed crimes.

Morris asked the crowd of 50-plus adults if they were aware of this, and the vast majority were not. He said legislation like this is rarely marketed well.

In 2016, Safe Harbor services were made available to individuals 24 and younger, increasing the prior eligibility age for services from 18.

No Wrong Door is a comprehensive, multidisciplinary, and multi-state agency approach. It ensures communities across Minnesota have the knowledge, skills and resources to effectively identify sexually exploited and at-risk youth. Youth are provided with victim-centered, trauma-informed services and safe housing.

This has resulted in 50 grantees providing services, Morris said.

There have been 186 facilitators trained to work with schools, child welfare and juvenile justice agencies. They have reached 1,600 youth with help from 133 professionals, including social workers and teachers and others.

These efforts are making a difference he said, noting that he hopes to see Love 146’s Not a Number curriculum spread in Minnesota.

Love 146 remains focused on the child

To keep the group at Love 146 centered, Morris said its leadership focuses on the human beings that are at-risk, exploited and in recovery.

In his work in Asia and here in America, he has witnessed recovery. One of the first signs of recovery for children who have been victims of exploitation happens when the child can dream again about their future.

The first steps to recovery are painfully slow.

“If I survived today, that’s a good thing,” Morris said of children he witnessed in the early stages of survivor care in the countries of Asia, the United Kingdom and the United States.

In the Philippines, there is a home for those who have been exploited with the hope of nursing them to recovery. Morris has been amazed by the work being done and often brings colleagues there to learn and be inspired.

This facility, a round home with no sharp edges and no corners, built on a beautiful tract of land with volcanoes and tropical trees off in the distance, includes a tree house where therapy is done.

“The tree house, located two stories up, represents freedom and being above the circumstances they have experienced and the way it was meant to be.”

One of the exercises for the children at the facility is to have them develop dreams and state them out loud.

Morris has heard children on the road to recovery express dreams for the first time since they were exploited. Simple dreams like “turning 18 and having people recognize my birthday and celebrate it.” Another was to graduate high school and be able to receive their diploma. And perhaps the most profound was to get married to a man who would value her and love her the way she should be loved and valued. She acted out her dream by holding a pretend bouquet of flowers.

“To see a girl who one day covered her eyes so tight, pretending to hold a bouquet in her hands on her wedding day and marry a wonderful man who loves and values her the way she should be loved and valued was such a privilege,” Morris said.

Morris later said, “We are all much more than the worst thing that has ever happened to us.”

Not all victims of sex trafficking who go through Survivor Care have fairy tale endings, though. Many don’t.

One of Morris’ colleagues who had lost a family member to horrific circumstances said Love 146 is not just about triumphs.

Morris challenged the group in Elk River remain engaged, to continue to learn and refuse to be a bystander.