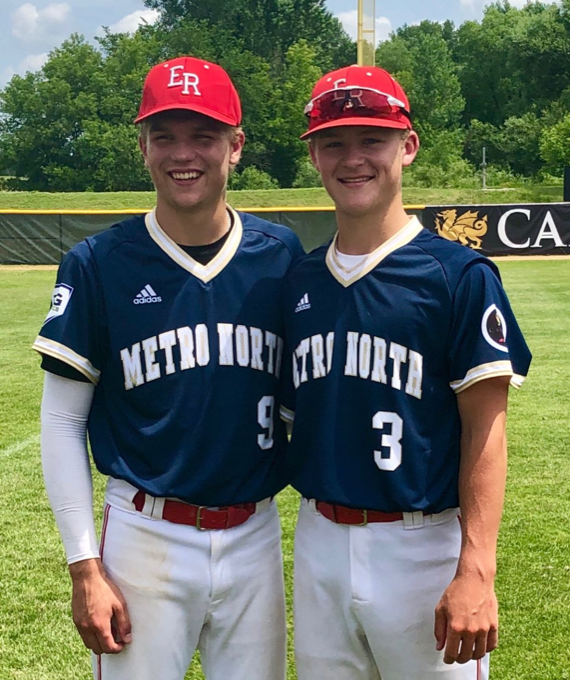 For the first time in school history, Elk River had two players represent them at the Play Ball! All-Star Series in Kyle Esperum (left) and Charlie Eldredge (right). 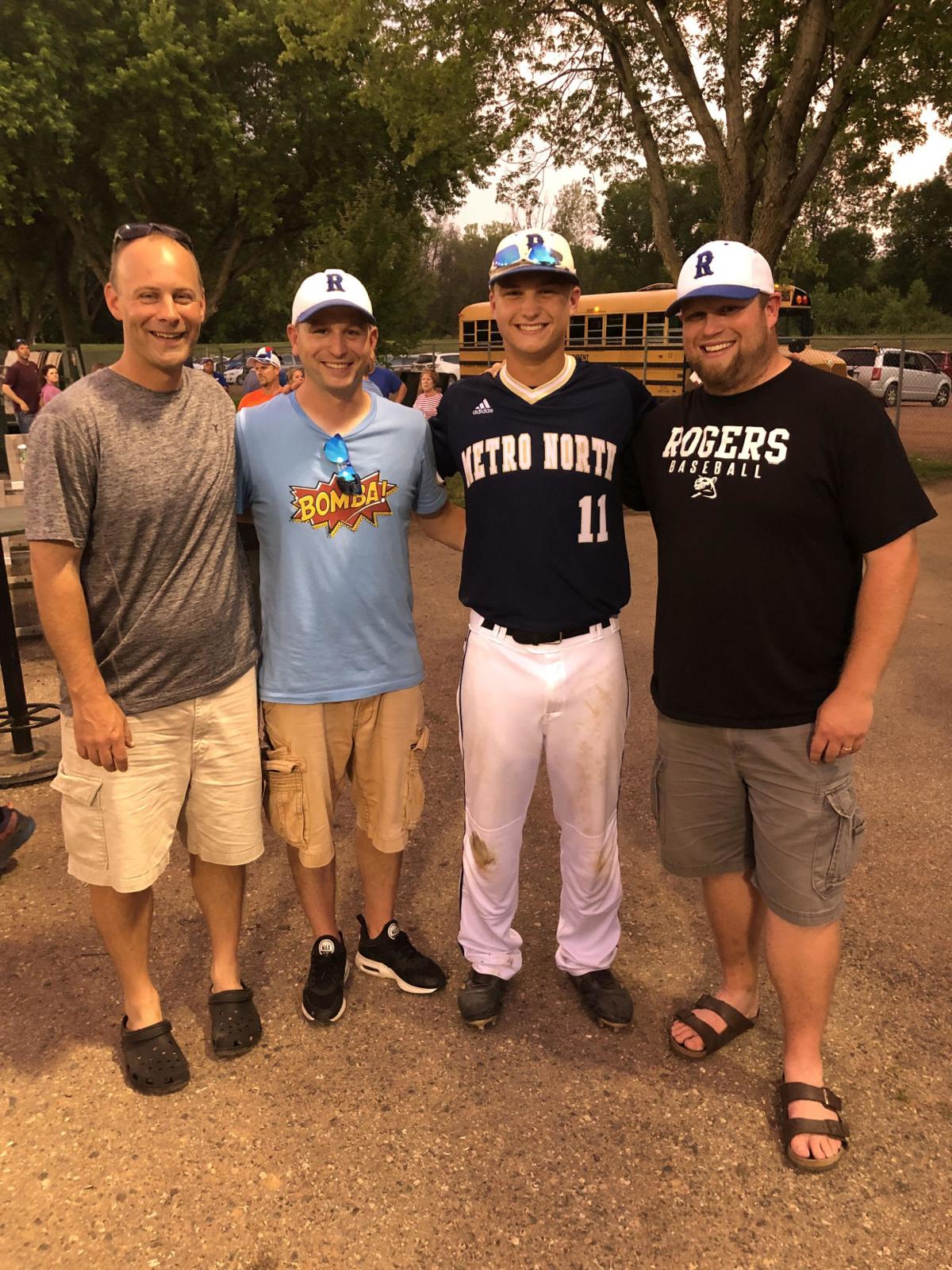 The Rogers coaching staff came to support Reed Olson, who was the first player from the school to make the Play Ball! All-Star Series. 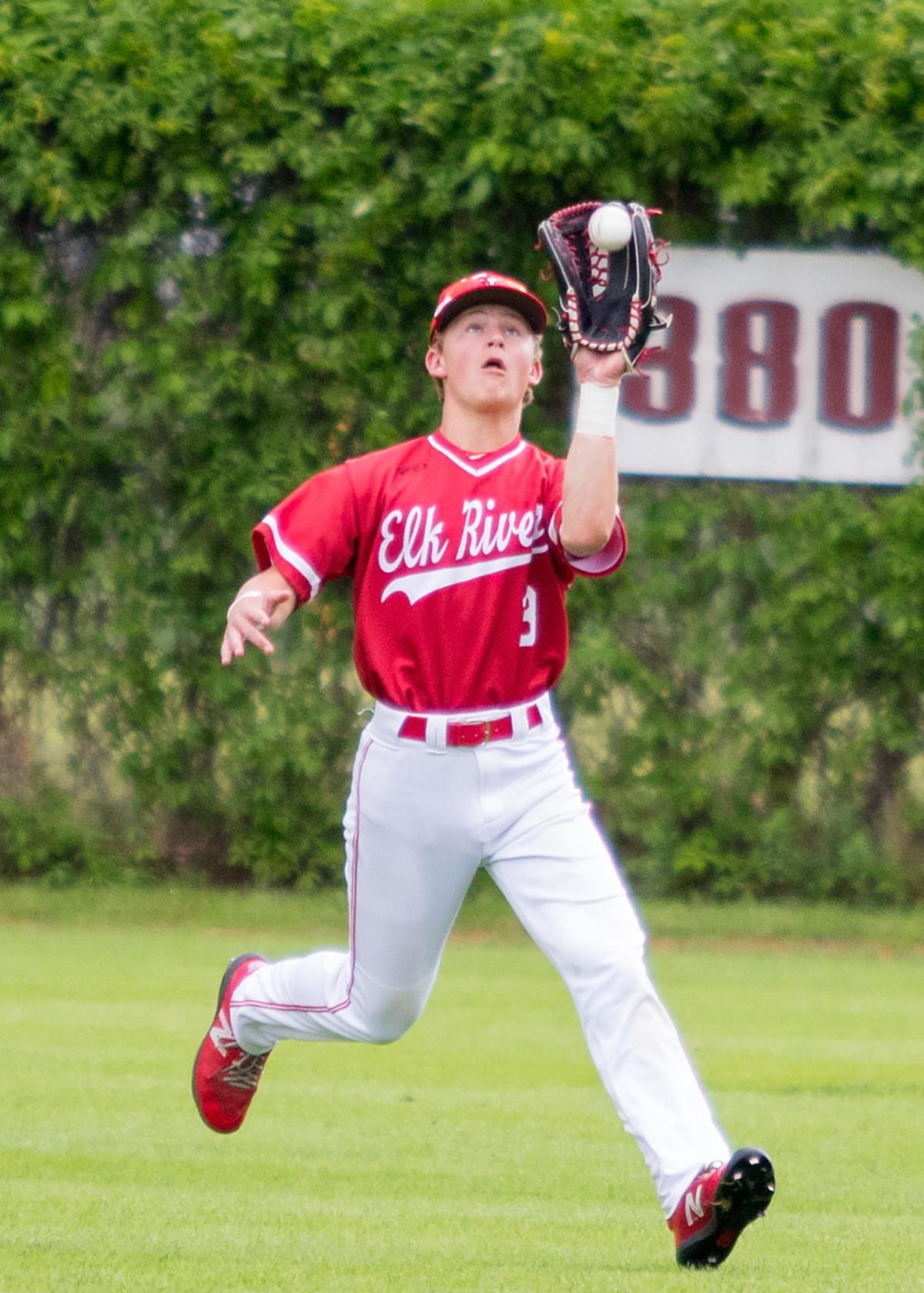 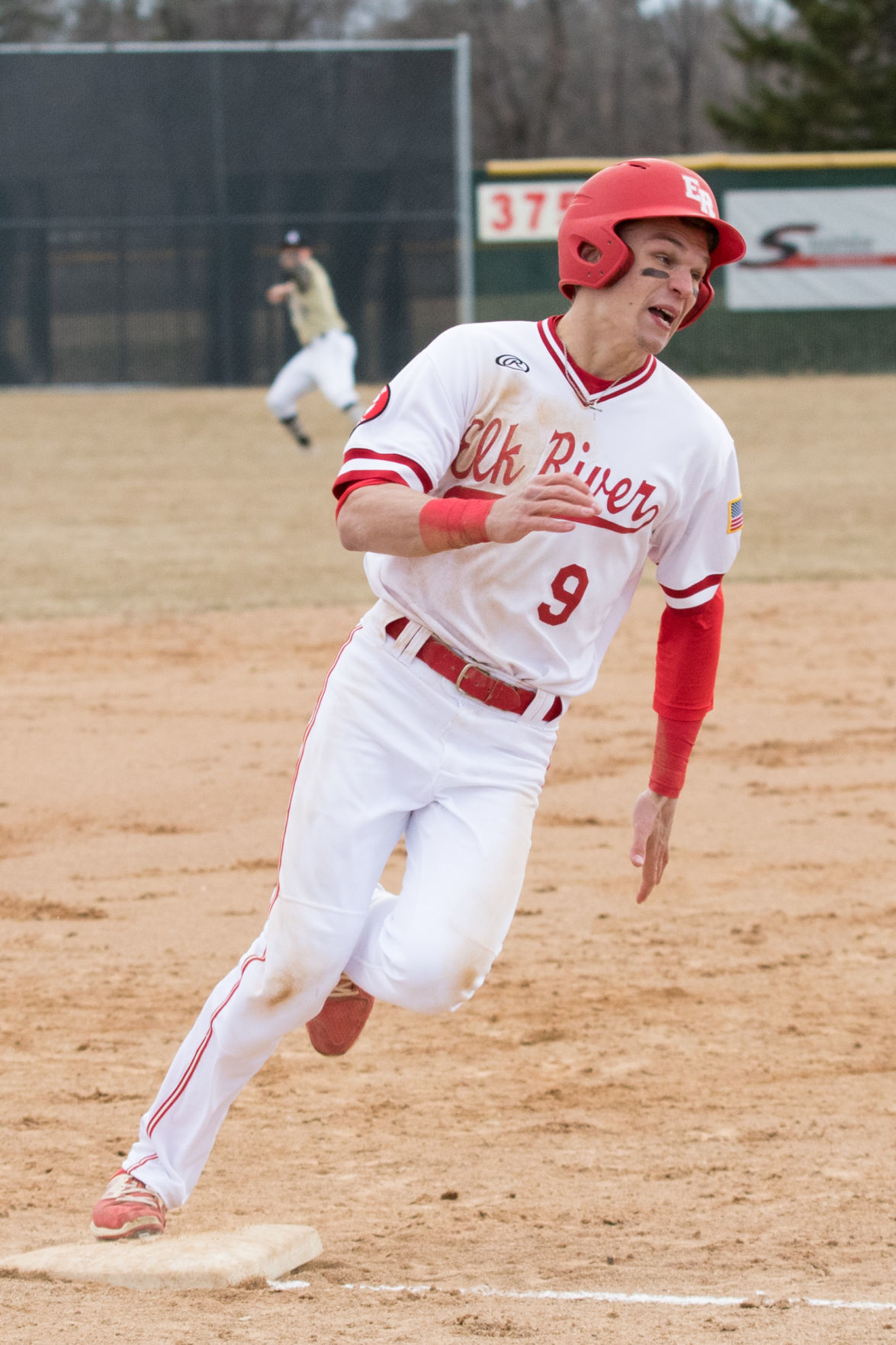 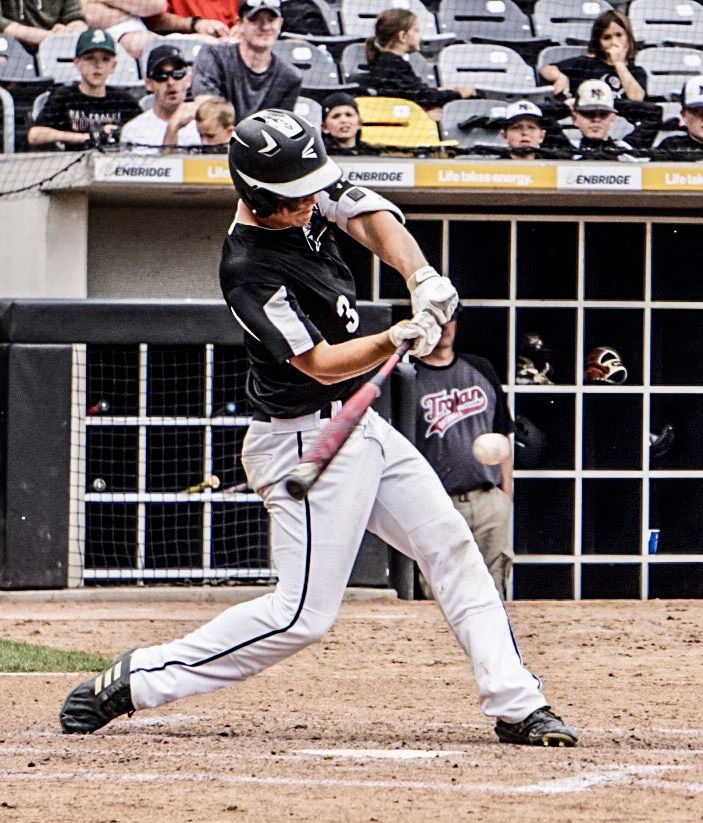 For the first time in school history, Elk River had two players represent them at the Play Ball! All-Star Series in Kyle Esperum (left) and Charlie Eldredge (right).

The Rogers coaching staff came to support Reed Olson, who was the first player from the school to make the Play Ball! All-Star Series.

It’s a series that former Minnesota Twins Kent Hrbek, Glen Perkins and Joe Mauer played in during their high school playing days and District 728 just happened to have three of their own take part in this year’s series in Elk River seniors Charlie Eldredge and Kyle Esperum — the first time Elk River has had more than one representative — along with Rogers senior Reed Olson — the first-ever Rogers player to be selected for the series.

Each played on the North Metro All-Star team, one of six all-star teams competing over the two-day series, and the experience is one they’ll never forget.

“Definitely up there for one of the best experiences of my life,” said Esperum, who batted .452 with 13 RBIs and 10 stolen bases as the Elks’ starting shortstop. “Our team was full of great guys and we all just wanted to have a fun weekend and we did. Also, it’s pretty cool to be recognized as one of the best in the senior class out of Minnesota.”

“It was so humbling to think that I’m playing in the same tournament that Kent Hrbek, Glen Perkins, and Joe Mauer played at my age,” said Olson, who hit .376 with a team-high 15 RBIs as the Royals starting right fielder. “To play with this group of guys, I was just happy to get on the field.”

Eldredge, who averaged .382 with 19 RBIs and nine stolen bases as the Elks starting center fielder, added that it was neat to team up with guys that he’d always respected, but admittedly, weren’t too fun to play against throughout youth and high school ball.

“The experience as a whole was one I will absolutely never forget. As you come up through youth ball, you start to notice players from surrounding teams who are consistently a pain in the butt to play against on the field. You start to learn what they can do and how you can better compete with them,” Eldredge said. “As you continue playing those teams through high school ball, you match up with those players who you’ve competed against since you were 10 years old. As a senior, you kind of think about how you’ve battled with those guys each and every time you play from opposite dugouts. This weekend wrapped up all that history for me. Playing alongside the guys who you’ve never seen as anything but an opponent was really eye opening because this weekend you could see that every single one of them is a guy who has worked incredibly hard to be great at the game they love.”

On the field, the series didn’t necessarily go the way they would have liked, taking a 5-3 loss to the North team, a 2-0 loss to the Metro West team and 5-3 loss to the South team. Olson and Esperum each recorded a hit in a handful of at-bats, while Eldredge had a few nice drives, but couldn’t quite cash in with a hit. The North team ended up winning the series with a perfect 3-0 mark.

At the same time, the weekend wasn’t all about the stats or wins and losses.

“We didn’t win any games but we played a lot of good baseball and we were stride for stride with every team we played,” said Esperum, whose team also played an active role in the community, volunteering at a local Feed My Starving Children. “Some big takeaways though from this for me were to definitely get out and volunteer more. Feed My Starving Children was a lot of fun and it’s for a really good cause. Also, (it showed me) to really just enjoy the moments you have in front of you.”

In Olson’s case, the weekend was also a great opportunity to chat with other players and fans about his team’s Cinderella run to a fifth-place finish at state. He added that it was an honor to represent Rogers at the All-Star Series for the first time, hoping he’s just the beginning of more Royals All-Stars to come.

“It was an incredible honor representing Rogers for the series. I am so proud to wear that Rogers uniform. No matter where I went, people wanted to talk about our state run. It gave me the opportunity to talk about my teammates and all of the individual plays from all of them that got us there,” said Olson, who went from being cut as a sophomore to becoming an All-Star senior captain for the Royals. “I never even had making the All-Star game a goal because it was beyond anything I could have ever hoped for. I really can’t believe that I am the first because there has been so many good Rogers players that played before me. Let’s just hope this is the beginning of a string of Rogers players to come.”

Eldredge said it was also a special opportunity to play with two of his best friends.

“I have played with Kyle since we were 11 years old. We slowly developed into the players we are today and pushed each other all the way up,”  Eldredge said, adding that it was fun to wrap up their high school ball careers together in this way. “I met Reed freshman year. We both played fall ball. ... After that season ended, we stayed in touch, hitting during the off-season and finding time to go fishing during the busy summers. I always looked forward to playing against him, and getting to share the field one last time this weekend was really cool for me.”

Overall, the All-Star trio couldn’t have asked for a better way to close out their high school baseball careers, as they look forward to bigger and better things. Olson will walk on at North Dakota State, while Eldredge and Esperum will play at St. Thomas and St. Scholastica, respectively.

“After all those years of wearing an Elk River baseball jersey, I couldn’t have asked for a better way to cap off my high school career,” Eldredge said. “As a team, Metro North decided we would all wear our school hats during the series. That was really cool for me because Elk River baseball has had a huge impact on my life, and wearing that hat on the field alongside all the best players in the state put an emphasis on the fact that I would not have gotten to that point without the support of everyone in the Elk River baseball community.”

“I couldn’t have asked for a better way to end my high school baseball career,” Esperum said. “Without Elk River baseball, Coach Holmgren, my teammates, parents, and friends, I wouldn’t be anywhere near where I am today. I’ll always be thankful for this opportunity.”

“Other than winning a state title, I don’t know how it could get any better. People are going to be talking about this Rogers team for a long time. It was a wild ride and fun to be a part of. Somewhere in the middle of all of these baseball games I graduated from high school too,” Olson said. “And then to get the opportunity to play with a bunch of really talented baseball players and good people is a great way to cap off a high school career.”