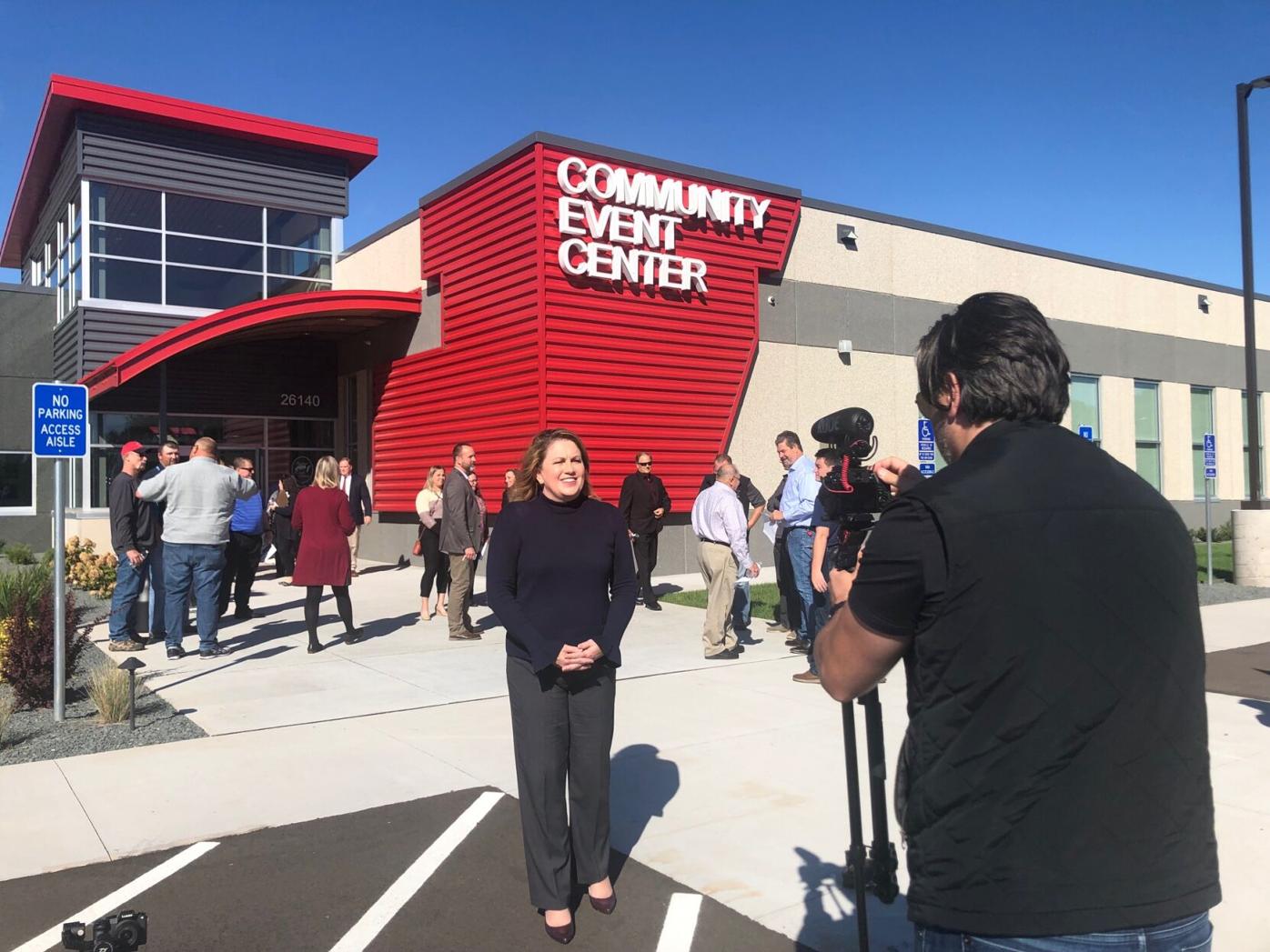 Sen. Michelle Benson, a Republican lawmaker from Ham Lake who is the chief author of the bill asking to have an interchange funded, was interviewed outside the Zimmerman fire hall after a presentation was made inside the event center. 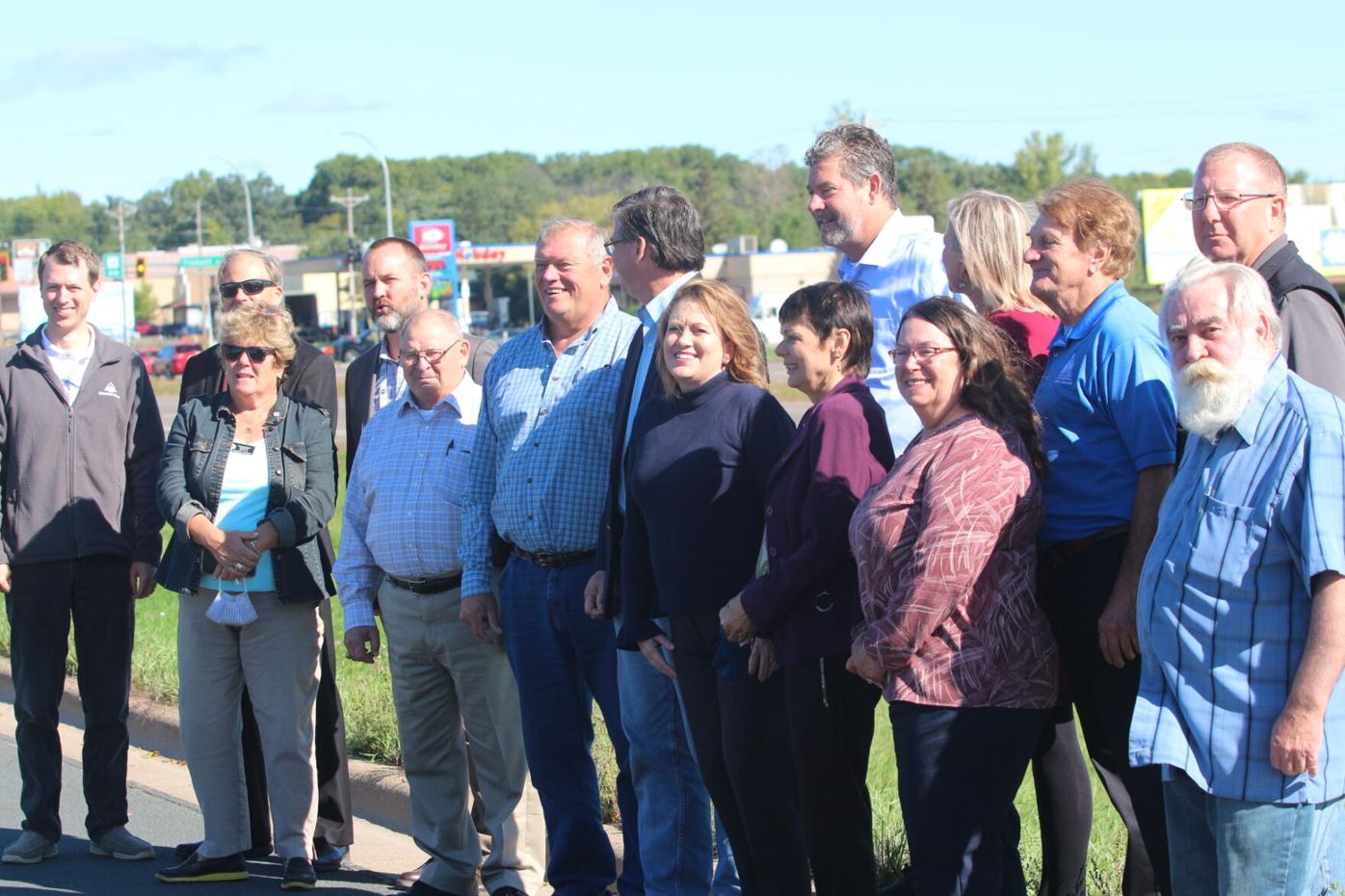 Local officials from the city, county and Minnesota Legislature, including Rep. Paul Novotny, R-Elk River, joined members of the Senate Capital Investment Committee along Highway 169 after information about the need for an interchange at the intersection of Highway 169 and Sherburne County Road 4 in Zimmerman was discussed.

Sen. Michelle Benson, a Republican lawmaker from Ham Lake who is the chief author of the bill asking to have an interchange funded, was interviewed outside the Zimmerman fire hall after a presentation was made inside the event center.

Local officials from the city, county and Minnesota Legislature, including Rep. Paul Novotny, R-Elk River, joined members of the Senate Capital Investment Committee along Highway 169 after information about the need for an interchange at the intersection of Highway 169 and Sherburne County Road 4 in Zimmerman was discussed.

The new event center attached to the new fire station in Zimmerman has been used for a prom, weddings and the Sept. 11 open house to christen the new facility.

This past week it hosted members of the Minnesota Senate Capital Investment Committee in hopes of making it safer to get in, out and through Zimmerman and Livonia Township.

The bonding committee has been asked to eliminate congestion and improve safety for one the state’s most dangerous highway intersections, at Highway 169 and Sherburne County Road 4 in Zimmerman. The problems with the intersection, they say, will only intensify once a freeway project is completed in Elk River three years from now.

Construction of that highway project starts next year. By 2024, the stoplight at the Zimmerman crossing will become the last on a 75-mile stretch between Interstate 94 in Rogers and Mille Lacs Lake.

The committee came at the request of Sen. Michelle Benson, a Republican lawmaker from Ham Lake who is the chief author of the bill asking bonding money. The group tours the state every other year, and the stops on Tuesday were part of second full week of visits around Minnesota.

“What I know is that the people of Sherburne County and Zimmerman don’t ask until they need something,” Benson said. “There has been enough traffic, enough accidents and enough congestion that they really need this intersection. And they really need it now.

“When lake traffic is bad and we’re trying to move large vehicles for commerce, this intersection ends up being a bottleneck. With 169 south of here being opened up, it’s just going push all that traffic up here and make this worse, so let’s get this done.”

A six-minute video of traffic at the intersection played continuously throughout the committee’s visit, since the tour of the site planned for later that morning would not do it justice.

Andrew Witter, the director of public works for Sherburne County, rolled out a slideshow presentation that included a video of the busy stretch that showed a serious injury crash happen when a motorist pulled out on a highway and was broadsided.

“If you happen to keep an eye on it, about every two or three minutes you’ll see vehicles cruising down the shoulder trying to get by the backed-up traffic,” Witter said. “The camera is about 1,000 feet away from the intersection.”

Most recently, a northbound motorcyclist was rear-ended and airlifted to North Memorial in Robbinsdale.

A pedestrian fatality is also still fresh in the minds of locals.

“It’s kind of ironic we’re here,” Witter said of being at the fire hall meeting room, noting all the crashes the Zimmerman-Livonia Fire District has to respond to at the intersection of concern.

The intersection is a significant corridor for freight, industry, commerce, recreation and commuting. It’s also known as a barrier to residents whose town is bisected by the highway and is hampering both development and business retention efforts.

Sens. Amy Klobuchar and Tina Smith along with Congressman Tom Emmer have identified the project as a priority project at the federal level. They will seek 60% of the project costs. The interchange is currently estimated to cost $44 million between construction and acquisition costs.

Emmer told Sherburne and Zimmerman officials earlier this year securing funds for a project like this is his constitutional duty. But he expressed uncertainty what will happen at the federal level.

The project has been on the radar of local, state and federal officials since mid-2000 when an $800,000 check was ceremonially passed from the hands of then-Congressman Mark Kennedy to local officials. That money went to a Highway 169 corridor study that produced a game plan.

The money to finish the plan, however, never came through.

Sherburne County Commissioner Lisa Fobbe said the collapse of the I-35W bridge on Aug. 1, 2007, resulted in an understandable shift in priorities.

Officials are pounding the pavement with greater urgency as the safety of the intersection is four times worse than that of similar intersections in the state as it relates to crash rates and crash severity. The suspicion is it will get a whole lot worse when the Highway 169 Redefine, a project to turn Highway 169 in Elk River to a freeway, is completed. Five sets of stoplights will be removed and replaced with grade separations to keep traffic moving through the city.

“This is a huge safety issue,” Fobbe said. “If nothing else because of capacity. I think our volume has doubled in the last 15-20 years.”

An environmental assessment has been completed. Public input has been sought and would need to be revisited. The county was awarded $2 million last year in state money to complete final design work. Officials say the project in Elk River and the proposal of one in Zimmerman could be very complementary and perhaps even worked on and completed as early as 2024 and 2025.

The county has been unsuccessful so far in securing grants but is still awaiting word on one of the grant applications it submitted.

Witter said the section of Highway 169 running through Zimmerman is not just used by locals and regional traffic. He said motorists from 76 of 87 counties travel 169 every day.

“This is an important intersection and interchange for the whole state,” Witter said. “Freight traffic and recreational travel is amazing.”

“We have had user accounts of having to wait through seven light cycles,” Witter said at a previous presentation.

Zimmerman is no longer a little town. Its population is in excess of 6,000 people, and so is Livonia Township that surrounds the city. Having a freeway in Zimmerman will make everything north of Elk River more attractive, except the intersection at County Road 4.

Witter said earlier this year the county expects to see a 40% growth in traffic over the next 20 years.

Some lawmakers are already quite familiar with Highway 169 as it relates to Zimmerman.

Tom Bakk, I-Cook, the chair of the committee,, said the highway starts in his district. People in one community up there, however, are fighting to hang onto a stoplight so they don’t become a one-stoplight town.

John Jasinski, R-Faribault, said he is familiar with Highway 169 as he has a cabin in Onamia.

Ann Johnson Stewart, D-Plymouth, is a civil engineer by trade and her path has crossed Witter’s path a number of times.

The bonding committee went to the former Fairvew Clinic site to view the highway after the presentation.

Wiger, a Democrat from Maplewood in his 25th year of work at the Minnesota Legislature, took notice of the large number of 18-wheelers and checked to see if he could get any of them to honk at the group. Local officials hope the group can get their colleagues to vote in favor of doing the project.