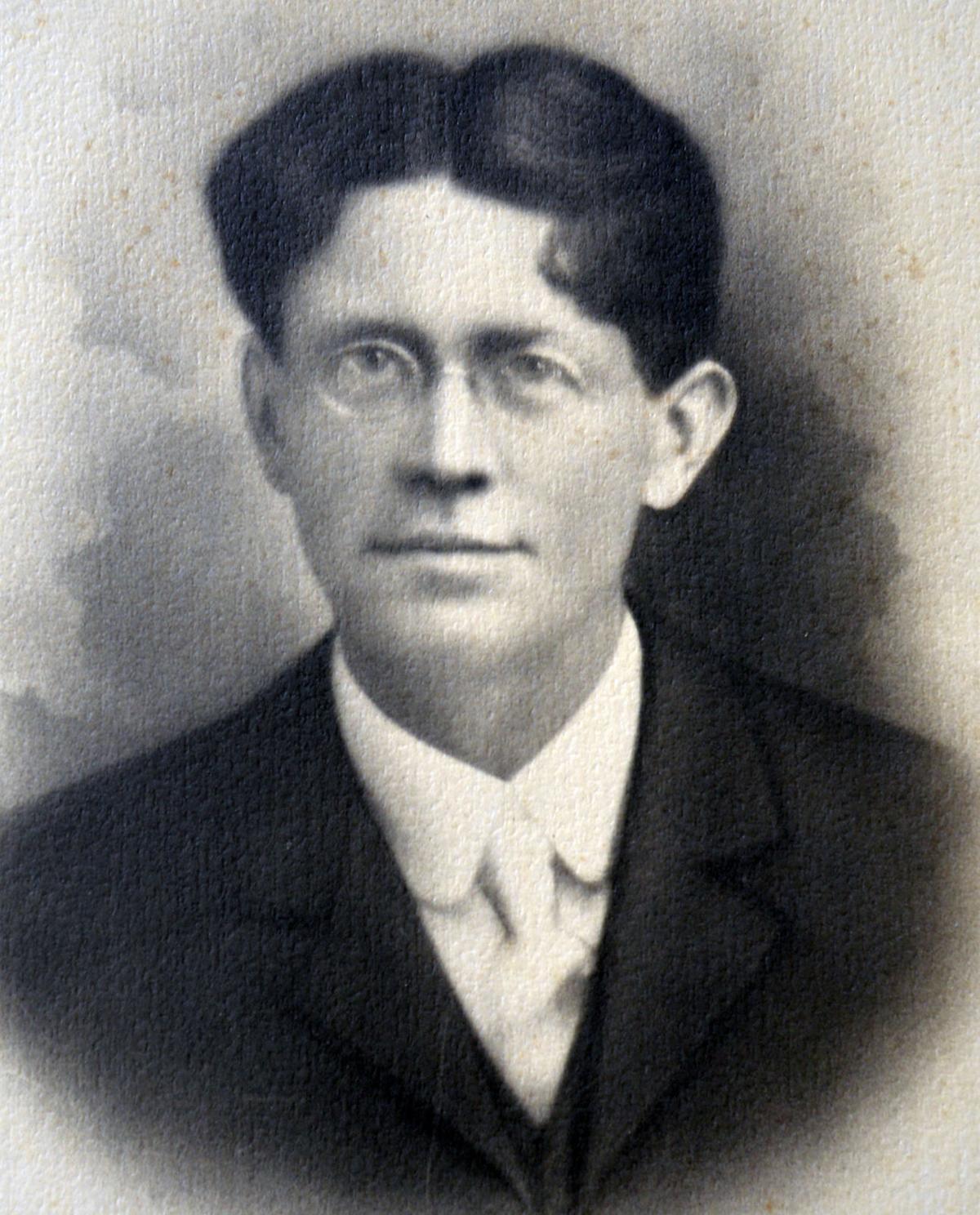 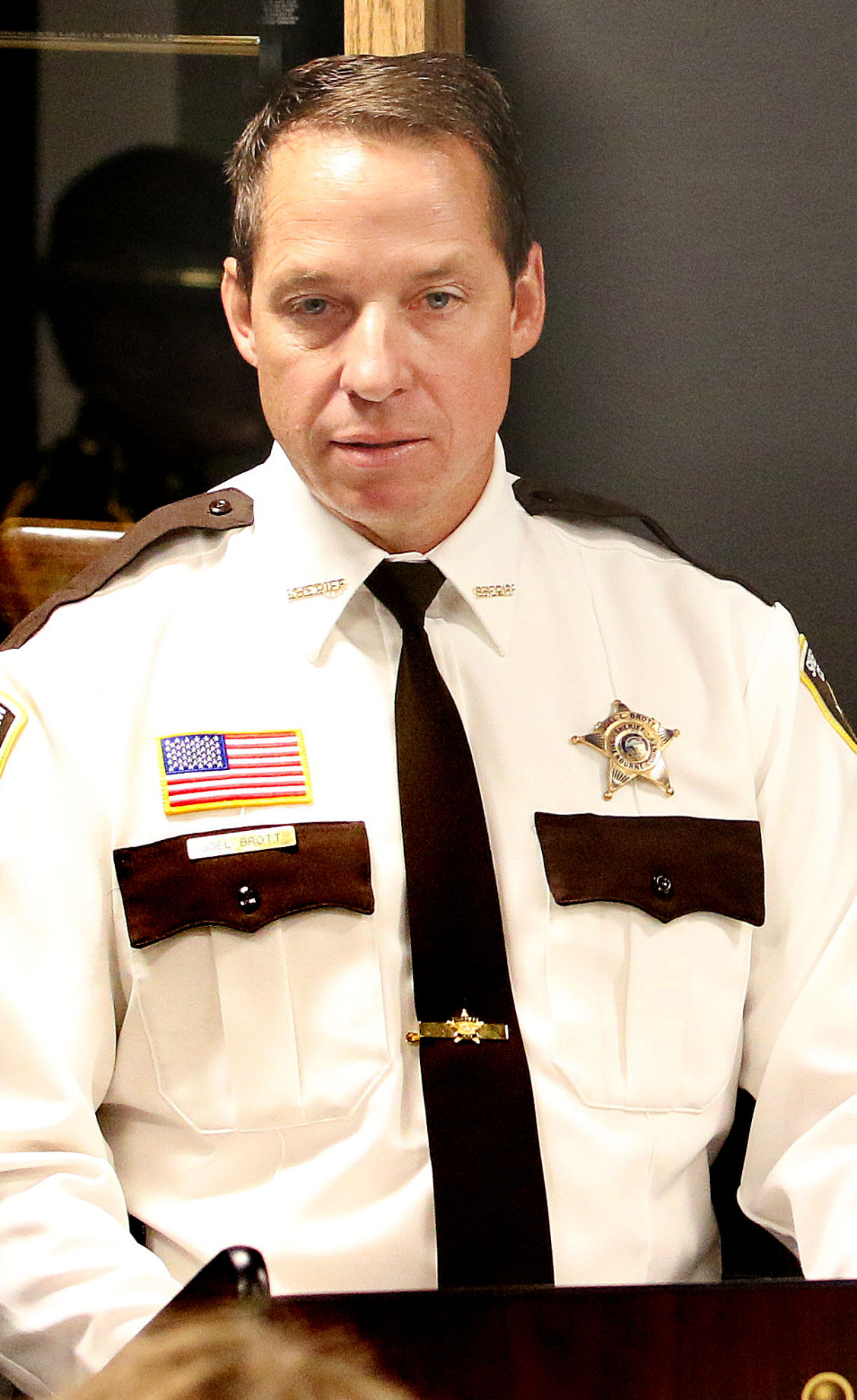 Sheriff Joel Brott talked about Deputy Foley at the dedication. 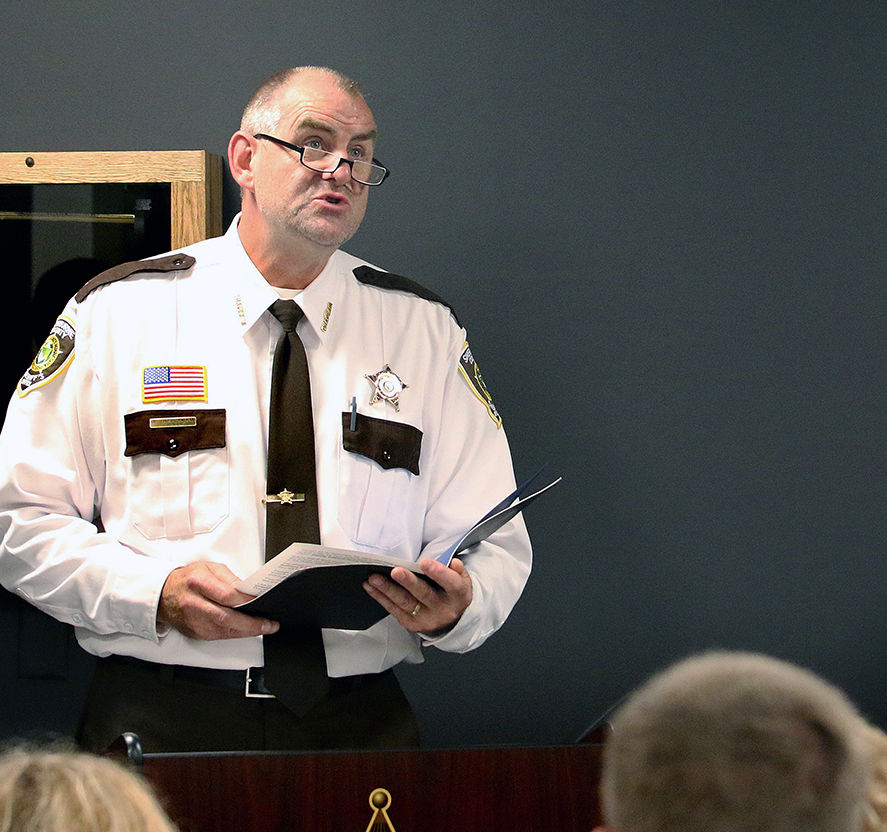 Chaplain Tom Sterneman said Deputy Edward Foley was one of 251 officers who have died in the line of duty in Minnesota through the years. 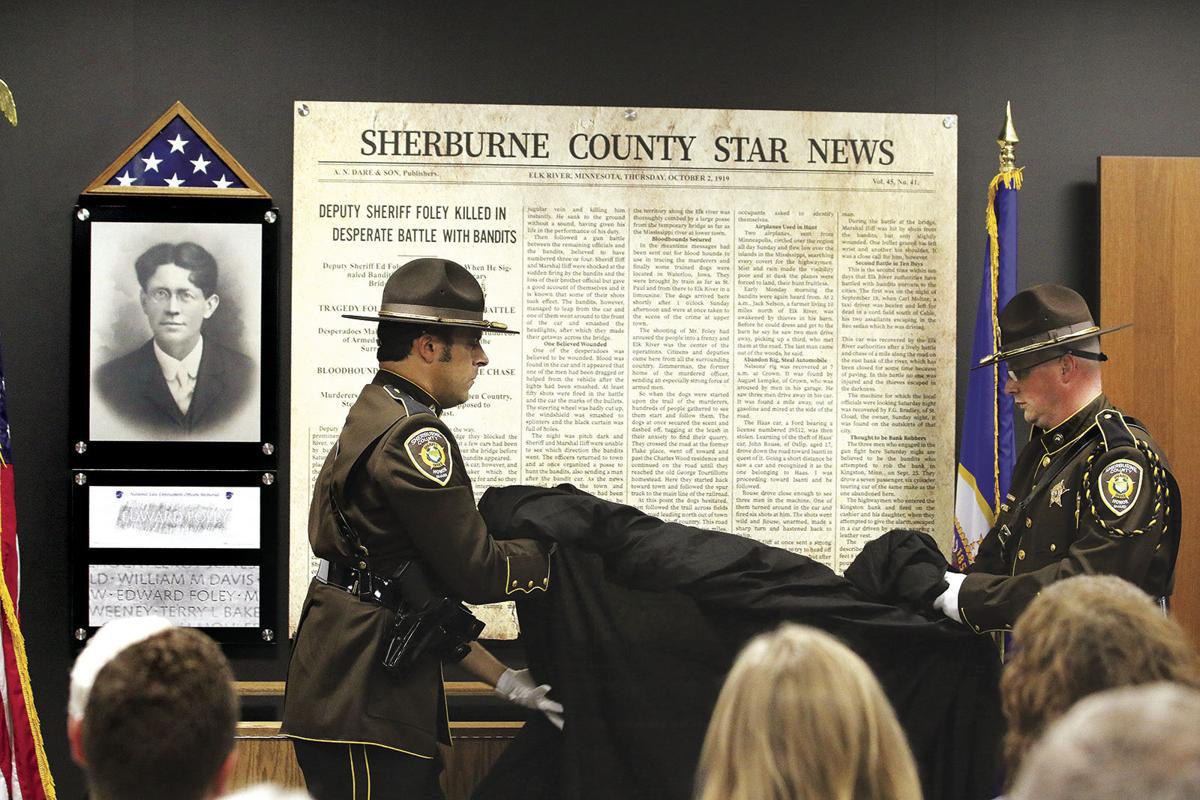 The audience applauded as the Deputy Edward Foley memorial was unveiled Monday in the lobby of the Sherburne County Sheriff’s Office in Elk River. Honor guard members Nabil Gubash (left) and Jesse Overlie removed the curtain covering the memorial. Foley is the only Sherburne County deputy killed in the line of duty. 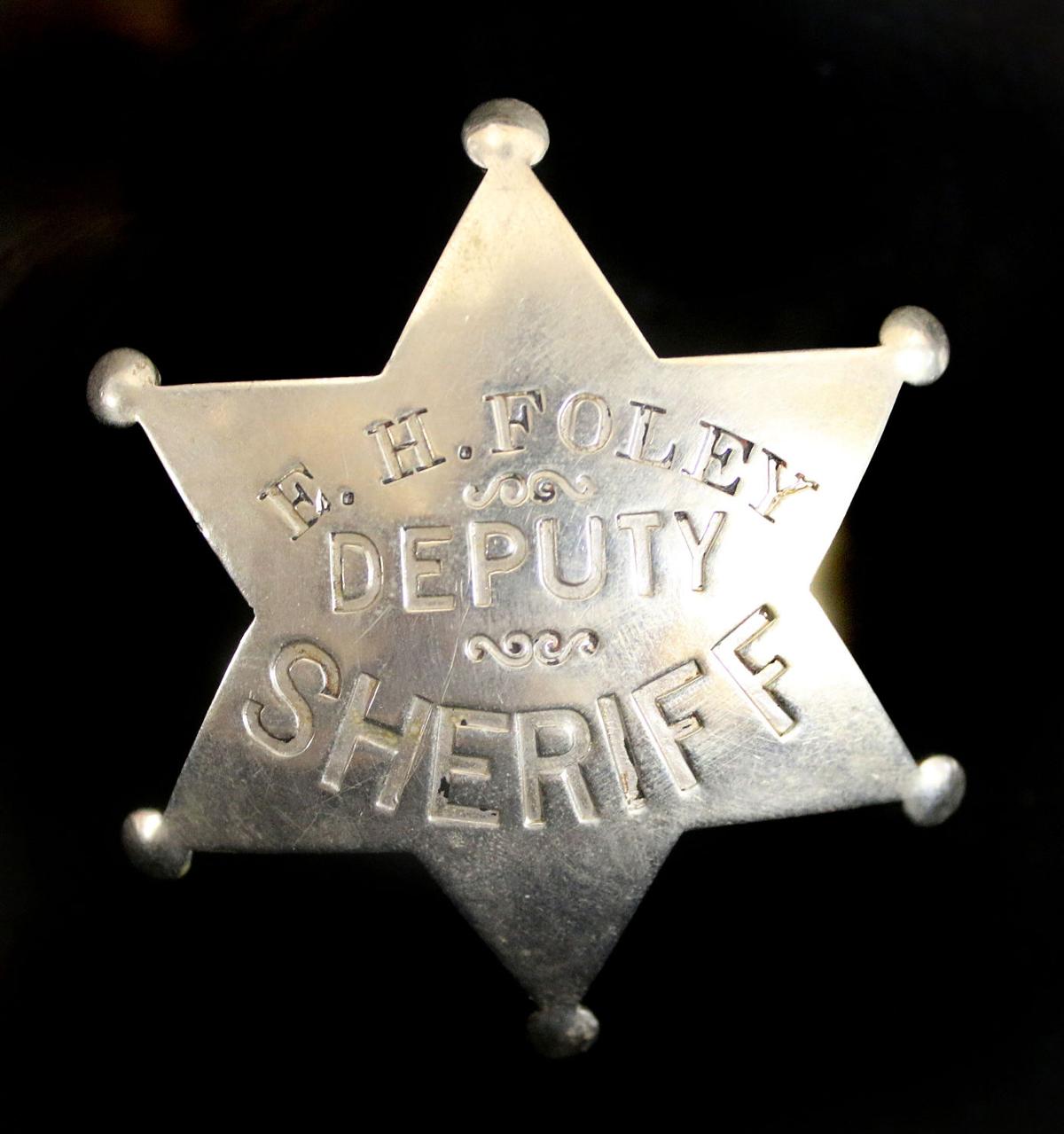 Deputy Edward H. Foley’s badge is on display as part of a new memorial at the Sherburne County Sheriff’s Office in Elk River. 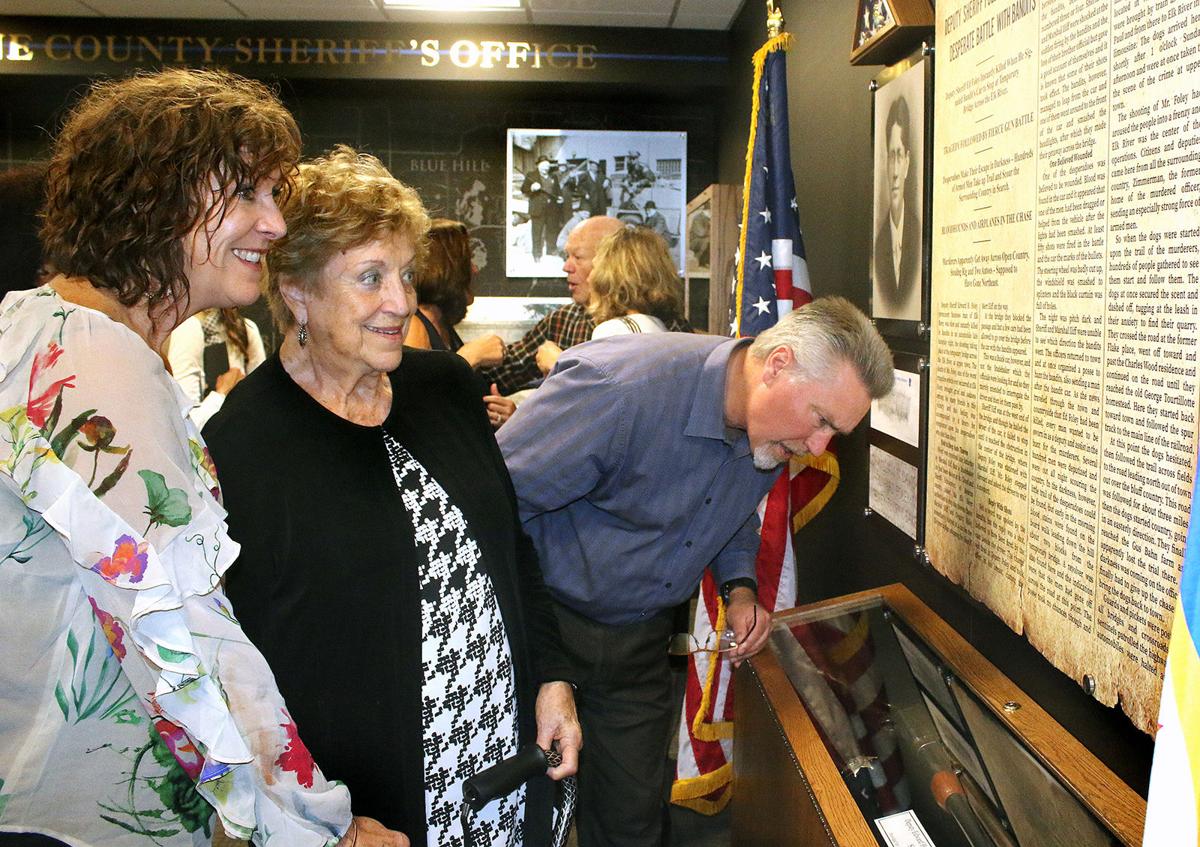 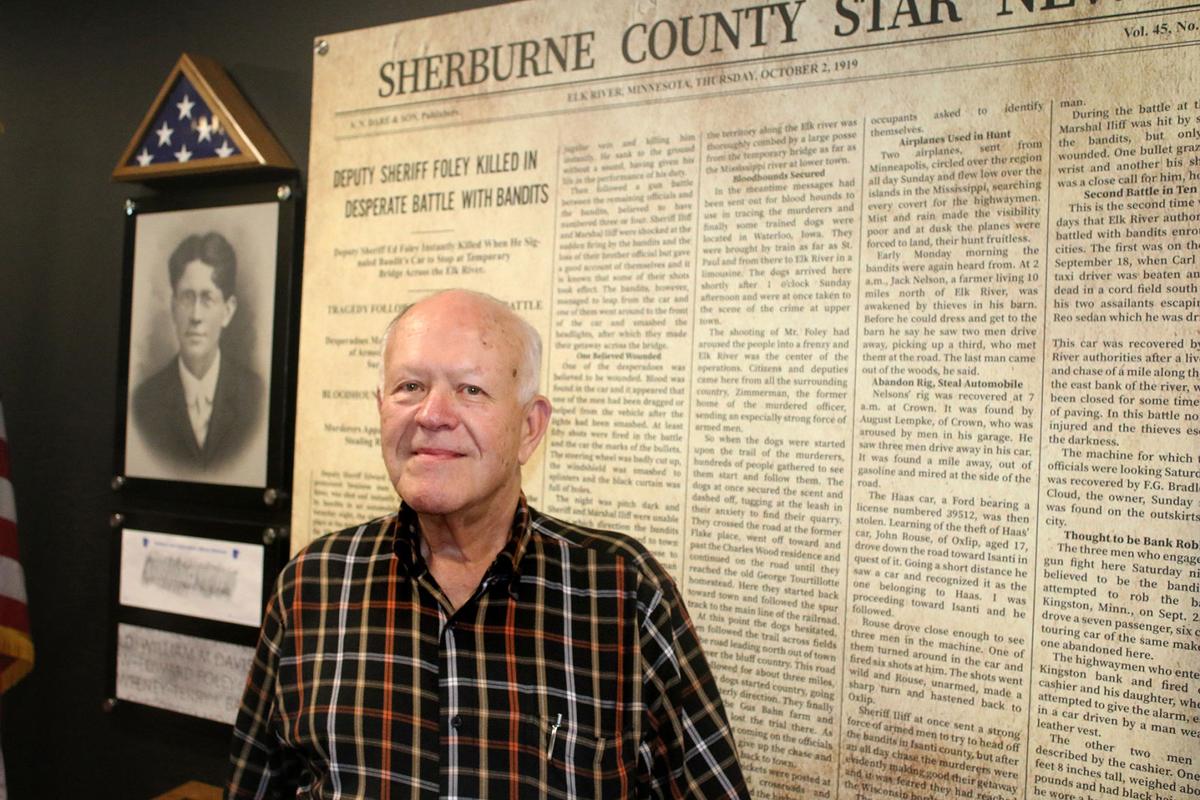 Sheriff Joel Brott talked about Deputy Foley at the dedication.

Chaplain Tom Sterneman said Deputy Edward Foley was one of 251 officers who have died in the line of duty in Minnesota through the years.

The audience applauded as the Deputy Edward Foley memorial was unveiled Monday in the lobby of the Sherburne County Sheriff’s Office in Elk River. Honor guard members Nabil Gubash (left) and Jesse Overlie removed the curtain covering the memorial. Foley is the only Sherburne County deputy killed in the line of duty.

Deputy Edward H. Foley’s badge is on display as part of a new memorial at the Sherburne County Sheriff’s Office in Elk River.

One hundred years after Sherburne County Deputy Edward H. Foley was shot and killed at a roadblock in Elk River, a memorial in his honor has been unveiled.

A hushed crowd filled the sheriff’s department lobby in Elk River on Monday for a solemn ceremony dedicating the memorial.

He gets tears in his eyes thinking about his grandfather’s sacrifice. He said he hopes the memorial will teach people respect for law enforcement officers and serve as an example of the good that they do — 100 years ago and today.

Speaking at the dedication, Sherburne County Sheriff Joel Brott described Foley as a successful businessman and a jokester, popular and well-liked by his many friends. One newspaper article referred to him as “an enterprising businessman, a live wire, ever ready to help his friends and a booster for his home community.”

“He sounds to me like a person we would like to have as a part of our community today,” Brott said.

Foley was also a dedicated family man, husband to Eva and a father to Lucille and Merton, Brott said.

On the business front, Foley started in the creamery business before purchasing a livery in Zimmerman. He managed a hotel and garage in Zimmerman before moving to Elk River in 1918. He also bought and ran an auto repair business.

Foley had been a sheriff’s deputy for 10 years when he was called to what would be his last duty, Brott said.

Brott described what happened next.

A Studebaker stolen in St. Cloud was headed toward Elk River, with suspects inside wanted for a bank robbery. Late on the night of Sept. 27, 1919, Foley, Marshal Will Iliff and Sheriff Mert Iliff went to the Elk River bridge to set up a roadblock.

They checked a few cars and let them pass when a Buick approached the roadblock. It was different than the Studebaker they were looking for, but Foley wanted to question the people inside before letting them pass.

Foley asked the driver to wait a moment.

“Not a word in answer was spoken by the bandits,” a news report at the time read. “But the reply was a shot, believed to have been fired by the man beside the driver.”

Foley was hit in the chest and died instantly.

News reports, court records and arrest reports don’t show any evidence that Foley’s killers were ever charged for the murder, Brott said.

Chaplain Tom Sterneman told the audience at the dedication that Foley is one of 251 officers who have died in the line of duty in Minnesota through the years. Since 1791, there have been at least 23,834 known line of duty deaths in America, he said.

“All of us owe a debt of gratitude to these brave individuals of law enforcement, no matter the agency they served. They laid down their lives for us. They must be remembered,” Sterneman said.

Monday’s dedication was an opportunity to honor and remember Foley for his bravery and his ultimate sacrifice, he said.

Sterneman said Foley was a member in good standing in the Catholic church and is buried in Calvary Cemetery in Anoka. He invited the audience to join in praying a prayer he said the late deputy no doubt prayed many times, the Lord’s Prayer.

The ceremony ended with the unveiling of the memorial. As two members of the sheriff’s department honor guard pulled away a black curtain covering the memorial, the crowd broke out in applause.

The memorial includes a photograph of Foley, an inscription of his name that appears on the National Law Enforcement Officers Memorial in Washington, D.C., and an enlarged copy of a newspaper account of the events that occurred the night he died. Also in the display and on loan from the Foley family are the fallen officer’s badge and shotgun.

The dedication was attended by Foley’s descendants, law enforcement personnel and others.

Foley’s granddaughter, Sharon (Sass) Pedercini, of Plymouth, said the memorial and the ceremony were wonderful.

“We’re very proud. The bridge was one joy, the Foley bridge (the Orono Dam bridge in Elk River dedicated to Deputy Foley). Then came this,” she said.

Pedercini, 88, is the daughter of Lucille. Lucille was 11 when her father was killed and her brother, Merton, was 9.

“It had to be just really, really sad,” Pedercini said.

Pedercini said her mother and her grandmother — Foley’s wife, Eva — didn’t talk a lot about him or the events surrounding his death.

“But we knew,” Pedercini said. “And Mother would always say, ‘You would have been spoiled rotten (by Foley).’”

Pedercini wears a ring made from a stick pin that her grandfather was wearing the night he was shot. Pedercini and her two siblings had it made into a ring for their mother and now it is hers.

Her cousin, Patrick Edward Foley, has a memento of another kind — his name. He is the son of the deputy’s son, Merton Edward, and is named after his father and grandfather.

Foley, 77, of Marshall, said his dad didn’t talk much about his father.

“I do know that my grandfather, Ed, named his son, Merton, after the sheriff because Merton Iliff was the sheriff at that time and they were real close,” Foley said.

Senkyr's grandmother was Foley’s daughter, Lucille. As an adult, Lucille and her husband, Russell Sass, owned the Landmark Motel in Elk River. Russell Sass was also a gifted artist.

She said the family appreciates that the sheriff’s department took the initiative to remember him a century after his tragic death.