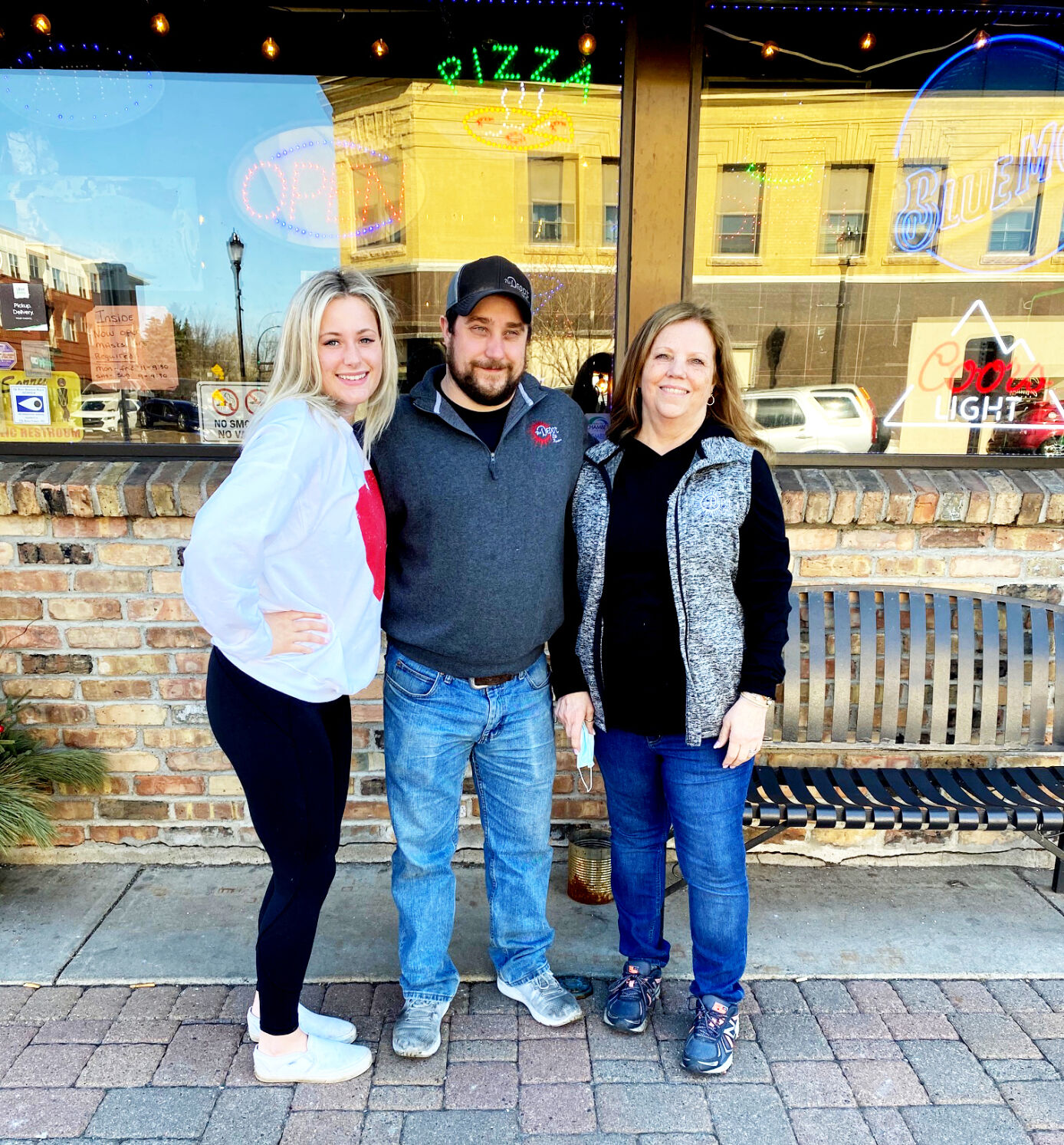 The owner of the Sunshine Depot Sue Anderson (right) has weathered the pandemic and closures with her granddaughter Abby Anderson and her son Brian Anderson. The trio developed a curbside business, and the community has come through with support. 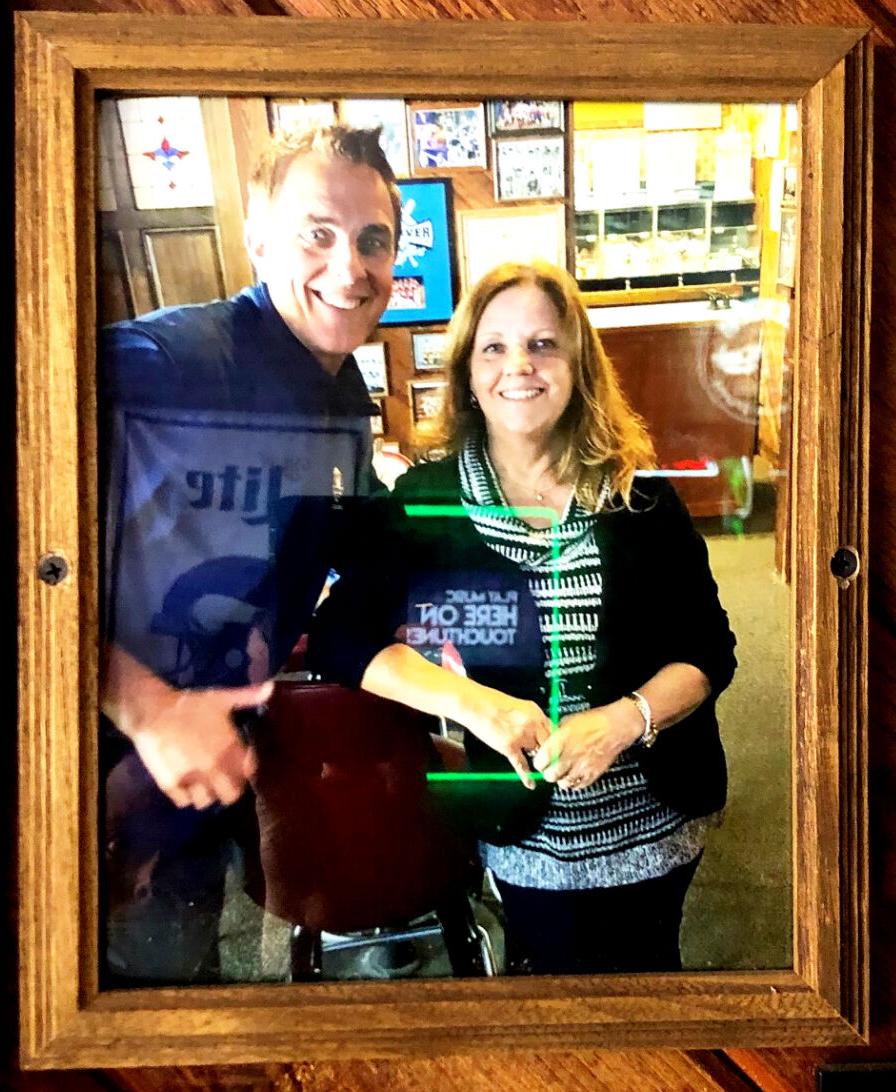 Sunshine Depot owner Sue Anderson with KARE 11’s Eric Perkins inside the family restaurant and sports bar. The photo is one of hundreds on the walls of The Depot. 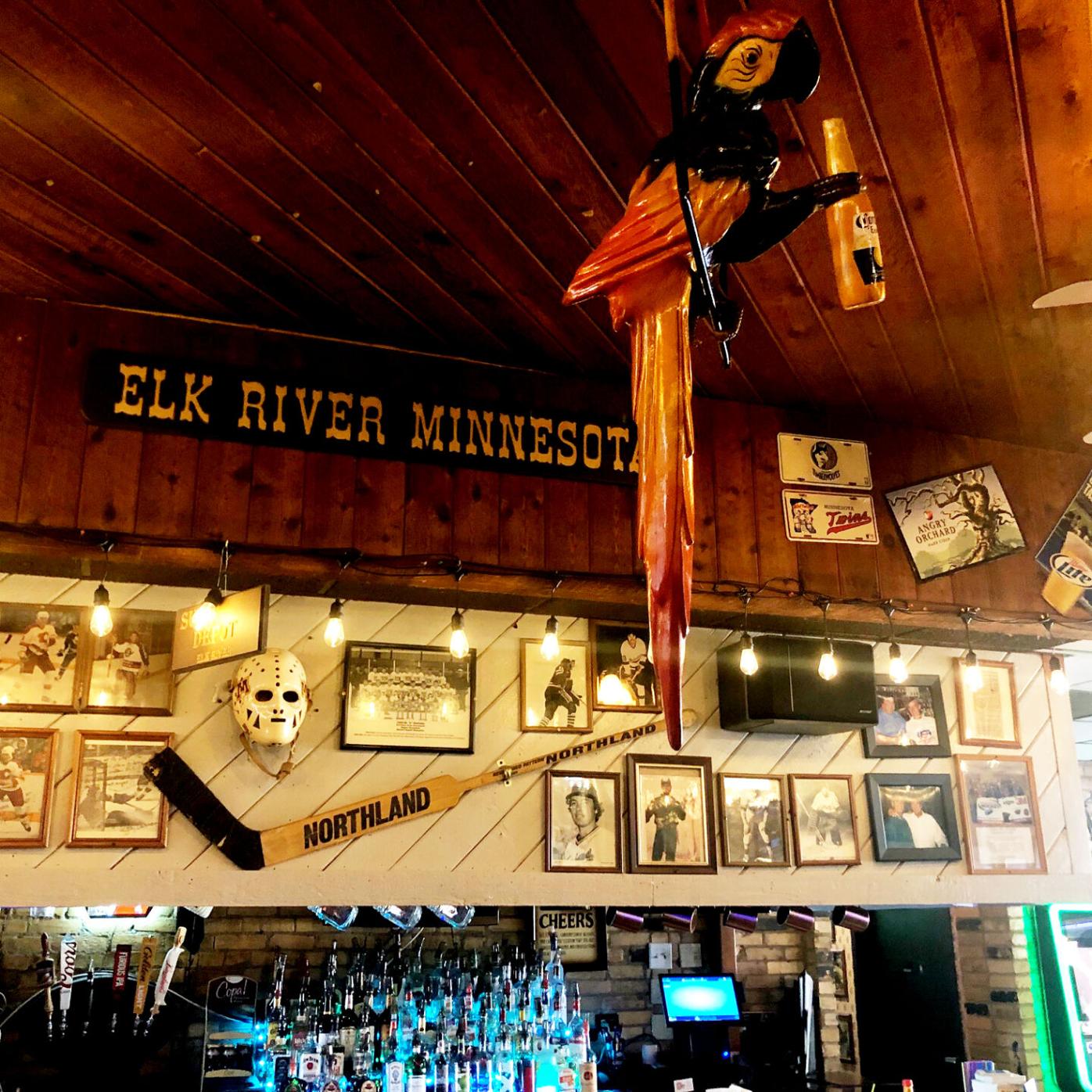 Above the bar is a host of pictures and equipment from Elk River’s rich sports history. 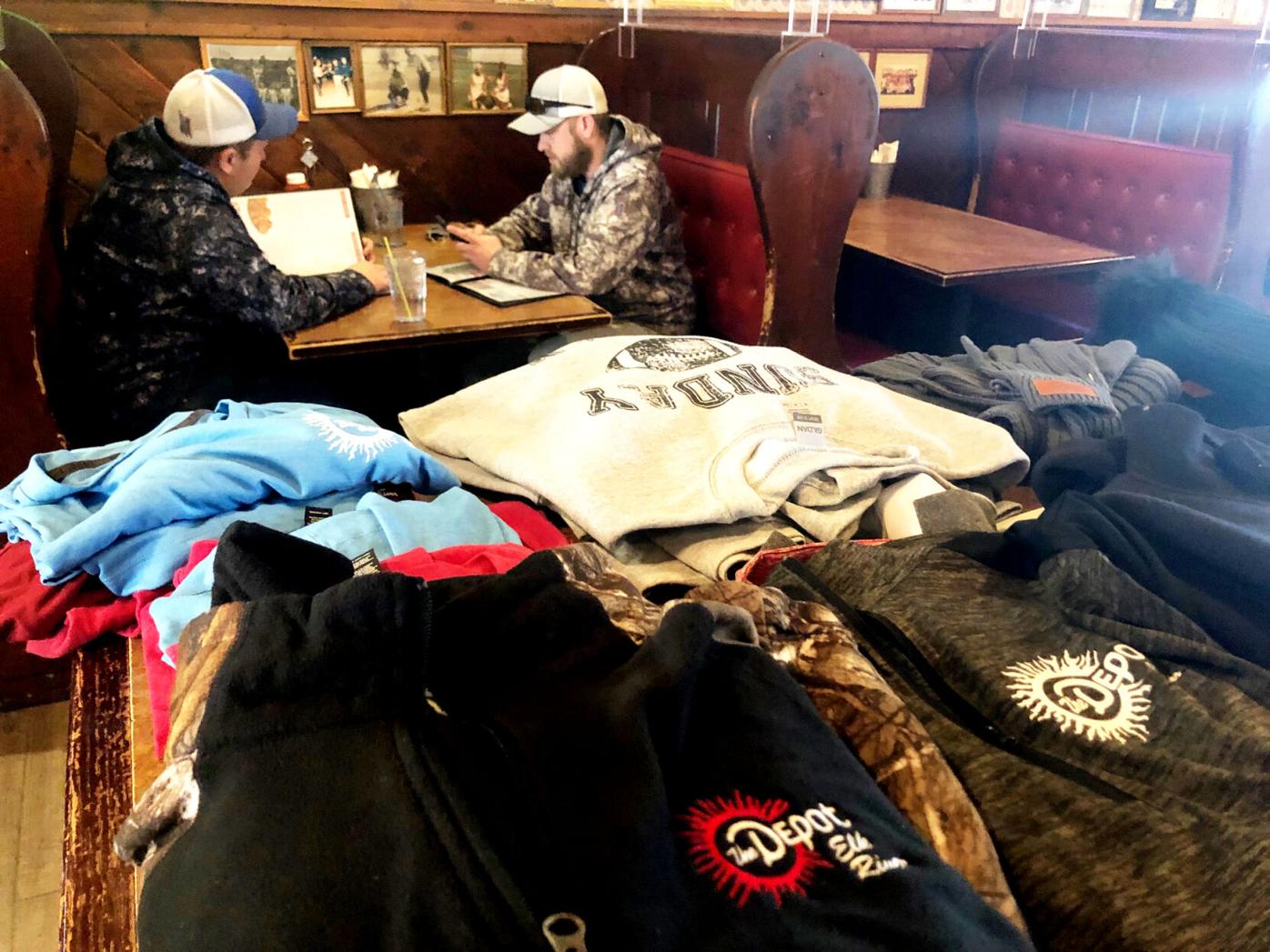 Sue Anderson, the owner of Sunshine Depot, turned her restaurant into a clothing store to sell merchandise during the pandemic for customers to peruse by appointment only. Restaurant operations were limited to curbside for 170 days. 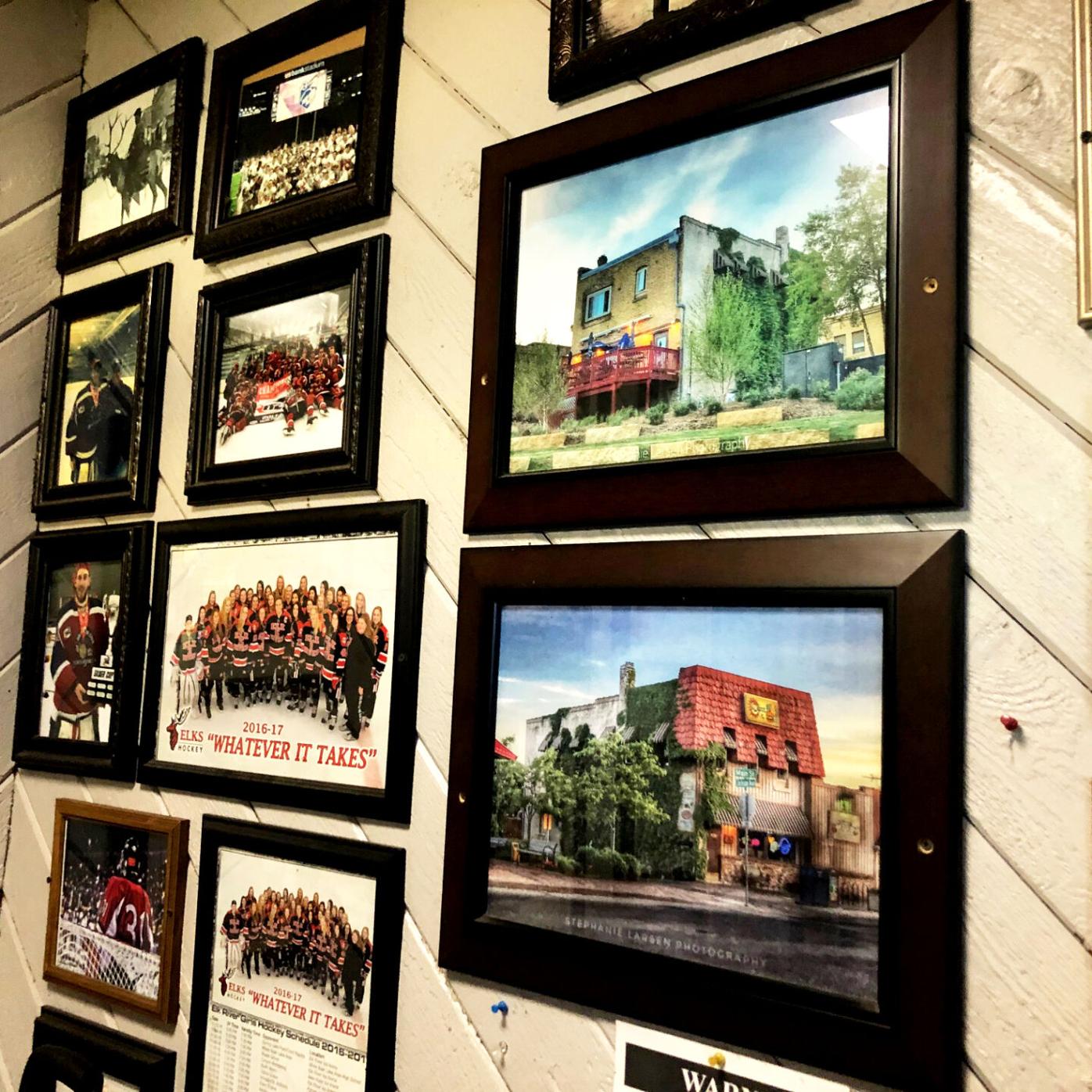 Customers at the Sunshine Depot are greeted with photos that chronicle the history of the building the business is in and the accomplishments of many Elk River athletes.

The owner of the Sunshine Depot Sue Anderson (right) has weathered the pandemic and closures with her granddaughter Abby Anderson and her son Brian Anderson. The trio developed a curbside business, and the community has come through with support.

Sunshine Depot owner Sue Anderson with KARE 11’s Eric Perkins inside the family restaurant and sports bar. The photo is one of hundreds on the walls of The Depot.

Above the bar is a host of pictures and equipment from Elk River’s rich sports history.

Sue Anderson, the owner of Sunshine Depot, turned her restaurant into a clothing store to sell merchandise during the pandemic for customers to peruse by appointment only. Restaurant operations were limited to curbside for 170 days.

Customers at the Sunshine Depot are greeted with photos that chronicle the history of the building the business is in and the accomplishments of many Elk River athletes.

The Sunshine Depot established itself as an anchor along downtown Elk River’s riverfront long ago. Never has its ability to weather a storm been tested more than it has this past calendar year during a pandemic brought on by the coronavirus.

Sue Anderson, the owner of the family-run business, started as a hostess after Rob VanValkenburg opened it in 1980. She acquired part of the business in 1998 and took over sole ownership in 2015.

She knew when the Depot was shuttered last March she was in for the storm of a lifetime. When news of the state-mandated shutdown scrolled on the bottom of the many televisions in her “fine family restaurant” during a bustling dinner rush, Anderson said she retreated to the kitchen as tears started to fall. As she exited the front of the house, she told her patrons behind her not to forget about her and the Depot.

First things first, Anderson took steps to batten down the hatches and spoke with her bank and accountant to brace for the sudden stoppage of income. After three days of complete closure, she returned to the restaurant with her son Brian and a granddaughter Abby to reformulate the business into a curbside operation. Phone orders that were once written down casually in between taking orders inside now needed to be entered rapid fire in an eerily quiet setting. She fielded calls and entered the orders in the computer immediately. Brian and Abby hustled to prepare and present the meals. In between taking orders and running them out, Anderson went in overdrive on Facebook to promote her business. Fear of failure drove to her to go “above and beyond.”

It’s that “above and beyond” mindset that has propelled the success of the business all these years, Anderson says. It’s Elk River’s No. 1 sports bar, and it is known as much for a great place to bring the family out for a nice meal and a good time as it is for pre-game meals and post-game parties. Anderson prides herself on that, and the fact that the food she and her staff prepare is top-notch.

The kids know where to find the coloring books and never leave without a cookie. They run to the candy machines and get rewarded with a sucker if they’re good. The adults know they can count on good food, friendly service and a hometown atmosphere like no other.

The key to staying alive in 2020 was transitioning all that to a curbside operation.

“We continued to maintain that mantra of going above and beyond,” making sure the customer who buys one kids meal gets two cookies because she and/or her staff know they have two kids at home.

Unable to invite guests in, Anderson turned her dining area into a clothes shop with Sunshine Depot merchandise. People called and made reservations not to eat or drink but to shop. The community ate it up.

“I had one mom in here with her daughter,” Anderson recalled. “After a while, the daughter announced she didn’t find anything to buy. The mom told her: ‘We’re not here to shop. We’re here to support.’ ”

It has been like that all along in a pandemic as a faint harbor light seems to be shining at the end of the COVID-19 tunnel.

“Customers would add items to their order just to beef up the size of their bill,” Anderson said. “Some would buy a gift card every time they placed an order.”

The community rallied with a Together Elk River campaign to encourage residents to dine locally. The city helped with loans, grants and ordinance amendments to make outdoor dining more profitable. There was even forgiveness of loans.

“We’re doing good,” Anderson said. “We’re not where we were, but we’re going to make it. The community has been awesome.”

The community has a long history with the Depot.

The restaurant predates all existing Elk River eating establishments with the exception of McDonald’s, which showed up on Elk River’s landscape back when Elk River was a one-stoplight town.

Rob VanValkenburg founded the business in 1980. The Elk River entrepreneur also opened the former AmericInn in Elk River, and owned and operated an A&W before turning it into a Sneaky Pete’s. He also remodeled the former downtown theater into the Cinema Professional Building and a Black Bear Lodge and Saloon in the Brainerd Lakes Area where he retired before he died in 2009.

The Sunshine Depot back here in Elk River always held a special place in his heart. It’s where old-timers have gone for coffee in shifts through the years. It’s where people celebrated occasions and sports teams celebrated championships. Elected officials have gathered there after long meetings. Many Elk Riverites have been mourned at the Depot after funerals down the street at Dare’s Funeral Home and other local churches.

VanValkenburg would say he felt the arrival of each new restaurant throughout Elk River’s growth years.

“He’d always say there goes another slice of the pie,” Anderson recalled.

Fortunately, the pie in Elk River has always been growing, and the Depot has never struggled to get its fair share.

Anderson says she doesn’t even consider nearby restaurants and those that have popped up across the town as competition.

“I see them as complimentary,” she said. “I have what they don’t have and they have what I don’t have.”

Anderson said VanValkenburg built a great business, and it was more formal in nature. The staff wore uniforms.

The Depot wasn’t always a sports bar. When it opened the business was sparsely decorated with historic pictures of downtown, like one that still hangs of a train derailment and the time Hubert Humphey visited Elk River. There were even a few of old Elk River High School football teams.

But it was a family restaurant at its heart and always will be as far as Anderson is concerned. The sports bar grew out of the business’s zest for supporting local sports teams, quarterback clubs and so forth. Pictures of the old downtown were eventually joined by pictures of youth teams sporting Depot sponsorships. Pictures of high school teams winning championships replaced other photos. Pictures of local Elk River boys and girls who hit the big time eventually went up as well as pieces of equipment. Pictures of celebrities also now line the walls of the restaurant. Elk River’s history greets you as you enter the vestibule outside the restaurant and is found no matter where you are seated. Hockey Day Minnesota victories have been toasted as well as state championships won by Elks.

KARE 11’s Eric Perkins did a spot on the Depot and has picture with Sue on the wall.

WCCO awarded the Sunshine Depot Top 10 honors for one of the best fish fries in the state and the rest of the nightly specials have become legendary for Elk Riverites.

But what happens to a restaurant that gets shut down for nearly 170 days and when it’s reopened only to 50% capacity?

The community has come through for the Sunshine Depot and many other restaurants in town. Anderson pursued loans, forgiveness of them, outdoor dining when those options became available. Anderson used Facebook to market their legendary food to the outside world. One time a staff member ran around outside in a pizza costume to attract attention. The community laughed with them. What else could they do?

The good news is more people are aware of the Depot than ever before. The bad news is some of the best customers can’t bring their teams in for a pre-game meal or a post-game celebration. Parties are limited to six people. Social distancing rules are followed, and masks are required. Anderson says policing of masks has been worst part of the pandemic, because of the grief they take for making people wear their masks and stay seated.

The community wouldn’t let her if she wanted to. They haven’t forgotten the family-run business or their hometown bar and fine family restaurant.

“We can’t wait for things to get back to normal again,” Anderson said. “Our goal is to have a fun, fine dining experience that’s not crazy expensive. Our food is top-notch, and we don’t cut corners.”

Flat bread pizza and cauliflower crust are among the latest new additions. The burgers, the pizza, the broasted chicken and all of its other specialties are still available.