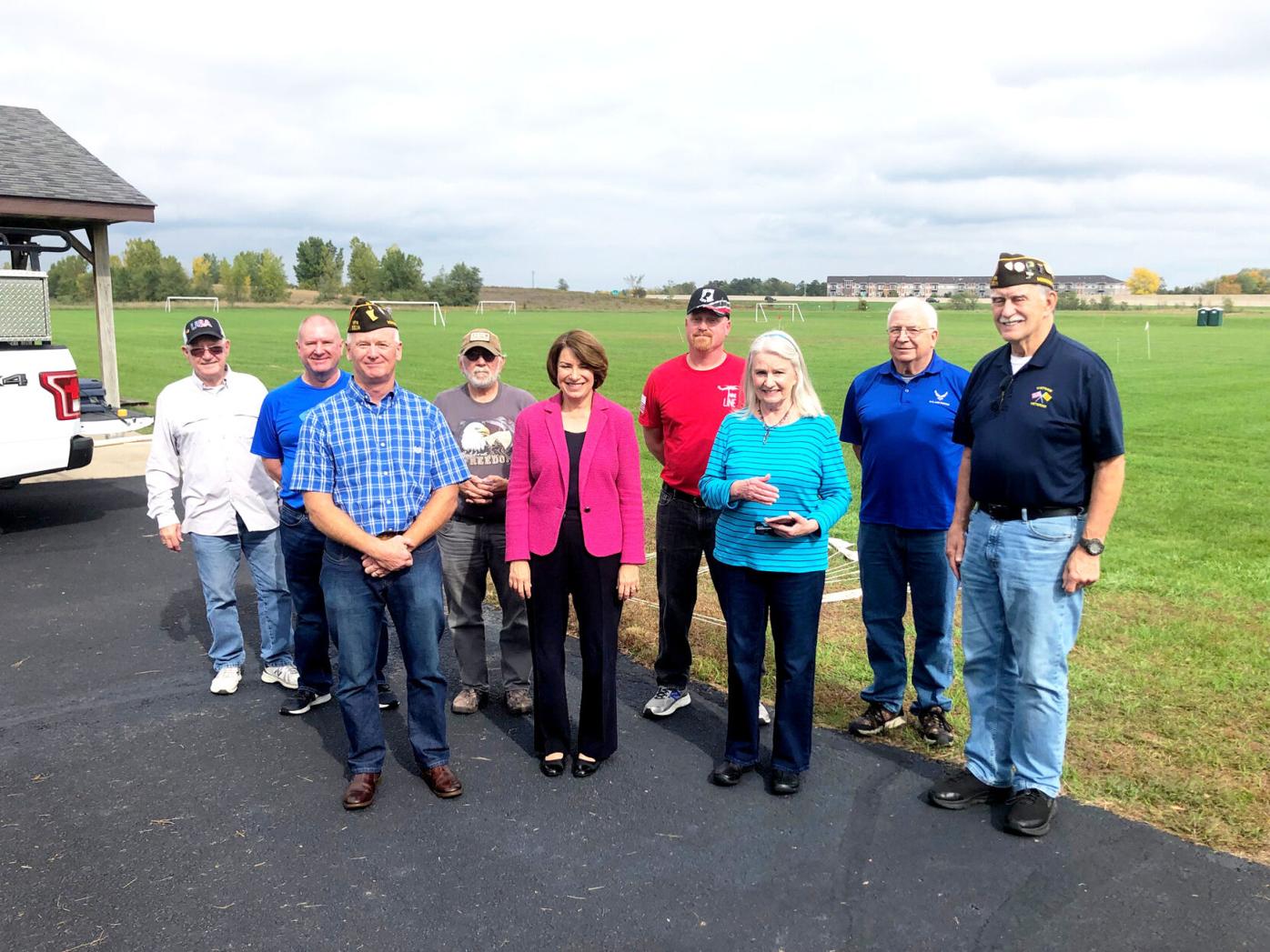 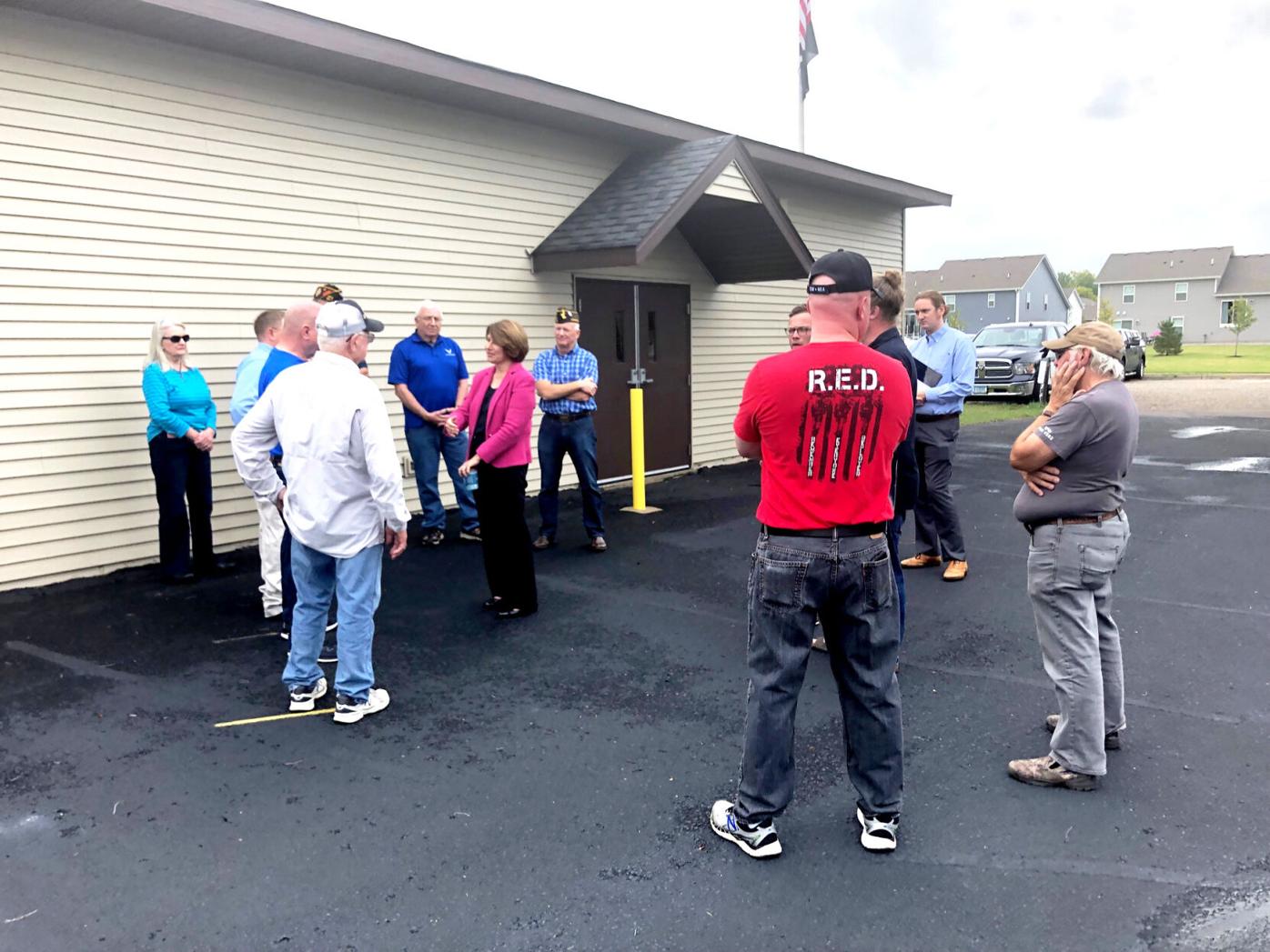 Before moving indoors to sit down and talk, Sen. Amy Klobuchar, D-Minn., spoke to each member of the VFW post individually outside its meeting facility.

Before moving indoors to sit down and talk, Sen. Amy Klobuchar, D-Minn., spoke to each member of the VFW post individually outside its meeting facility.

The mantra of the organization that serves veterans of foreign wars is “no one does more for veterans than the VFW.”

The Elk River-Rogers VFW also does a lot for its community, and members took time on Oct. 1 to show Sen. Amy Klobuchar the soccer complex they have developed over the years and shared how the community is able to use it free of charge.

VFW Post 5518 bought the land and started developing the complex in 1988. It has long been paid for with proceeds from pull tabs from The Sunshine Depot, members proudly report.

At the present time, the Veterans Memorial Sports Complex is the home of Borreal FC and Rogers United Soccer Club, serving upward of 2,000 youth soccer players.

The Veterans Memorial Sports Complex is also the home to a youth rugby program and the Minnesota Amateur Space Association that involves rocketry.

The complex and community center have become the focus of many local community gatherings and events. Examples include annual state rugby tournaments, Scouting events, local rocket clubs and other community organizations who use the facility.

Members reported to Klobuchar soccer and rugby participation was back up after the 2020 season was strained by the pandemic.

“We were pretty much back to normal,” said Dennis Maddox, one of the post members and a judge advocate for the state organization. “But (the fields) got dry, and one organization moved to another field. We’ve recovered (from the drought) by a miracle.”

The complex continues to be entirely funded by the pull tabs operation.

“If these associations were to go somewhere else, they’d be paying thousands of dollars a year,” Maddox said. “Our only income are the pull tabs at Sunshine Depot.”

It was obvious as Klobuchar surveyed the complex and spoke to the group inside the community center on site, she was impressed. She asked if other VFW posts know about the project.

“We’re just a blip on the radar,” one member said.

The organization’s VFW and Auxiliary membership worldwide is about 1.6 million.

The Elk River Rogers VFW Post prides itself on not being known for a bar. Most are not. Of the 6,200 posts worldwide, only about one-third of them have a bar or canteen.

“We don’t want to be known for a bar,” Maddox said.

Klobuchar applauded the group’s efforts, noting the more kids a community can have involved in sports and such, the better.

“Kids make these last-minute decisions like driving drunk or taking drugs and getting hooked,” she said.

“Parents get to know each other,” Post Member Rick Havrilla said. “This is for the community. The way I look at it, personally, this country backed me. It’s up to me to back the country.”

Klobuchar was again visibly impressed by what she heard, noting it’s important for the country to back its veterans who sacrifice for their country.