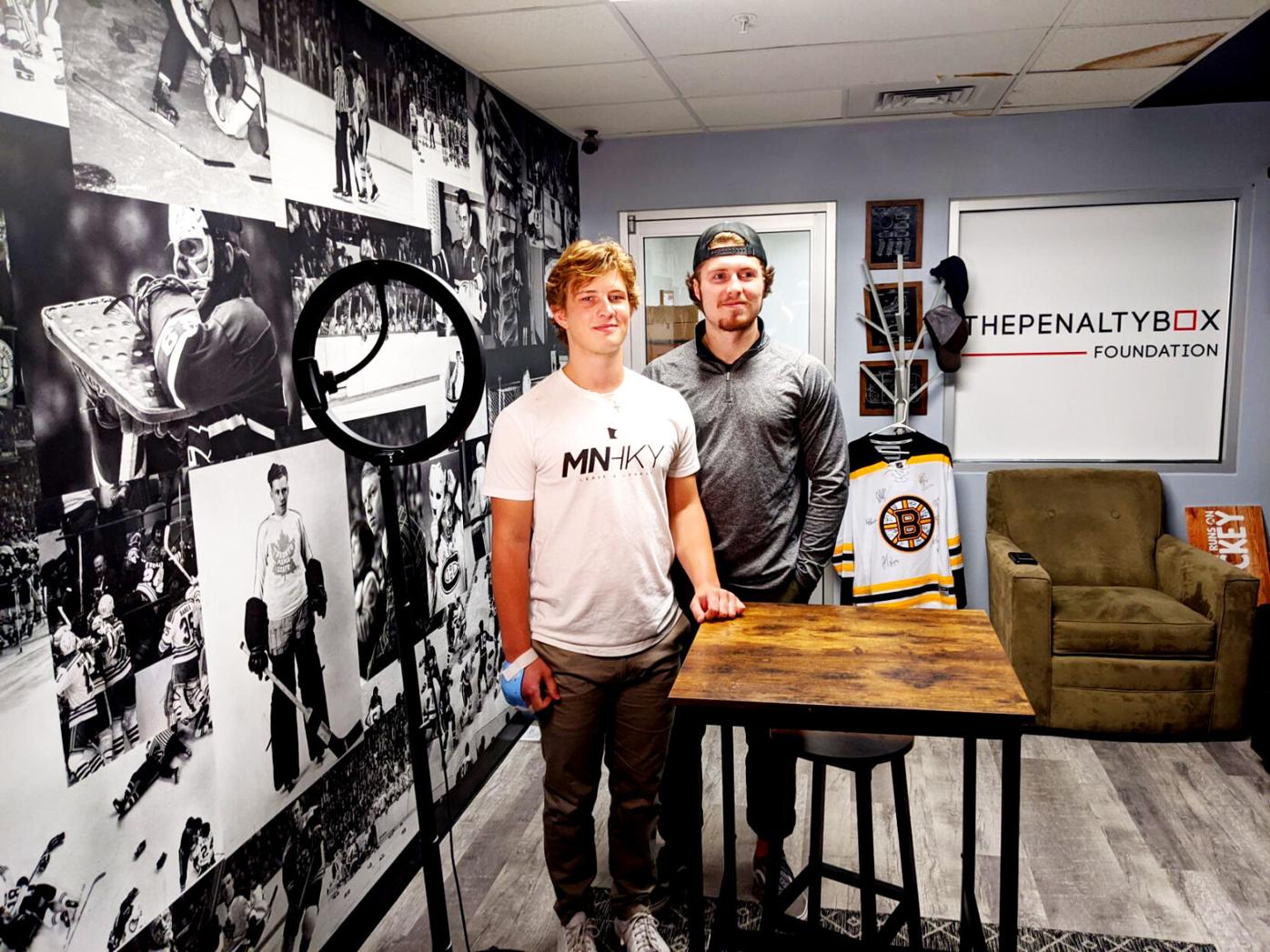 2018 Elk River High School alumnus Connor Bizal and 2019 St. Paul Adademy alumnus Adam Zukowski pose for a photo at Breakaway Ice Center in Tewksbury, Massachusetts after completing a PSA video for their foundation, The Fellowship of Hockey Alliance. Bizal and Zukowski founded the group for high school and junior hockey players who are seeking help and support off the ice. 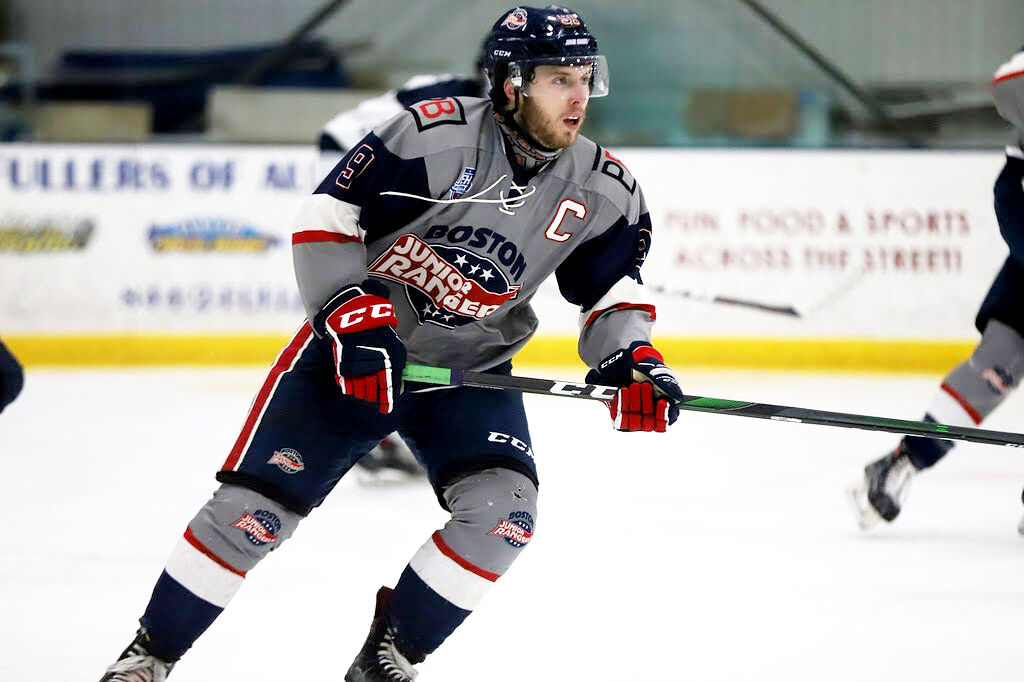 2018 Elk River High School alumnus Connor Bizal and 2019 St. Paul Adademy alumnus Adam Zukowski pose for a photo at Breakaway Ice Center in Tewksbury, Massachusetts after completing a PSA video for their foundation, The Fellowship of Hockey Alliance. Bizal and Zukowski founded the group for high school and junior hockey players who are seeking help and support off the ice.

After graduating from Elk River High School in 2018, former Elk River varsity hockey player Connor Bizal struggled with depression. That’s when he and a junior hockey teammate, Adam Zukowski, a 2019 graduate of St. Paul Academy, decided to form the Fellowship of Hockey Advancement.

The Fellowship of Hockey Advancement is a group for high school and junior hockey players to raise awareness for mental health issues and to help them navigate the stresses associated with both groups. Both Bizal and Zukowski played for the Boston Junior Rangers during the 2020-21 season.

“I had just transitioned from youth to varsity hockey,” Connor said. “I don’t know exactly what the reason was for me being so down. I was having a rough season. As the fall and winter went on, I started to realize that everything that snowballed from the start of the season. I felt so blue and gray all the time. I was kind of socially withdrawing myself from friends and just staying home in my room and just sat all the time. I was just crying, and it was like the first time I had ever felt that way, too. I slowly started to realize that I was going through everything that happens when you have depression. You don’t truly understand it until you go through it. I wouldn’t wish it upon my worst enemy. That was definitely one of the lowest times in my life. It’s something that a lot of people go through and that’s exactly why we’re doing this now.”

Connor and Zukowski met during their time playing for the Boston Junior Rangers.

“I had heard of him before because he’s from St. Paul,” Connor said. “Once I got out there, I had a lot of deep conversations with him after workouts or after practice. We found out that we had really similar paths. That started us creating FHA.”

One of Connor’s greatest mentors is his former personal sports psychologist Shaun Goodsell. Goodsell, who is based in Boston, is the president/CEO of the Mental Edge, a company that specializes in training young athletes. Goodsell is an Elk River native.

Goodsell said Connor is one of the brightest young men he has ever known in the 23 years since he founded Mental Edge.

“In my career in the sports mental skill area, I’ve worked with over 2,000 individual athletes,” Goodsell said. “I don’t know if I’ve met a finer young man than Connor. It was just a pleasure and an honor. I really enjoyed working with him.

“When I first met Connor, we worked specifically on how to help him increase his level of confidence, be more kind to himself related to his play. As time went on, we talked more about life and how to deal with the challenges that come up in life. As we got closer and closer in our relationship, he would trust me with more personalized information to the point where we were able to talk about depression, just talk about mental health issues and we grew very close. We became a team between the two of us. He trusted me with a lot of life situations and help him grow.”

“I didn’t really talk about it to my coaches and my teammates,” he said. “Looking back at it, that was a mistake. Especially with Gus [coach Gustafson]. I know him so well that I should’ve felt comfortable enough talking about it and for some reason, I didn’t. That was a mistake.”

Terry Bizal said Connor has learned a lot since he graduated from high school three years ago.

Connor Bizal said COVID-19 has created challenges for people all over the world.

“In the hockey world, it’s messed everything up. There was this whole trickle-down effect where guys were playing on teams they probably wouldn’t have imagined they’d be playing at. I’m one of them, too. I know a lot of players who are committed to playing Division I hockey who are telling me how miserable they are, like how down they are on themselves. You think, why would they be sad? They have everything that I wish I could have. That’s just how it is: It doesn’t matter how good of a hockey player you are, you’re going to go through some tough times and face some adversity and you can’t avoid it.

Bizal said he founded the fellowship of hockey alliance so that other youth hockey players don’t have to deal with their issues on their own.

“That’s why we’re doing FHA,” Connor said. “Adam and I have gone through every single scenario that you can basically imagine when it comes to hockey. We’ve had to deal with the tough times and face adversity. We just want players to know that they’re not the only ones going through them. ... We want guys to not go through what we went through. That’s why we’re doing it.”